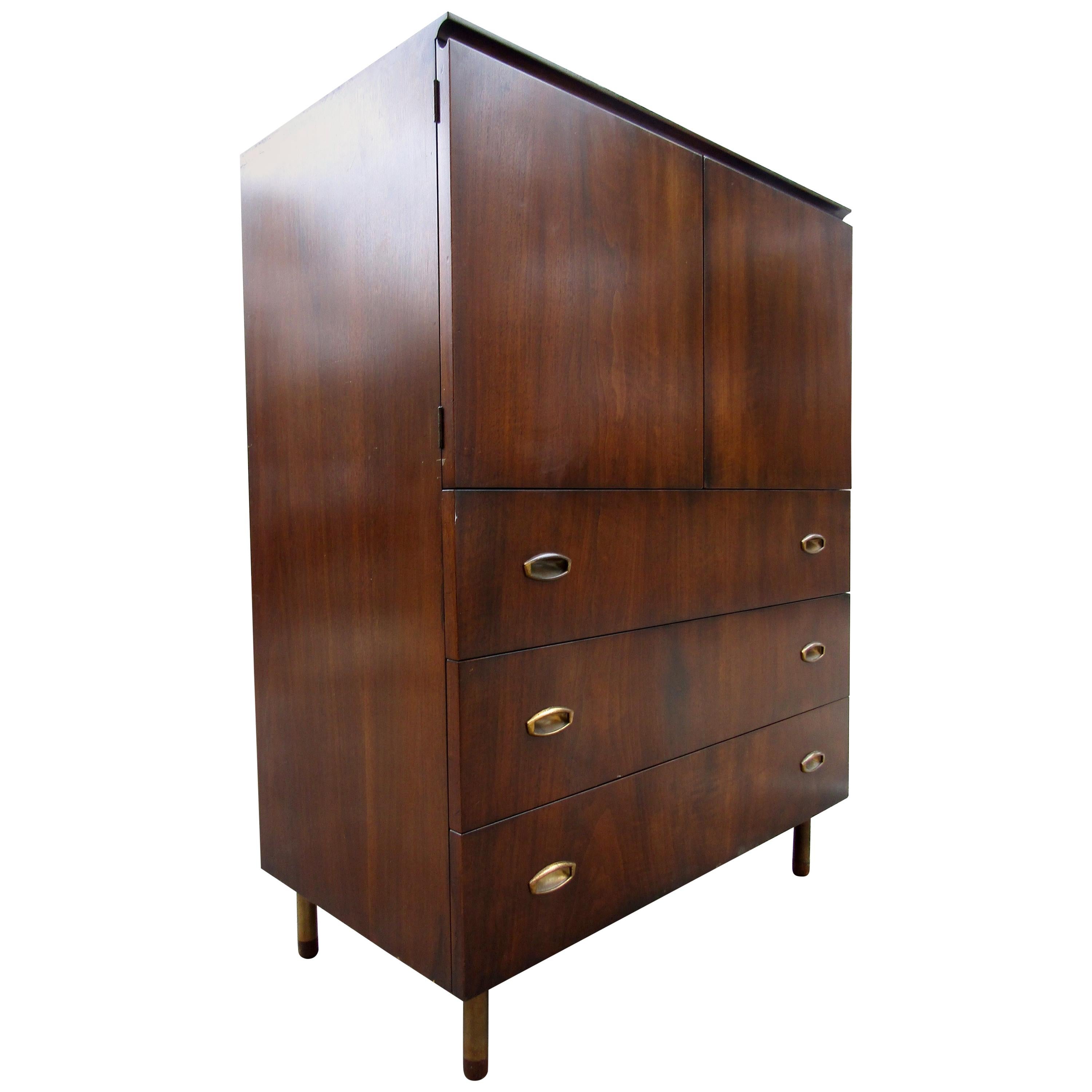 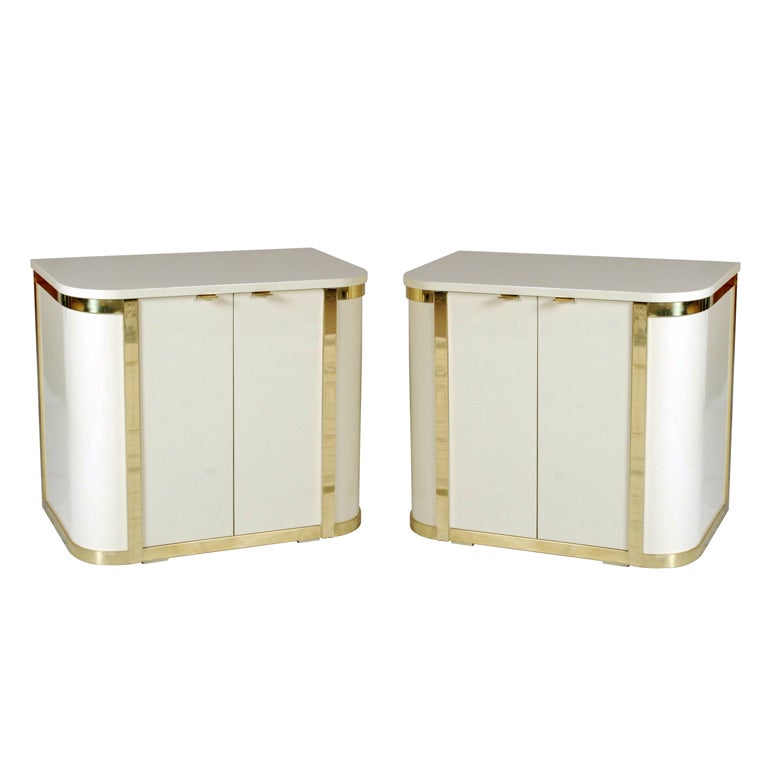 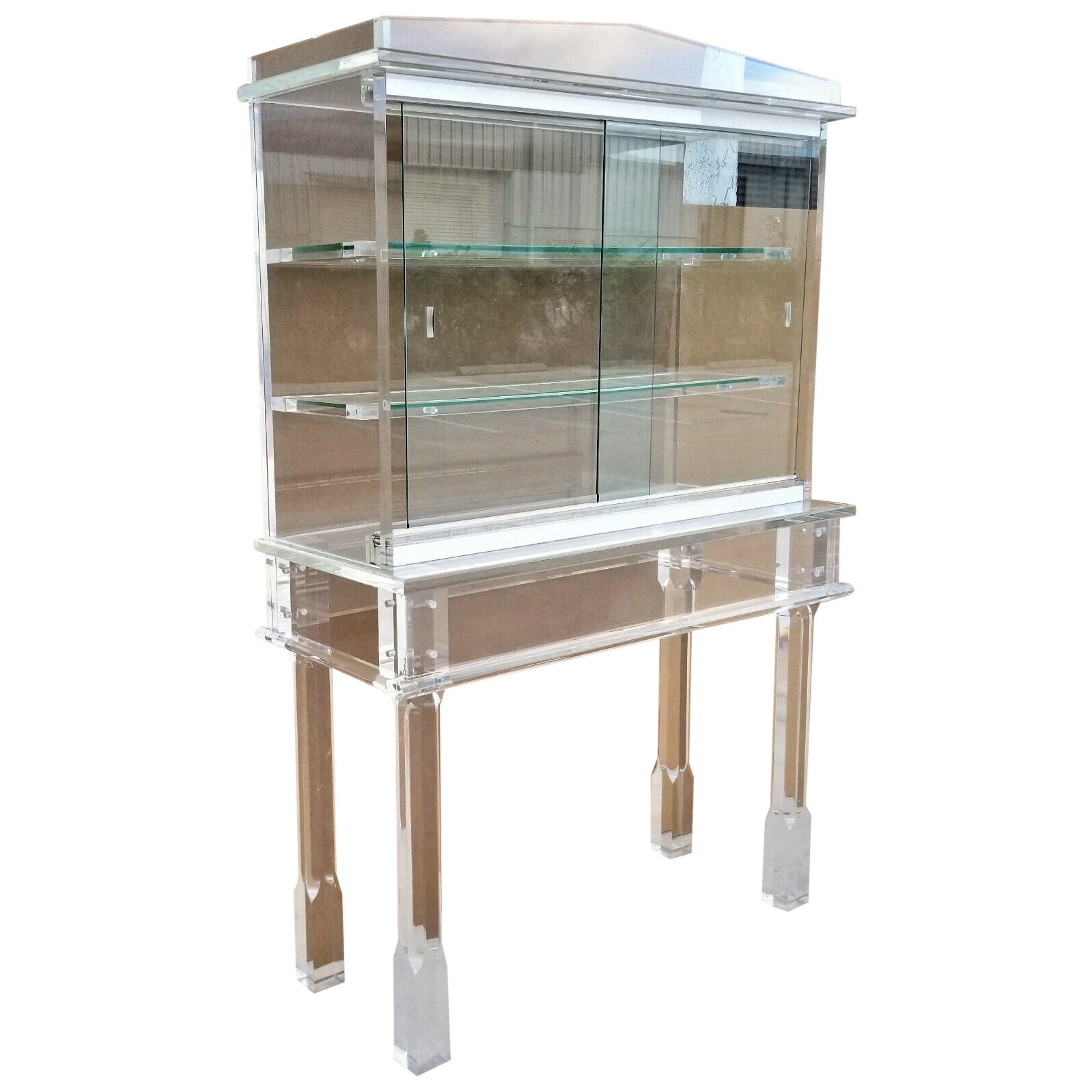 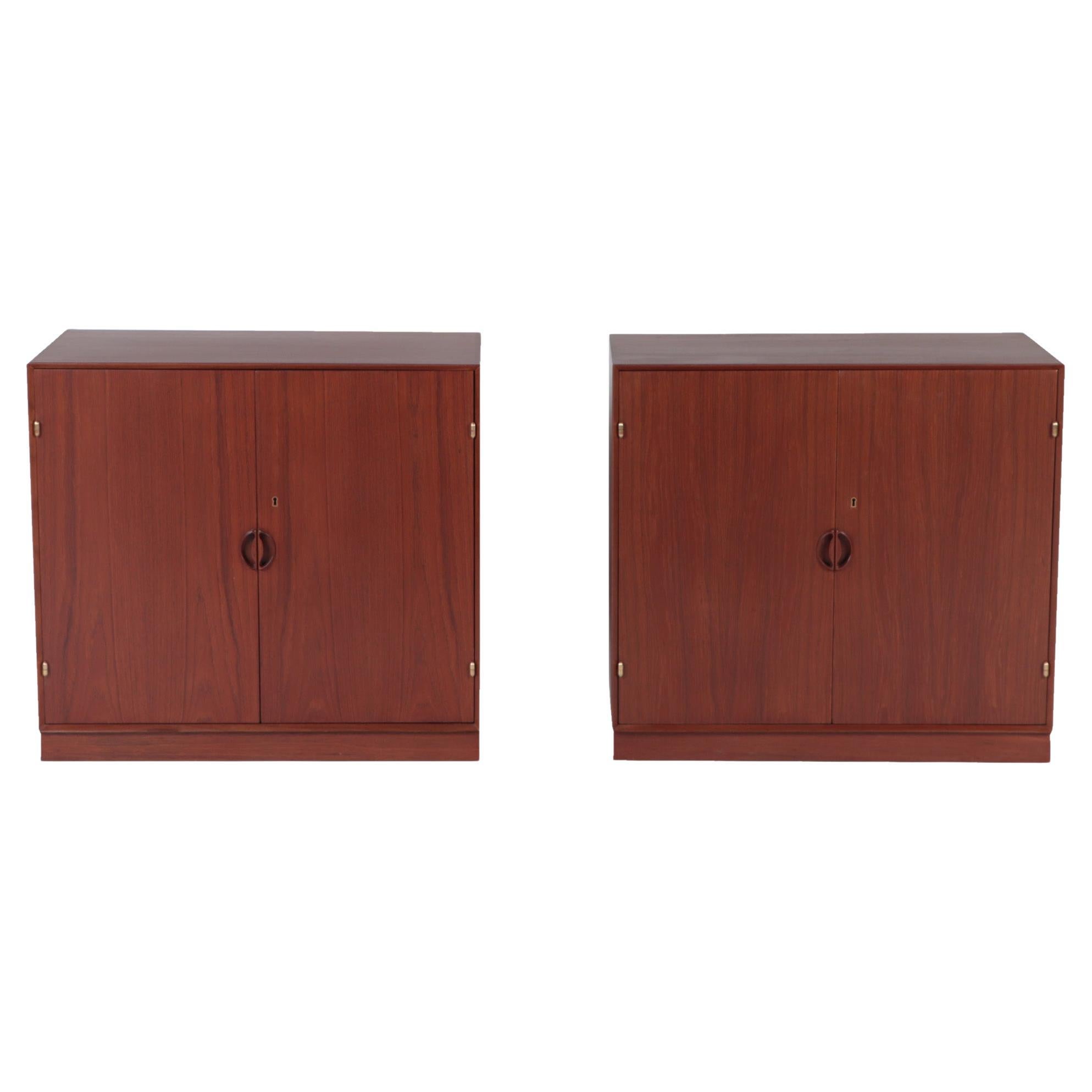 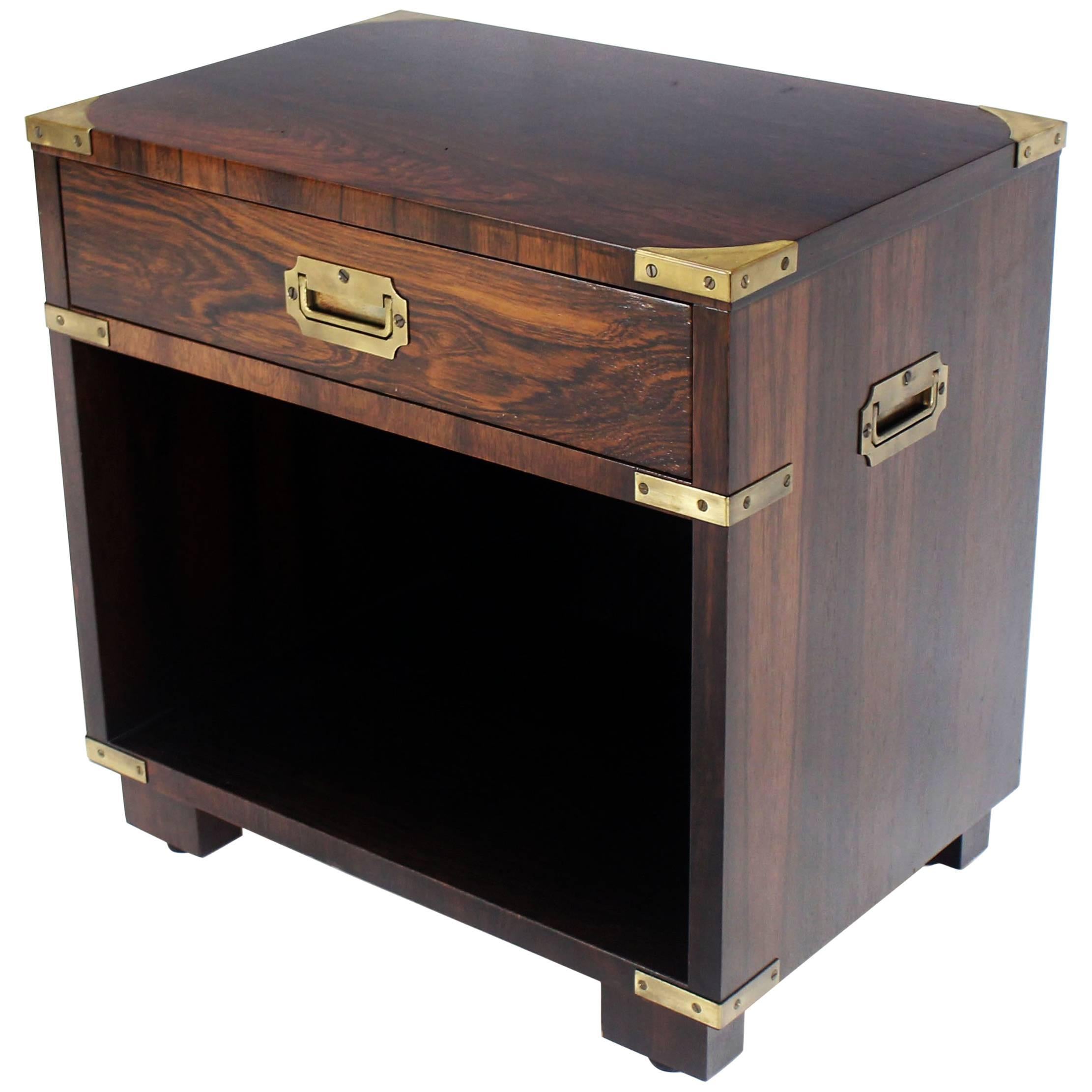 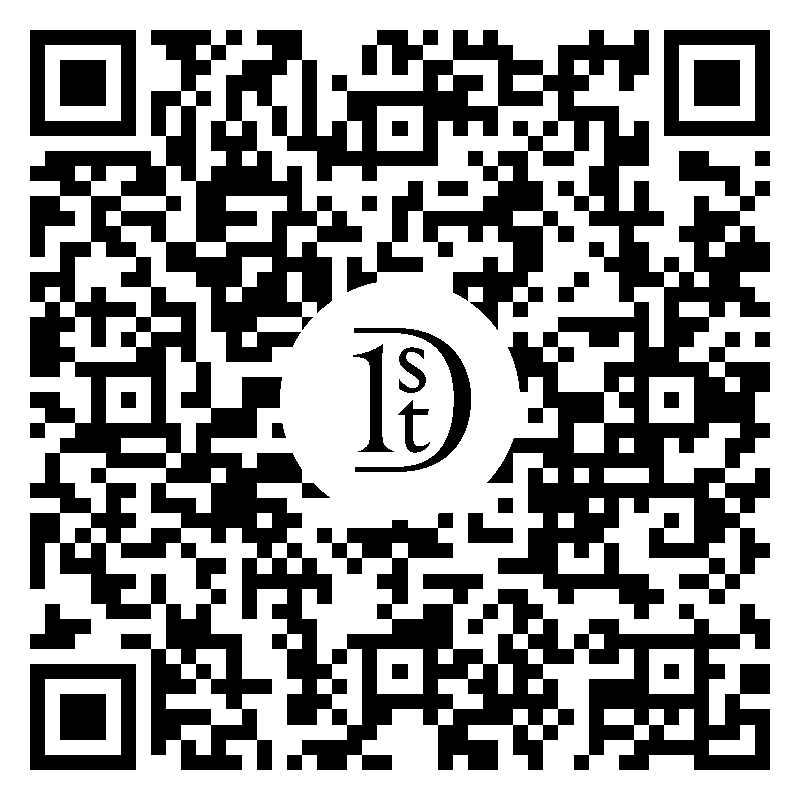 Offering One Of Our Recent Palm Beach Estate Fine Furniture Acquisitions Of A Vintage 3 Piece Faux Goatskin Display Etagere Bar Cabinet Set by JOHN STUART of Grand Rapids Featuring brass trim on the sides and fronts, all (glass and wood) adjustable shelves, and a lit center cabinet. Approximate Measurements in Inches Each Cabinet: 78" high x 36" wide x 20" deep Condition Report Very well-built pieces. Made of solid wood, they are structurally sound and sturdy. There are a few small spots of light wear to the outside finish which are visible upon close examination. 2 glass shelves have a small chip on their front corner as shown. The photos are an important part of the item description and condition so please use the zoom feature to view them closely. We have many other similarly styled furniture pieces listed. To see them, scroll down and click on VIEW ALL FROM SELLER, where you can see them and follow us to be notified whenever we post new items. We appreciate your business and will do everything possible to make sure you are a happy customer. Local delivery and pickup available. 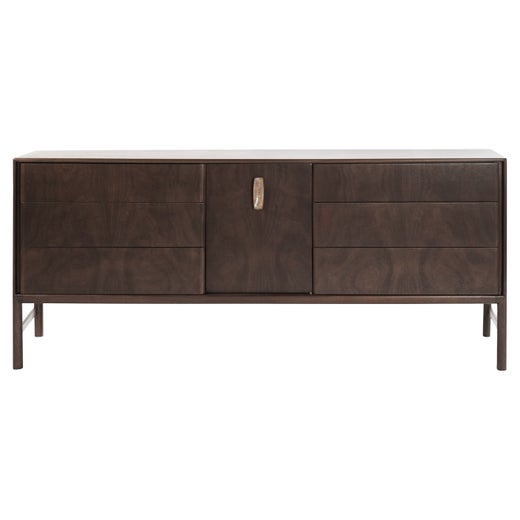 Grand Rapids, Michigan, was once known as “Furniture City” for its local mass-production industry that flourished from the mid-19th century into the early 20th century, led by furniture manufacturers like John Stuart. Stuart’s eponymous company, which would build showrooms in New York and Philadelphia, designed and sold elegant reproductions of various furniture styles, including 18th-century French and English furniture as well as what we now call mid-century modern home furnishings built by European craftsmen in the entrepreneur’s Grand Rapids factory.

In 1845, a British cabinetmaker named George Widdicomb arrived in New York before moving to Grand Rapids. There he set up a small cabinet shop in 1857 with a dozen craftsmen, including his son John Widdicomb. The store quickly found success due to Widdicomb’s English training and the dearth of other quality furniture makers in the region. Toward the end of the 19th century, Grand Rapids had earned an international reputation as a leader of American furniture manufacturing, and while the Widdicomb family would navigate some difficulty after the Civil War, they emerged anew as Widdicomb Brothers and Richards, and then the Widdicomb Furniture Company. Widdicomb’s son started his own company in 1897, the John Widdicomb Company, and in 1929, the Grand Rapids–born John Stuart joined the company as a director.

Stuart, who had been in the furniture industry since 1913, was named president of John Widdicomb Company in the early 1940s and by then had formed John Stuart, Inc., with partner Herbert M. Rothschild. John Stuart, Inc.’s offerings included oak buffets and other dining-room furnishings crafted in the Tudor and Elizabethan styles, with cabinet doors and drawer fronts characterized by meticulously carved natural-world motifs and other decorative flourishes. Stuart also oversaw the design of reproductions of sophisticated walnut and mahogany Queen Anne side tables and dining chairs, with the latter marked by pronounced, vase-shaped curves in the back splats and cabriole legs. In 1952, the manufacturer and distributor’s founder sold the business, including the right to trade under his name, to the John Widdicomb Company.

1stDibs Buyer Protection Guaranteed
If your item arrives not as described, we’ll work with you and the seller to make it right. Learn More
About the Seller
5.0
Located in Lake Worth, FL
Platinum Seller
These expertly vetted sellers are 1stDibs' most experienced sellers and are rated highest by our customers.
Established in 2003
1stDibs seller since 2021
55 sales on 1stDibs
Typical response time: 1 hour
More From This SellerView All
People Also Browsed
You May Also Like