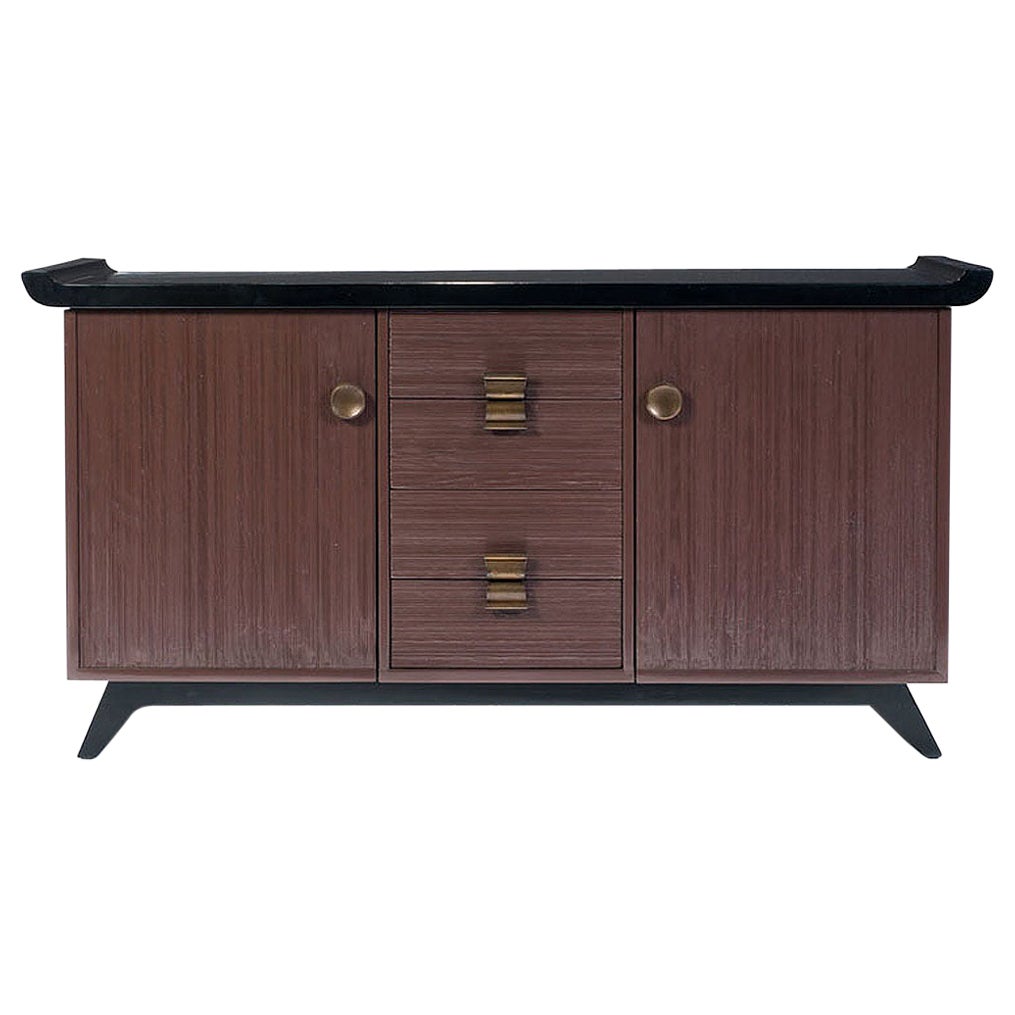 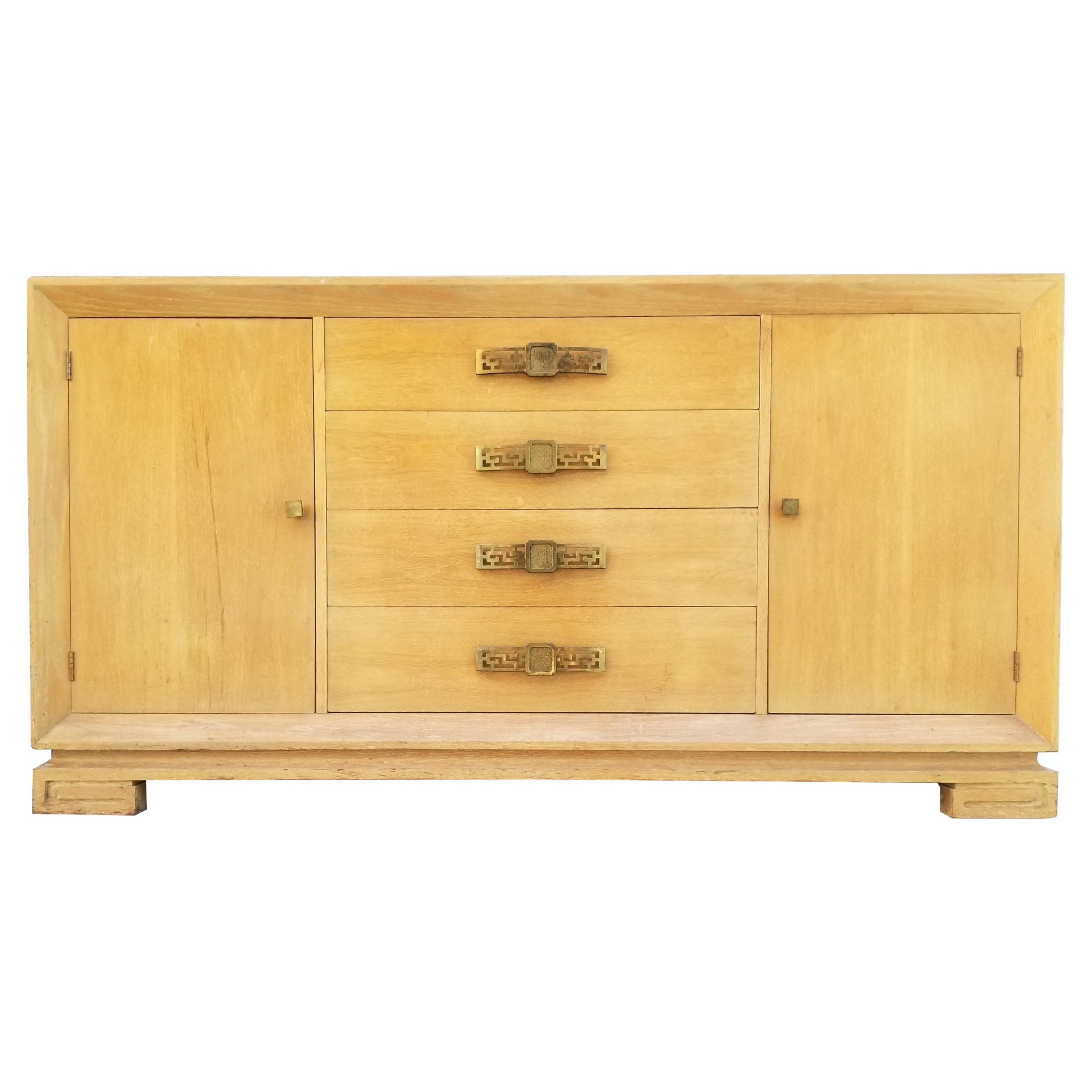 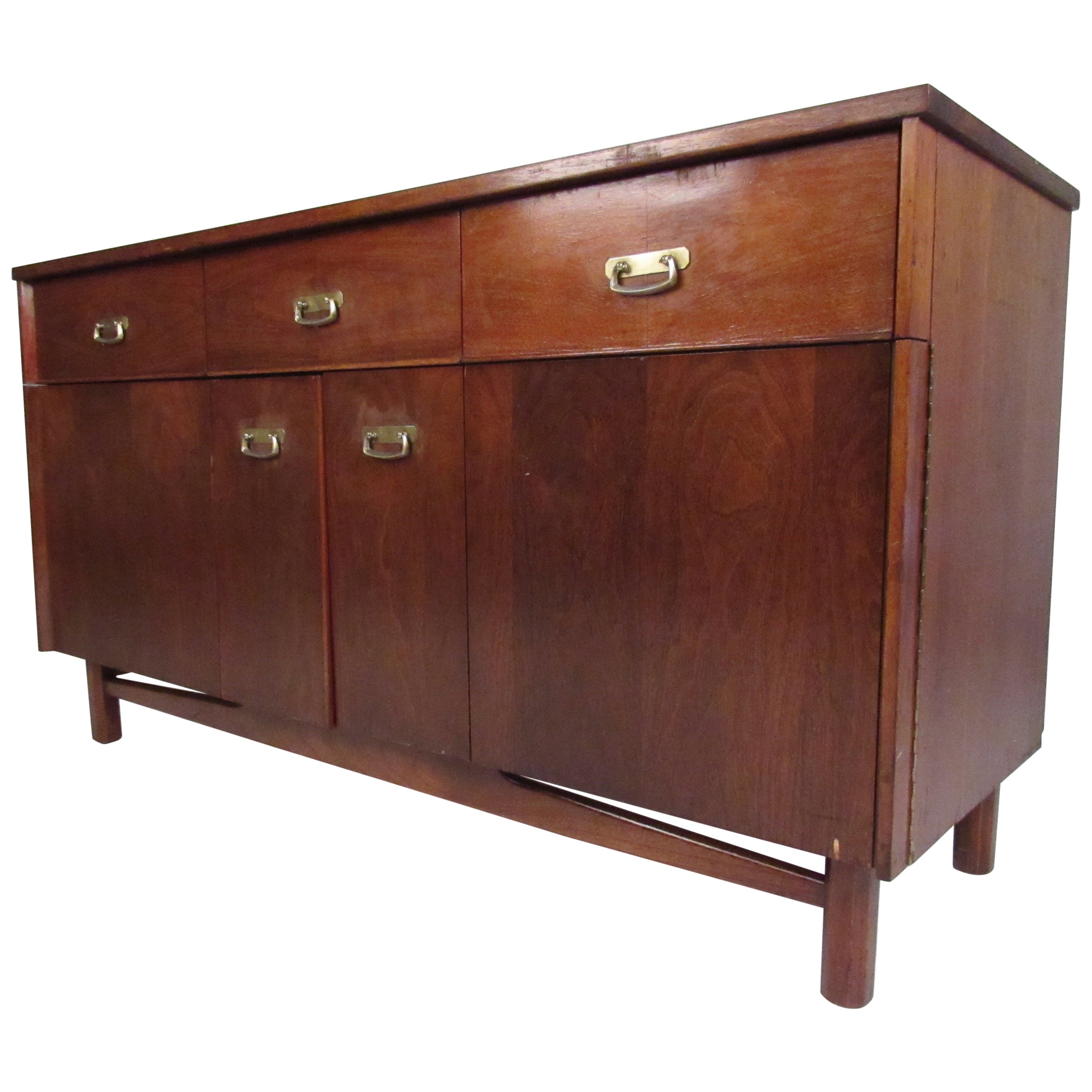 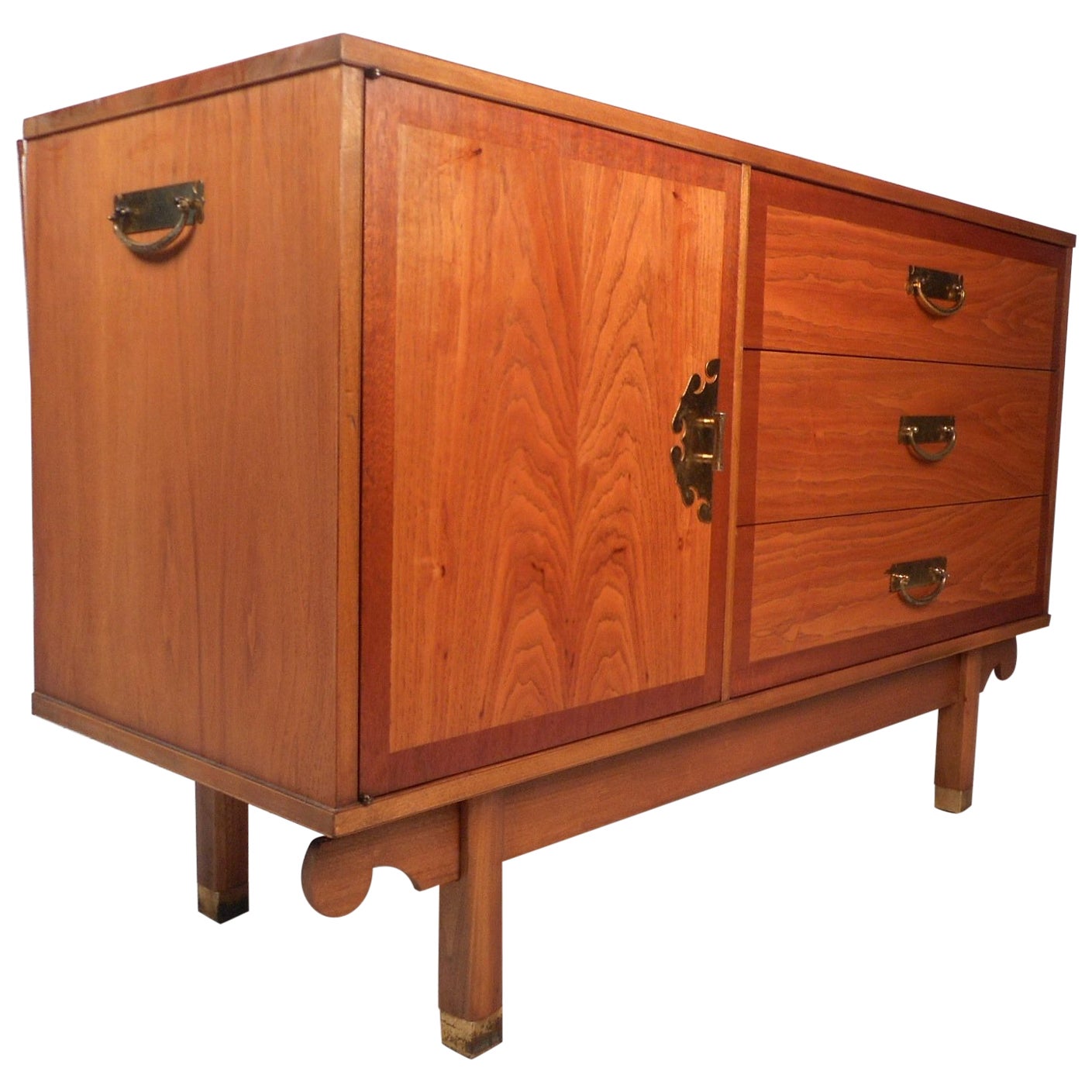 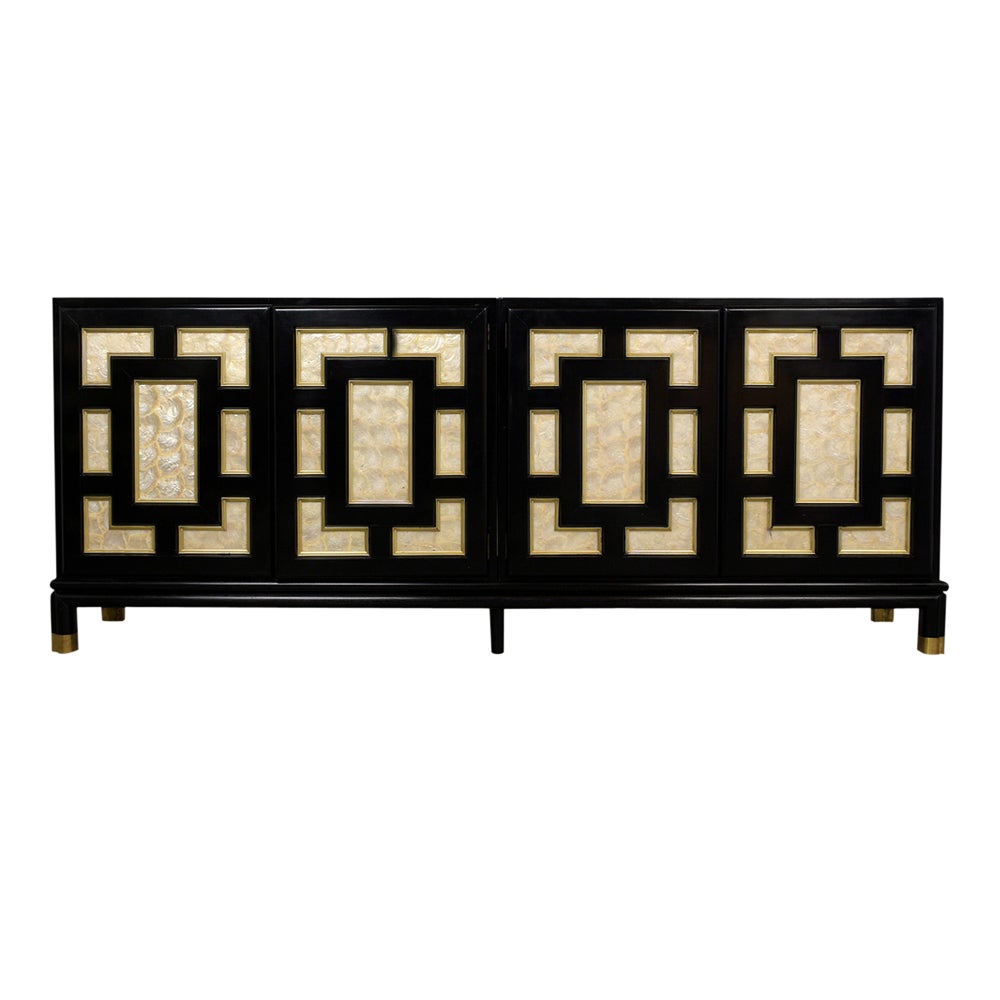 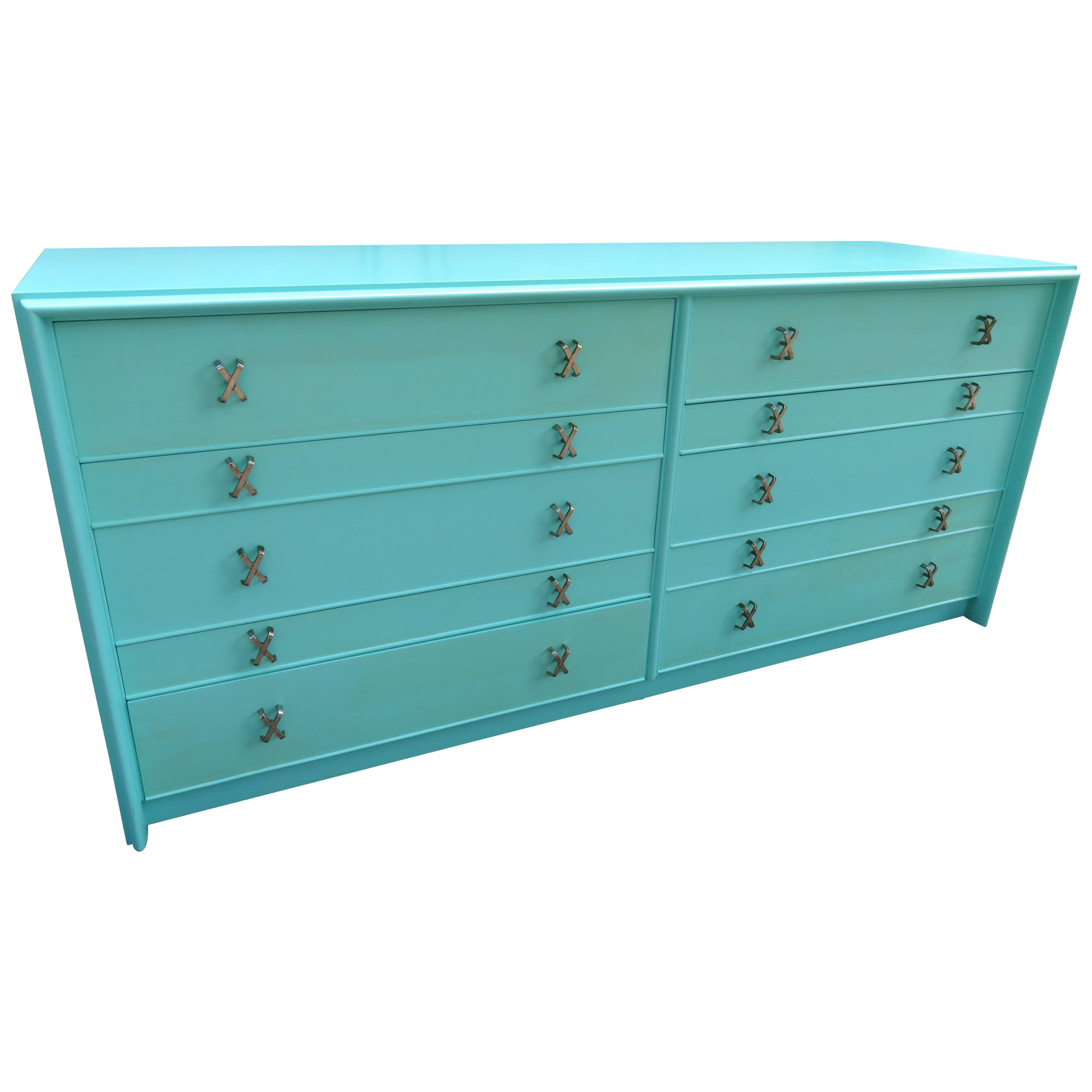 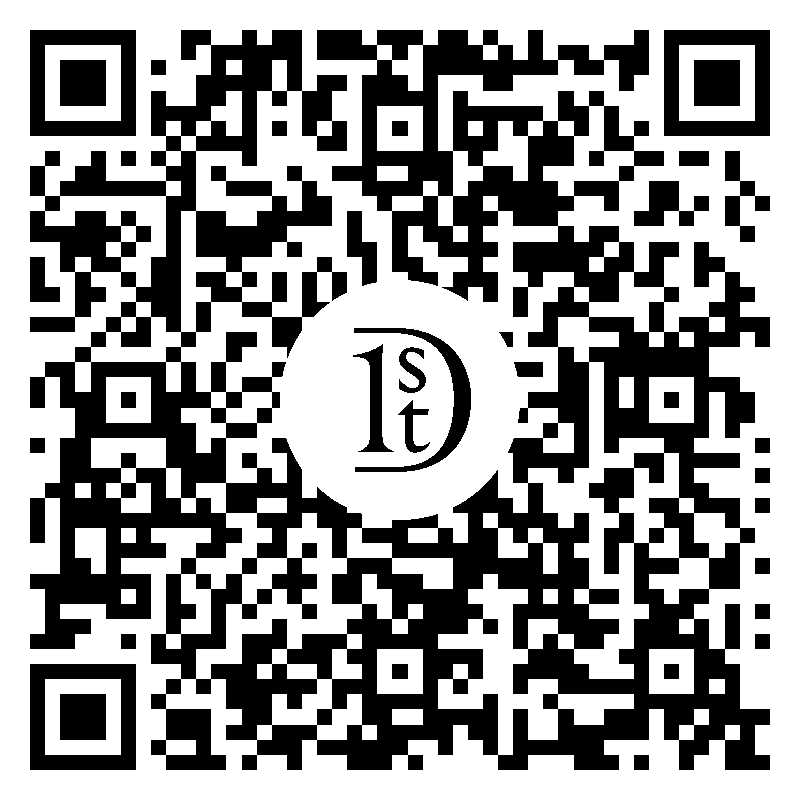 Mid-Century Modern combed fir credenza designed by Paul T. Frankl for Brown-Saltman. Quality craftsmanship with solid wood construction and dovetail detail. Brown-Saltman ink stamp on back. In good, original vintage condition with original finish. Displays beautifully, but this is not a refinished piece in perfect condition. Shows its history and age with patina, various scuffs and scratches. Base has been reinforced/repaired with steel L brackets. Both wood shelves are not original. For a buyer seeking an iconic, quality piece with character and patina, imperfect with age-appropriate wear. Paul T. Frankl: After Frankl completed his architectural studies at the Berlin Polytechnic, he traveled, spending time in Berlin and Copenhagen before arriving in the United States in April 1914. He settled in New York City and brought with him an outsider’s fresh perspective and an enthusiasm for forging a uniquely American design aesthetic. Frankl began as an architect and later switched to designing and painting fine art and furniture. In the years between the two world wars he, more than any other designer, helped shape the distinctive look of American modernism. Paul T. Frankl. "Skyscraper" Step Table, late 1920s Brooklyn Museum In the 1920s, he introduced his celebrated skyscraper style (before turning to metal furnishings in the 1930s). Frankl opened Frankl Galleries on 48th Street, calling his company Skyscraper Furniture, which became an epicenter of American modernism, including modern textiles and wallpapers imported from Europe. His solo art shows included New York City's Knoedler Gallery in 1931 and Los Angeles's Stendahl Gallery in 1944. After he later relocated to Los Angeles and opened a gallery on Rodeo Drive in Beverly Hills, celebrities such as Fred Astaire, Cary Grant, Katharine Hepburn, Walter Huston and Alfred Hitchcock became clients. Frankl wrote several books and magazine articles about the Modern Style and was its most vocal proponent. He established the American Union of Decorative Artists and Craftsmen (AUDAC) in 1928. He later designed production pieces for Brown Saltman of California and Johnson Furniture Company of Grand Rapids, incorporating an early use of biomorphic designs and novel materials such as cork veneer. His style continuously evolved, from early skyscraper furniture to relaxed and casual designs favored by the Hollywood elite in the 1930s to manufactured pieces for the mass market in the 1950s. In 1934 he moved to Los Angeles where he taught at the University of Southern California and the Chouinard Art Institute. Used, out-of-print books he authored sell for hundreds of dollars in online bookstores. His daughter, Paulette Frankl, is an artist, author and photographer, and his grandson, Nicholas Koenig, is a creative director for theme parks and interactive games. Source: Wikipedia. 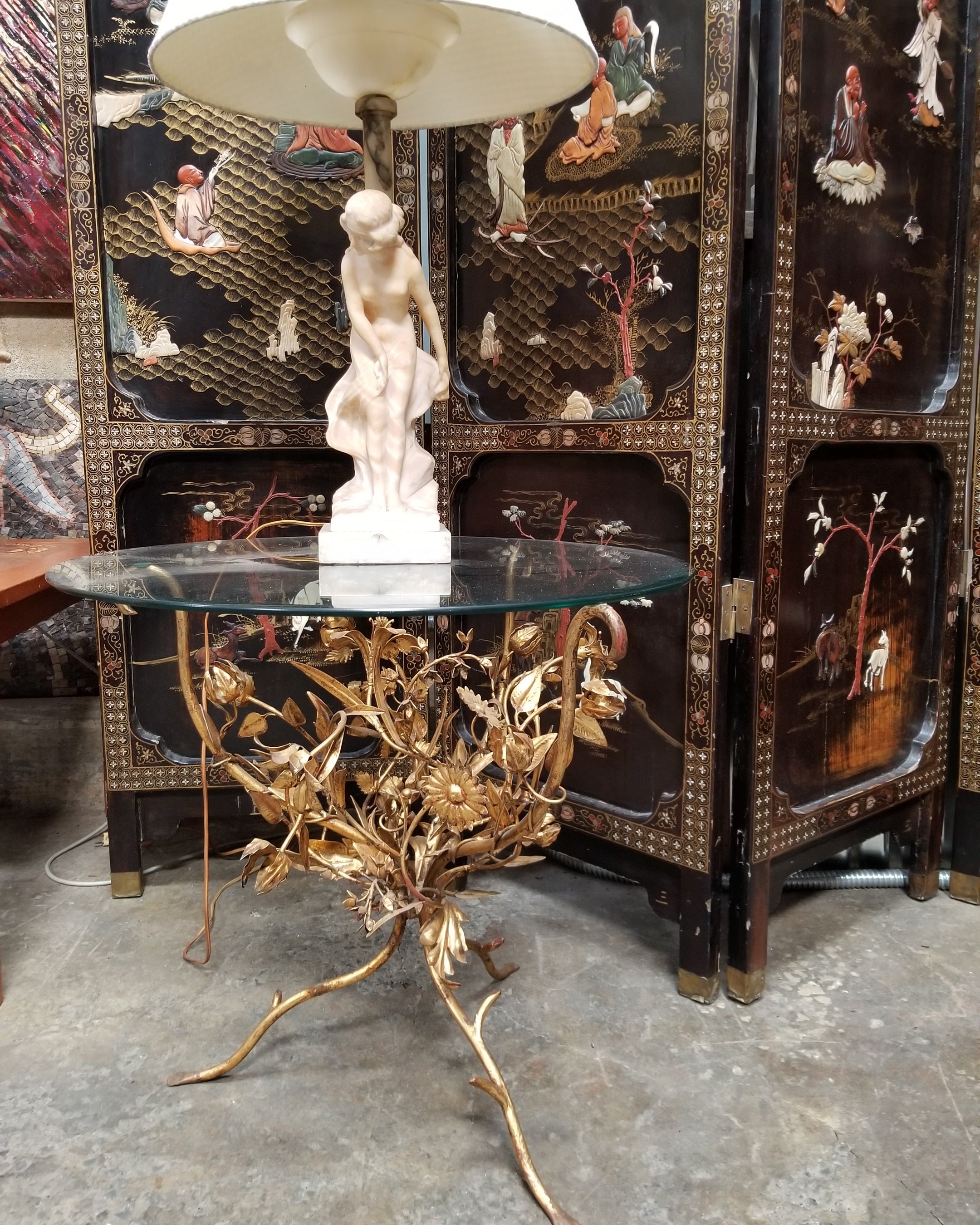 About the SellerNew to 1stDibs
Joined in the past six months.
5 / 5
Located in Fulton, CA
Platinum Seller
These expertly vetted sellers are 1stDibs' most experienced sellers and are rated highest by our customers.
Established in 1978
1stDibs seller since 2020
11 sales on 1stDibs
Typical response time: 1 hour
More From This Seller
View All From Seller

$1,900
Small Mid-Century Modern Credenza
Located in Brooklyn, NY
This beautiful vintage modern buffet has plenty of room for storage within its three drawers and hidden compartment with a shelf. Sleek design with brass pulls on each drawer and cab...
Category

$1,600
Mid Century Modern Ebonized Credenza
Located in Los Angeles, CA
This is a lovely Mid Century two-section Server that is made out of solid wood and is newly stained in deep black color with a lacquered finish. Features 4 doors with a geometrical d...
Category