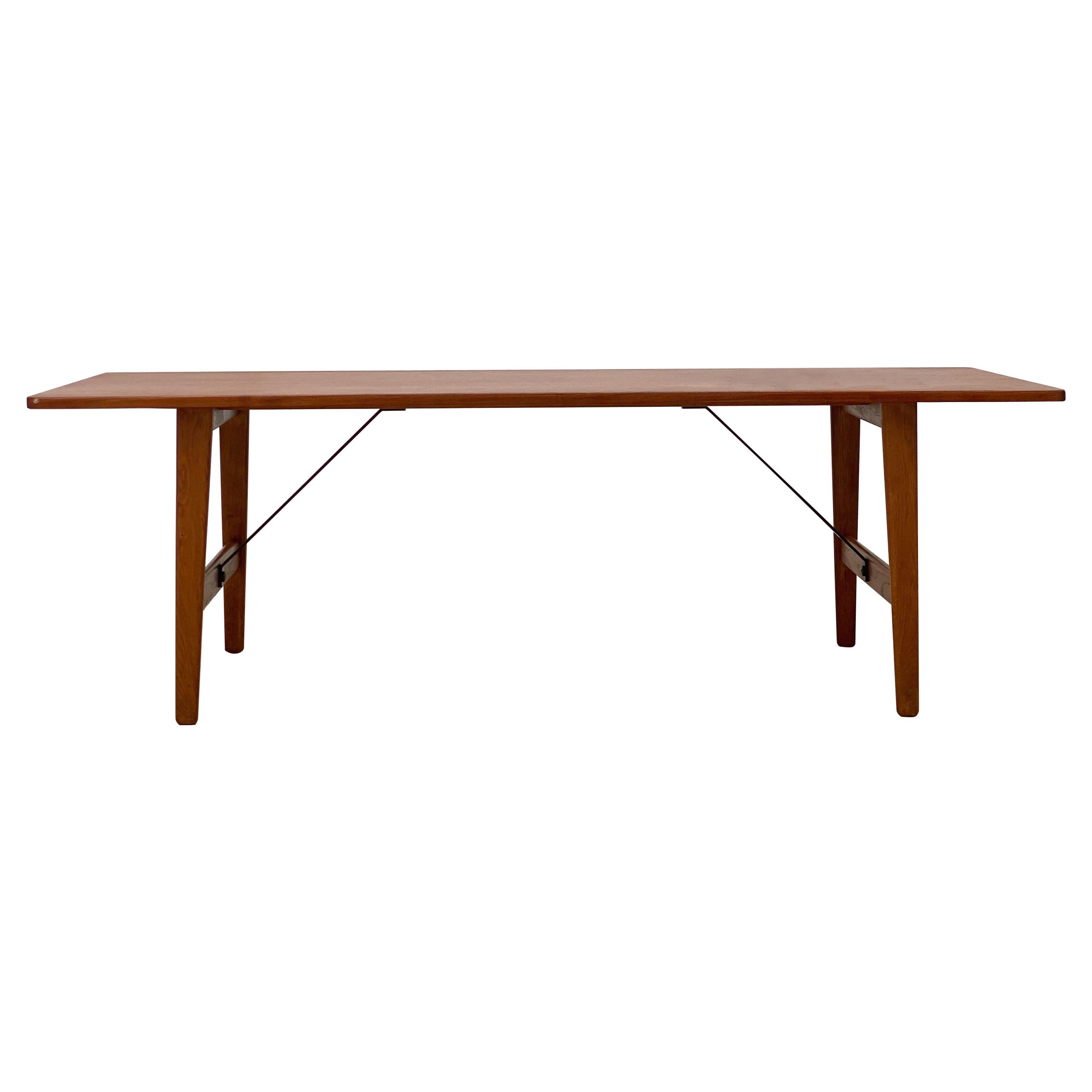 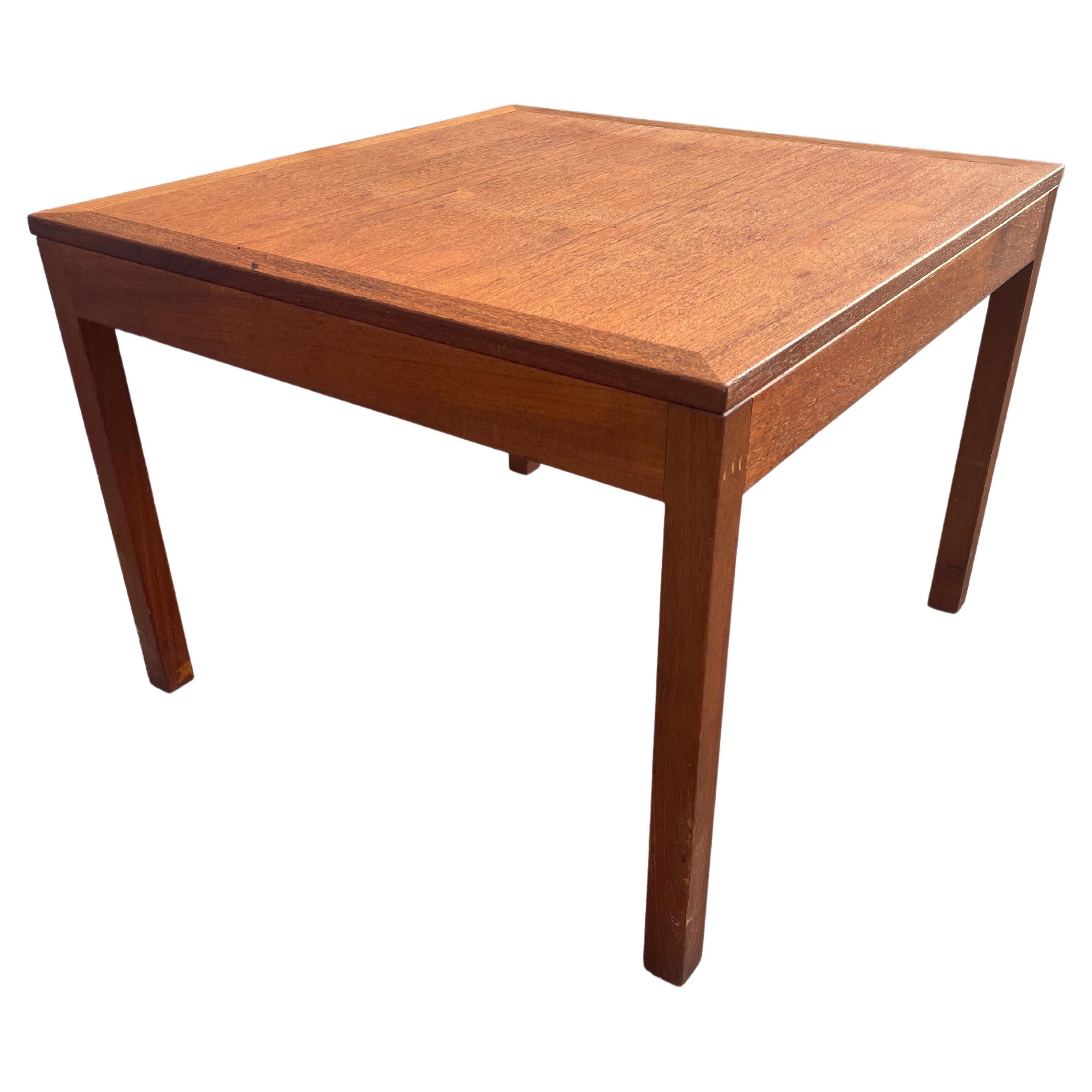 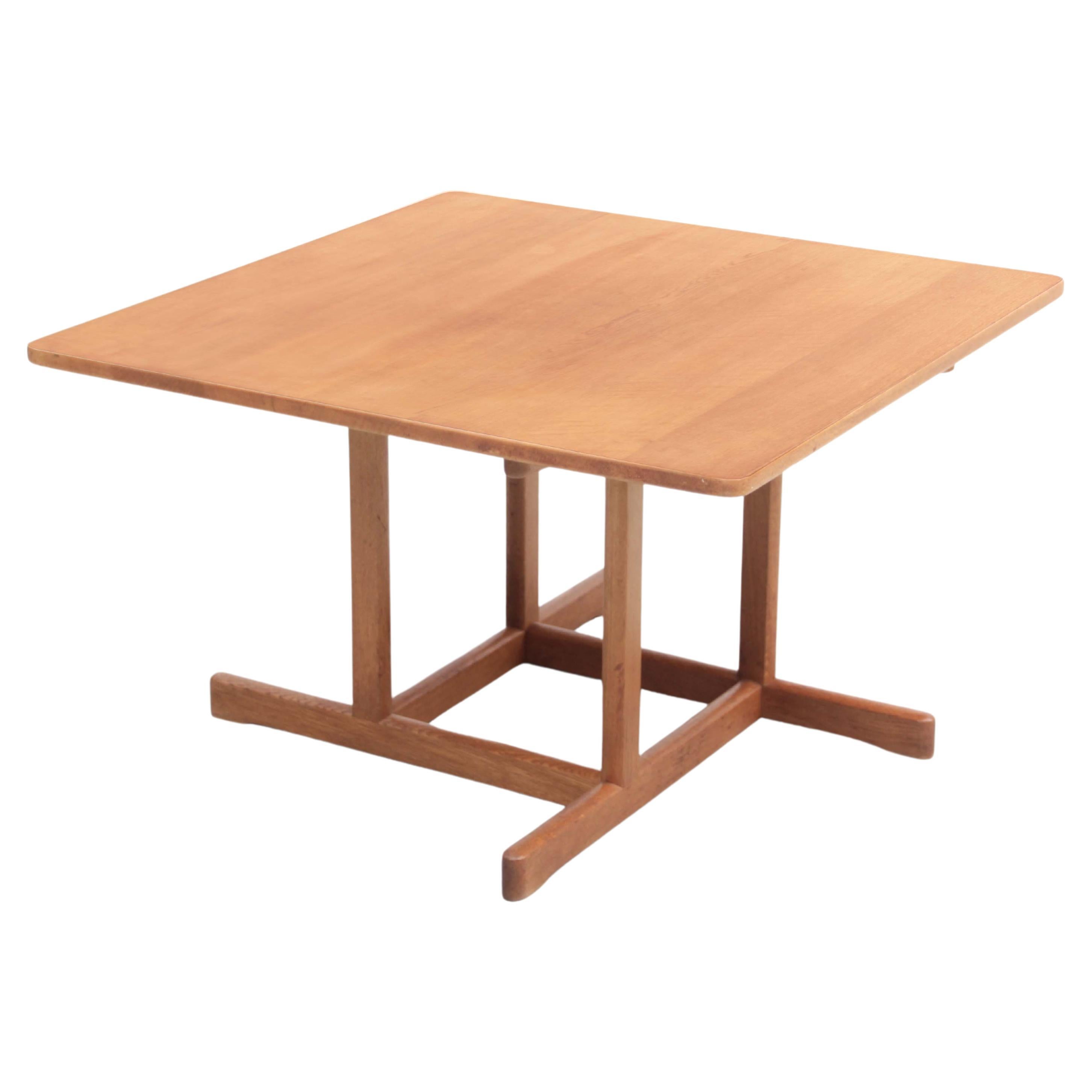 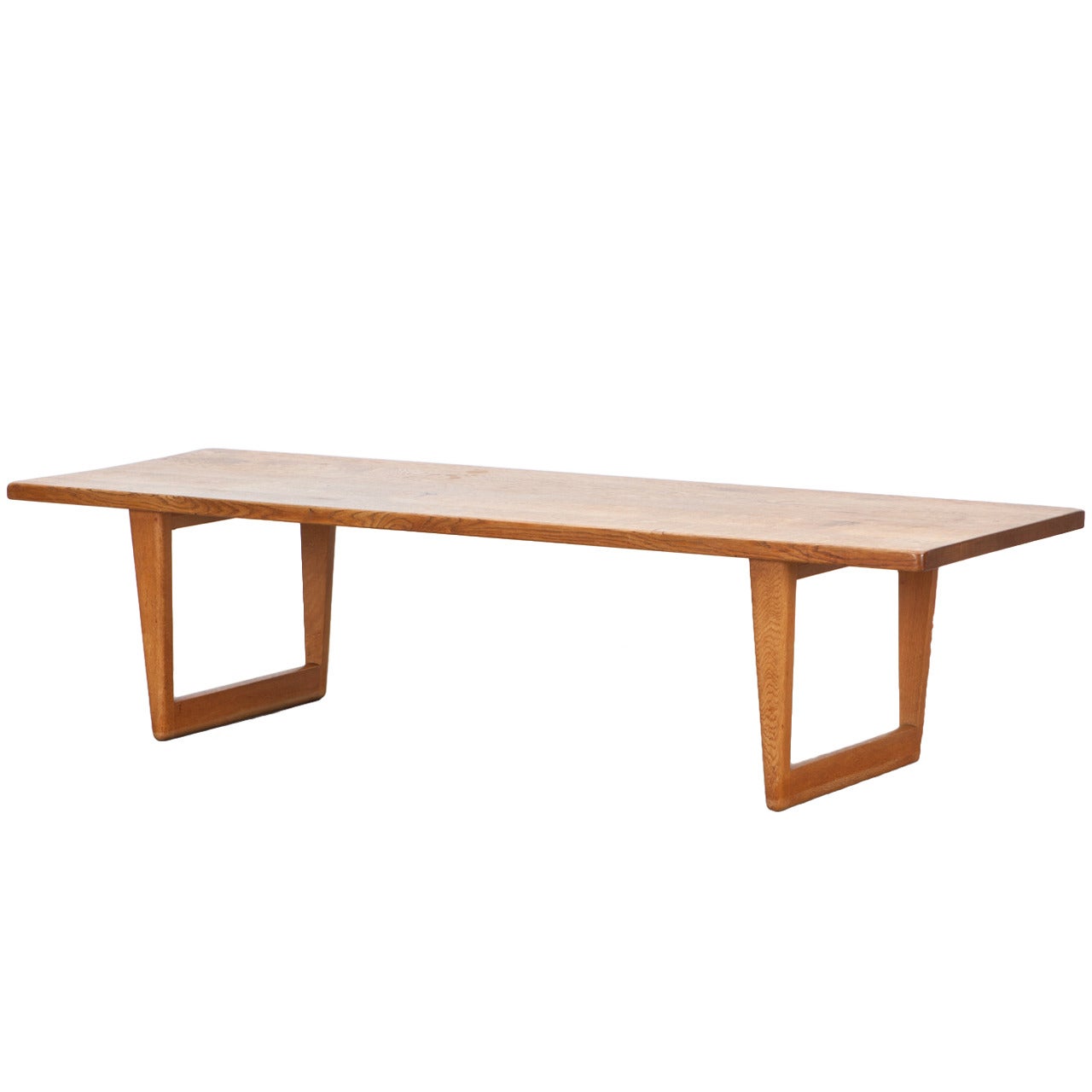 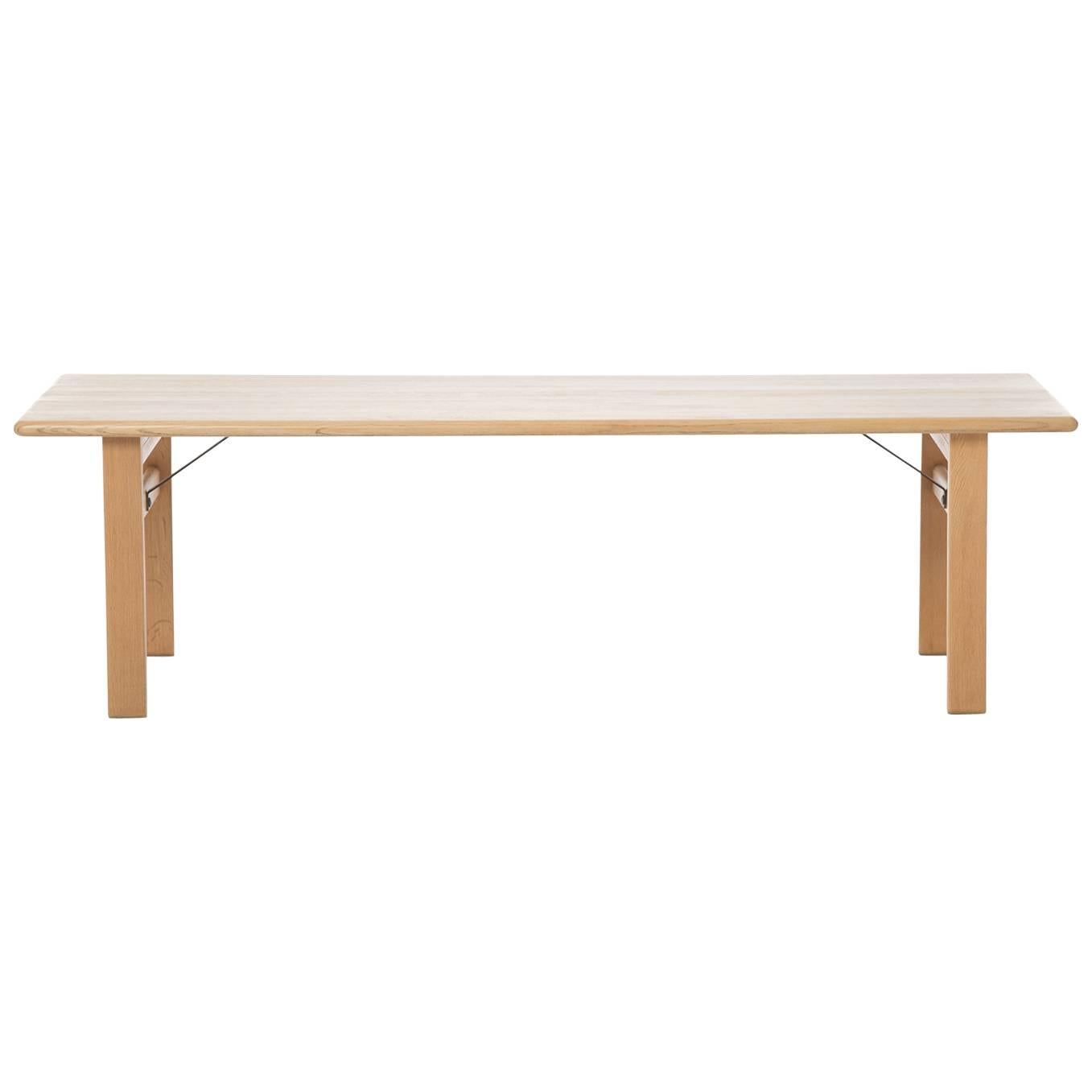 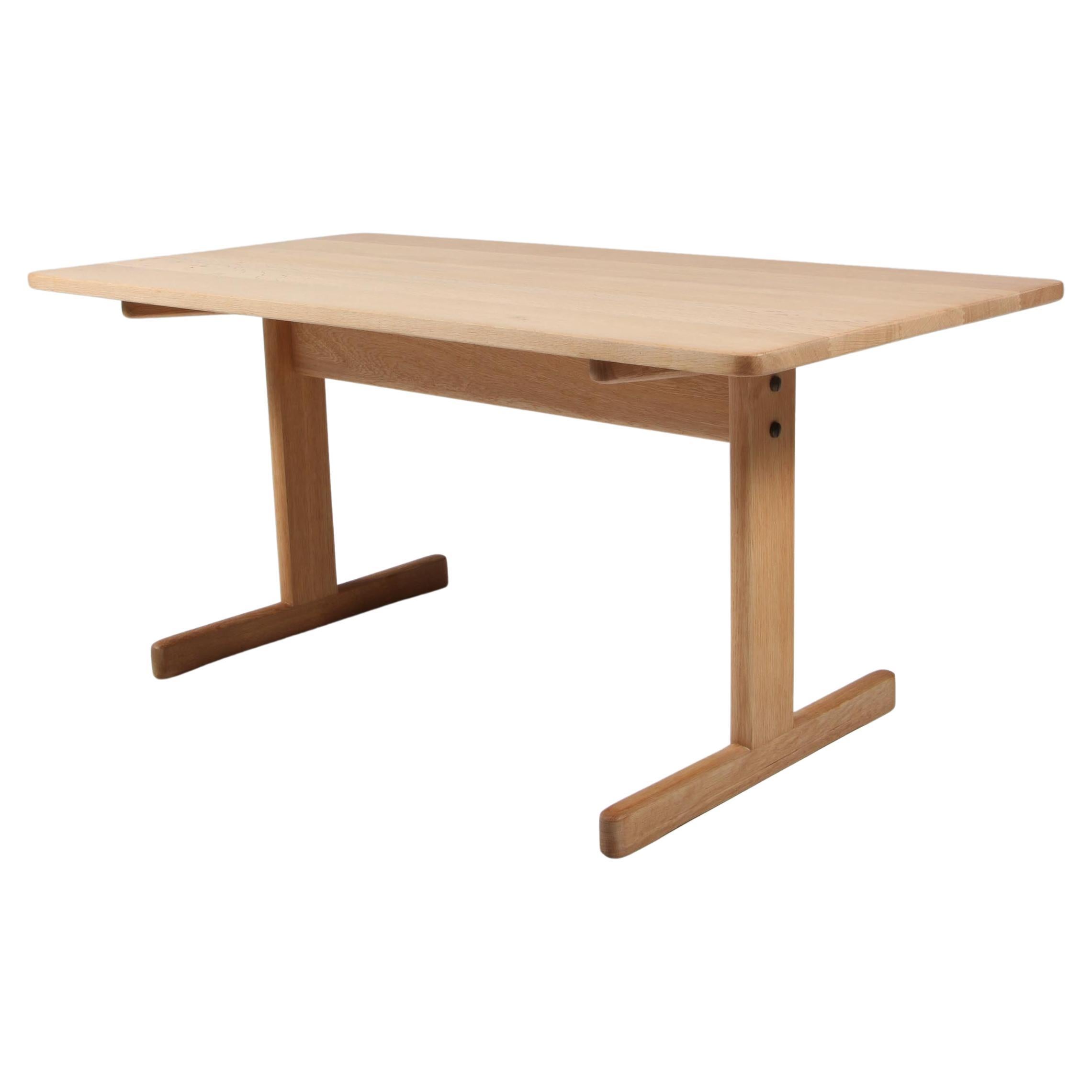 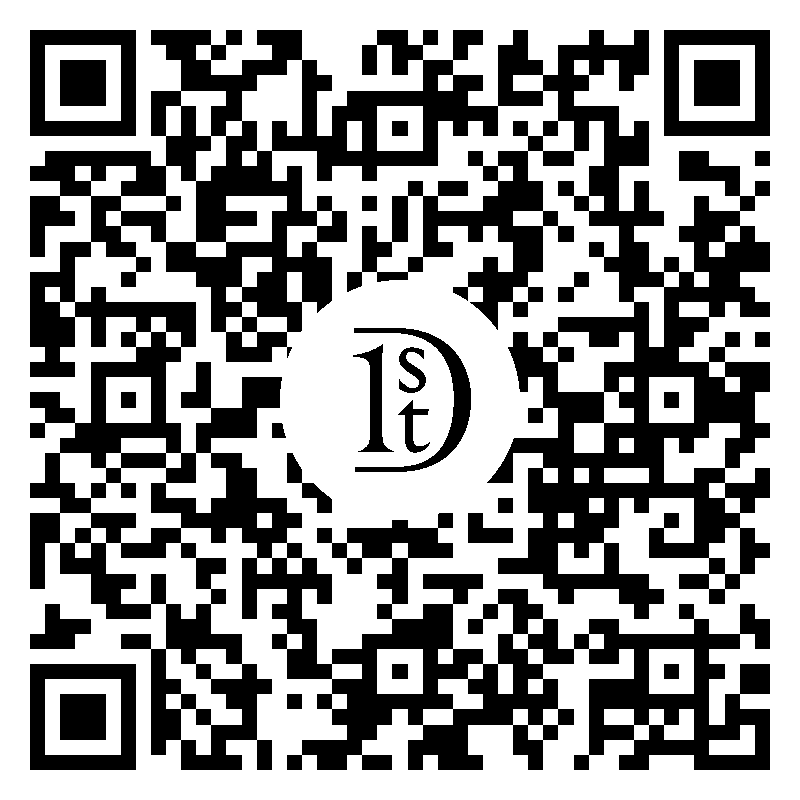 1956 design table by Børge Mogensen, manufactured by Fredericia Stolefabrik. This vintage Scandinavian table is beautiful in design, in great condition and it can be used for all kinds of purposes. The most logic would be to use it like most Europeans would in the 1950s (and still today). Tables of this shape are mostly used as sofa/coffee tables standing free in front of a couch. This undeniably cool table comes with a wonderful natural grain in the wooden tabletop and the striking legs underneath too are an absolute joy to watch. This slick design and excellent quality table is as stable as the day it was made, in very good condition and immediately ready for you to use and enjoy. Mind you, perfect packing and free delivery from our store to your door in just 4 days is included in our already sharp price. Maximum width x height x depth: 63 x 17.3 x 23.5 inches. We have a passion for the unique, for quality, for stylish yet practical and for craftsmanship of years gone by. Your purchases will be extremely well packaged and we look forward to serving you (again). You can shop all our 800+ listings on 1stdibs by pushing the button that reads 'View All From Seller'. 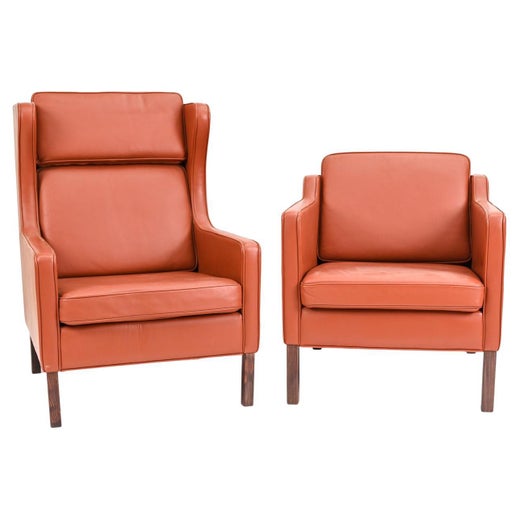 Among the great mid-20th century Danish furniture designers, Børge Mogensen distinguished himself with his faith to traditional values of craftsmanship and honesty of materials.

While peers such as Hans Wegner, Finn Juhl and Arne Jacobsen designed some of the most striking and now iconic furnishings of the era, Mogensen focused on making pieces that were simple, durable and comfortable — and in the long run perhaps more useful and better loved.

Mogensen studied under and later worked for Kaare Klint, a master cabinetmaker whose chief tenets were quality of construction and simplicity of line. Klint was a classicist, who believed that furniture forms should evolve from those of historical models. So, too, in his way was Mogensen, as two of his best-known earlier pieces attest. His 1945 Spokeback Sofa, with hinged arms that can be lowered to facilitate lounging, is a reinterpretation of the venerable Knole settee. With the oval silhouette of its plywood backrest and waterdrop-shaped cutouts, Mogenson’s Shell chair, designed in 1949, can be seen as a novel take on early 19th century Empire side chairs.

Yet Mogensen shared the aesthetical sensibilities of his most forward-looking colleagues. His cabinets deploy the same spare geometries and lushly figured woods as those of Ludwig Mies van der Rohe and his disciple Florence Knoll, the chief difference being that Mies and Knoll used chrome steel for the frames and legs of their pieces. The brawny oak frames and slung leather seats and backrests of Mogensen’s Hunting chair (1950) and Spanish chair (1958) display the same hefty construction and appreciation of natural materials seen in the work of Charlotte Perriand and Sergio Rodrigues.

As you will see from the furnishings on 1stDibs, Børge Mogensen designed for function more than sculptural effect. While his chairs may not be the first pieces in a décor to draw the eye, they are often the first to draw in those looking for a comfortable seat.

About the Seller
5.0
Located in Lisse, Netherlands
Platinum Seller
These expertly vetted sellers are 1stDibs' most experienced sellers and are rated highest by our customers.
Established in 2000
1stDibs seller since 2016
1,947 sales on 1stDibs
Typical response time: 1 hour
More From This Seller

$1,949
Danish Modern Coffee Table by Borge Mogensen
By Børge Mogensen
Located in Minneapolis, MN
Professional, skilled furniture restoration is an integral part of what we do every day. Our goal is to provide beautiful, functional furniture that honours its illustrious past. Our...
Category

$3,995
Børge Mogensen Coffee Table 'a'
By Fredericia, Børge Mogensen
Located in Frankfurt, Hessen, DE
Coffee table designed by Børge Mogensen in 1956. The table is made in solid oak and has an interesting base construction. Surfaces and legs are in very good condition. Manufactured b...
Category