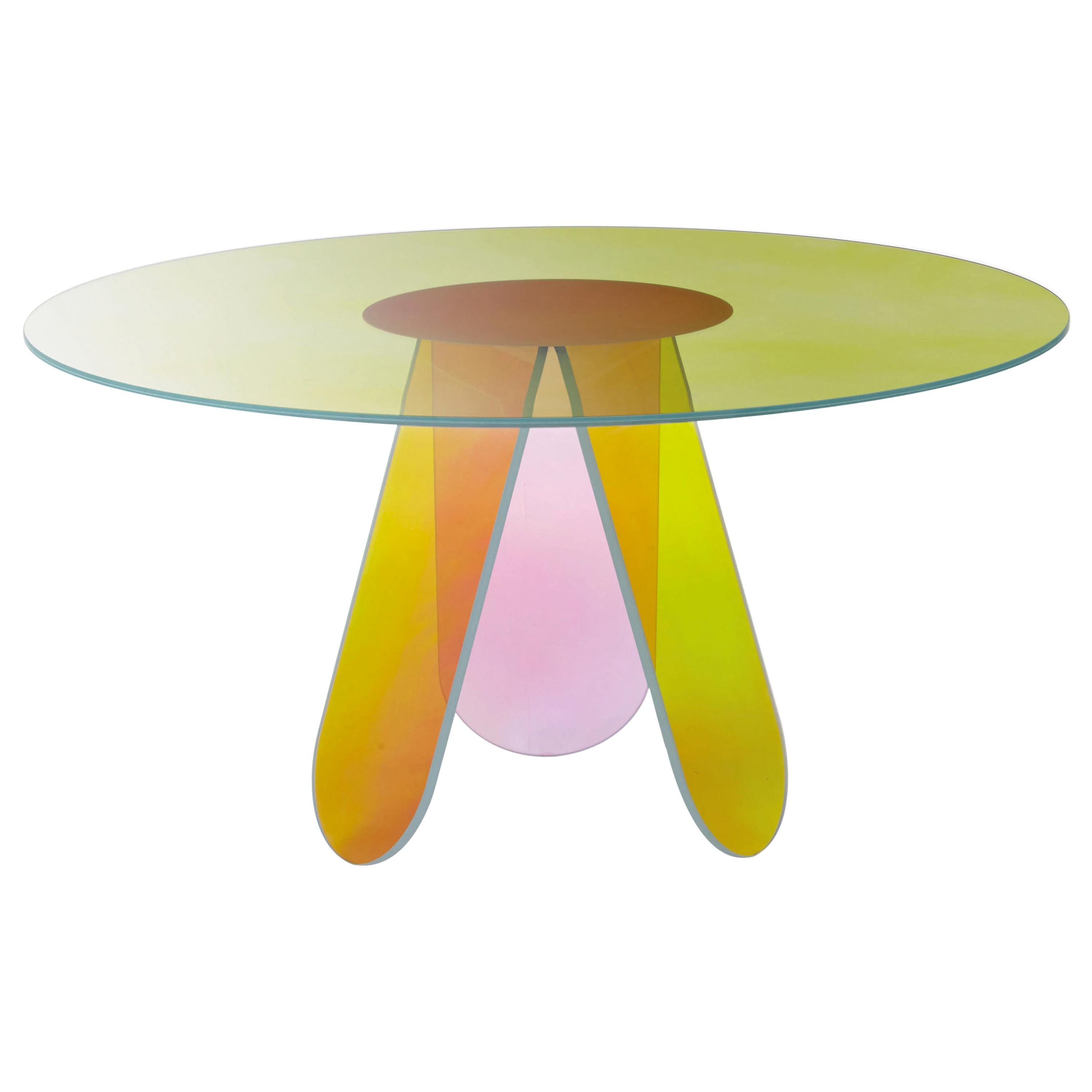 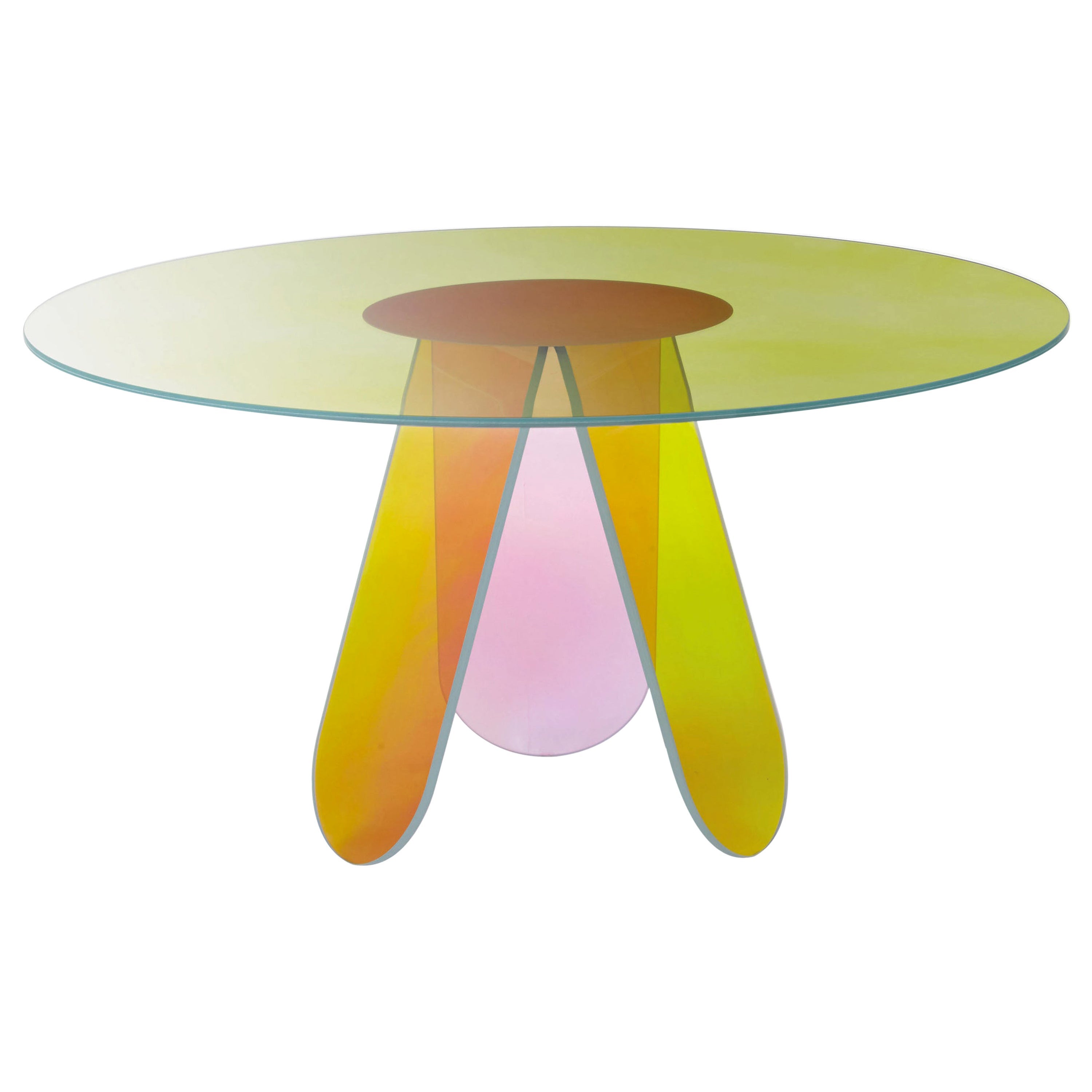 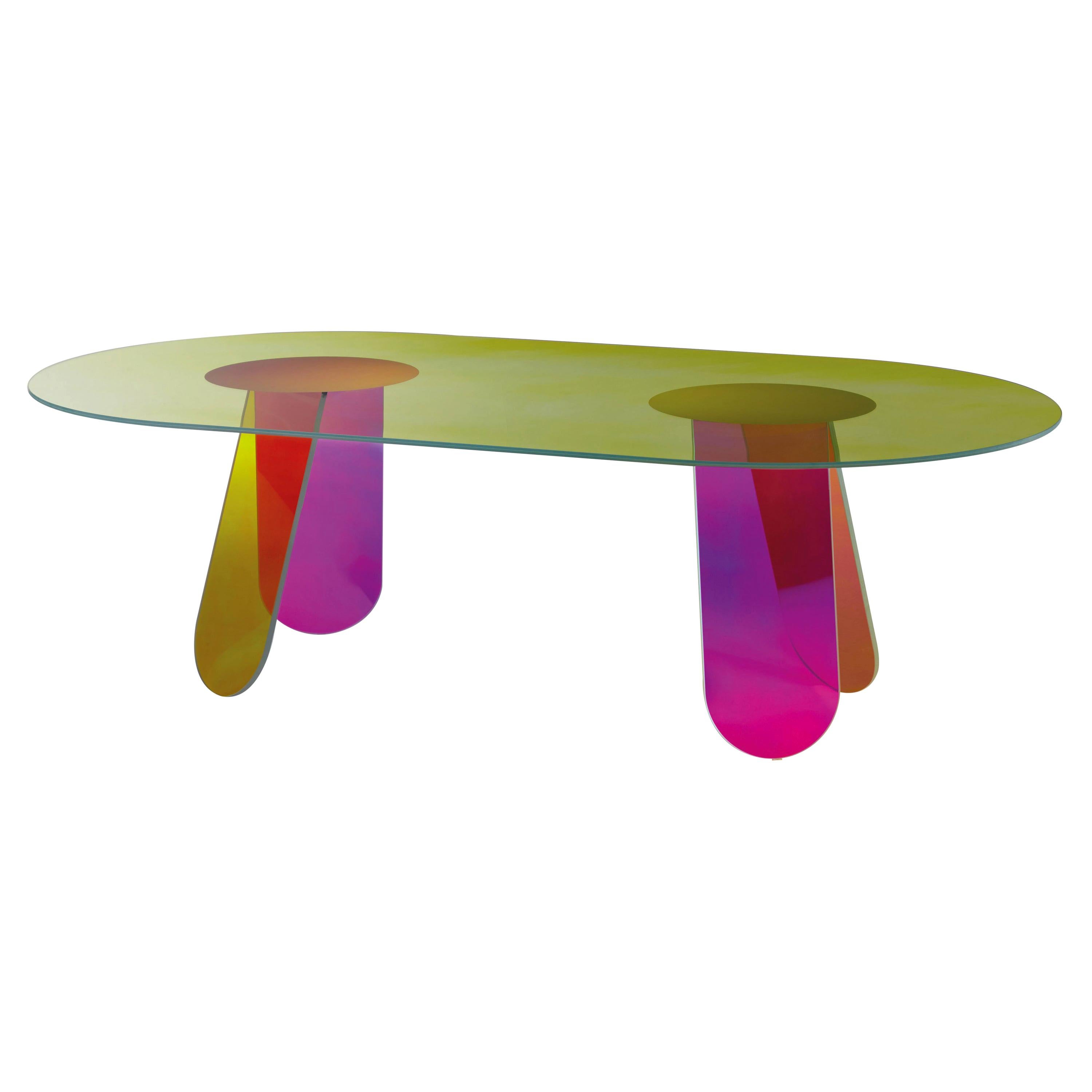 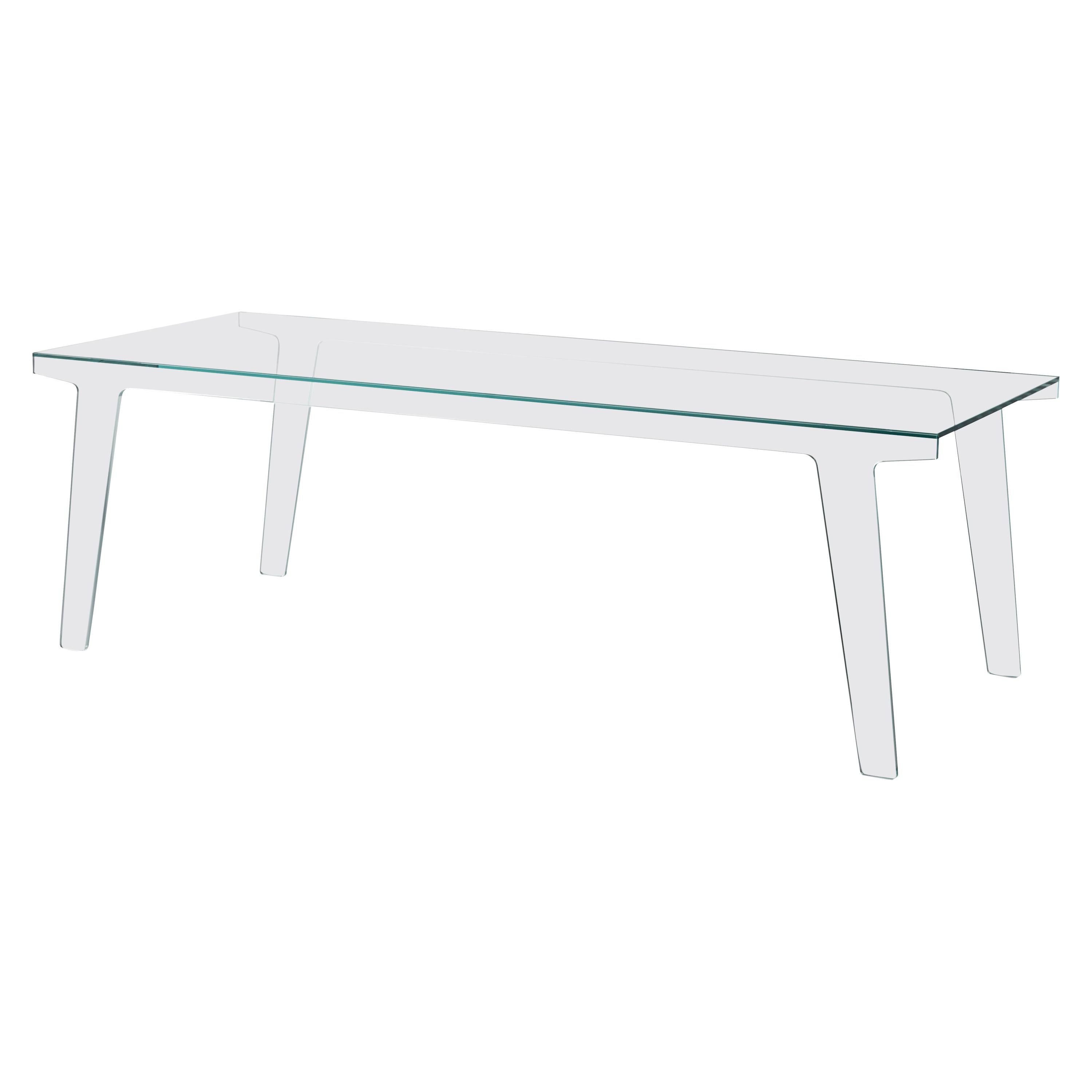 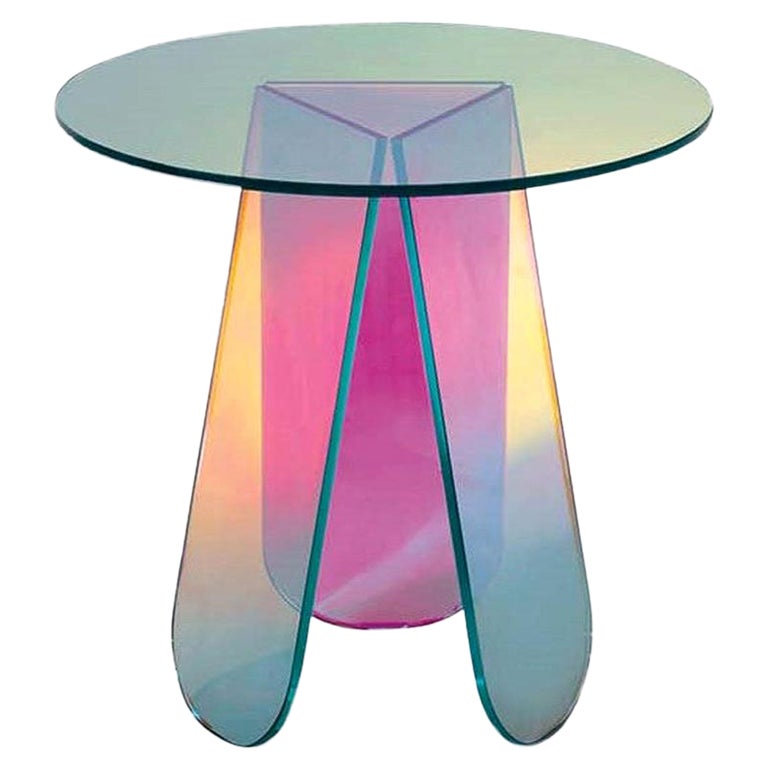 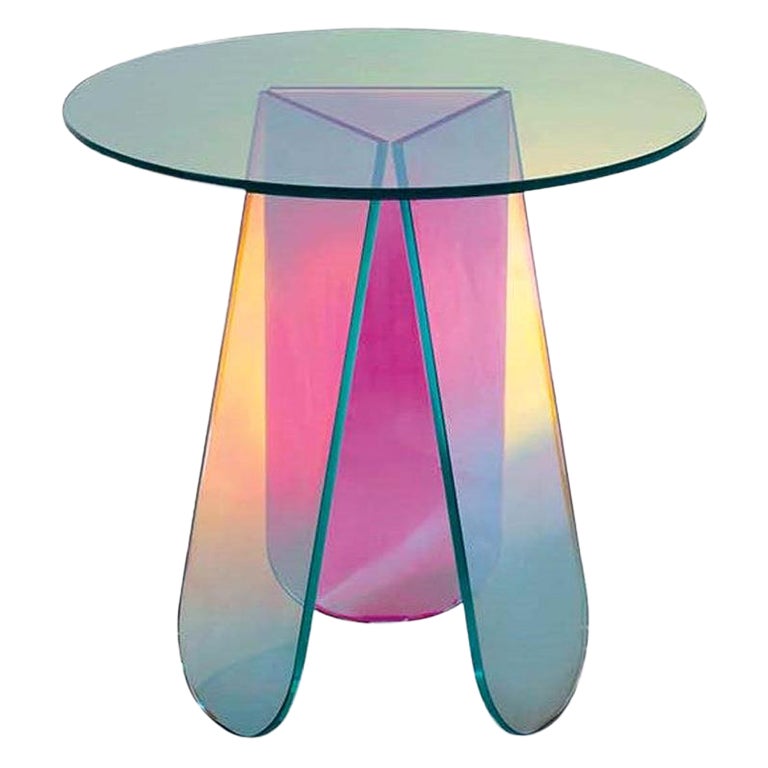 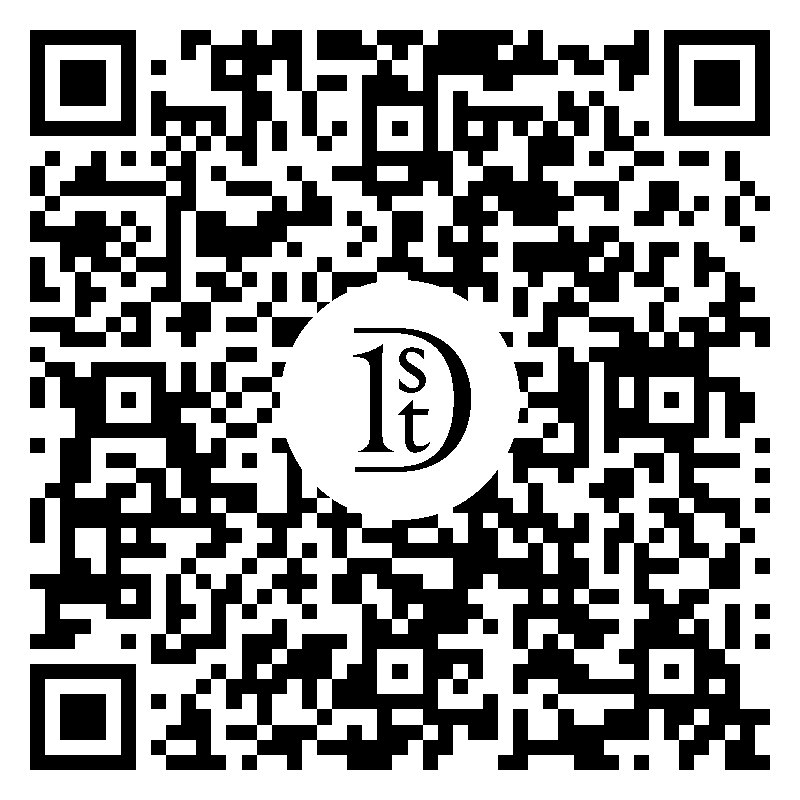 Shimmer rounded table is shown here with laminated and glued glass, and in the medium size of the four rounded tables. The collection consists of high tables, low tables and consoles in laminated and glued glass, characterized by a special iridescent multichromatic finish; the nuance varies according to the angle of the light source and the vantage point. Reflected objects with a magical and ethereal appearance emerge. The high tables bases can be dismantled and are fixed to the top by means of metal plates, concealed by a circular decorated covering. Patricia Urquiola was born in Oviedo (Spain) in 1961. Lives and works in Milan. She attended the School of Architecture of Madrid Polytechnic and Milan Polytechnic, where she graduated in 1989 with Achille Castiglioni. From 1990-1992 she was assistant lecturer to both Achille Castiglioni and Eugenio Bettinelli in Milan and Paris. From 1990-1996 she was responsible for the new product development office of DePadova, working with Vico Magistretti. In 1996 she became head of Lissoni Associati’s Design Group. In 2001 she opens her own studio working on product design, architecture, installations. Amongst her last projects of architecture: Mandarin Oriental Hotel in Barcelona and W Retreat&Spa a Vieques (Porto Rico); a villa in Udine; scenography of the opera “L’incoronazione di Poppea” by Monteverdi; showroom and installations for Hermès, Gianvito Rossi, Flos, Moroso, H&M and the general concept of Pitti Immagine Firenze. She designs for the most important Italian and international firms as Agape, Alessi, Andreu World, Artelano, Axor, B&B Italia, Bart Design, Bisazza, BMW, Bosa, Budri, Chevalier Edition, Il Coccio, De Padova, De Vecchi, Driade, Emu, Fasem, Salvatore Ferragamo, Flos, Foscarini, Gallotti & Radice, Gandia Blasco, Glas Italia, Kartell, Kettal, Kvadrat, Mixing Media, Maurice Lacroix, Liv’it, Peter Mabeo, MDF Italia, Molteni, Moroso, Mutina, Olivari, Panasonic, Paola Lenti, Rosenthal, Champagne Ruinart, San Lorenzo, Tronconi, Viccarbe. Consulting for Honda and LG. Some of her products are exposed in the permanent collection of MoMA in New York and other international museums. She has won several international prices and awards. Amongst others the Medalla de Oro al Mérito en las Bellas Artes 2010 awarded by the Spanish Government (2011) and the A&W Magazine nomination as Designer of the Year 2012. Additional information: - Dimensions: SHI11; Ø 130 - H 74 - Finishes: Laminated and glued glass - Additional Size Options: SHI08: Ø 95 - H 74, HI09: Ø 105 - H 74, SHI10: Ø120 - H74, SHI12: Ø 140 - H 74. - Attention: the presence of small scratches, irregularities and non homogeneous coloring, are an intrinsic feature of the special material use. Please note that the list price excludes VAT. An additional VAT charge may apply. 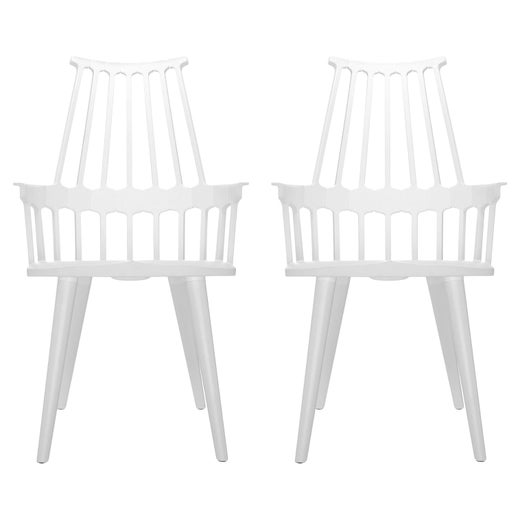 Spanish-born, Milan-based architect Patricia Urquiola doesn’t lack for commissions these days, and, unlike the work of many other high-concept architects, her projects tend to get constructed, envelope-pushing though they sometimes are. And when she’s not imagining covetable creations for contemporary furniture houses — including B&B Italia, Driade and Cassina, where she was named art director in 2015 — Urquiola makes headlines by designing some of the world’s most aesthetically ambitious hotels, such as 2016’s Il Sereno on Lake Como in Lombardy, Italy.

Born in Oviedo, in northern Spain, Urquiola grew up in a family that valued creativity. Everyone in the house, she says, talked and cared about design. She fondly remembers her mother going to London in the 1960s and ’70s and coming back home with a Mary Quant this, a David Hicks that. When it came time to go to university, Urquiola decided that her place was architecture school, first at the Polytechnic University of Madrid and then at the Polytechnic University of Milan, where she completed her design thesis — a felt carpet with a panel that connected to a home’s electricity source and telephone line so that you could plug, say, a table lamp and your phone into it — under the direction of legendary Italian industrial designer Achille Castiglioni.

Today, Urquiola has become a go-to when it comes to avant-garde product, hospitality and retail design, working with such blue-chip international furniture, fashion and hotel companies as Alessi, Baccarat, Salvatore Ferragamo, Kvadrat, Mandarin Oriental, Panerai, Rosenthal, W Hotels and Louis Vuitton, among many others. Her residential projects, meanwhile, though few and far between, stretch from such far-flung locations as Punta del Este, Uruguay, and Melbourne, Australia, to closer-to-home Udine, in northeastern Italy, where she designed the two-story, largely open-plan glass-and-cedar home of Patrizia Moroso, creative director of the family-owned design company that bears her last name.

Over the course of a long-term and highly productive collaboration spanning some 20 years, Urquiola has created dozens and dozens of Moroso-branded products. A chair from her 2001 Fjord line of seating, tables and poufs for the company sits in the collection of New York’s Museum of Modern Art, and Moroso debuted (love me) Tender, her modular sofa system upholstered in jersey, during Milan’s Salone Internazionale del Mobile in April of 2014.

About the Seller
5.0
Located in Macherio, Italy
Vetted Seller
These experienced sellers undergo a comprehensive evaluation by our team of in-house experts.
1stDibs seller since 2019
150 sales on 1stDibs
Typical response time: 1 hour
More From This SellerView All
You May Also Like
Featured in The New IconsView All