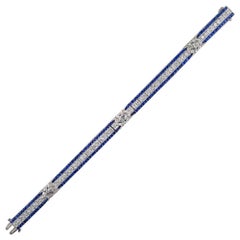 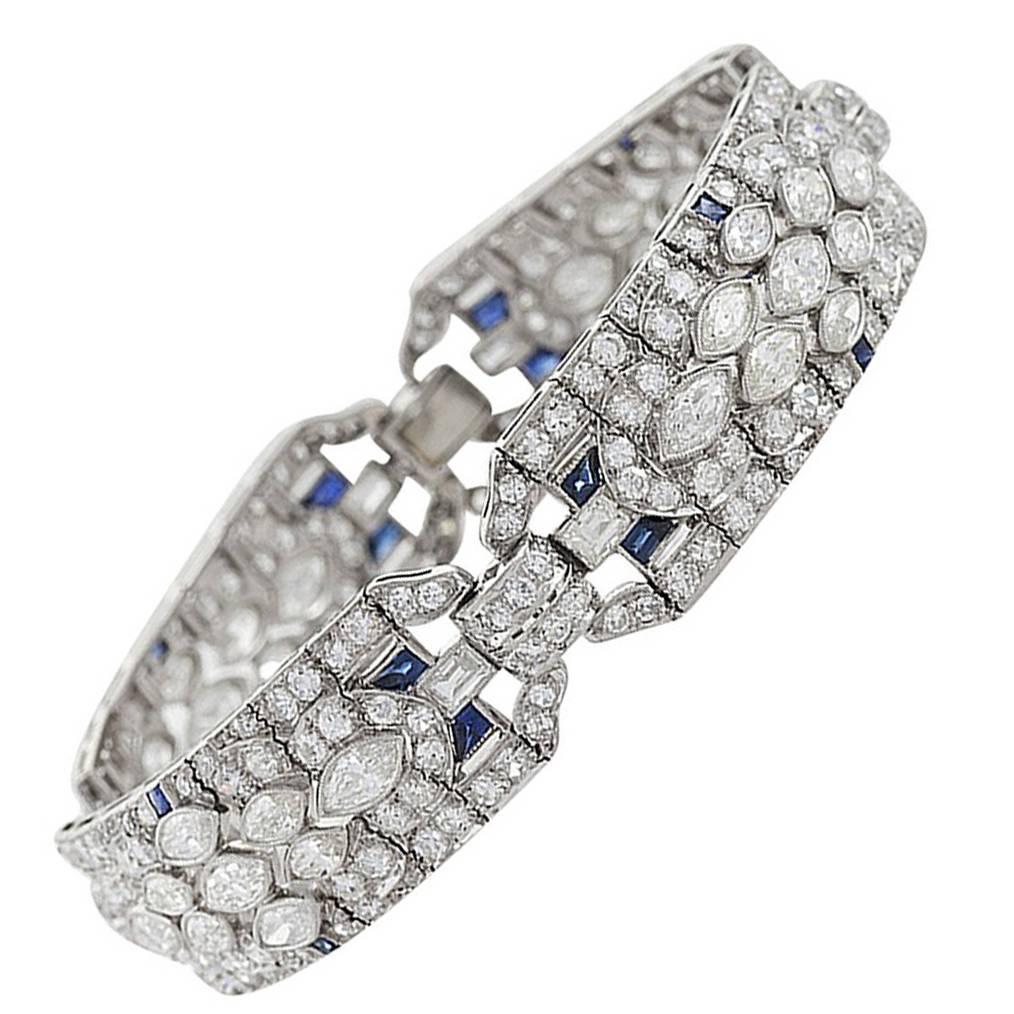 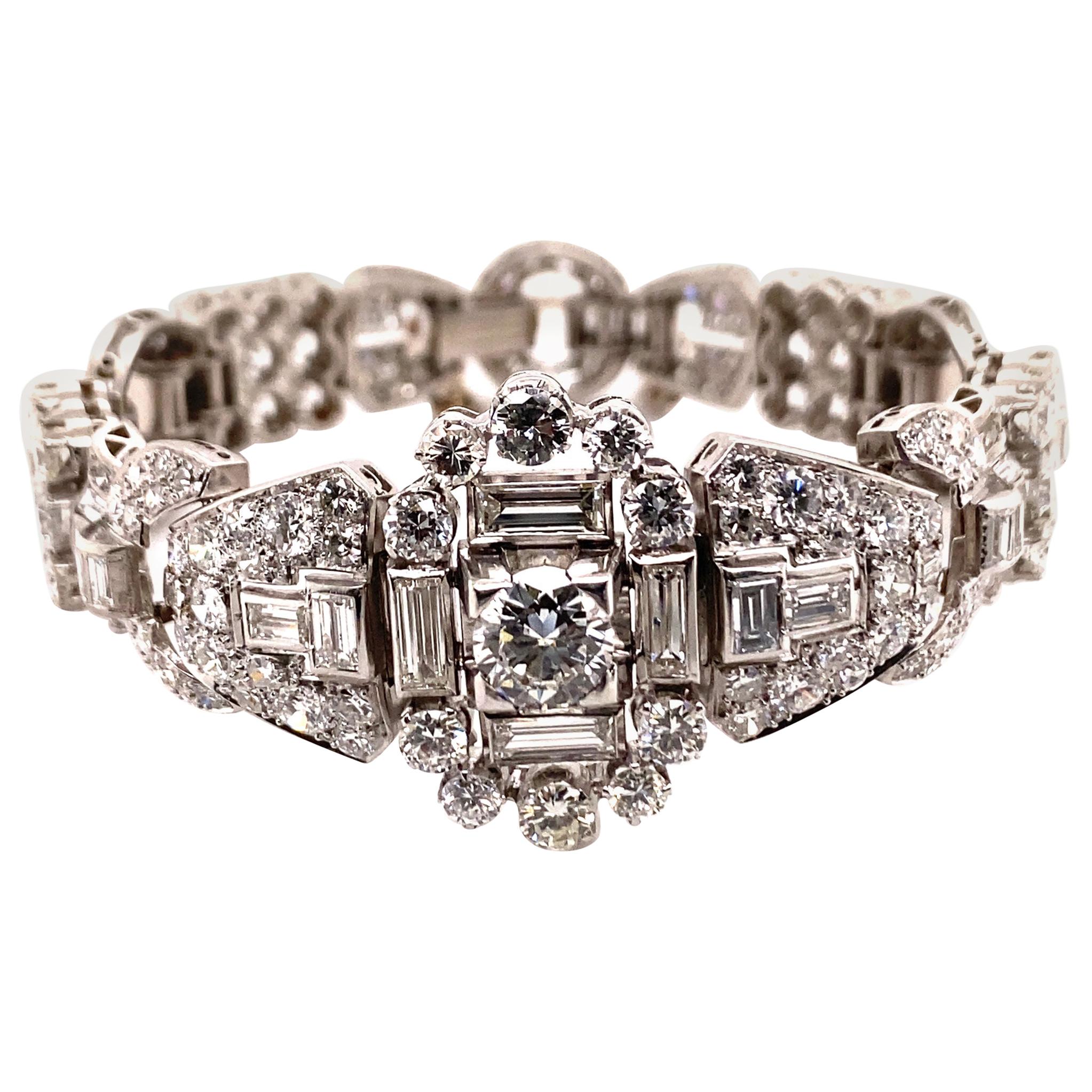 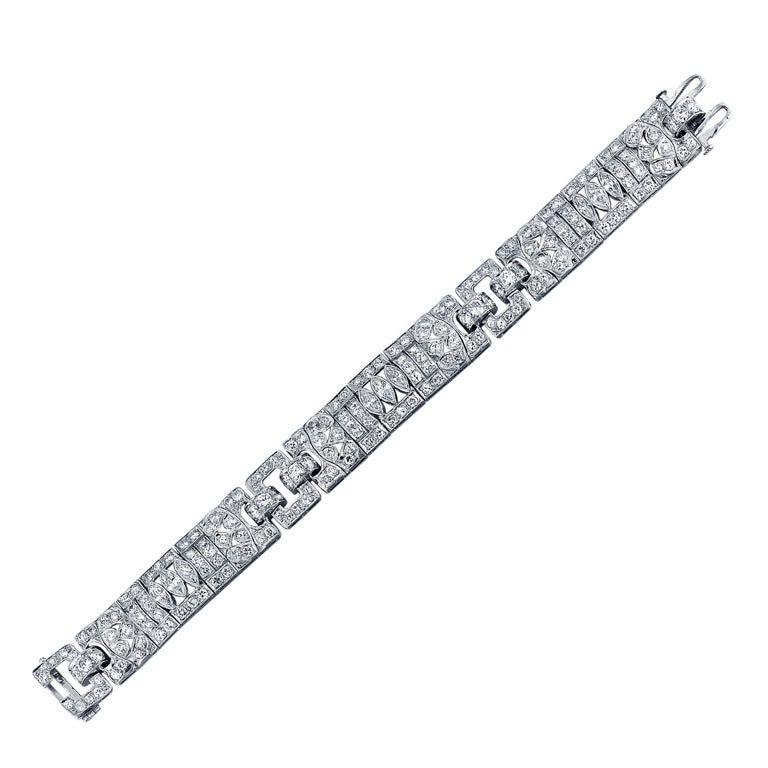 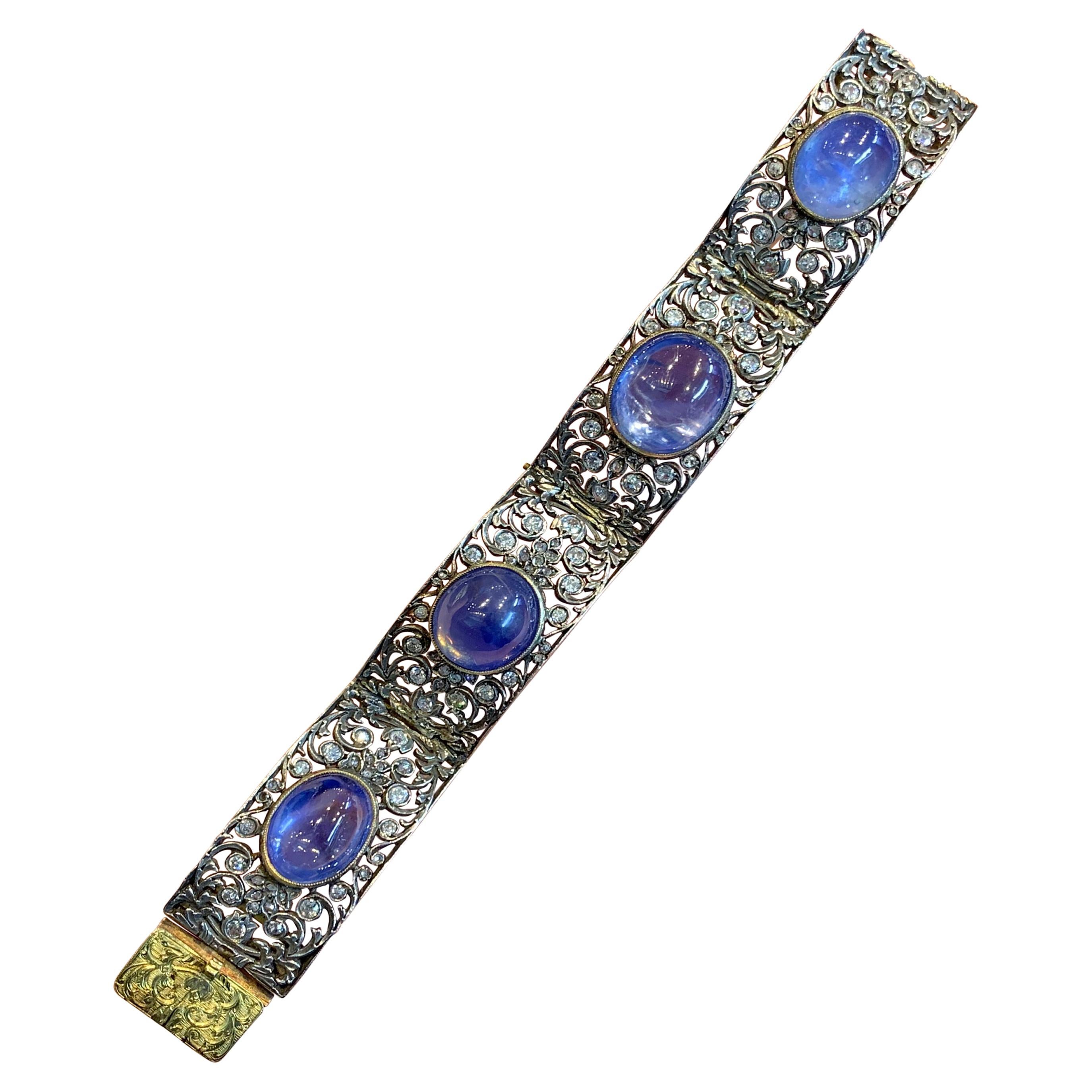 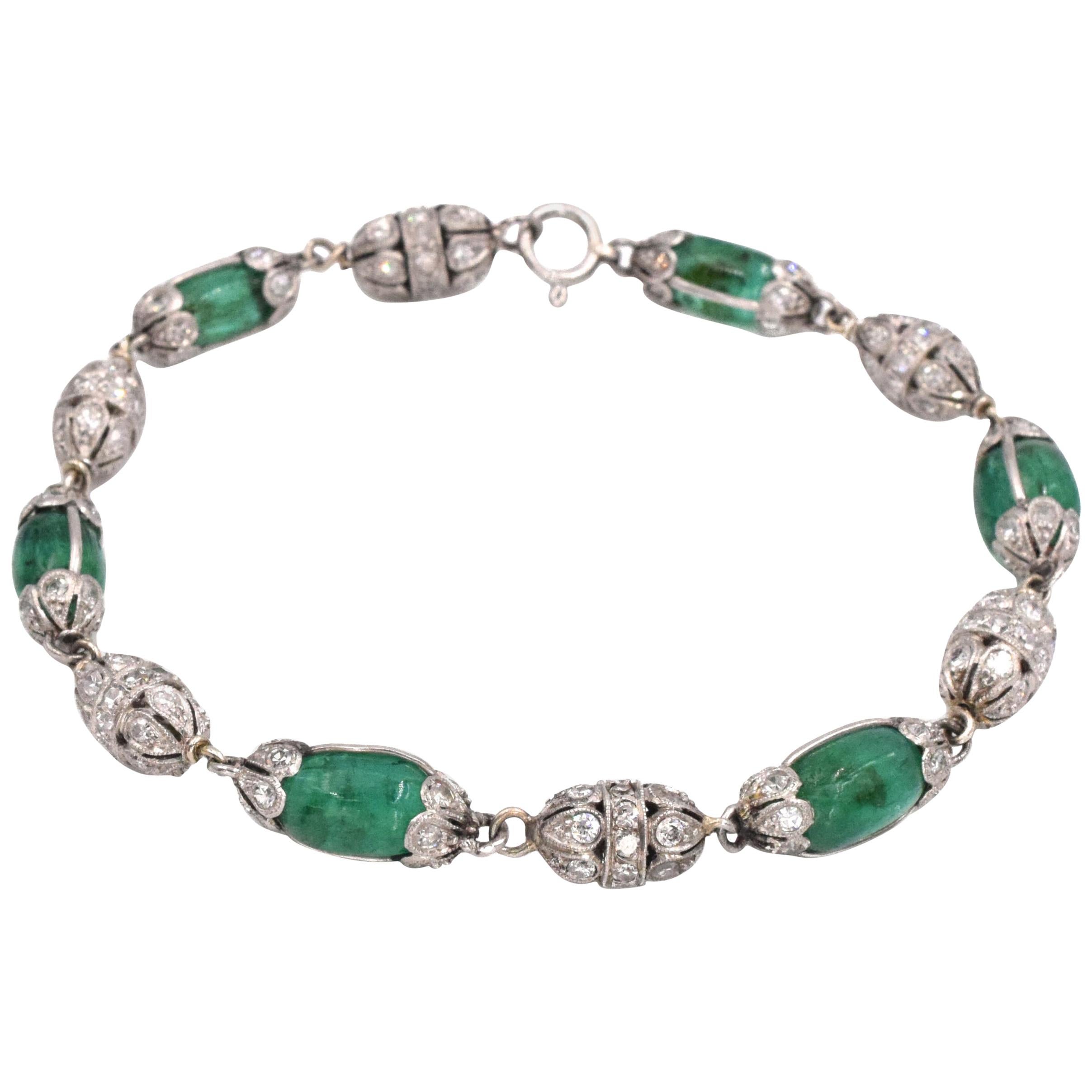 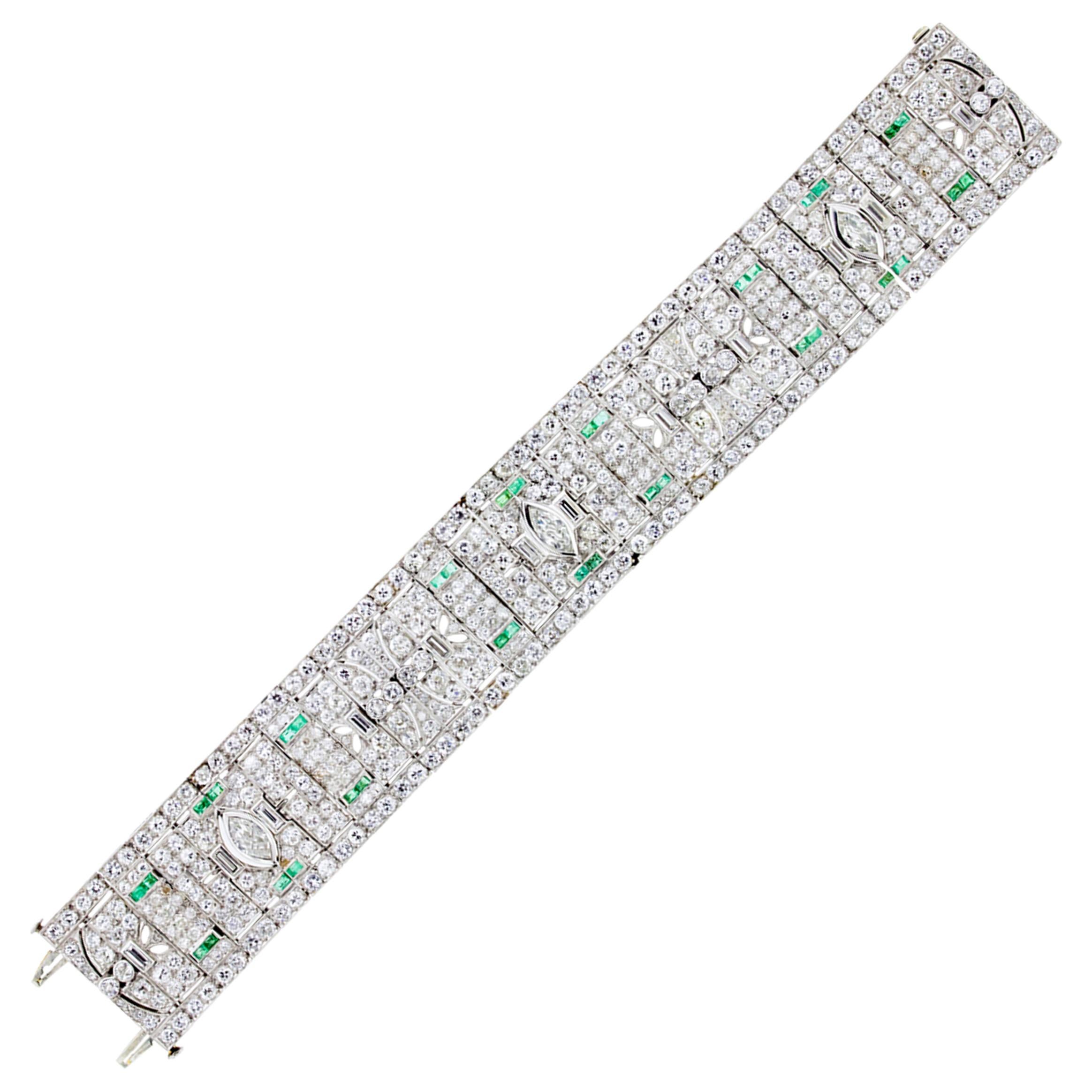 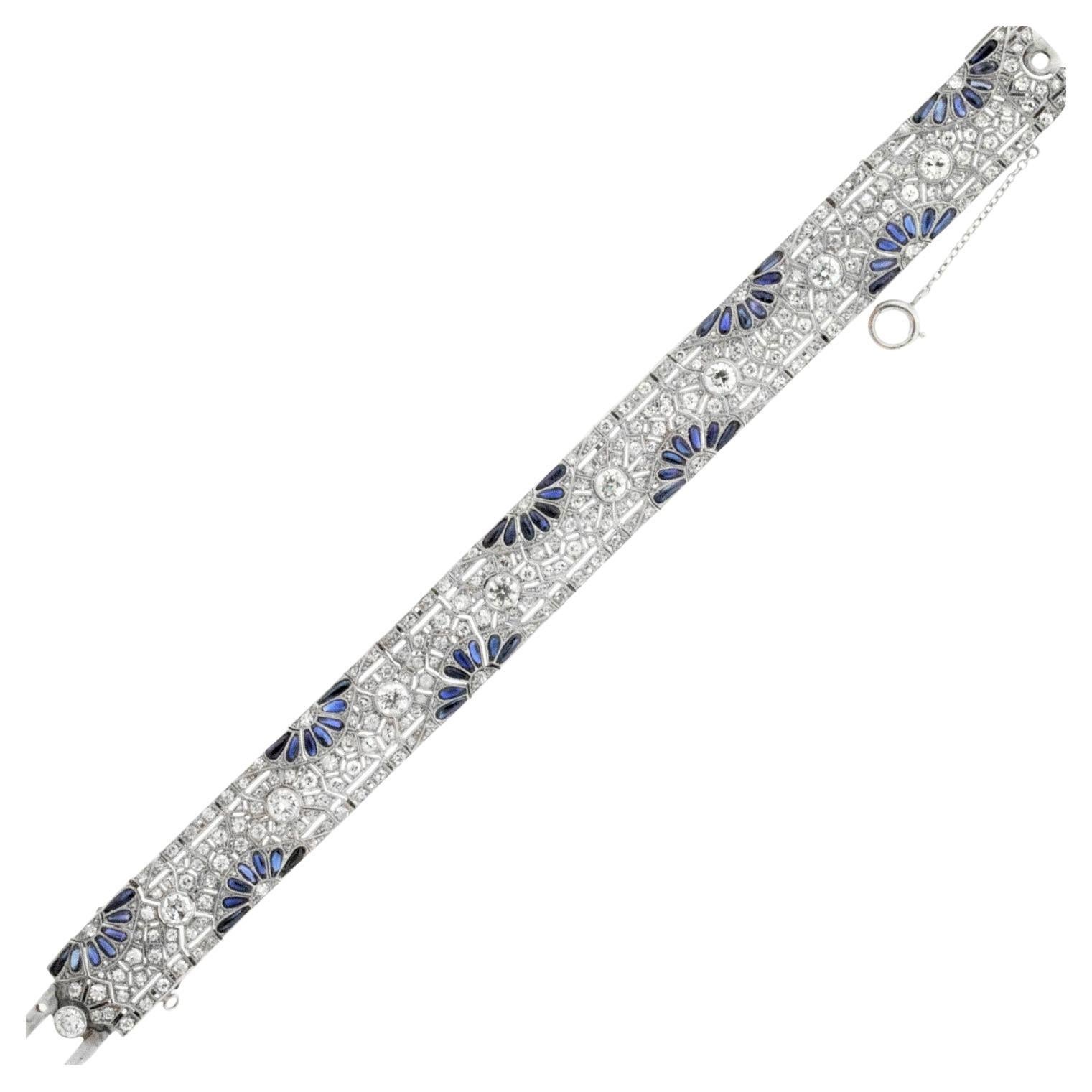 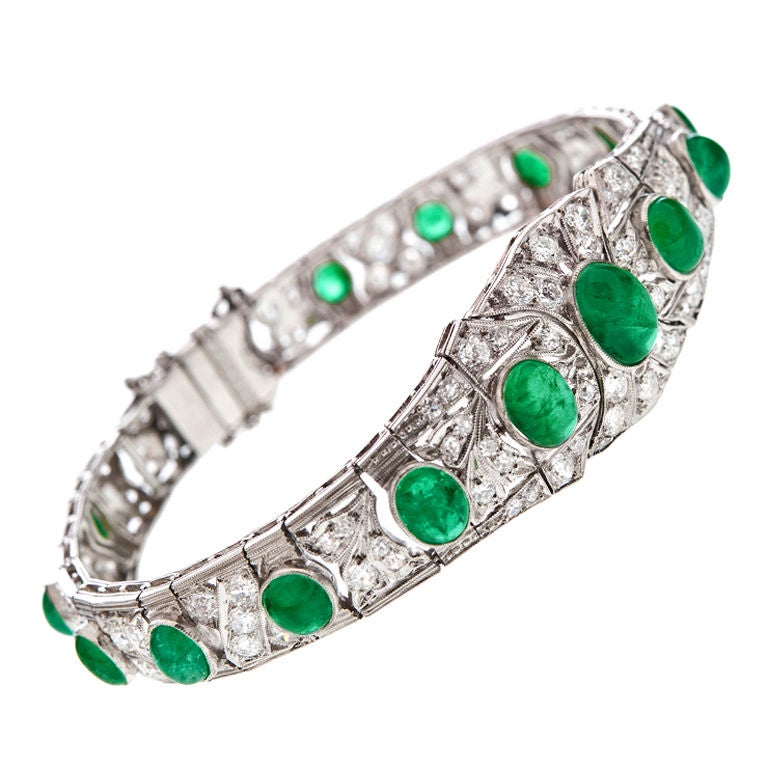 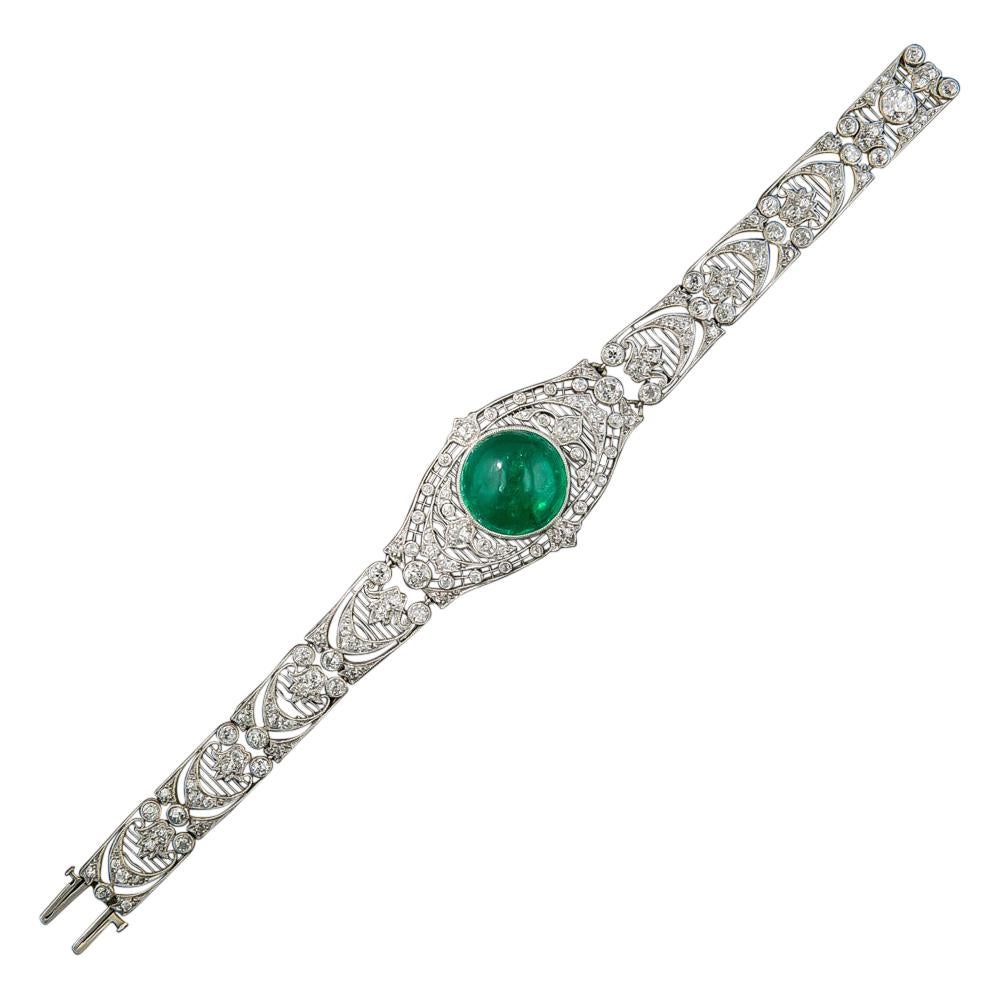 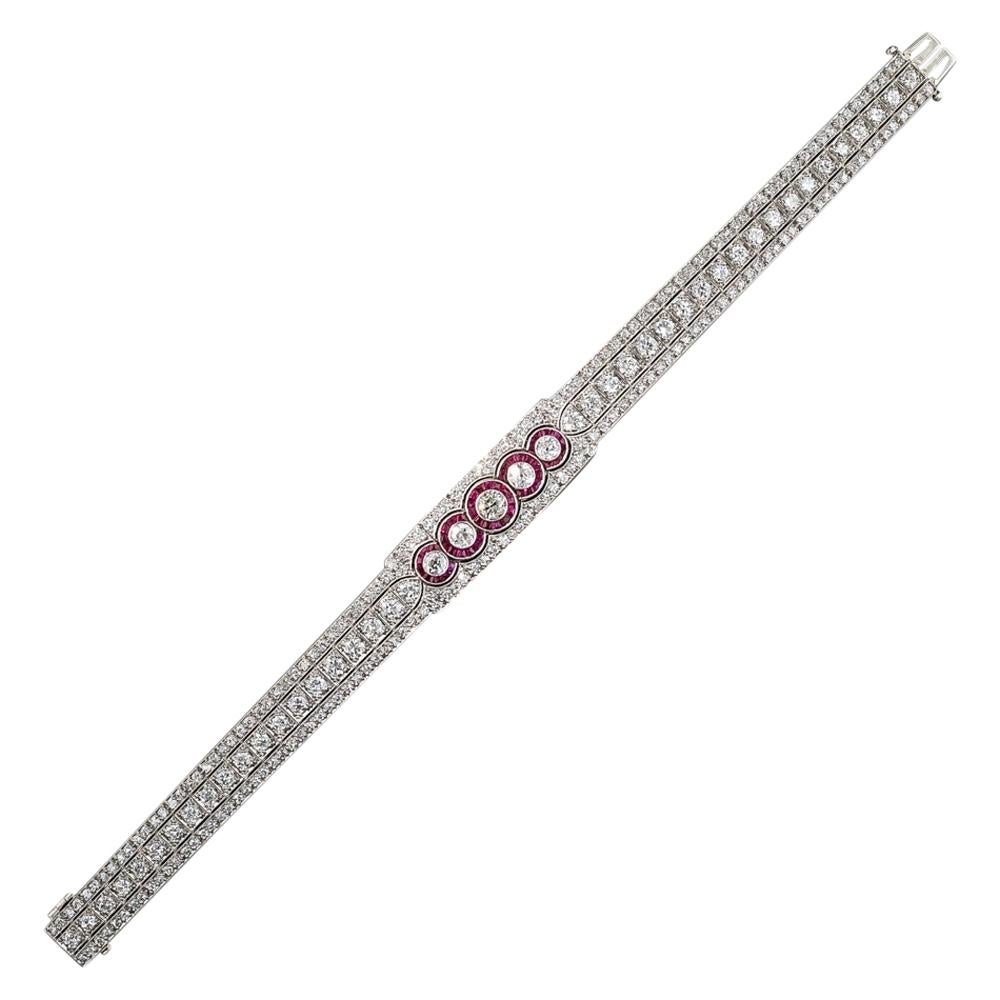 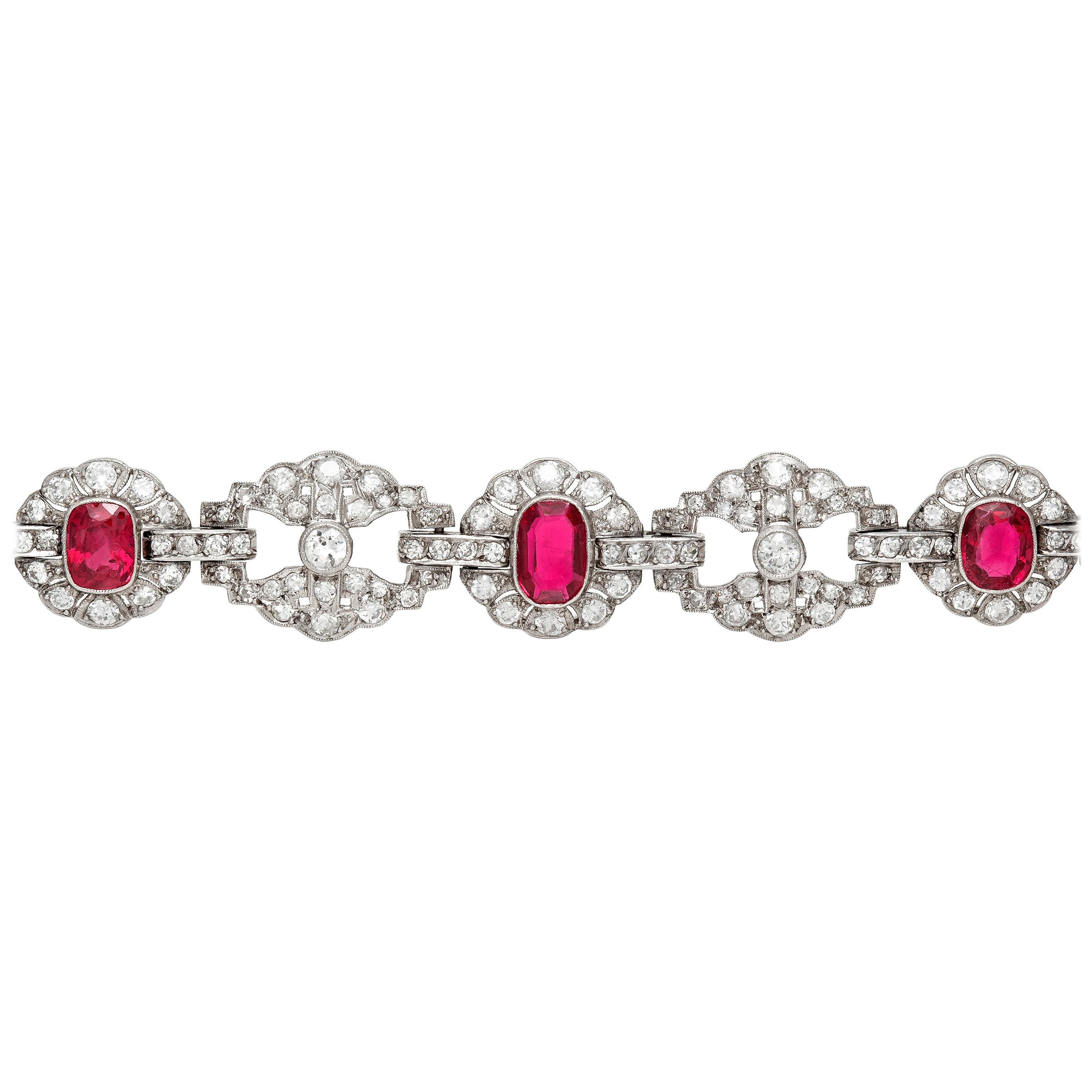 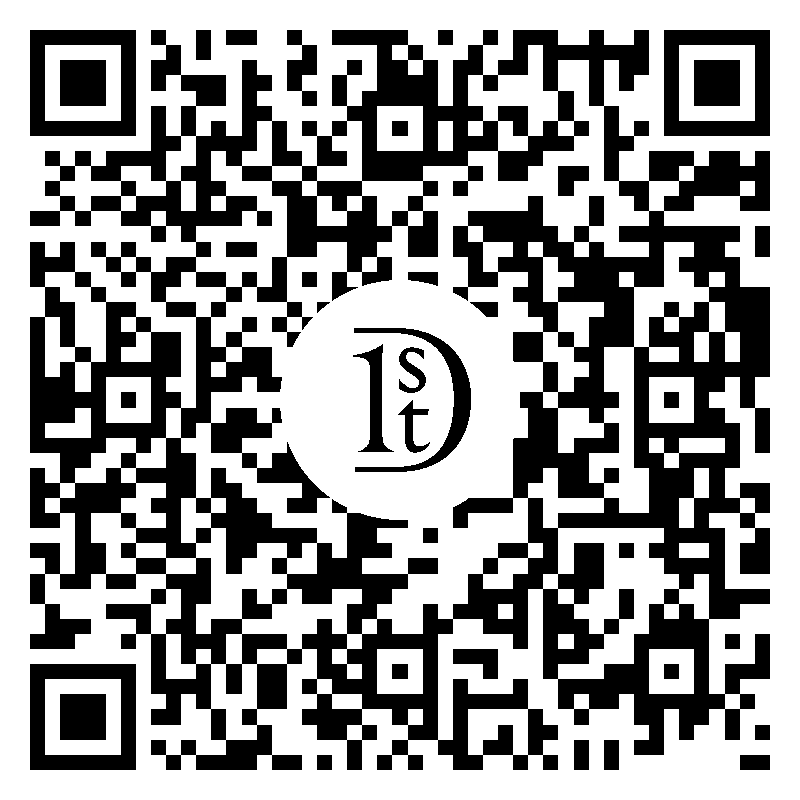 Few original Art Deco delights come as fine and fabulous as this streamlined sparkler by the renowned American manufacturer of superior jewels - Oscar Heyman Bros. The central straight row diamond center section is punctuated three times by marquise diamonds and is bordered on each side by the finest vibrant blue calibre sapphires imaginable. A Jazz Age masterpiece - circa 1920. 5/16 by 7 1/4 inches. Accompanied by a Certificate of Authenticity by Oscar Heyman. 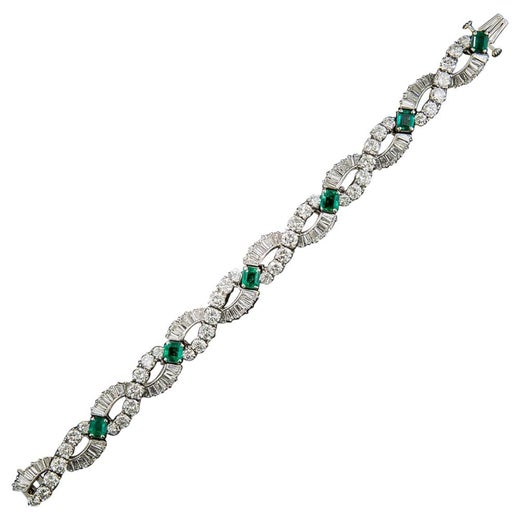 Known as “the jewelers’ jeweler,” Oscar Heyman (1888–1970) designed pieces for Cartier, Tiffany & Co., Van Cleef & Arpels, Harry Winston and Black, Starr & Frost. The family-run Oscar Heyman & Brothers jewelry company was founded by Heyman with his brothers Nathan and Harry in 1912. Jewelers from Latvia, they had trained at their great-uncle’s workshop, which had clients including Russian imperial jeweler Fabergé, before immigrating to the United States in the early 1900s.

After arriving in New York, Oscar worked with Pierre Cartier and Nathan was a tool maker at Western Electric before they came together to open their jewelry business. Highly skilled craftsmen, the Heyman brothers quickly developed a roster of high-profile clients — primarily big-name jewelers — drawn to their work with dazzling stones and meticulous design. In 1917, Black, Starr & Frost commissioned the brothers to design an American flag brooch, which would become a recurring motif in the Oscar Heyman & Brothers portfolio. They also designed the Pansy brooch in the 1930s, another long-popular accessory that was produced exclusively for Tiffany & Co. toward the end of the 20th century. After Heyman designed for four of the five jewelers on view at the 1939 World’s Fair House of Jewels (Cartier, Udall & Ballou, Marcus & Co. and Black, Starr & Frost), the company was given the moniker “the jewelers’ jeweler.”

Heyman & Brothers later designed gem-encrusted medallions that traveled to the moon on Apollo 16, the necklace setting for the 69-carat diamond Richard Burton gave Elizabeth Taylor in 1969 and even a pair of ruby-encrusted Stuart Weitzman stilettos in 2003. Over the years, the company has entranced such clients as Evelyn Lauder, Marjorie Merriweather Post, Billy Porter and Tina Fey with its pieces.

In 2012, the century-old jeweler underwent a rebranding to simplify its name to Oscar Heyman and today is still run by the Heyman family, which manages the whole process from alloying their own metal to cutting and polishing their gemstones to assembling the final product in-house. In 2017, the Museum of Fine Arts, Boston published a monograph authored by Yvonne J. Markowitz and Elizabeth Hamilton that details for a broader audience the history of Oscar Heyman, an unsung company that’s long been behind some of the biggest names in jewelry.

About the Seller
No Reviews Yet
Located in San Francisco, CA
Vetted Seller
These experienced sellers undergo a comprehensive evaluation by our team of in-house experts.
Established in 1969
1stDibs seller since 2020

$52,500
Oscar Heyman Sapphire Diamond Flower Brooch, circa 1940s
By Oscar Heyman
Located in San Francisco, CA
Measuring a striking 3 and 1/8 inches, this chic and stunning mid-20th-century jewel by Oscar Heyman glistens and glows with a pair of bright and beautiful flowers, with petals compo...
Category

$34,500
Art Deco Sapphire Diamond Platinum Bracelet
Located in San Francisco, CA
Sri Lanka (formerly known as Ceylon) is home to some of the world's oldest known sapphire mines and the stones are prized for their rich blue color. In this most marvelous and magnif...
Category

$42,750
French Art Deco Diamond Platinum Black Enamel Bracelet
Located in San Francisco, CA
A magnificent masterpiece. We've seen our share of breathtaking Art Deco bracelets, but this one has a distinctive detail that brings another level of visual intrigue to this superb...
Category