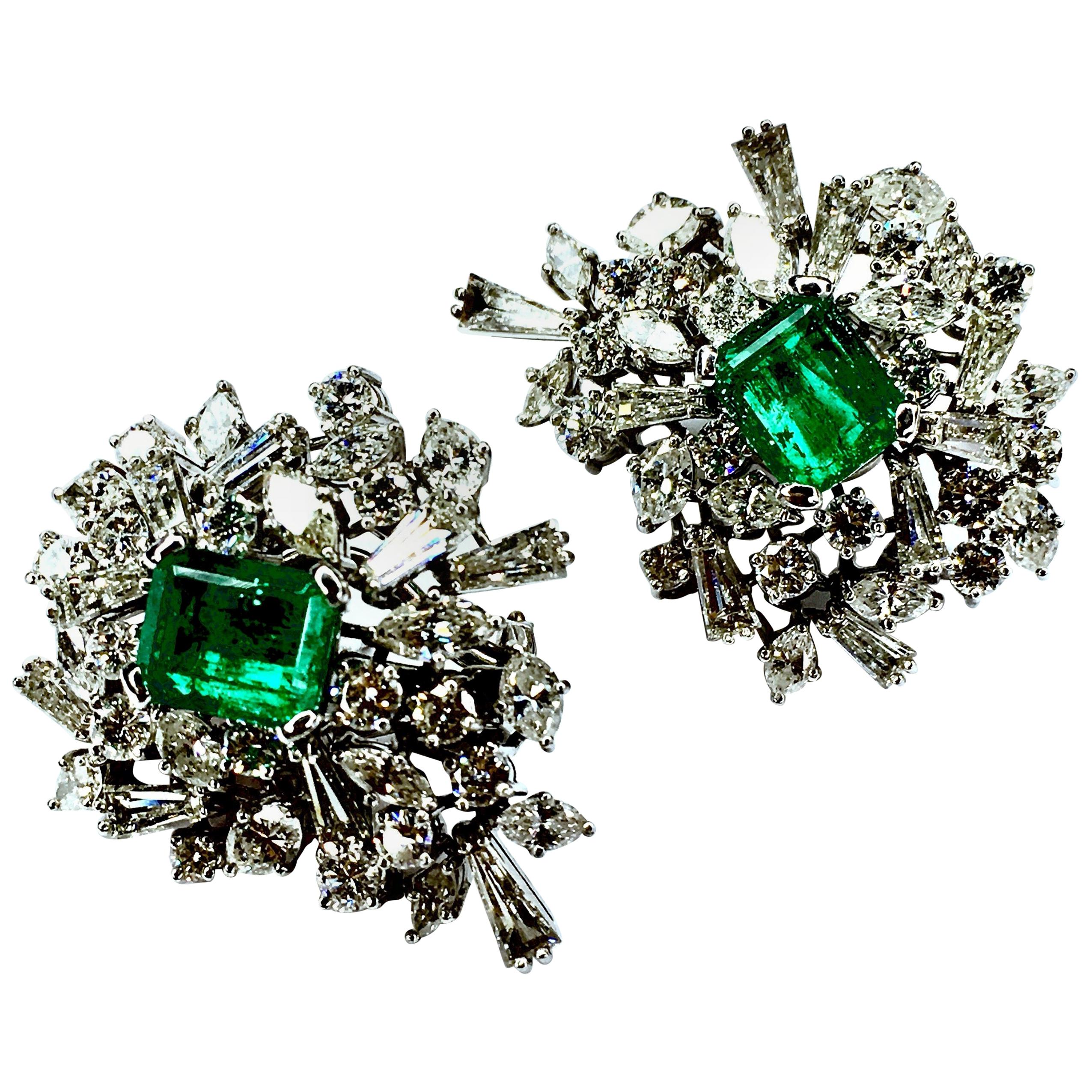 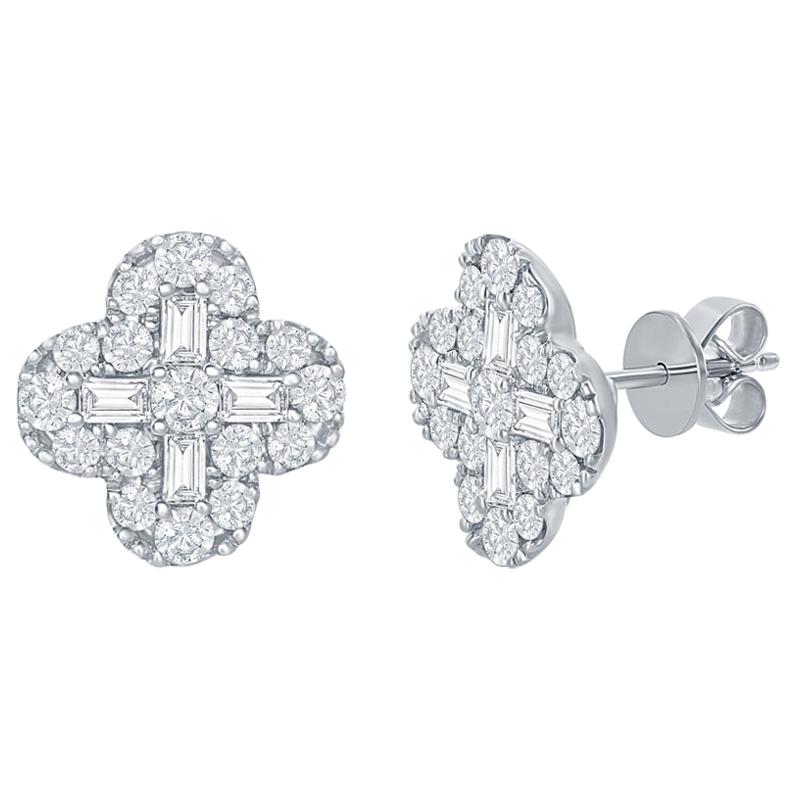 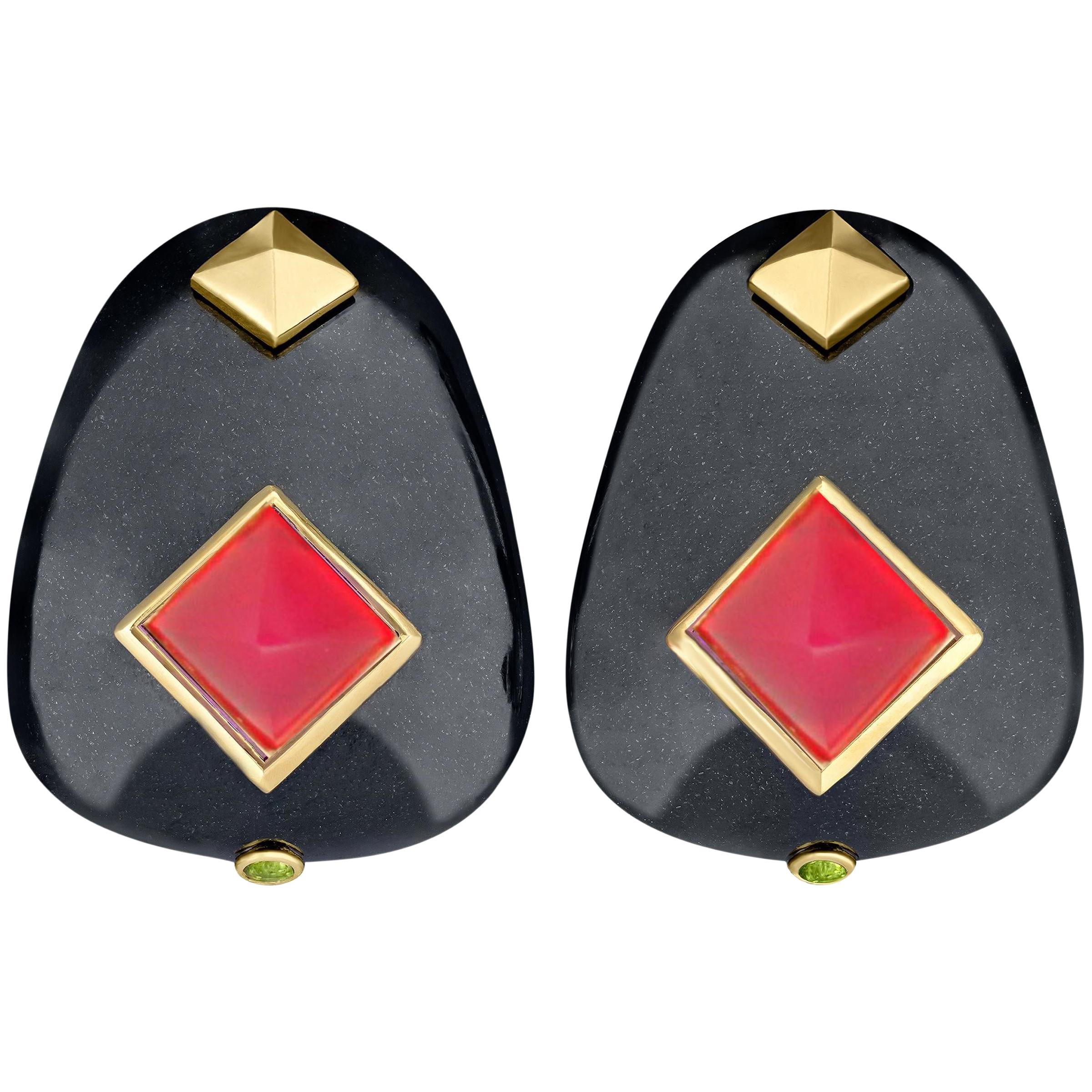 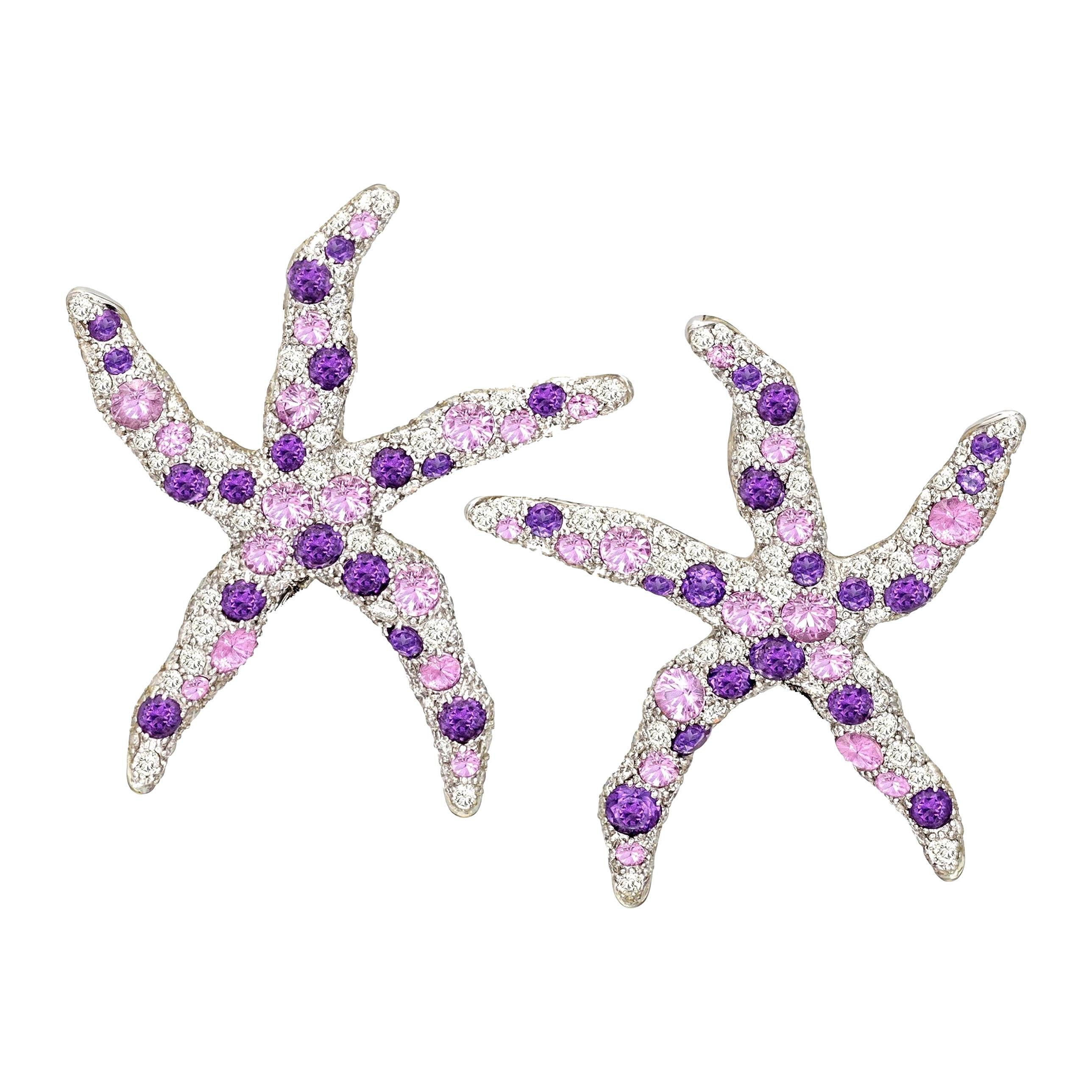 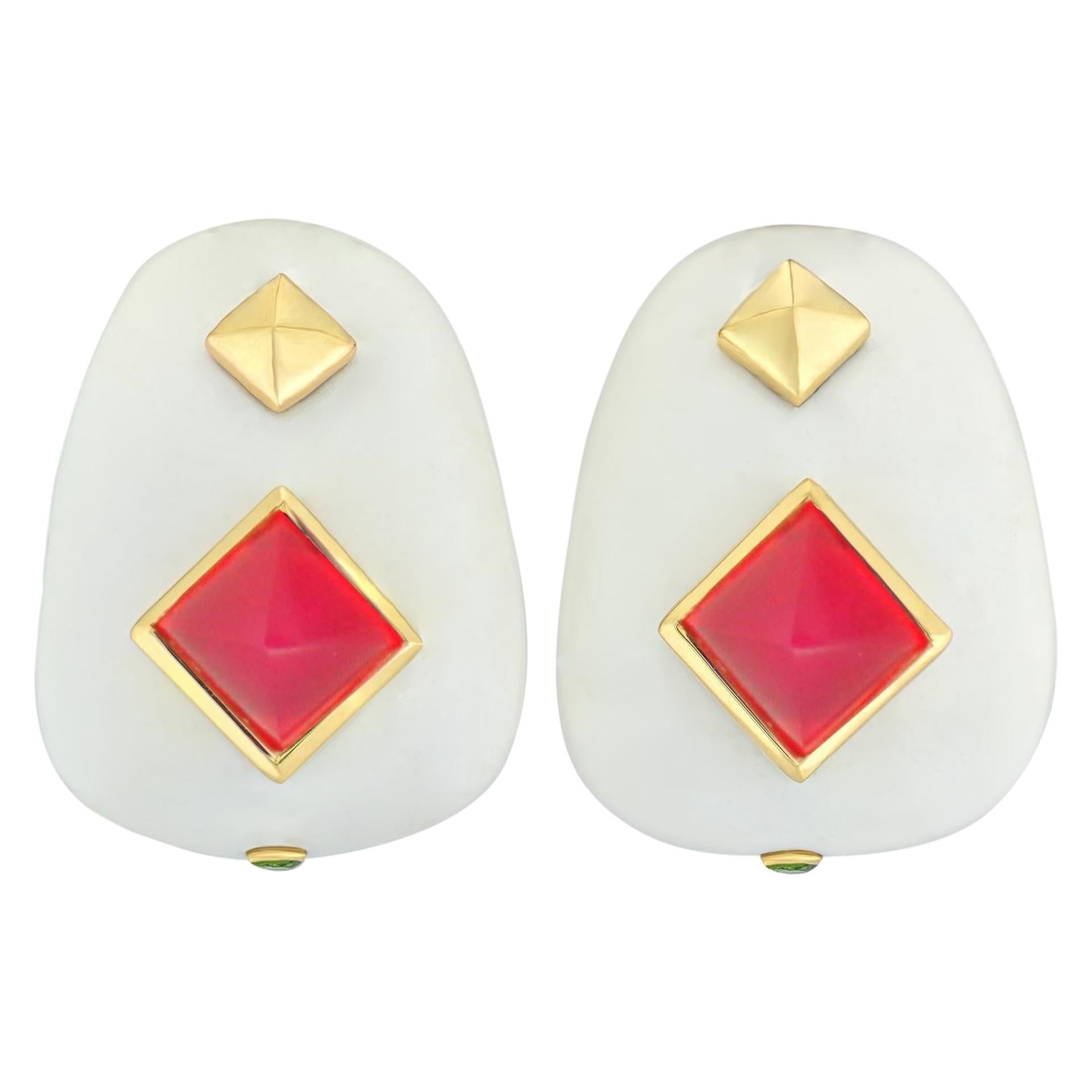 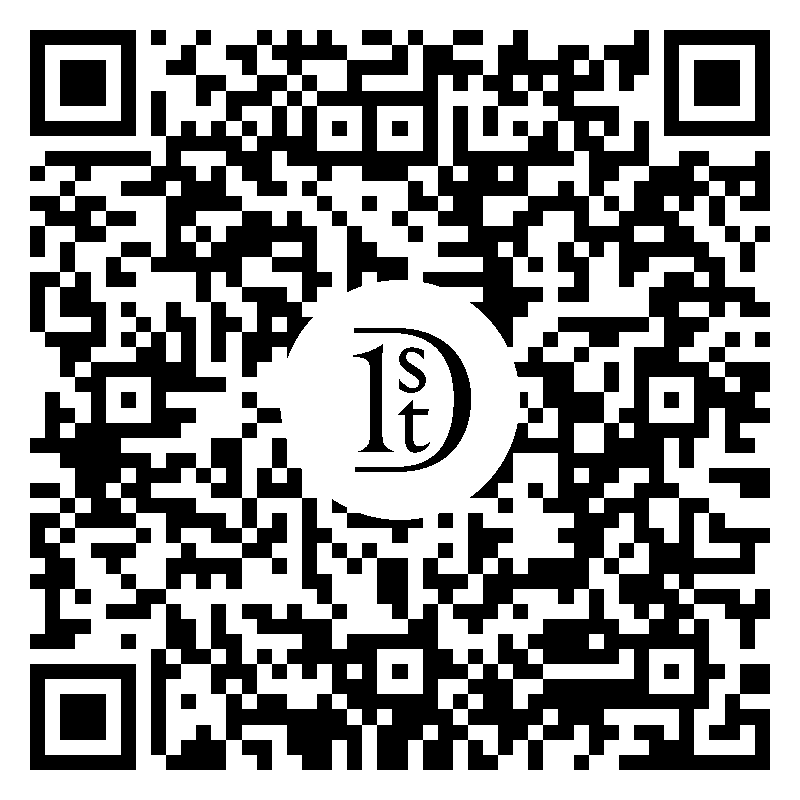 The combination of faceted smoky topaz crystal glass with turquoise boris aurealis glass stones and clear rhinestones set of with a flower top in gilt metal make these signed vintage Elsa Schiaparelli clip on earrings so elegant. They hug the ear lobe with grace and beauty. These are meticulously made and designed. They are from the 40's. They can go day or evening; dress up or down. Ultra chic and very wearable. They can even be angled on an ear. Mid Century yet so modern. These are a fabulous pair of Schiaparelli earrings and a must addition to your collection. 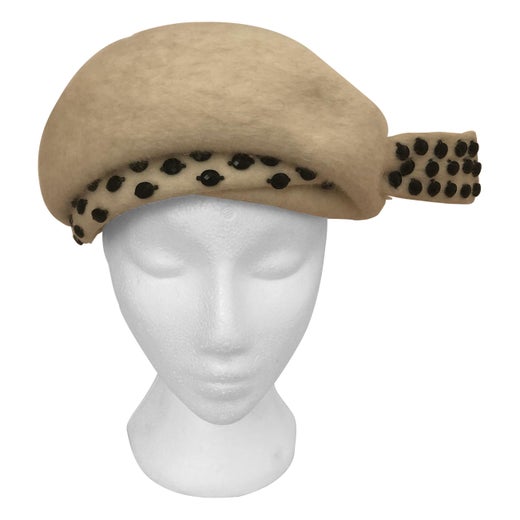 From her signature color Shocking Pink to her collaborations with Surrealist artists, the boldly original Elsa Schiaparelli transformed fashion from the late 1920s to the early ’50s. Experimenting with elements like trompe l’oeil images and colorful visible zippers, the Italian designer instilled a provocative avant-garde artistry in her clothing and accessories, including those created with Salvador Dalí, such as the lobster dress and a hat shaped like a shoe.Born in Rome, Schiaparelli was a rebellious child who grew up among the city’s intellectual elite. She had a voracious appetite for reading and became interested in ancient cultures, astronomy and world religions. Schiaparelli studied philosophy at the University of Rome, and after publishing a collection of poems on love and sensuality that so mortified her conservative parents that they tried, unsuccessfully, to confine her to a Swiss convent, she left for London. A quick marriage to Count Wilhelm de Wendt de Kerlor brought her to New York, but it would be in Paris following her divorce that Schiaparelli embraced her artistic passions. She moved to the French capital city in 1922 with her young daughter and happened to meet master couturier Paul Poiret, who loaned the stylish Schiaparelli his clothes, sparking her own fashion interests.Schiaparelli debuted her first collection of knitwear in 1927, and later that year, she designed a black-and-white pullover hand-knit wool sweater featuring a trompe l’oeil bowknot that captured the attention of the fashion world. Vogue called it “an artistic masterpiece.” The success led to her moving her house to 21 Place Vendôme in 1935 where thousands of garments were produced each year. Schiaparelli’s knitwear collections were later accompanied by revolutionary swimsuits and other clothing and accessories. Her inventive designs would include culottes — a radical statement in the 1930s when women still could cause a scandal by wearing pants — as well as printed fabric, such as the 1938 Tears dress with a print designed by Dalí making it appear as if the evening gown had been savagely ripped.Schiaparelli was among the first designers to use materials like rayon and Lurex as well as explore wrap dresses and transparent raincoats. She also introduced unisex fragrances and brought her artistic partnerships into jewelry, such as bronze brooches made with Alberto Giacometti and fur-lined bracelets with Méret Oppenheim. As she wrote in her 1954 autobiography Shocking Life, women should “dare to be different.”Despite her acclaim, her shop closed in 1954 after a tumultuous time during World War II. By then, fashion had moved on with Christian Dior's New Look, and the closure of Schiaparelli's business coincided with a comeback mounted by Coco Chanel, her archrival in the early days. In 2006, Italian businessman Diego Della Valle acquired the brand and its archives, and the Maison Schiaparelli was reopened in 2012, back at 21 Place Vendôme where Schiaparelli's fearless and enduring work began. Find vintage Elsa Schiaparelli hats, evening dresses and other clothing and accessories on 1stDibs.
About the Seller
5 / 5
Located in North Miami, FL
Vetted Seller
These experienced sellers undergo a comprehensive evaluation by our team of in-house experts.
Established in 2005
1stDibs seller since 2015
165 sales on 1stDibs
Typical response time: 2 hours
More From This Seller

$3,500
Free Shipping
18 Karat White Clover Diamond Earrings 2 Carat
By Belfiore Jewelry
Located in Great Neck, NY
18K white gold diamond earring set in a clover Van Cleef shape. The earrings are set with baguette and round diamonds. The total carat weight is 2.12. The color of the stones are F, ...
Category