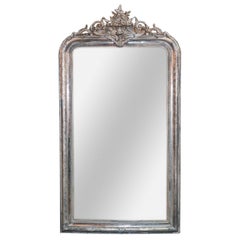 H 24 in. W 19.25 in. D 1.25 in.
Pair of Small 19th Century Italian Silver Gilt Mirrors
Located in Dallas, TX
From Italy, this charming pair of small antique silver gilt mirrors have a stylized acanthus form Fleur-de-lys at the top. Varying scrolls of acanthus leaves finish out the rest of t...
Category

H 56 in. W 35 in. D 5 in.
Pair of 19th Century French Silver Gilt Louis Philippe Mirrors
Located in Baton Rouge, LA
A spectacular pair of silver gilt Louis Philippe mirror, made in France, at the end of the 19th century. These classically styled mirrors are sought by designers and collectors both ...
Category

H 49 in. W 28 in. D 3 in.
Antique 19th Century French Silver Leaf Gilt Oval Mirror with Crest
Located in Casteren, NL
This beautiful oval mirror is partially silver leaf gilt. It has remnants of gold paint and it shows the bone color of the gesso. It features a top cartouche with a central scallop ...
Category

H 31.5 in. W 37.01 in. D 6.3 in.
Antique 19th-Century Silver Leaf Gilt French Louis Philippe Mirror with Crest
Located in Casteren, NL
A beautiful antique silver leaf gilt mirror that was made in northern France at the end of the 19th century. The mirror frame has the upper rounded corners typical for a Louis Phil...
Category

H 70.38 in. W 44 in. D 6 in.
Italian Neoclassic Silver Gilt Mirrors, Second Quarter of the 19th Century, Pair
Located in Atlanta, GA
Each frame with several layers of moldings, covered in silver with amber lacquer, the process known in Italy as "mecca", the mirrorplates later.
Category

H 37 in. W 21.5 in. D 4.5 in.
Large 19th Century Giltwood Framed Mirror
Located in Vancouver, British Columbia
This is a simple rectangular modern mirror set in a robust 19th century giltwood frame perfect for over a mantel (fireplace) or simply hanging on a wall.
Category

H 70 in. W 43.25 in.
French 19th Century Ebonized and Painted Oval Mirror
Located in Baton Rouge, LA
A wonderfully sized French oval mirror that is uniquely styled. Combinations of silver and gold metallic gilt sharply contrast the ebonized frame which has been decorated with round ...
Category

H 37 in. W 38 in.
Louis Philippe Gilt Mirror
Located in Great Barrington, MA
The Victorian mirror has a molded plaster-on-wood frame, the design of which are flowers, leaves and vines. Silvered mirror. The backing is wood wired for hanging.
Category

H 25.50 in. W 19 in. D 1.50 in.
Italian Silver-Gilt Crested and Footed Baroque Revival Wall Mirrors, Pair
Located in Philadelphia, PA
An unusual pair of silver-giltwood wall mirrors in the Baroque Taste, Italy, circa fourth quarter of the 19th century. Topped with leaf-carved crests, the oval mirror plates are f...
Category

H 64 in. W 41.5 in. D 5 in.
Large Federal Style Gilt Mirror
Located in Great Barrington, MA
Late 19th century Federal style silvered mirror is composed of alternating ribbed and smooth sectioned pilasters ending at the corners with square blocks. The backing is made up of s...
Category

H 48 in. W 25.50 in. D 3.50 in.
Large Federal Style Gilt Mirror
Located in Great Barrington, MA
Late 19th century Federal style silvered mirror is composed of alternating ribbed and smooth sectioned pilasters ending at the corners with square blocks. The backing is made up of s...
Category

H 107.88 in. W 69.69 in. D 1.97 in.
Gilt Biedermeier Wall Mirror with Silver Plated Half Rods, Austria, circa 1840
Located in Lichtenberg, AT
Exclusive gilt Biedermeier wall mirror with silvered half rods from the period circa 1840 in Austria. Impressing with beautiful floral stucco works, silver plated half rods and round...
Category

H 85 in. W 41 in. D 7 in.
Antique French Louis Quinze or Rococo Gold Gilt Mirror with Facetted Glass
Located in Casteren, NL
A beautiful antique French mirror in Louis Quinze style. It has the asymmetrical ornamentation typical for Louis Quinze and Rococo. The double-arched top features an intricate crow...
Category

H 70.48 in. W 41.74 in. D 3.94 in.
Napoleon III Rococò Style French Gilded Wood Mirror
Located in Prato, Tuscany
Sumptuous and elegant Rococo frame with mirror produced in France (Napoleon III), the gilding of the rich floral decorations is gold leaf, the mirror is original, it is ground and ma...
Category

H 71 in. W 40 in. D 23 in.
Pair of French Bronze Dore Mirrors with Mascarons and Floral Motifs, circa 1880
Located in Dallas, TX
This pair of small bronze doré mirrors are from France, circa 1880, and were made in the style of Louis XIV. The intricate bronze doré frames have a large cartouche at the top of ...
Category

Pair of French Bronze Dore Mirrors with Mascarons and Floral Motifs, circa 1880

H 1.19 in. W 16.93 in. D 12.21 in.
19th Century French Napoleon III Complete Gilt Bronze and Glass Liquor Box
Located in Dallas, TX
This elegant antique "Cave à Liqueur" was created in France, circa 1860. Standing on round feet, the rectangular liquor cave has a bronze structure fitted with glass and a mirrored b...
Category

How Much is a 19th Century Silver Gilt Mirror?