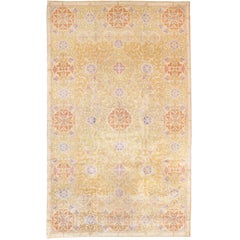 W 72 in. L 179 in.
Arts & Crafts Donegal Light Blue Wool Rug Attributed to Gavin Morton, circa 1910
By Gavin Morton
Located in Milan, IT
The Donegal carpet factory was responsible for the weaving of the most significant hand-knotted carpets of the Arts & Crafts period. Guided initially by British architect-designers s...
Category

W 34.26 in. L 68.9 in.
Donegal Runner, circa 1920s
Located in New York, NY
Seven unidirectional tulips/vases are neatly positioned up the cream field of this Irish runner in the Oushak manner the field and border are both in an stencil style without outline...
Category

W 138 in. L 219 in.
Gavin Morton Arts and Crafts Donegal Rug
By Gavin Morton
Located in New York, NY
This positively stunning antique Donegal rug from Ireland, the design of which is attributed to the widely admired Gavin Morton, boasts an absolutely delightful composition, the prof...
Category

W 141 in. L 189 in.
Antique Donegal Irish Rug
Located in New York, NY
This beautiful antique rug -- a piece produced by the famous Donegal rug makers of Ireland some time around the turn of the twentieth century -- represents a beautiful blending of cl...
Category

W 129 in. L 165 in.
Vintage European Donnemara Donegal Rug
By Charles Voysey
Located in New York, NY
A vintage English Donegal carpet in the style of Donnemara created by architecturally trained designer C.F.A Voysey whom was influenced by a fusion of the Arts and Craft Movement and...
Category

W 102 in. L 153 in.
Donegal Carpet, circa 1900
By Charles Voysey
Located in New York, NY
Over-scale pattern elements of fanciful organic forms scatter the field of this remarkable Donegal carpet, which was woven in Northern Ireland at the turn-of-the-century. The pattern...
Category

How Much are Arts Crafts Donegal Rugs?