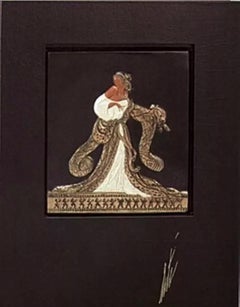 H 30 in. W 22 in.
Erte - Vintage Poster - Screen Print 1971
By Erté
Located in Roma, IT
Erte - Poster is a vintage screen print.. The poster was realized on the occasion of the artist's exhibition In Rome in Marino Gallery. Good conditions.
Category 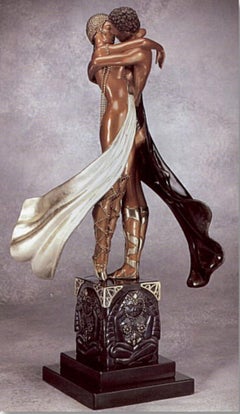 H 15 in. W 5 in.
Erte, Paysan, garçon
By Erté
Located in Chatsworth, CA
This piece is a unique, original gouache on paper by Erte, also known as Romain de Tirtoff. Erte was a vastly diverse artist who excelled in an array of fields including fashion, jew...
Category

H 36 in. W 24 in. D 0.1 in.
Erte, "Phi-Phi, décor fait pour les Bouffes-Parisiens", unique gouache
By Erté
Located in Chatsworth, CA
This piece is a unique, original gouache on paper by Erte, also known as Romain de Tirtoff. Erte was a vastly diverse artist who excelled in an array of fields including fashion, jew...
Category

H 36 in. W 26 in. D 0.1 in.
Letter "S" from Alphabet Suite (Signed Erté)
By Erté
Located in New York, NY
From the celebrated Alphabet Suite, this stunning Art Deco lithograph/serigraph was designed by the Russian-born French artist and designer known by the pseudonym Erté, and produced ...
Category

H 38 in. W 31.25 in.
Letter "Z" from Alphabet Suite (Signed Erté)
By Erté
Located in New York, NY
From the celebrated Alphabet Suite, stunning Art Deco lithograph/serigraph was designed by the Russian-born French artist and designer known by the pseudonym Erté, and produced by At...
Category

H 30 in. W 20 in.
Vamps Suite of Six Silkscreens by Erte
By Erté
Located in Long Island City, NY
A portfolio of six images by Erte from 1979. The Vamps Suite Portfolio includes a series of figures representing the fashionable Diva's in Erte's classic art deco style. Includes fo...
Category

H 17.25 in. W 7.5 in.
Vintage Erté's Exhibition Poster - Offset Print - 1971
By Erté
Located in Roma, IT
Vintage Erté Poster is an original offset poster about an exhibition of the famous "alphabet suite",held in Marino Gallery in Rome, Navona Square.
Category

Erte Art For Sale on 1stDibs

You are likely to find exactly the piece of erte art you’re looking for on 1stDibs, as there is a broad range for sale. In our selection of items, you can find Art Deco examples as well as a Modern version. You’re likely to find the perfect item from our selection of erte art among the distinctive items we have available, which includes versions made as long ago as the 20th Century as well as those made as recently as the 21st Century. On 1stDibs, the right choice in our collection of erte art is waiting for you and the choices span a range of colors that includes gray, beige, black and brown. These artworks were handmade with extraordinary care, with artists most often working in screen print, metal and bronze. A large object in our assortment of erte art can prove too dominant for some spaces — a smaller option in this array of erte art, measuring 1 high and 1 wide, may better suit your needs.

How Much is a Erte Art?