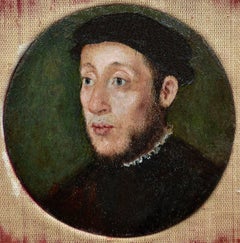 H 30.25 in. W 26 in.
16-17th century Italian figure painting - Anne - Oil on panel Renaissence
Located in Varmo, IT
Italian master of the 16th-17th century. - S. Anna with episodes of the Rest and the Flight into Egypt. Oil on panel, in a carved and gilded wooden frame. Condition report: Good ...
Category

H 26.6 in. W 22.45 in.
1887 Portrait Smith Taylor Whitehead Esq. in Theatrical 16th Century Costume.
By John Pettie
Located in Sutton Poyntz, Dorset
This original oil painting by John Pettie, dating from 1887, is presented and supplied in a frame dating from between the Wars (which is shown in these photographs). The frame dimen...
Category

Portrait of a Man

H 21 in. W 18.5 in.
Double Portrait of King Frederik IV and Queen Louise of Mecklenburg-Güstrow of D
Located in New Orleans, LA
When viewed straight on, this "turning picture" by French artist Gaspar Antoine de Bois-Clair appears to be a disorganized collection of painted facial features and wooden slats. How...
Category

H 19.25 in. W 16.38 in. D 1.63 in.
Sofonisba Anguissola Oil On Canvas Lombard School Italy Late '500
Located in Milan, IT
Oil on canvas. Lombard school. The painting, already attributed to Sofonisba Anguissola and presented as so to Hampel Auctions on 26/06/2014, has all the pictorial characteristics th...
Category

H 46.07 in. W 36.62 in.
Virgin and Child with the Infant Saint John
By Domenico Puligo
Located in New Orleans, LA
A masterful example of Italian Mannerist painting, this exceptional panel was composed by the renowned Florentine painter Domenico Puligo. Alongside Jacopo Pontormo and Rosso Fiorent...
Category

Domenico Puligo
Virgin and Child with the Infant Saint John, Circa 1515

H 16 in. W 11.5 in.
Portrait of a Young Lady
By Domenico Tintoretto
Located in New York, NY
Like many family-trained artists, Domenico Tintoretto began his career assisting his renowned father, Jacopo Tintoretto, in his Venice workshop. In 1576, when Domenico was seventeen ...
Category

H 27.5 in. W 21.5 in.
St. Peter the Martyr Oil Painting 16th Century
Located in Milan, IT
Oil painting on canvas. St. Peter Martyr or Saint Peter of Verona joined the Order of the Friars Preachers (Dominicans). He lived in the 13th century and devoted himself to the fight...
Category

H 32.68 in. W 26.38 in. D 2.37 in.
F. Fenzoni (Circle), Italian 16th century Religious Oil on Copper Painting
By Ferrau Fenzoni
Located in Firenze, IT
This dramatic rectangular oil on copper in gilt wood frame dates back to late 16th-early 17th century and describes a religious scene. It is a beautiful Italian work of art represen...
Category

H 40.16 in. W 32.29 in. D 1.19 in.
Portrait of a Gentleman with Skull, Memento Mori oil on panel
Located in London, GB
This early oil on oak panel depicting a gentleman in a black costume with a white collar and matching wrist cuffs, sits within a genre known as memento mori. In medieval times the t...
Category

Portrait of a Gentleman with Skull, Memento Mori oil on panel, 16th Century

H 21.66 in. W 17.33 in.
Portrait of Richard Tomkins (c.1532-1603), Elizabethan oil on panel
Located in London, GB
This portrait descended from the sitter through the family for almost 450 years, until recently. It is a splendid survival from the Elizabethan era - the golden age in England’s his...
Category

H 42.33 in. W 34.65 in.
Portrait of a man with sword, Oil on Board, Lombard School 1500
Located in Milan, IT
Oil on board. Lombard School. Portrait of a young men wearing civil clothes. His face stands out in the dark background with a sword that he's holding from the refined hilt pointing ...
Category

H 28.35 in. W 24.81 in.
Tudor Court Portrait
Located in London, GB
The Tudor period is the period between 1485 and 1603 in England and Wales and includes the Elizabethan period during the reign of Elizabeth I until 1603. The Tudor period coincides ...
Category

Lavinia Fontana
Portrait of A Girl

Beautiful Renaissance Portrait of an Italian Gent, circa1500

H 17 in. W 12.25 in.
Portrait of a Young Man att. to Vittore Belliano
By Vittore Belliniano
Located in London, GB
Belliniano (active 1507-29), also known as Vittore di Matteo, was a Pupil of the Venetian master Gentile Bellini, and also came under the influence of another great early 16th Veneti...
Category

H 17.33 in. W 13 in.
Portrait of George Peele (c.1557-c.1596), Very early Elizabethan panel
Located in London, GB
In this Elizabethan panel portrait, a gentleman has been depicted wearing a fashionable red slashed doublet, white ruff, and a cape. According to the inscription the sitter was aged...
Category

H 42 in. W 32 in.
Worship of the Shepherds
Located in Milan, IT
Oil painting on canvas, The Worship Of the Shepherds. Restored. We attribute it to Giovan Battista Della Rovere, also known as 'Il Fiamminghino', and to his workshop. We find the fea...
Category

Worship of the Shepherds

H 33.86 in. W 51.97 in.
The virgin with child and Saint John
Located in Milan, IT
Oil painting on canvas, the Holy Virgin with Child and Saint John. The painting, because of its construction, colors, and physiognomies, is connected to the Bologna area of the late ...
Category

The virgin with child and Saint John

H 47.25 in. W 37.01 in.
Christ in the House of Martha and Mary
Located in Milan, IT
Oil on canvas, attributed to the school of Jacopo de Negreto, better known as 'Palma il Vecchio' (1480-1528). The scene depicts Christ, accompanied by the apostles, while, in Lazarus...
Category

Christ in the House of Martha and Mary

H 16.5 in. W 13.5 in.
St. Francis Worshiping the Crucifix Oil on Copper Late 1500s
Located in Milan, IT
Oil on copper presented in a vintage frame. On the back of the painting there is an attribution to Carracci and a two sealing waxes belonging to the Piccolomini collection (a cross s...
Category

H 43.71 in. W 35.04 in.
Italian Old Master portrait in the manner of Botticelli, oil on panel
Located in Petworth, GB
Italian School, 16th Century, in the manner of Sandro Botticelli Maiden before a wooded landscape Oil on panel, in a gilded tabernacle frame with blue inner sections and black exteri...
Category

Italian Old Master portrait in the manner of Botticelli, oil on panel

How Much is a Portrait 16th Century Oil?

The price for an artwork of this kind can differ depending upon size, time period and other attributes — a portrait 16th century oil in our inventory may begin at $6,083 and can go as high as $453,190, while the average can fetch as much as $42,487.