Tom Cruise
By Annie Leibovitz
Located in Vienna, AT
Two part portrait of the Hollywood movie actor wearing a blue shirt. PREISS FINE ARTS is one of the world’s leading galleries for fine art photography representing the most famous c...
Category 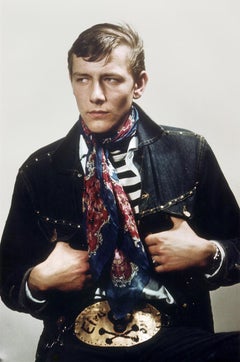 H 30 in. W 40 in.
Bob Colacello in Drag
By Andy Warhol
Located in Los Angeles, CA
Bob Colacello is a writer and a regular contributor to Vanity Fair Magazine. The former editor of Interview Magazine, Colacello was first approached by Andy Warhol after publishing a...
Category

Mark Morrisroe
[Self Portrait at Home with Diane Arbus], 1985

H 60 in. W 60 in. D 2 in.
Vintage Silver Gelatin Photograph Marvel Comic Book, Amazing Spider Man Pop Art
Located in Surfside, FL
This is a vintage silver gelatin photo of either Stan Lee or John Romita (I believe it is Romita but I am not sure) overlayed with a comic strip in a surrealist style. John Romita i...
Category

H 19.75 in. W 23.75 in.
June Omura
By Annie Leibovitz
Located in Palm Desert, CA
This nude portrait by famed fashion photographer Annie Leibovitz creates an abstracted view of the figure with its close-up composition. The cool blue and green hues are complimented...
Category

Find wide variety of authentic Annie Leibovitz photography available for sale on 1stDibs. You can also browse by medium to find art by Annie Leibovitz in silver gelatin print, pigment print, archival pigment print and more. Much of this artist's original work was created during the 21st Century and Contemporary, and is mostly associated with the Pop Art style. Not every interior allows for large Annie Leibovitz photography, so small editions measuring 13.5 inches across are available. Customers interested in this artist might also find the work of Anthony Goicolea, Fabien Mara and Jeffrey Silverthorne. On 1stDibs, the price for these items starts at $6,000 and tops out at $18,000, while the average work can sell for $12,500.