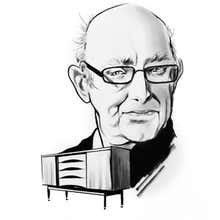 Along with Vernor Panton, cabinetmaker and architect Arne Vodder was a leading light of what might be called the “second generation” of forward-thinking 20th-century Danish furniture designers — those who, following in the footsteps of Hans Wegner, Arne Jacobsen, Finn Juhl and others, first applied the skills, traditions and philosophical tenets of Scandinavian craftsmanship to a modern furniture idiom.

As a graduate student in architecture trained by pioneering furniture designer Finn Juhl, Vodder made his mark in the 1960s, when modern design had gained wide acceptance, particularly in the business world. Accordingly, many of Vodder's chairs are quiet in form — projecting an air of sturdiness and strength, rather than avant-garde styling.

Vodder’s aesthetic flair was very pronounced in his vintage cabinets and storage pieces — sideboards, bookcases, credenzas and buffets. In such pieces, Vodder liked to play with asymmetry. His bookcases often have a seemingly random array of variously sized shelves and nooks. A typical Vodder sideboard might have four sections, each different in purpose and look: an open stack of vertical shelves, and other cupboards covered with sliding panels in contrasting colored laminates and wood veneers.

As you will see from the works on 1stDibs, Arne Vodder had a sense of what kind of design was appropriate for which space: sobriety in the boardroom; playfulness at home.

Brazilian Rosewood Sideboard Model 29A by Arne Vodder for Sibast
By Arne Vodder, Sibast
Located in Little Burstead, Essex
This is one of the finest, most original pieces of Classic Scandinavian Modern furniture we have had the pleasure to own in 25 years of dealing in Classic design. It has never been ...
Category

Brazilian Rosewood Sideboard Model 29A by Arne Vodder for Sibast

Arne Vodder Credenza Teak Sideboard Model 29
By Arne Vodder
Located in San Diego, CA
This is the iconic credenza Model 29, designed by Arne Vodder for Sibast. The doors are reversible with matte black lacquer on one side and teak on the other. The sideboard has 6 dra...
Category

Arne Vodder Model 29A Credenza in Teak for Sibast, Denmark, 1950s
By Arne Vodder
Located in Santa Fe, NM
An icon of Danish design, this gorgeous piece by Arne Vodder is incredibly impressive in person. A centerpiece in any interior.
Category

Rare and Elegant No. 36 Sideboard by Arne Vodder
By Arne Vodder
Located in Munich, DE
Made by sibast. Does have a real back and can be used as room divider.... 2 tambour doors with shelves and drawers. A bar behind the right door. Lacquered teakwood.
Category

Rare and Elegant No. 36 Sideboard by Arne Vodder

Arne Vodder Executive Desk and Return in Brilliant Condition
By Sibast, Arne Vodder
Located in South Charleston, WV
Located here in the United States so there will be no restrictive delays common to Palisander from abroad requiring certificates. Please see video for a complete view. An uncommon mo...
Category

H 29 in. W 79.5 in. D 35 in.
Previously Available Items
Arne Vodder Executive Desk and Return in Brilliant Condition
By Sibast, Arne Vodder
Located in South Charleston, WV
Located here in the United States so there will be no restrictive delays common to Palisander from abroad requiring certificates. Please see video for a complete view. An uncommon mo...
Category

H 29.14 in. W 72.05 in. D 19.69 in.
Arne Vodder Sideboard "Model 29A" by Sibast, Denmark
By Arne Vodder
Located in Lyon, FR
Rare Danish sideboard designed by Arne Vodder for Sibast in 1958. Made of rosewood, the sideboard is composed of two sliding doors, seven drawers and one swing door. Sliding doors ...
Category

H 31.5 in. W 18.9 in. L 98.43 in.
Mid 20th Century Danish Arne Vodder Rosewood Sideboard
By Arne Vodder
Located in London, GB
This beautiful rosewood 1960s sideboard is attributed to Arne Vodder. It is in brilliant condition having being newly restored, with a gorgeous deep tone of rosewood with a lovely gr...
Category

H 31.5 in. W 83.08 in. D 20.08 in.
Arne Vodder Rosewood Tambour Doors Sideboard OS 63 for Sibast, Denmark, 1960
By Arne Vodder, Sibast
Located in Le Grand-Saconnex, CH
Refined sideboard in rosewood, designed by Arne Vodder for the danish cabinetmaker Sibast. On the back of the top is a discreet winglet, to avoid any object falling. On the left we...
Category

H 45.28 in. W 19.49 in. D 71.86 in.
Teak Credenza with Reversible Black Panel Doors by Arne Vodder for Sibast Signed
By Sibast, Arne Vodder
Located in Kansas City, MO
Danish modern teak credenza / sideboard / media cabinet / storage cabinet with reversible doors. Teak on one side, black lacquer on the other. An important sought after design by Arn...
Category

Arne Vodder credenzas are available for sale on 1stDibs. These distinctive objects are often made of wood and designed with extraordinary care. There are many options to choose from in our collection of Arne Vodder credenzas, although brown editions of this piece are particularly popular. We stock 23 vintage versions of these items, while there is 0 modern edition to choose from as well. Many of Arne Vodder's original credenzas were created in Scandinavian modern style during the mid-20th century. If you’re looking for additional options, many customers also consider credenzas by Ib Kofod-Larsen, Hans J. Wegner and Sibast. The prices for Arne Vodder credenzas can vary depending on size, time period and other attributes. The price for these items starts at $5,828 and tops out at $45,155, while pieces like these can sell for $12,500 on average..