Craig McPherson was born in Wichita, Kansas, in 1948. After receiving a bachelor of fine arts degree at the University of Kansas, in 1970, he spent the following years curating and lecturing for the National Endowment for the Arts. He was the director of the Michigan Artrain, before taking up residence in New York, in 1975, to develop his career as an artist. His work has been exhibited in one-man gallery shows in New York, where he is represented by Forum Gallery and in group shows, all over the world. His body of work also includes a number of corporate and museum commissions. In 1998, he had his first museum retrospective at The Fitzwilliam Museum, in Cambridge, England. The show traveled to The Hunterian Museum in Glasgow, Scotland. In 2008, McPherson was commissioned by the Frick Museum to create an exhibition reflecting the heritage of steel production in Pittsburgh, as part of Pittsburgh’s 250th-anniversary celebration. His most recent show at Forum Gallery, "Steel/Stage" focused on images from heavy industry, experimental theater and theater interiors. Since the mid-90s, McPherson has been working with a broad range of imagery, including landscape, natural phenomenon, near abstraction and the human figure. He has combined metaphoric elements and performers from the experimental theater. The New York Times critic, Ken Johnson, called his 2001 show featuring a 60-foot pastel of water, "a spectacular tour de force." He wrote It verges on abstraction, yet produces an enveloping cinematically lush effect. Craig's work is included in numerous museum, corporate and private collections in the U.S. and abroad. 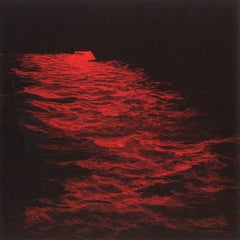 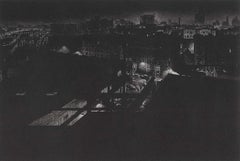 Hemp Lines
By Craig McPherson
Located in New Orleans, LA
Craig McPherson's Hemp Lines is #15 in an edition of just 25. It is another image that illustrated the artist's fascination with theatre settings both on stage and behind Craig McP...
Category

Eye of the Storm (a dramatic New York City skyline during a storm's lull)
By Frederick Mershimer
Located in New Orleans, LA
Category

Frederick Mershimer
Eye of the Storm (a dramatic New York City skyline during a storm's lull), 2006