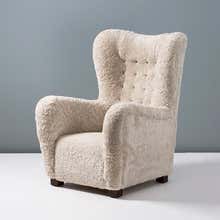 When the Copenhagen-based furniture maker Fritz Hansen opened for business more than 140 years ago, the company — which today styles itself The Republic of Fritz Hansen — adhered to the traditional, time-honored Danish values of craftsmanship in woodworking and joinery. Yet thanks to the postwar innovations of Arne Jacobsen and others, Fritz Hansen would become the country’s leader in Scandinavian modern design using new, forward-looking materials and methods.

Everything changed in 1952 with Arne Jacobsen’s Ant chair. The collaboration between the architect and Fritz Hansen officially originated in 1934 — that year, Jacobsen created his inaugural piece for the manufacturer, the solid beechwood Bellevue chair for a restaurant commission. The Ant chair, however, was the breakthrough.

With assistance from his then-apprentice Verner Panton, Jacobsen designed the Ant chair for the cafeteria of a Danish healthcare company called Novo Nordisk. The chair was composed of a seat and backrest formed from a single piece of molded plywood attached, in its original iteration, to three tubular metal legs. Its silhouette suggests the shape of the insect’s body, and the lightweight, stackable chair and its biomorphic form became an international hit.

Find a collection of vintage Fritz Hansen tables, lounge chairs, sofas and other furniture on 1stDibs.

Set of 8 Danish Desk Chairs in by Jørgen Rasmussen

Arne Jacobsen for Fritz Hansen Swan Chair in Blue
By Fritz Hansen, Arne Jacobsen
Located in Hudson, NY
The beautiful Swan™ chair was designed by Arne Jacobsen in 1958 for the lobby and lounge areas of the SAS Royal Hotel in Copenhagen. The design contains no straight lines, making it ...
Category

1974 Original Brown Leather Arne Jacobsen for Fritz Hansen Egg Chair & Ottoman
By Arne Jacobsen, Fritz Hansen
Located in Chattanooga, TN
Yes, this is the original leather from birth in 1974. Miraculously bereft of any significant visible flaws lo these many years, this leather will make you salivate. The color changes...
Category

Vintage Pair Swan Chairs & Egg Footstool in Leather & Aluminum by Arne Jacobsen
By Arne Jacobsen, Fritz Hansen
Located in Brooklyn, NY
Arne Jacobsen designed the Swan as well as the Egg for the lobby and lounge areas at the SAS Royal Hotel in Copenhagen, in 1958. The commission to design every element of the hotel b...
Category

Egg Chair and Ottoman by Arne Jacobsen for Fritz Hansen
By Fritz Hansen, Arne Jacobsen
Located in Dorchester, MA
Unveiled at the Royal Copenhagen Hotel in Denmark in 1958, the poster child of Danish design has become one of the most coveted chairs of all time. Fifty years after Danish designer ...
Category

Arne Jacobsen for Fritz Hansen Swan Chair in Periwinkle
By Arne Jacobsen, Fritz Hansen
Located in Hudson, NY
The beautiful Swan™ chair was designed by Arne Jacobsen in 1958 for the lobby and lounge areas of the SAS Royal Hotel in Copenhagen. The design contains no straight lines, making it ...
Category

Set of Five Oxford Swivel Chairs in Brown Leather by Arne Jacobsen, Design 1965
By Arne Jacobsen, Fritz Hansen
Located in Hellouw, NL
Set of five 'Oxford Chairs' swivel dining chairs with brown leather upholstery and a metal frame. These chairs, with model 3171, are designed in 1965 and executed at a later date by ...
Category

1stDibs Fritz Hansen Swivel Chairs are available for sale. These distinctive objects are frequently made of metal and designed with extraordinary care. In our Fritz Hansen collection of swinging chairs, there are many options to choose from, although brown editions of this piece are particularly popular. We stock 25 vintage versions of these items, while there is 0 modern edition to choose from as well. Many of the original Swivel Chairs by Fritz Hansen were created in Scandinavia during the 20th century in the Mid-Century Modern style. If you’re looking for additional options, many customers also consider swivel chairs by Jørgen Rasmussen, Bramin Møbler and Arne Jacobsen. Prices for Fritz Hansen swing chairs can vary depending upon size, time period and other attributes. Price for these items starts at US$900 and tops out at US$22,449, while pieces like these can sell for US$4,036 on average.