Geneviève Claisse was born in Quiévy in 1935. Its pictorial vocation is born from the reading of the magazine «Art d'aujourd'hui», tribune of geometric abstraction. Her work is a rigorous exploration of this path and she will never be tempted to stray from it. “Schoolgirl, I was already abstract,” she said.

In 1958, she adhered to the ideas of the current Abstraction Création created by Herbin. In 1960, his contribution to the Salon de Mai shows a work of organization of space rich in colors, where already the play of simple forms and that, subtle, of colors, strike by its vigor and its sensitivity. In 1961 her first exhibition was organized at the Denise René Gallery in Paris, where she has been exhibiting regularly.

In the 1965’s, she accentuated the work on color. It was during these years that Geneviève Claisse stood out from the influence of Auguste Herbin and Mondrian. In the mid-1960s, triangle and circle become, treated separately, its formal vocabulary which introduces it into kinetic research applied to surfaces. It then focuses on the purification of its creations, always and inevitably geometric, both in terms of shape and color choice. Reflections and research accompany an overflowing creativity, in parallel with the development of optical art and kinetic art. In 1967, the Musée des Beaux-Arts de la Chaux-de-Fonds exhibits works from the past ten years, then a great Swiss collector exhibits in Zürich, alongside works by great masters of contemporary art, about thirty paintings of Claisse acquired between 1959 and 1967. Other important exhibitions will show his work over time (Oslo, Alençon, Lille, etc.). In 1989, a retrospective of his work was organized at the Matisse Museum in Cateau-Cambrésis.

Cercles jaune
By Geneviève Claisse
Located in Tbilisi, GE
Wooden sculpture with neon lights comes with electrical installation Signed at the back, in marker
Category 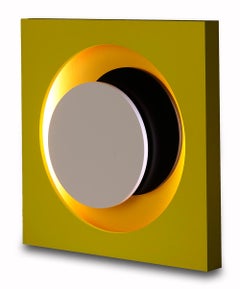 Cercle rouge
By Geneviève Claisse
Located in Tbilisi, GE
Wooden sculpture with neon lights; comes with electrical installation - Signed at the back. Signes In marker Edition of 4
Category 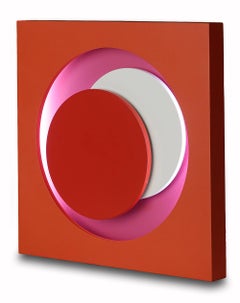 Jazz
By Geneviève Claisse
Located in Tbilisi, GE
Steel sculpture on plexi foot Hand signed and numbered at the back by the artist; Edition of 8 + II
Category

Cercles vert
By Geneviève Claisse
Located in Tbilisi, GE
Wooden sculpture with neon lights comes with electrical installation Signed at the back, in marker
Category

Find a wide variety of authentic Geneviève Claisse art available for sale on 1stDibs. If you are looking for art to add a pop of color to a neutral corner of your living room or bedroom, you can find work that includes elements of green, purple, blue and other colors. You can also browse art by Geneviève Claisse in mixed media, digital print, wood and more. Much of this artist's original work was created during the 21st Century and Contemporary, and is mostly associated with the Contemporary style. Not every interior allows large Geneviève Claisse art, so small editions measuring 6.699999809265137 inches across are available. Customers who are interested in this artist might also find the work of Christina Massey, James Coignard and George Braque. Geneviève Claisse Art Prices vary depending upon medium, time period and other attributes. On 1stDibs, the price for these items starts at $334 and tops out at $45,000, while the average work can sell for $574.