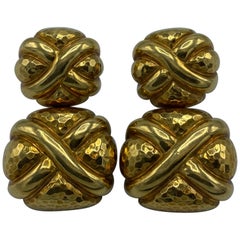 W 0.5 in. L 1.2 in.
1980's Vintage Lalounis Gold Hoop Earrings
By Ilias Lalaounis
Located in Toronto, Ontario
1980’s Ilias Lalounis 18 karat hammered gold clip on earrings from the Paleolithic collection. The talon part is worn at the front and a hinge is hidden in the hardware below. Stampe...
Category