Louis Ritman, Known primarily for his sunny, Impressionist landscape paintings, often with figures, earned much of his reputation for the work he produced during the time he was in Giverny, France, home of Claude Monet, a key Impressionist. Born in Kamenets-Podolsky, Russia, Ritman emigrated with his family to Chicago in 1903 and first traveled from his home in Chicago to Paris in 1910 when he could afford the art training there that so many American artists felt was crucial to professional achievement. Ritman enrolled at the Ecole des Beaux-Arts and the Academie Julian, but the turning point in his career was meeting Impressionist Frederick Frieseke at a cafe in Paris. Frieseke invited him to Giverny, where Ritman first went in 1911 and from that time his style changed from Academic to Impressionist. The small town with beautiful gardens and landscape vistas and quaint rural scenes was full of American artists including Frieseke and Richard Miller, with whom he painted. The atmosphere was one of encouraging artists to experiment with various styles of painting and Ritman returned each year until 1929. Ritman’s style is both Impressionist and Intimist, genteel and reserved in tone, with single figures, especially attractive young women, in confined landscapes and interiors. Ritman painted en plein air but often within his walled garden.

Louis Ritman
Nymph in a Boat

Louis Ritman
Cottage on a Hill 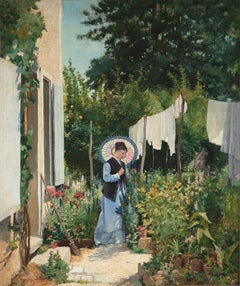 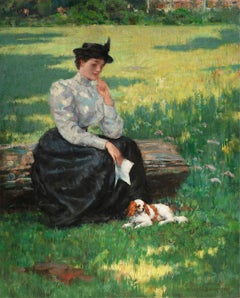 Summer at the Pier
By Reginald Marsh
Located in New York, NY
Category

Reginald Marsh
Summer at the Pier

Burlesque (on verso: Girls by the Waterfront)
By Reginald Marsh
Located in New York, NY
Category

Reginald Marsh
Burlesque (on verso: Girls by the Waterfront), 1946