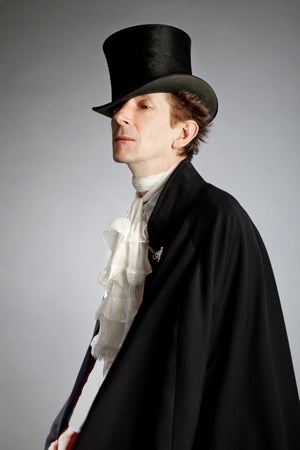 David is a celebrated London based interior designer, who works principally on high-end residential and commercial projects both here in the UK and abroad.

He has been running his interior design practice for almost 25 years, providing his expertise to an international clientele that has included Middle Eastern potentates, Captains of industry and City professionals. He works for people who don’t want an ‘off-the-peg’ design solution, but who are looking for something special, unique and bespoke.

His unique vision and the haunting beauty of his interiors have always attracted a huge amount of coverage in the world’s most influential design magazines. He has twice been shortlisted for the highly prestigious Andrew Martin International Interior Designer of the Year Award (widely regarded as the ‘Oscars’ of the interior design industry), has regularly appeared on the AD (Architectural Digest) list of the world’s most influential designers, and has popped up on many other lists published over the years celebrating the most creative and culturally significant designers working today.

What you get with David is a passionate exponent of a ‘grand’ design. Never bland or predictable, his work is driven by strong ideas and a conviction that a successful interior should reach out and touch our emotions.

The qualities that define a Carter interior are glamour, luxury and wit, but this is also combined with an uncompromising commitment to quality and a sharp eye for detail.

His signature style might loosely be described as ‘contemporary classic’, and he is equally adept at conjuring up all the theatrical flamboyance of a Marie Antoinette-inspired boudoir as he is masterminding the muted machismo of a Bond-esque bachelor pad. All share his bold romantic vision.

The World of Interiors described his work as a 'masterly invention... at once grandiose, ephemeral and unreal, a carefree, unholy mixture of styles for which taste is the only reference. He is an illusionist and conjurer'.

AD Italy recently wrote: ‘when it comes to design, David Carter is a master of illusion… his creations have the power to magically awaken the romantic in everyone, leaving them gasping for breath’.

The Economist’s Intelligent Life called him an ‘elegant sliver of fin-de-siècle aestheticism’.

Step inside this five-storey, 19th-century terraced house in north London full of surprises
A masterclass in the unconventional...
Read More