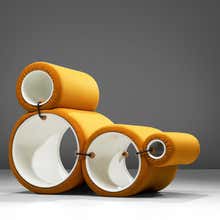 Portability and adaptability were keynotes of many Colombo designs, made for a more mobile society in which people would take their living environments with them. One of his most striking pieces is the Tube chair (1969). It comprises four foam-padded plastic cylinders that fit inside one another. The components, which are held together by metal clips, can be configured in a variety of seating shapes. Tube chairs generally sell for about $9,000 in good condition; Elda chairs for about $7,000. A small Colombo design such as the plastic Boby trolley — an office organizer on wheels, designed in 1970 — is priced in the range of $700. As Colombo intended, his designs are best suited to a modern decor. As you see on 1stDibs, if your tastes run to sleek, glossy Space Age looks, the work of Joe Colombo offers you a myriad of choices.

Joe Colombo Spider Table Lamp for Oluce, Italy
By Oluce, Joe Colombo
Located in RHEEZERVEEN, Overijssel
This black spider lamp spreads a direct light and therefore works perfect as a desk lamp. The reflector can be tilted left and right and moved up and down. .
Category

Acrilica 281 by Gianni & Joe Colombo for Oluce
By Joe Colombo, Oluce
Located in Vienna, AT
The Oluce Acrilica 281 is a table lamp, with a transparent, wavy diffuser fixed laterally on a steel base. It was created in 1962 and designed by Gianni as well as Joe Colombo. The e...
Category

Rare Vintage Original Joe Colombo Coupe Arc Floor Lamp for Oluce
By Joe Colombo
Located in Chicago, IL
This is a period example in the deep reddish chocolate enamel color. Overall fine condition. The shade has some dents that I am looking into having repaired. As the metal is quite so...
Category

Hat by Joe Colombo for Stilnovo, 1970's
By Joe Colombo, Stilnovo
Located in AMSTERDAM, NL
Designed by Joe Colombo produced by Stilnovo ( Italy) around 1970 in used condition this is the big version. Cesare "Joe" Colombo was until 1949 educated at the Accademia di Belle...
Category

Pair of Model 1139 Fresnel Sconces by Joe Colombo for Oluce

Acrilica Table Lamp by Joe Colombo for Oluce
By Oluce, Joe Colombo
Located in Brooklyn, NY
The Acrilica table lamp designed by Marco Zanuso Soto for Oluce. Initially known as the 281 model, created in 1962, and was immediately nicknamed “Acrilica” due to the surprising inn...
Category

Joe Colombo lighting is available on 1stDibs for sale. These distinctive objects are frequently made of metal and designed with extraordinary care. There are many options in our Joe Colombo lighting collection, although black editions of this piece are particularly popular. We have 67 vintage editions of these items in-stock, while there are also 71 modern editions to choose from. Many of the original lighting by Joe Colombo were created in the Mid-Century Modern style in Europe during the 21st Century and Contemporary. If you are looking for additional options, many customers also consider lighting by Angelo Mangiarotti, Vico Magistretti and Achille Castiglioni. Prices for Joe Colombo lighting can vary depending on size, time period and other attributes. On average, these items start at $488 and top out at $8,634, while pieces like these can sell for $1,417.