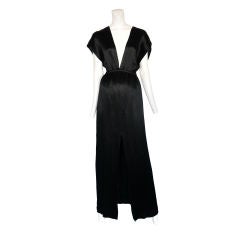 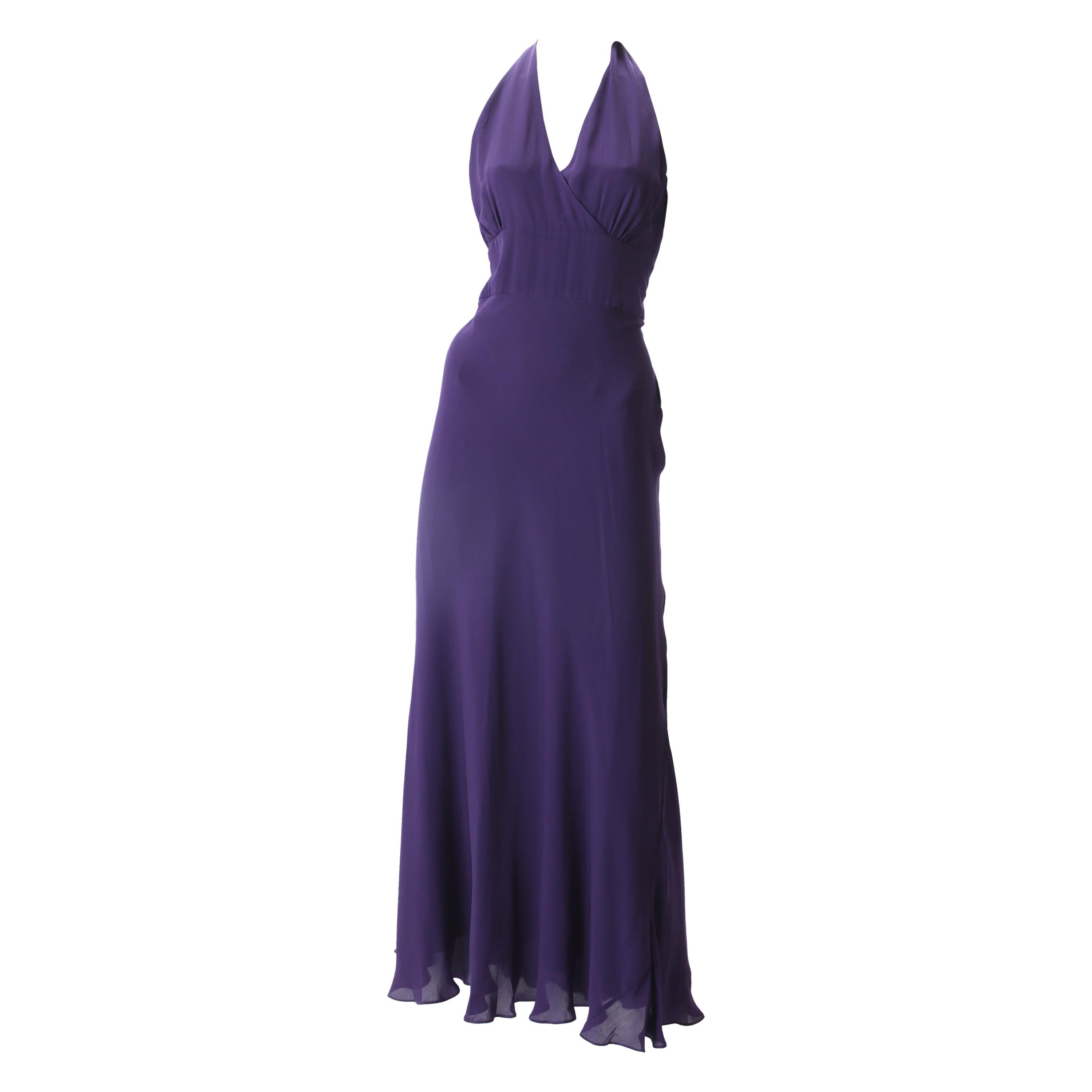 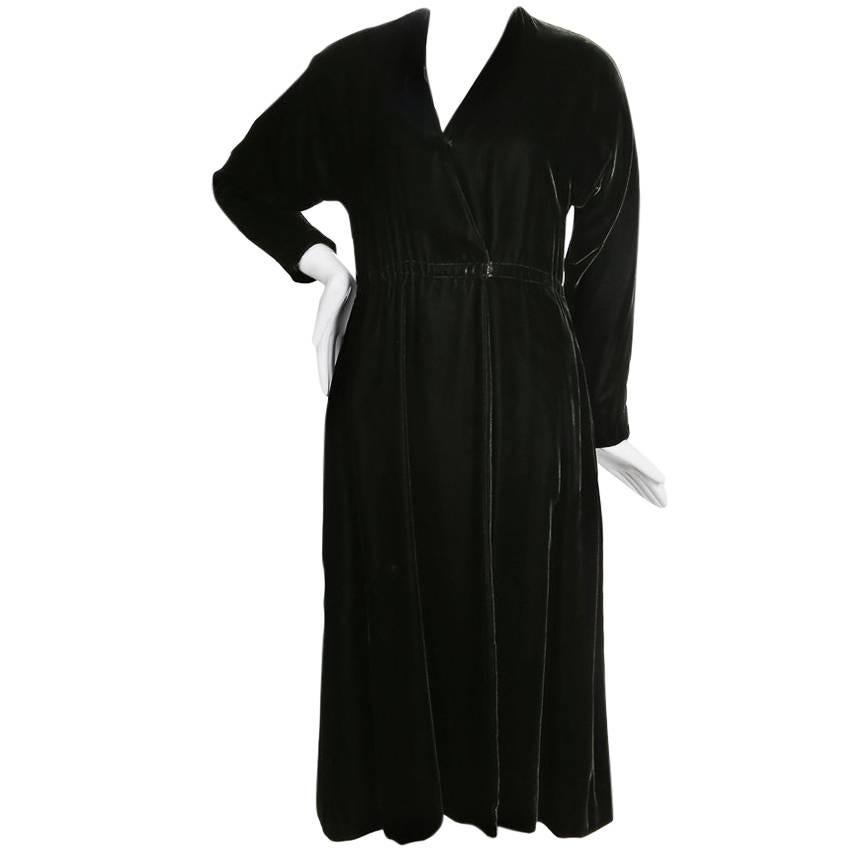 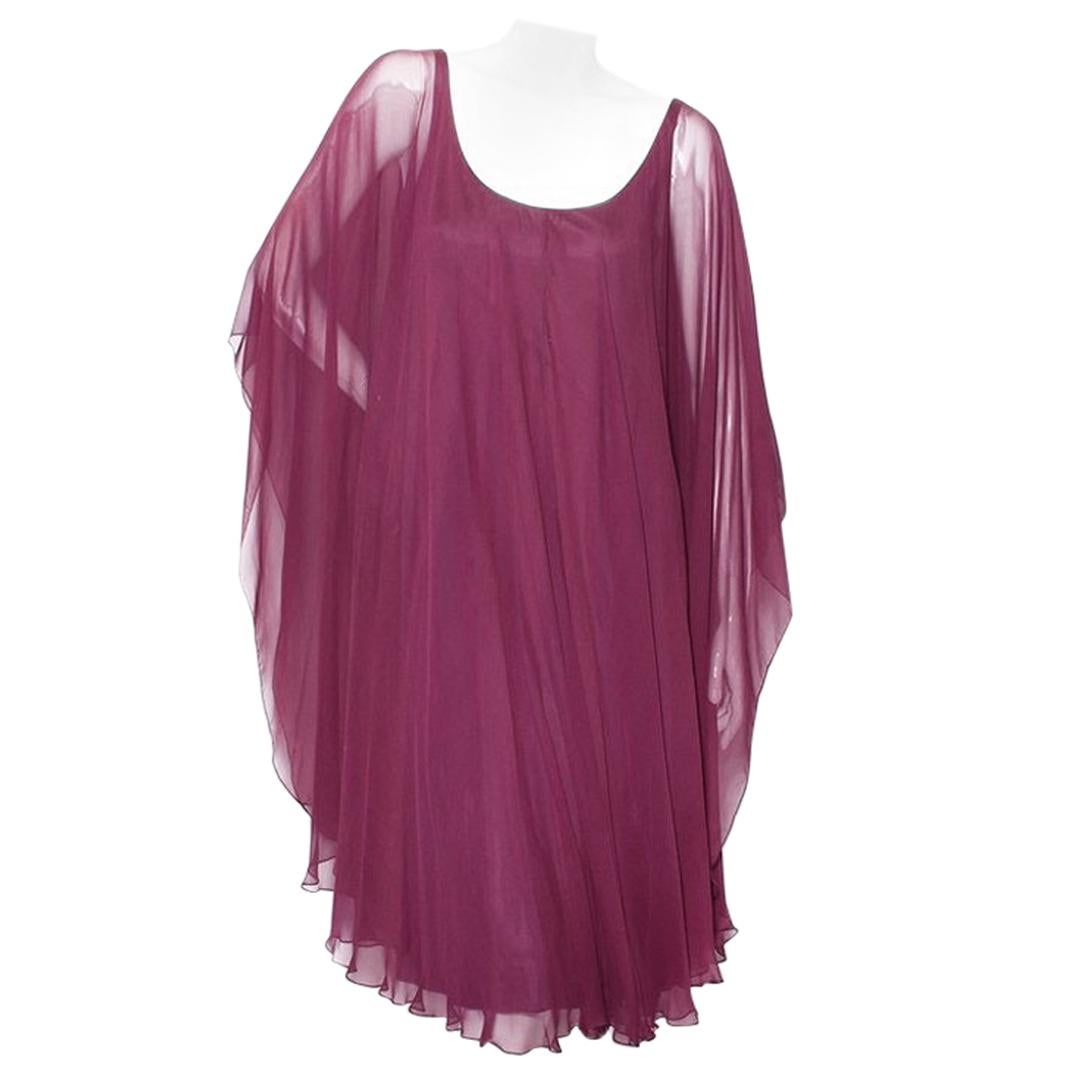 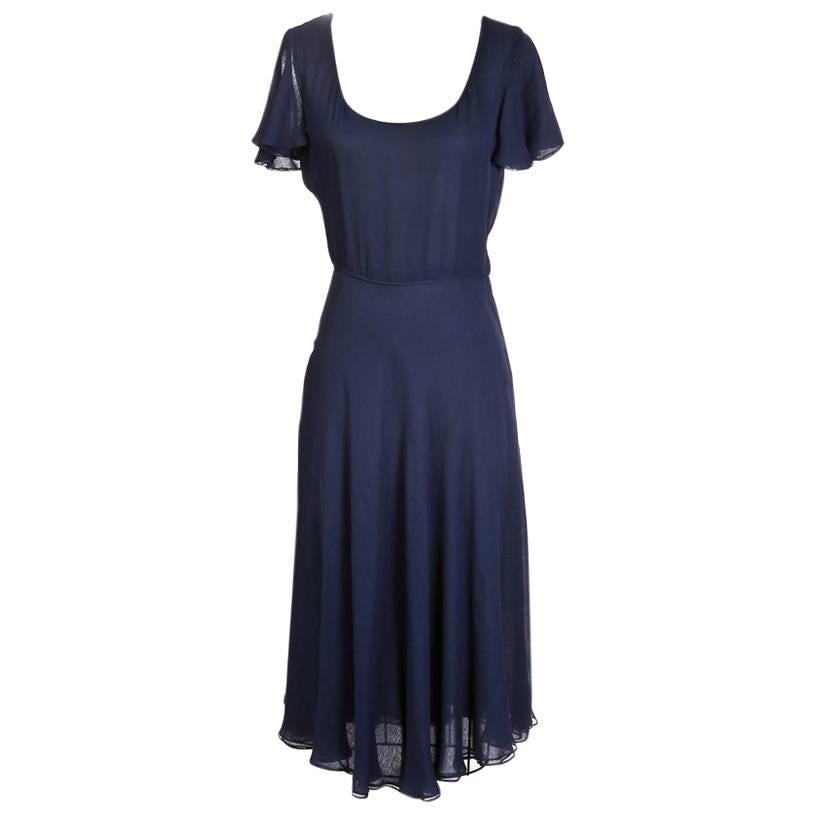 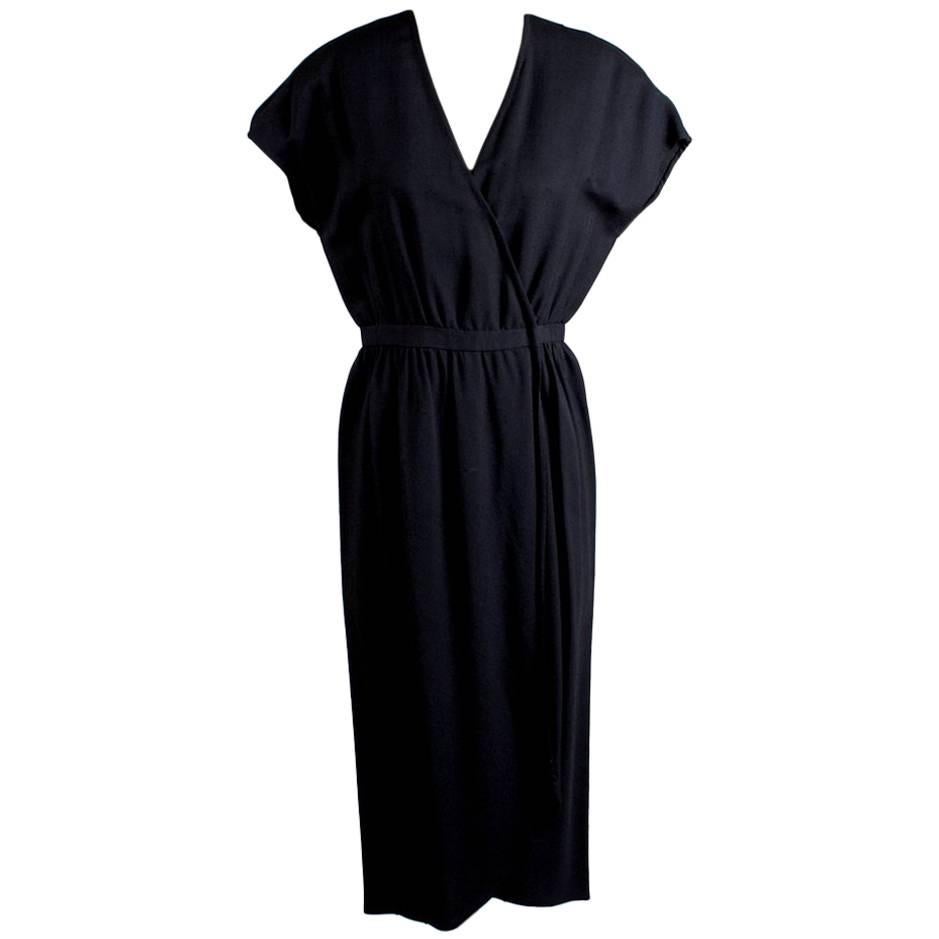 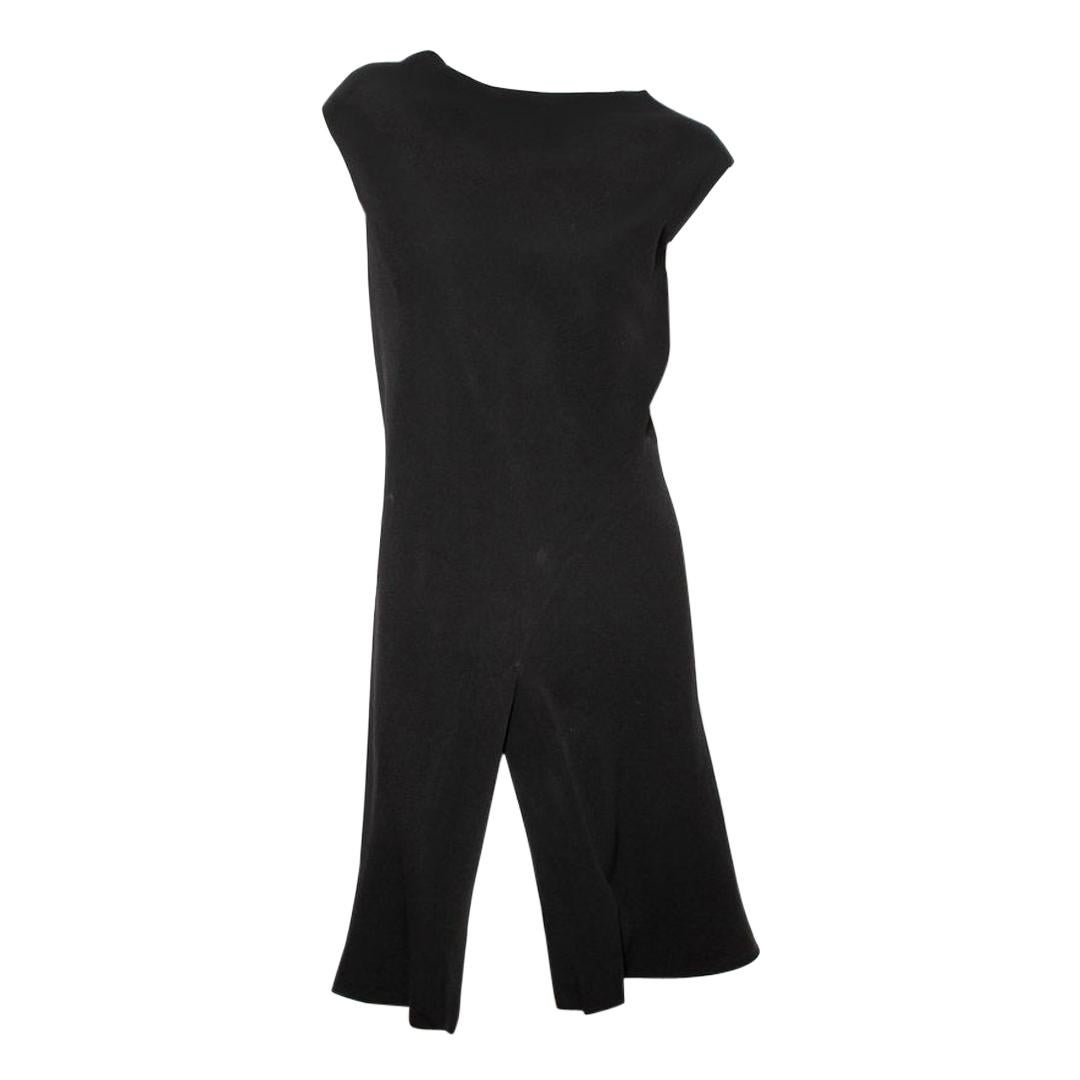 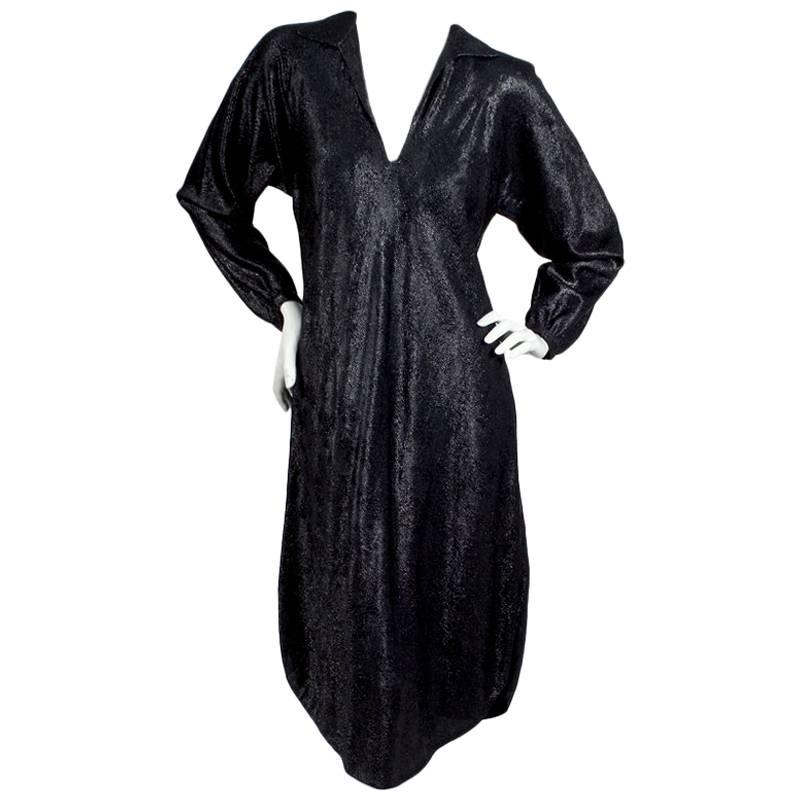 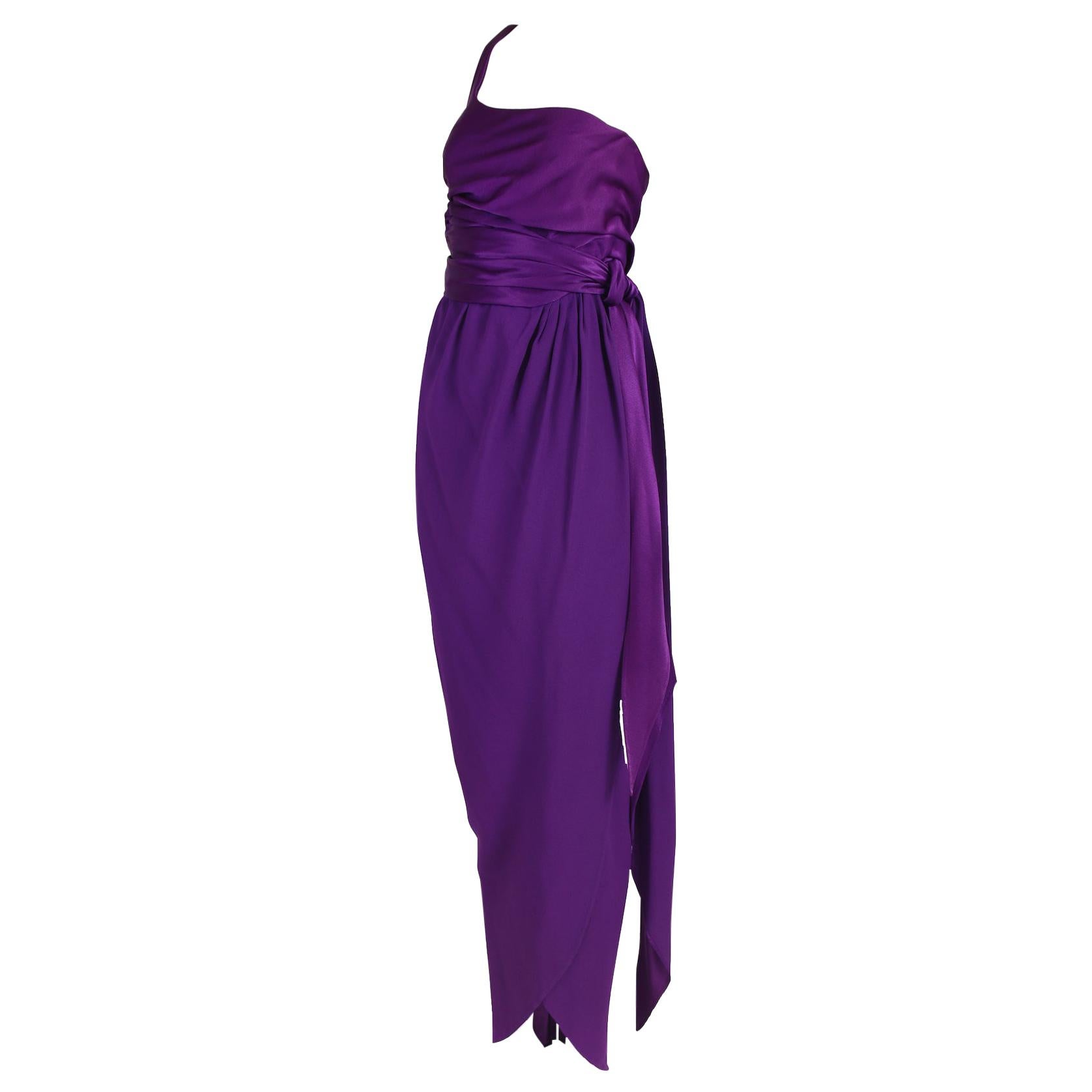 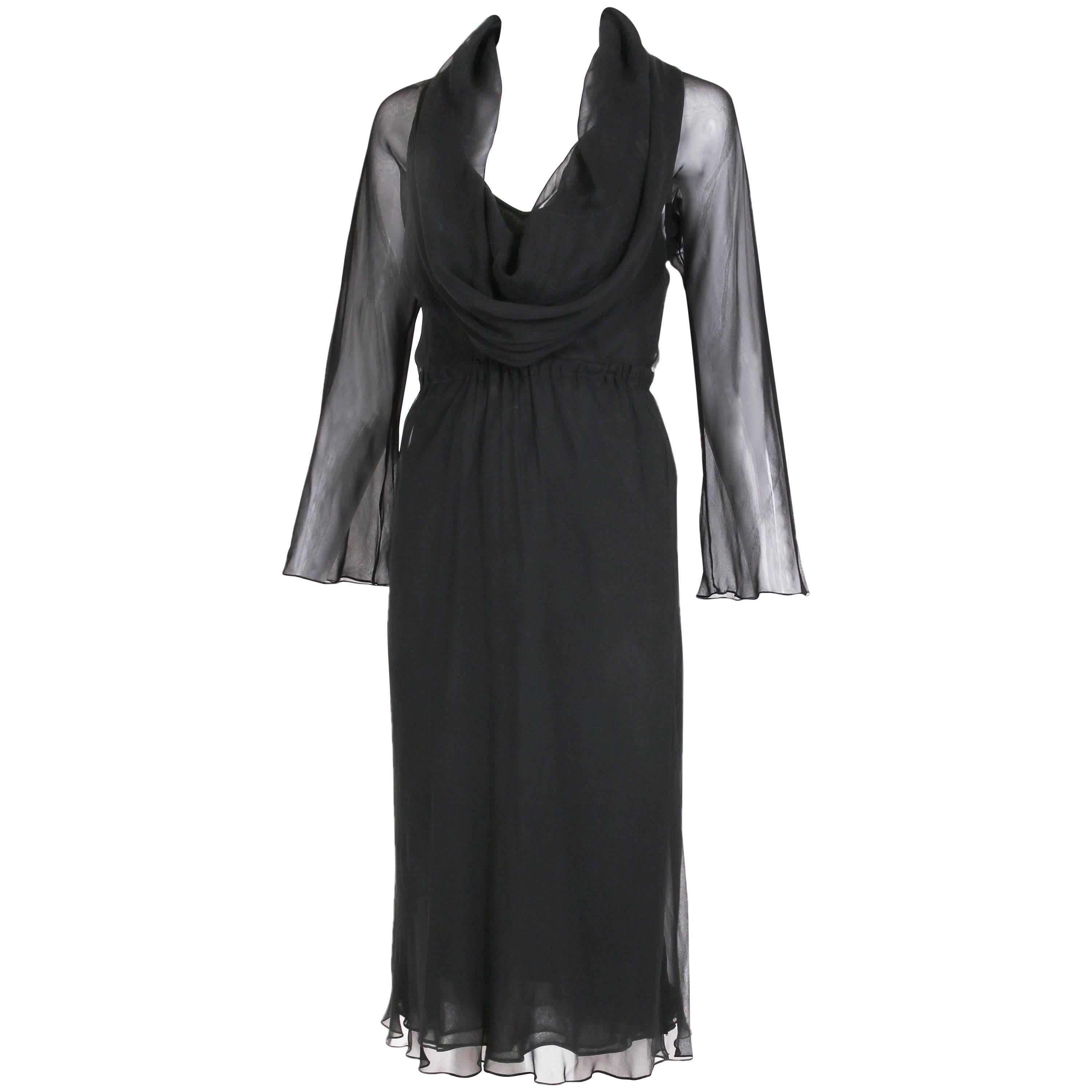 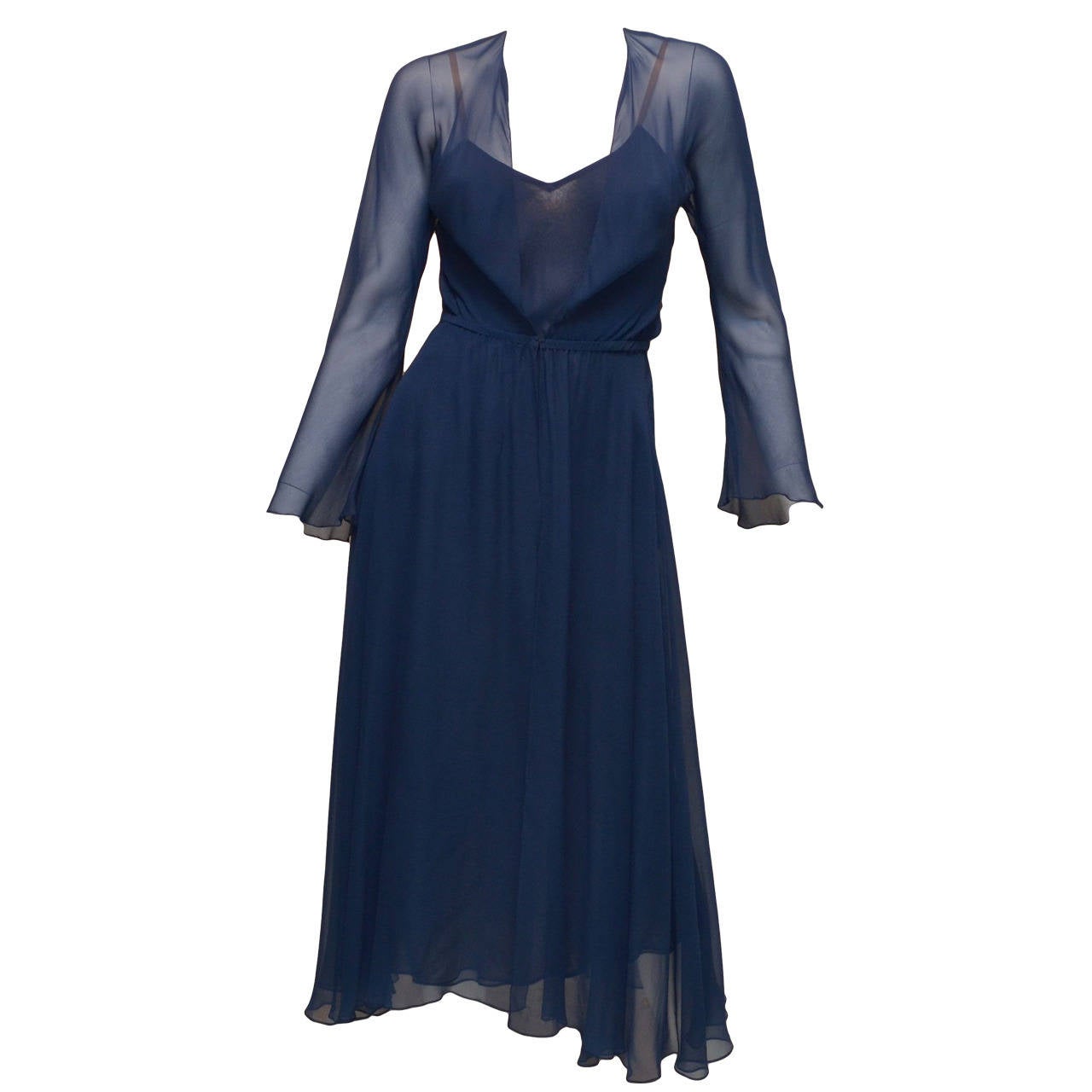 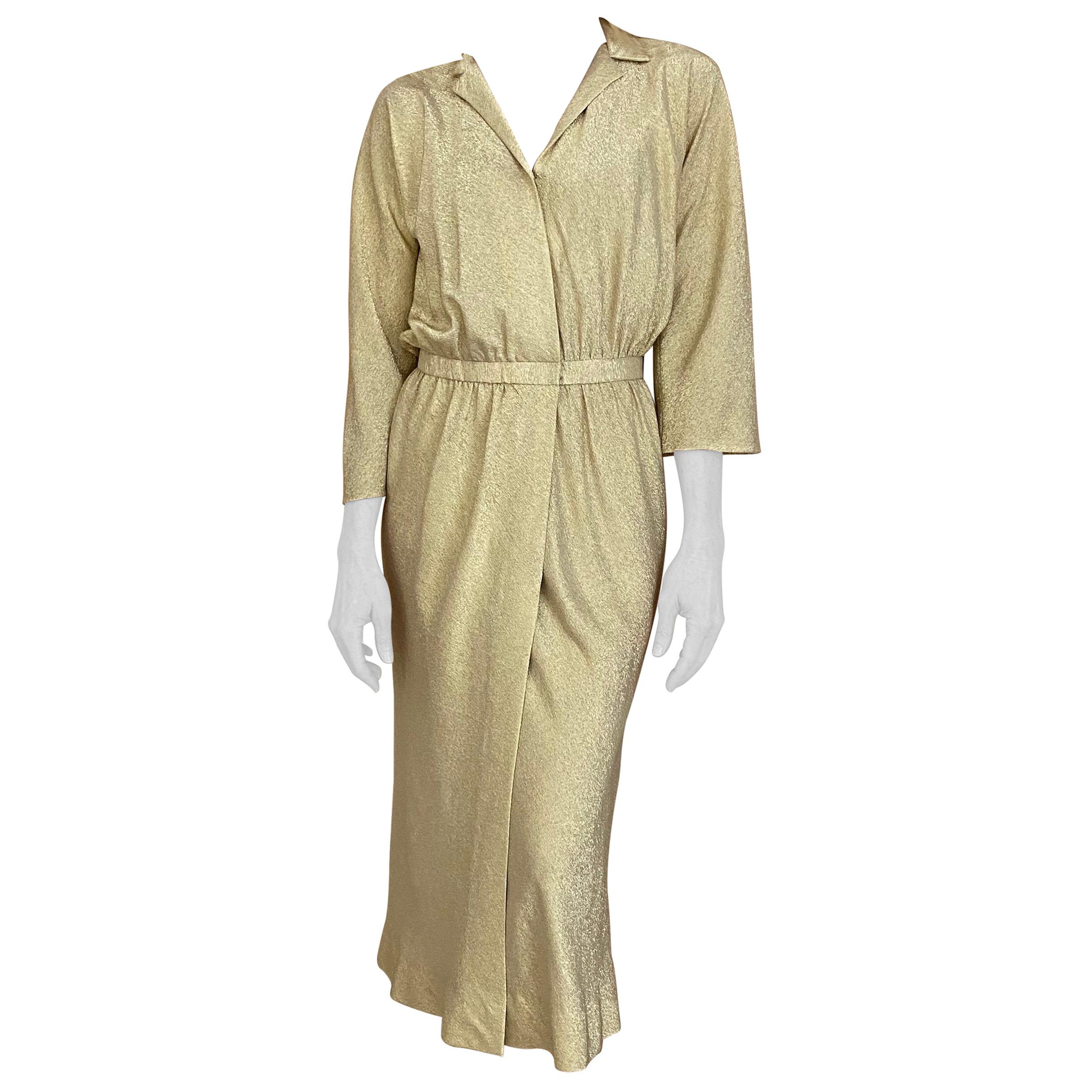 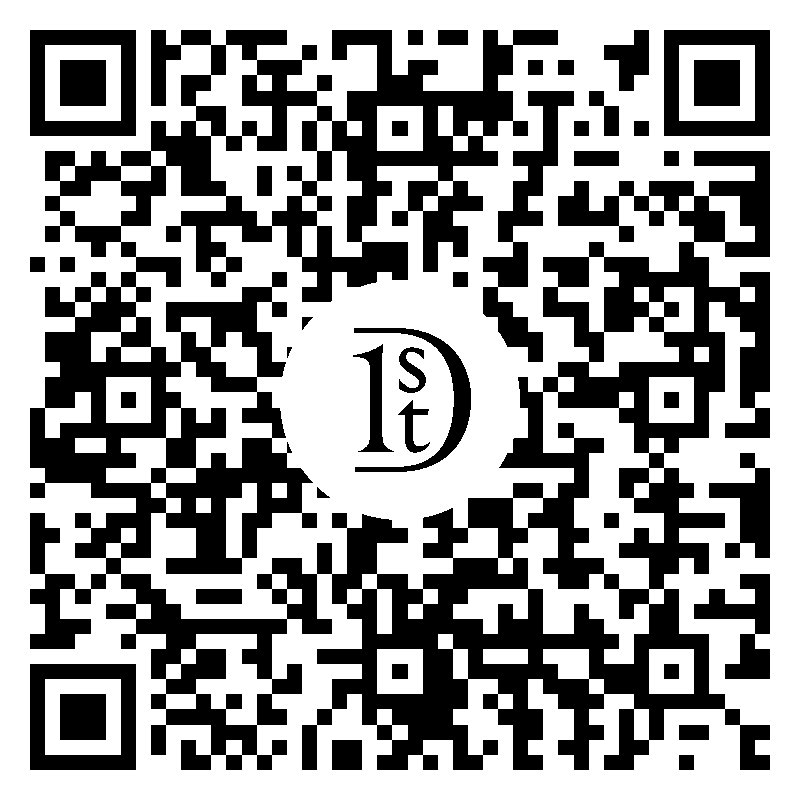 Rare Halston Gown
This dress has a plunging neck line and is designed in true grecian style.
It has a very subtle pleating detail and is in prefect condition.
Here is a chance to own a piece by one of the great American designers. 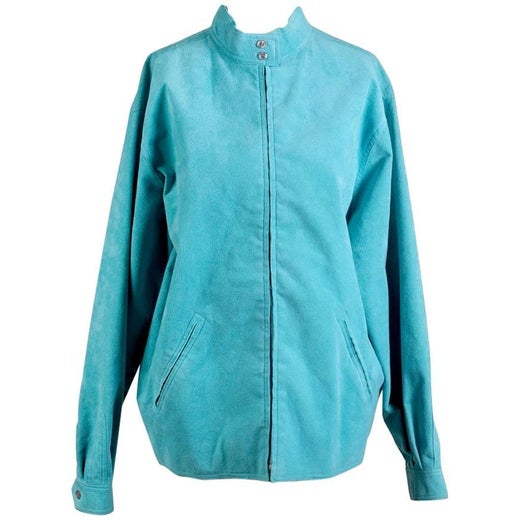 Recognized for the understated but wholly glamorous fashions he introduced in the 1970s, and revered today for his vintage dresses, sunglasses, handbags and other enduring designs, Roy Halston Frowick defined the spare, body-conscious style of the so-called Studio 54 era. In doing so, he became a legend himself, known simply as Halston, a lean moniker that represented the visionary minimalist ideals he would inject into the world of fashion.Born in Des Moines, Iowa — but raised in Evansville, Indiana — Halston moved to Chicago in 1952, where he worked as a window dresser by day and studied at the School of the Art Institute of Chicago at night. In the late 1950s, he moved to New York City. As the hat designer for Bergdorf Goodman, he had his first encounter with fame in 1961 when Jackie Kennedy wore a pillbox hat he designed to President John F. Kennedy’s inauguration. Less than a decade later, after hats fell out of fashion and sales plummeted, Halston launched his own ready-to-wear line and opened a ​​Madison Avenue boutique.One of Halston’s early successes was the sexy Ultrasuede shirtdress, an unassuming adaptation of a man’s oxford shirt introduced in 1972 that became a fashion staple for the well-dressed woman. Named for a washable synthetic fabric that evokes the feel of suede — Halston is said to have previously seen innovative designer Issey Miyake wearing the material — the Ultrasuede shirtdress was cut to complement many figures with buttons that began at the breastbone rather than at the garment’s structured neckline. In one season, 60,000 were sold. Ultrasuede became a Halston signature, and he would use the fabric in coats, luggage and other items.But it was his seductively simple nightlife designs that made Halston an international name. Often cut on the bias or sewn with single seams, his garments were constructed to flatter the female form like no evening gowns that had come before, popularizing such styles as the halter dress. “Halston brought a spark of the divine to everything he did,” said model Pat Cleveland during an interview about the 2021 Netflix series based on his life.And, for a while, the designer was as ubiquitous in the clubs as his designs. “For two decades, [Halston] was the king of New York nightlife,” wrote Steven Gaines in Vanity Fair. He was a regular at Studio 54, partying with the likes of Andy Warhol, Bianca Jagger, Liza Minnelli and his Halstonettes, his coterie of glamorous models and muses that included Elsa Peretti. The close friend and collaborator of Halston’s transformed diamond jewelry for Tiffany & Co. after signing a contract with the storied American luxury house in 1974.Halston won four Coty American Fashion Critics' Awards over the course of his career. In 1973, he sold his company to Norton Simon, and in the early 1980s, it switched ownership again. By 1984, neither his name nor his company were his own. Halston continued to work, however. He collaborated with close friend and legendary choreographer Martha Graham, designing critically acclaimed costumes for her, including for her dance work Persephone in 1987. Halston died of complications from AIDS in 1990.Today, Halston’s designs can be found in the Metropolitan Museum of Art, the Philadelphia Museum of Art, the Museum of Fine Arts, Houston and more.Find vintage Halston clothing and fashion accessories today on 1stDibs. 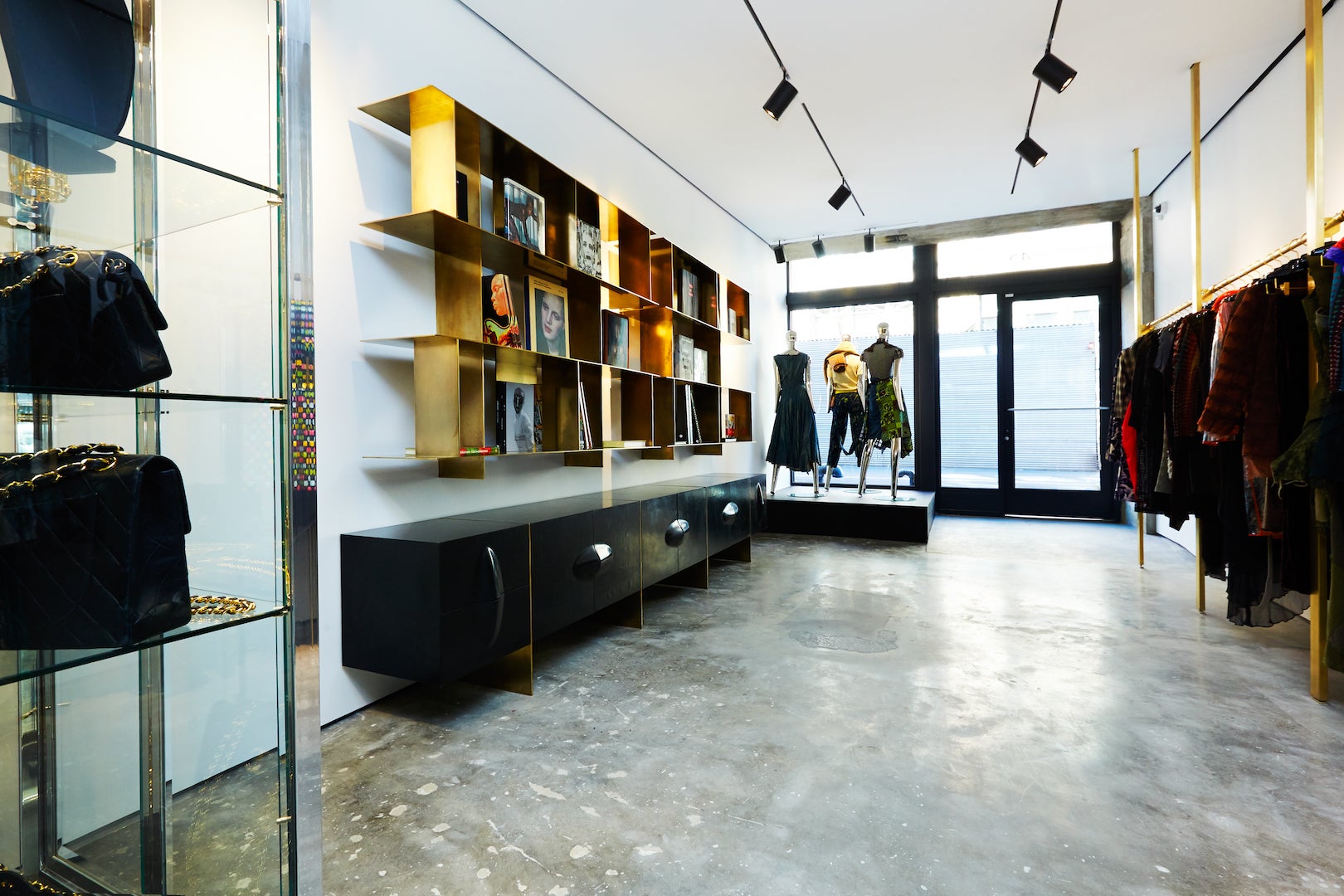 About the Seller
4.5 / 5
Located in Los Angeles, CA
Recognized Seller
These prestigious sellers are industry leaders and represent the highest echelon for item quality and design.
Established in 1996
1stDibs seller since 2009
337 sales on 1stDibs
Typical response time: 9 hours

$1,800
HALSTON Black Stretch Silk One Shoulder Dress Size 38
By Halston
Located in Los Angeles, CA
This Halston dress is composed of a black stretch silk and features a one shoulder design with gathers. Pull over style. In excellent condition. **Please cross-reference measu...
Category