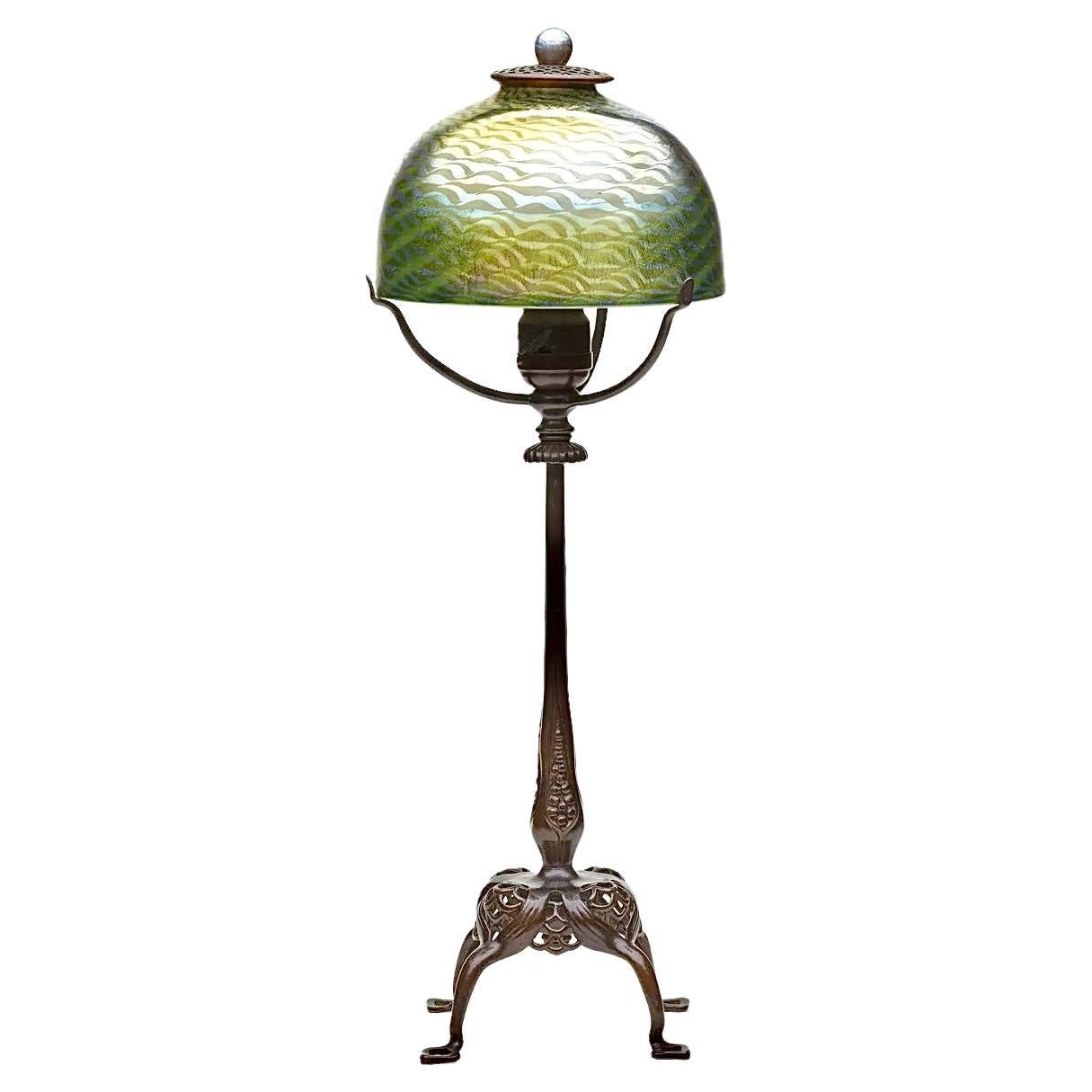 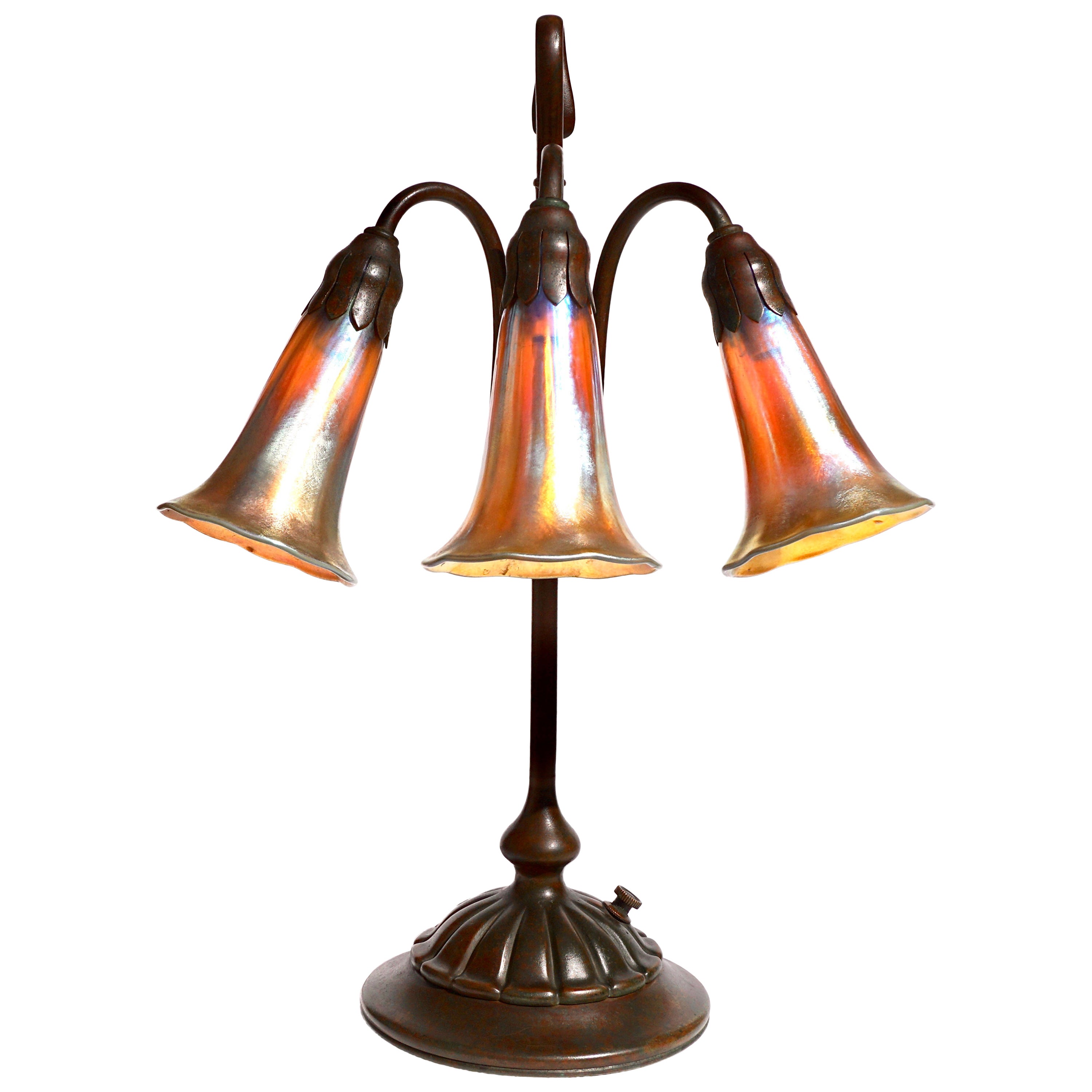 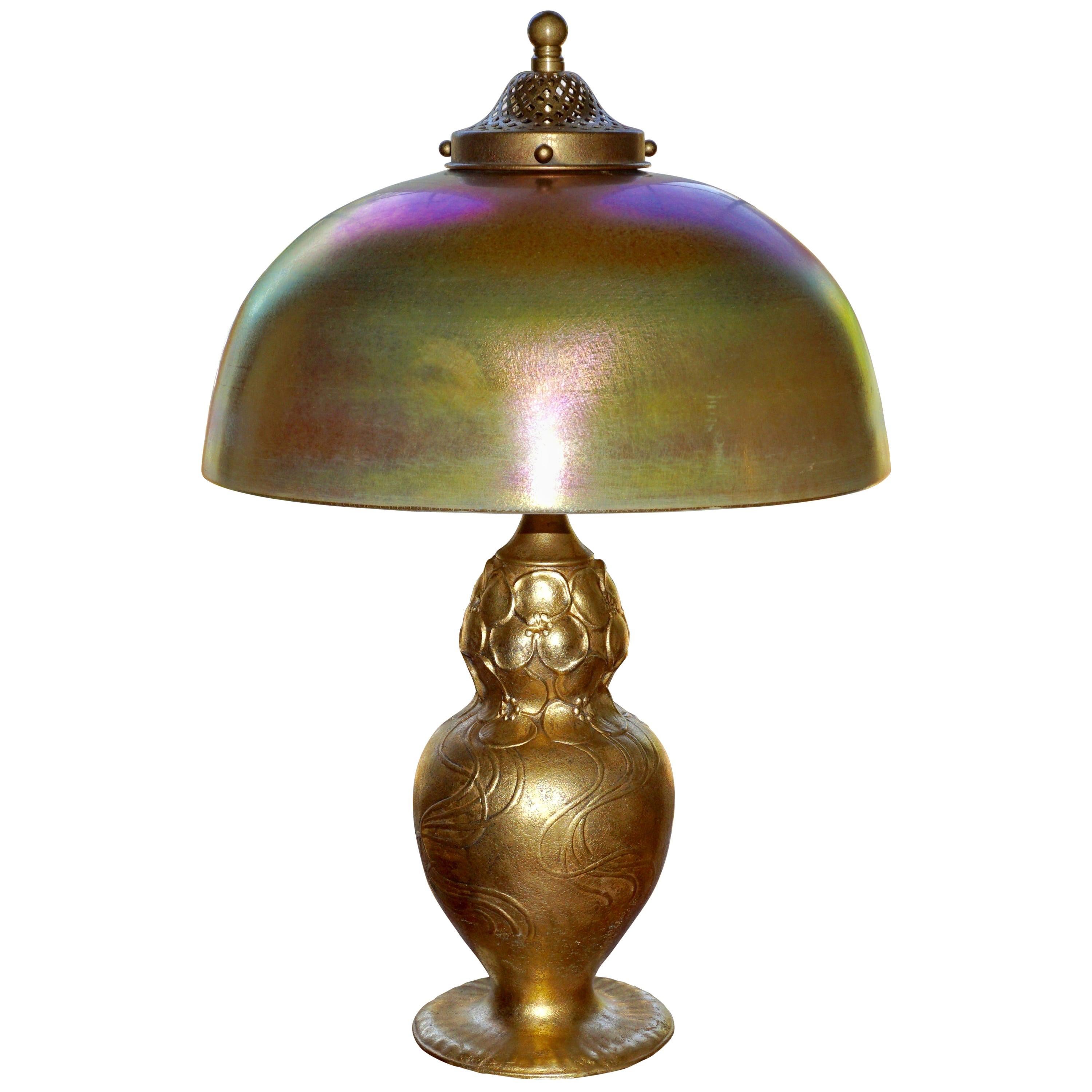 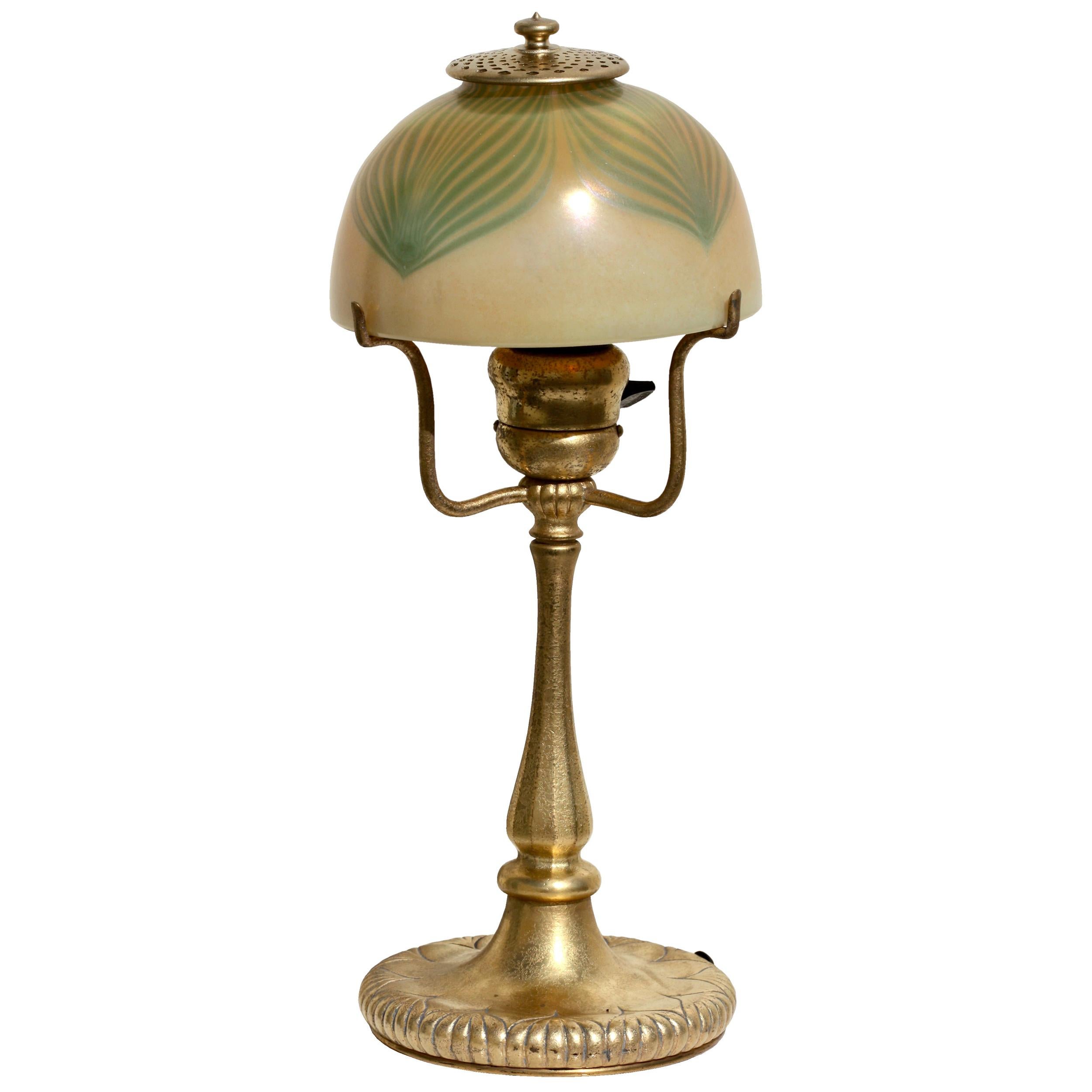 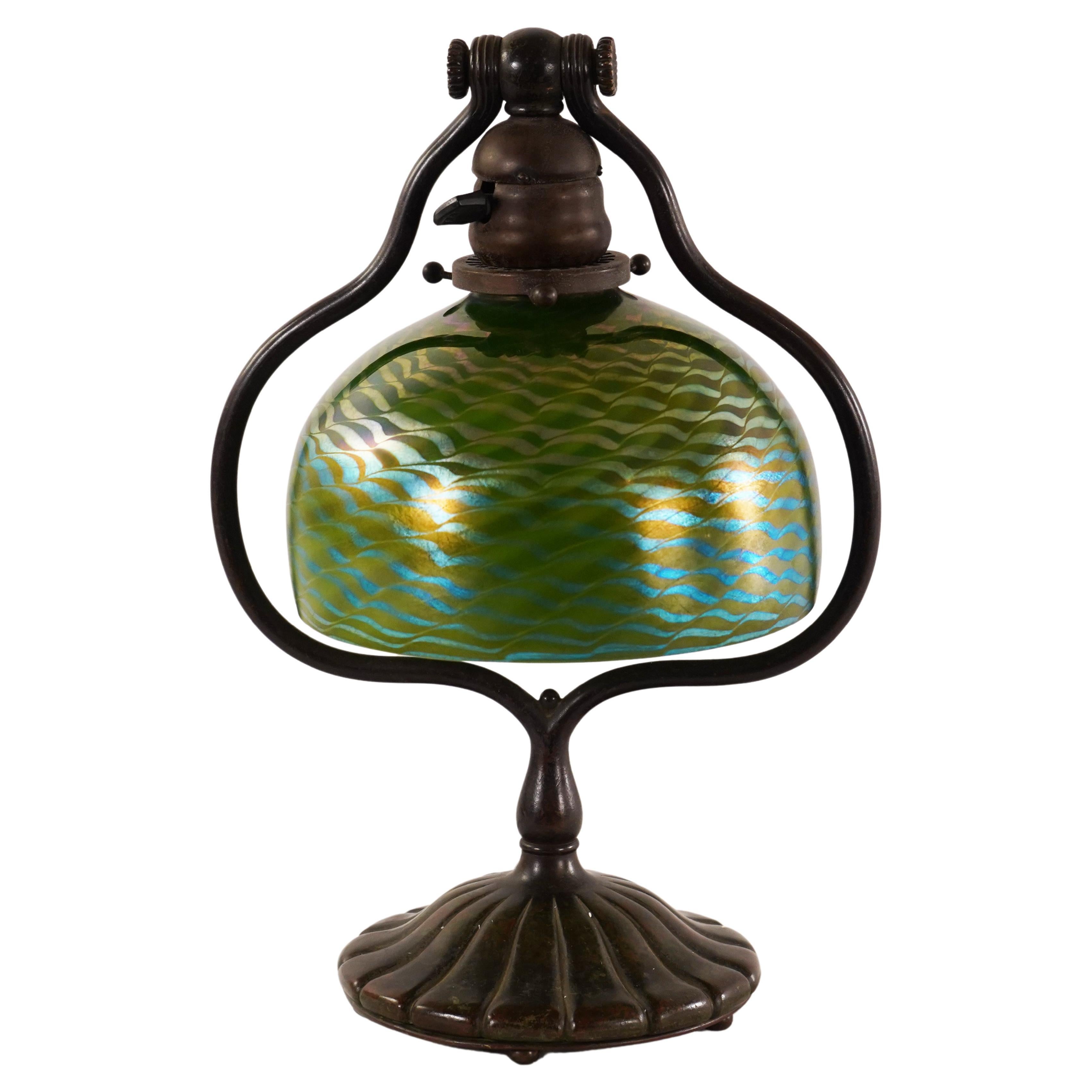 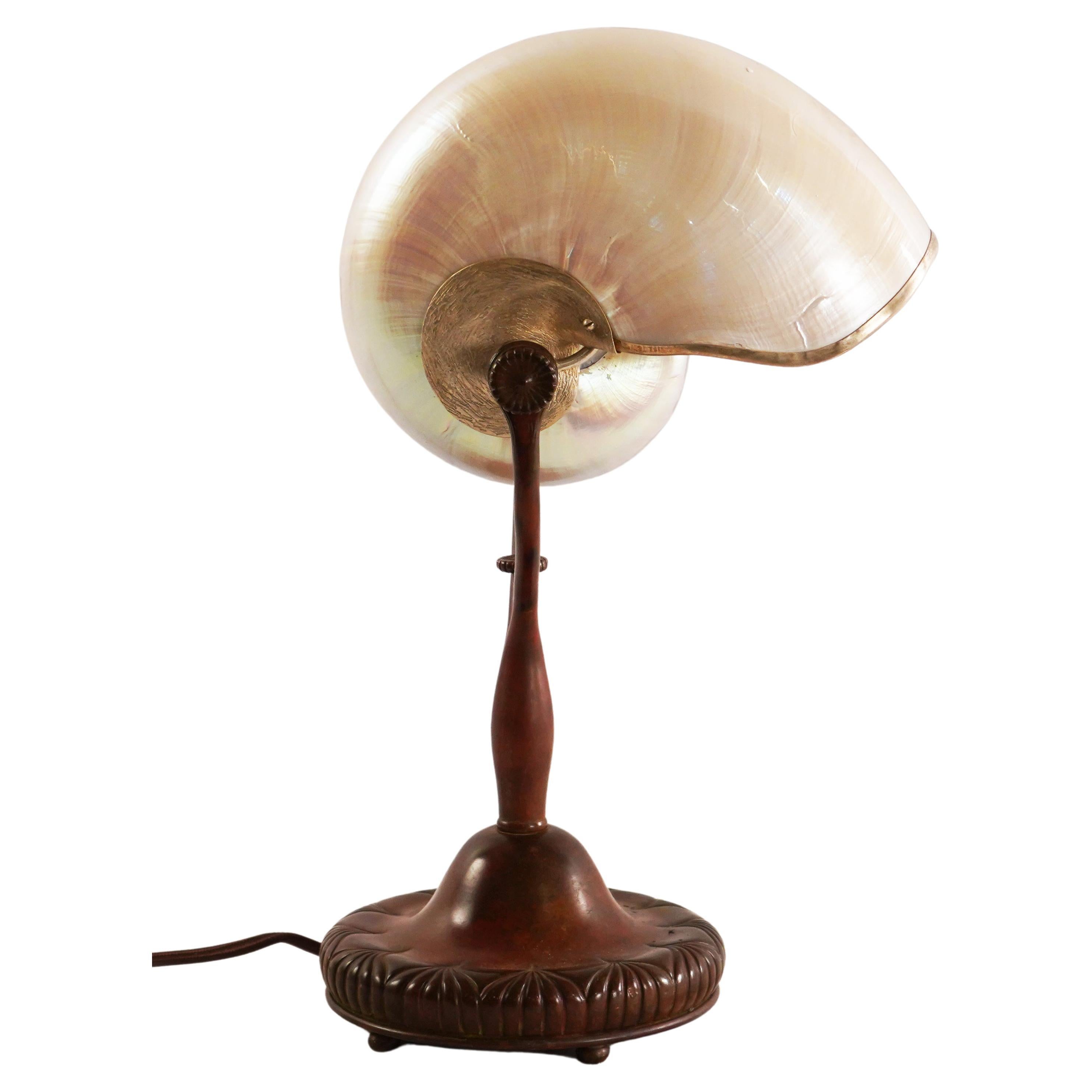 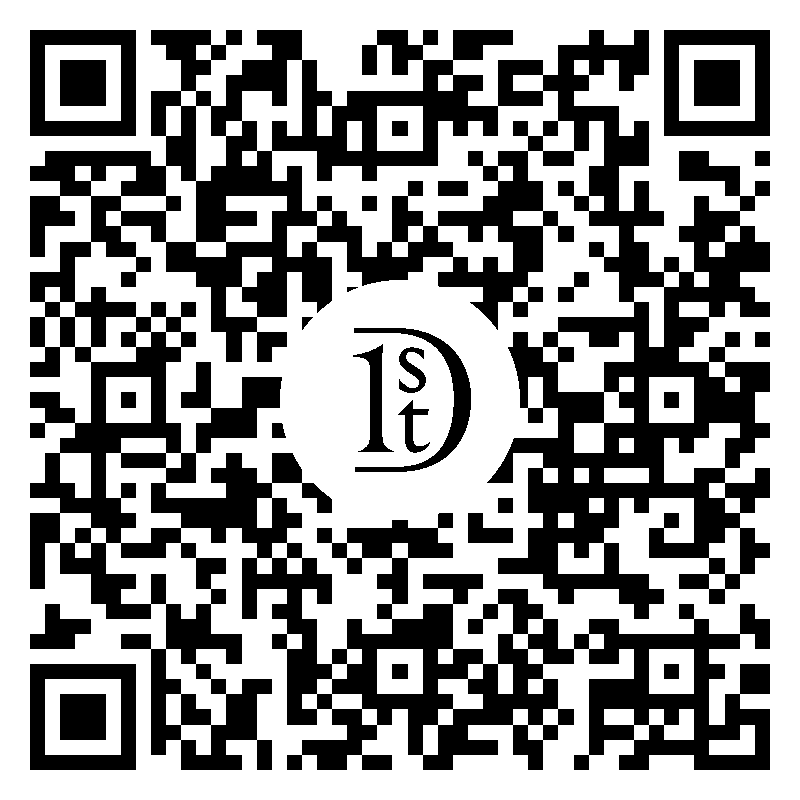 Tiffany Studios New York; Louis Comfort Tiffany Favrille. Circa 1902-1919; New York, NY Shade signed: L.C.T. Favrile Base signed: Tiffany Studios / New York / 637 The gold iridescent Favrile glass floriform shade on a patinated bronze gooseneck base with adjustable head, curving stem, and circular foot with leaf motif. All original and complete. Art Nouveau - Art Deco era. Measures: Height: 12 X 12 X 6.5 Inches Condition: Excellent with no an damage or repairs. Some Rubbing to patina and flea bites to fitter rim. Provenance: The Alan Schneider Collection Literature: Alastair Duncan, "Tiffany Lamps and Metalware," 2007, p. 116, fig. 488. AVANTIQUES is dedicated to providing an exclusive curated collection of Fine Arts, Paintings, Bronzes, Asian treasures, Art Glass and Antiques. Our inventory represents time-tested investment quality items with everlasting decorative beauty. We look forward to your business and appreciate any reasonable offers. All of our curated items are vetted and guaranteed authentic and as described. Avantiques only deals in original antiques and never reproductions. We stand behind our treasures with a full money back return if the items are not as described. Tiffany Studios Although Louis Comfort Tiffany’s company is best known by the name of Tiffany Studios, his vast creative enterprise operated under various names through the years. These include Louis C. Tiffany & Company (1878–85); Tiffany Glass Company (1885–92); Tiffany Glass and Decorating Company (1892–1900); Allied Arts (1900–1902); and Tiffany Studios (1902–32). Additional production support was provided by Stourbridge Glass Company (1893–1902); Tiffany Furnaces, Inc. (1902–20); and Louis C. Tiffany Furnaces, Inc. (1920–28). These too were Tiffany companies. Tiffany was the president and art director, the primary figure driving all production— artistically and technically. Tiffany, of course, was the son of Charles Lewis Tiffany (1812–1902), founder of the successful and influential jewelry firm, Tiffany & Co. Louis Tiffany advanced his reputation by his own name and his father’s. Tiffany once reportedly stated: “Go after the money there is in art, but the art will be there just the same.” These words are the sentiment of an artist who created a marketing machine, but who in the end allowed the artistic side to rule. Louis Tiffany’s financial backers, mainly his father, were called upon time and again to keep his companies solvent. His familial ties facilitated prominence at international expositions—a decided advantage for a young artist with big ambitions. His firms always exhibited aside Tiffany & Co. Louis Tiffany, therefore, was able to enhance the marketability of his own wares by capitalizing on the Tiffany name established by his father. Louis Tiffany’s studio system was not a simple enterprise; he needed specialized workers to accomplish his goals. Under Tiffany’s watch, teams of talented designers and craftspeople translated his all-encompassing vision into the beautiful objects—blown-glass vases, leaded-glass windows and lamps, pottery, jewelry, and more—that captivated an era. He publicly credited a number of these individuals for their work. In the Synopsis of the Exhibit of the Tiffany Glass and Decorating Company from the World’s Columbian Exposition in 1893, for example—published by Tiffany Glass and Decorating Company and freely distributed—Will H. Low (1853–1932) and Lydia Emmet (1866–1952) are cited beneath pictures of their designs. Other important designers at Tiffany’s company included Frederick Wilson (1858–1932), Joseph Lauber (1855–1948), Edward P. Sperry (d. 1925), Agnes Fairchild Northrop (1857–1953), Alice Carmen Gouvy (1863–1924), and Clara Driscoll (1861–1944). Neither Tiffany Studios nor the Tiffany companies preceding it were created to function as guilds where individual artists are equally recognized. They were designed in the historic tradition of studios that produced works under the name of an established artist. Providing a portrait of Tiffany’s career, including his companies, is complicated. Scholars rely on surviving business records and personal accounts of individual employees to glean facts and insights. The discovery in the early 2000s of a trove of letters written by Clara Driscoll, a talented designer who supervised the Women’s Glass Cutting Department for Tiffany, has provided invaluable new information about aspects of production at Tiffany Studios. Still, one employee cannot tell the whole story. Tiffany created his studios under a specific design theory—one based on his own ideals but under which he encouraged designers to interpret creatively. In addition to his supervision, evidenced in signatures on designs and personal accounts of his visits out to the glasshouse in Corona, New York, he maintained a design file to provide inspiration for the designers. The files included photographs of works created early in his career, of historic monuments of personal interest to Tiffany, and of sights and objects from his travels. With these measures in place, Tiffany secured the unity and quality of overall production of his companies. Please also consider Avantiques eclectic Art Glass and Pate De Verre collection including Emile Galle, Daum Nancy, Schneider, Argy Rousseau, Almeric Walter, D’Argental, St Louis, Decorchemont, and Louis Comfort Tiffany Studios. We strive to collect the highest quality glass pieces in exceptional condition. 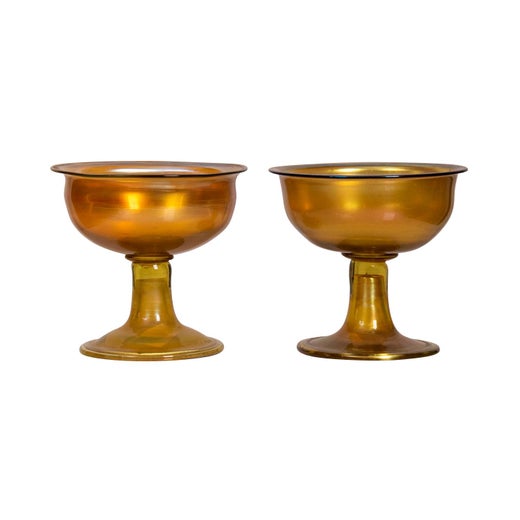 The hand-crafted kerosene and early electric lighting fixtures created at Tiffany Studios now rank among the most coveted decorative objects in the world. Tiffany designs of any kind are emblematic of taste and craftsmanship, and Tiffany glass refers to far more than stained-glass windows and decorative glass objects. The iconic multimedia manufactory’s offerings include stained-glass floor lamps, chandeliers and enameled metal vases. The most recognizable and prized of its works are antique Tiffany Studios table lamps.

The name Tiffany generally prompts thoughts of two things: splendid gifts in robin’s-egg blue boxes and exquisite stained glass. In 1837, Charles Lewis Tiffany founded the former — Tiffany & Co., one of America’s most prominent purveyors of luxury goods — while his son, Louis Comfort Tiffany, is responsible for exemplars of the latter.

Louis was undoubtedly the most influential and accomplished American decorative artist in the decades that spanned the late 19th and early 20th centuries. Rather than join the family business, he studied painting with several teachers, notably the scenic painter Samuel Colman, while spending long periods touring Europe and North Africa. Though he painted his entire career, visits to continental churches sparked a passionate interest in stained glass. Tiffany began experimenting with the material and in 1875 opened a glass factory-cum-laboratory in Corona, Queens — the core of what eventually became Tiffany Studios.

In his glass designs, Tiffany embraced the emerging Art Nouveau movement and its sinuous, naturalistic forms and motifs. By 1902, along with glass, Tiffany was designing stained-glass lamps and chandeliers as well as enameled metal vases, boxes and bowls, and items such as desk sets and candlesticks. Today such pieces epitomize the rich aesthetics of their era.

The lion’s share of credit for Tiffany Studios table lamps and other fixtures has gone to Louis. However, it was actually Clara Driscoll (1861–1944), an Ohio native and head of the Women’s Glass Cutting Department for 17 years, who was the genius behind the Tiffany lamps that are most avidly sought by today’s collectors. A permanent gallery of Tiffany lamps at the New-York Historical Society celebrates the anonymous women behind the desirable fixtures. 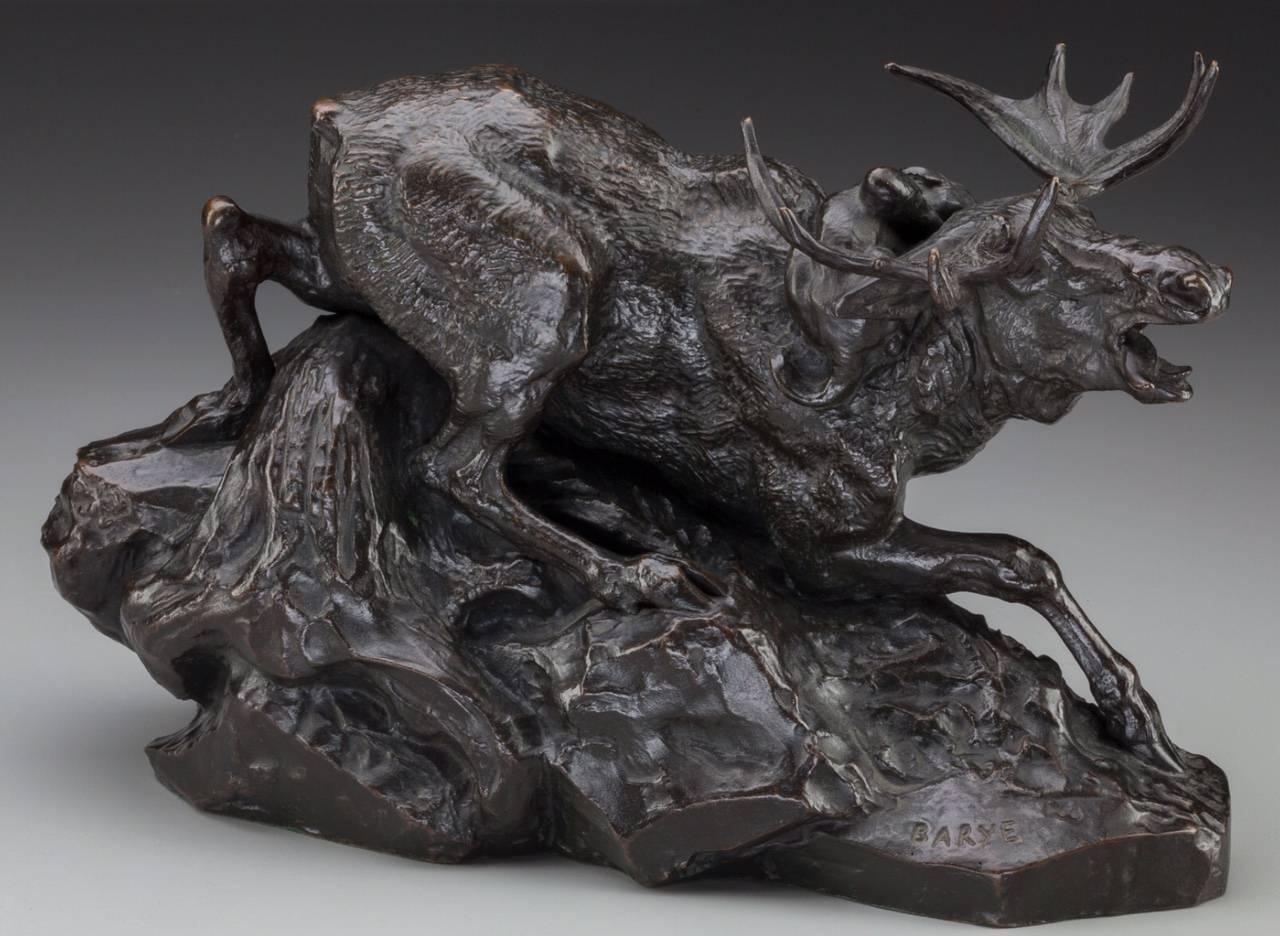 About the Seller
4.9
Located in Dallas, TX
Vetted Seller
These experienced sellers undergo a comprehensive evaluation by our team of in-house experts.
Established in 2000
1stDibs seller since 2015
343 sales on 1stDibs
Typical response time: 2 hours
More From This SellerView All
You May Also Like