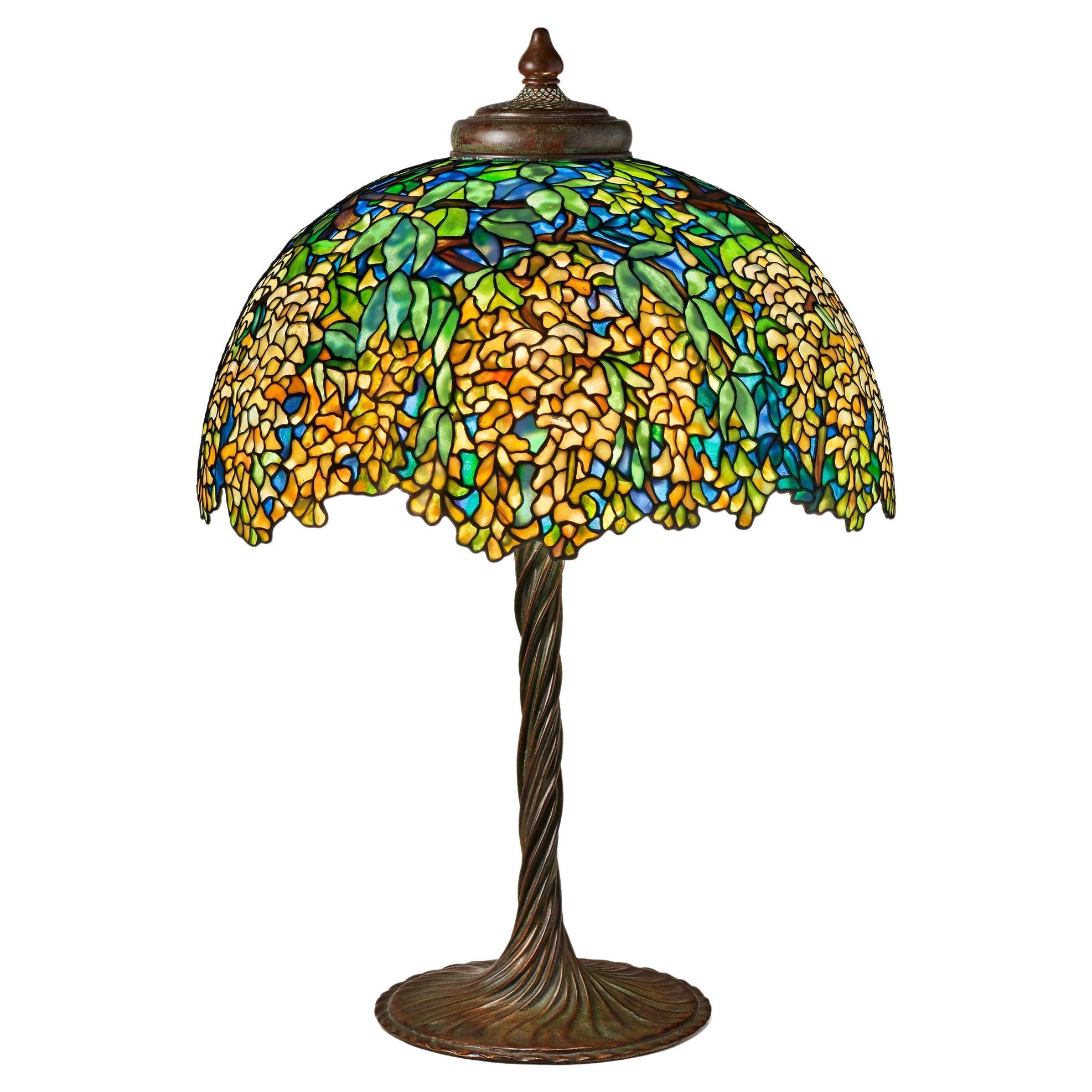 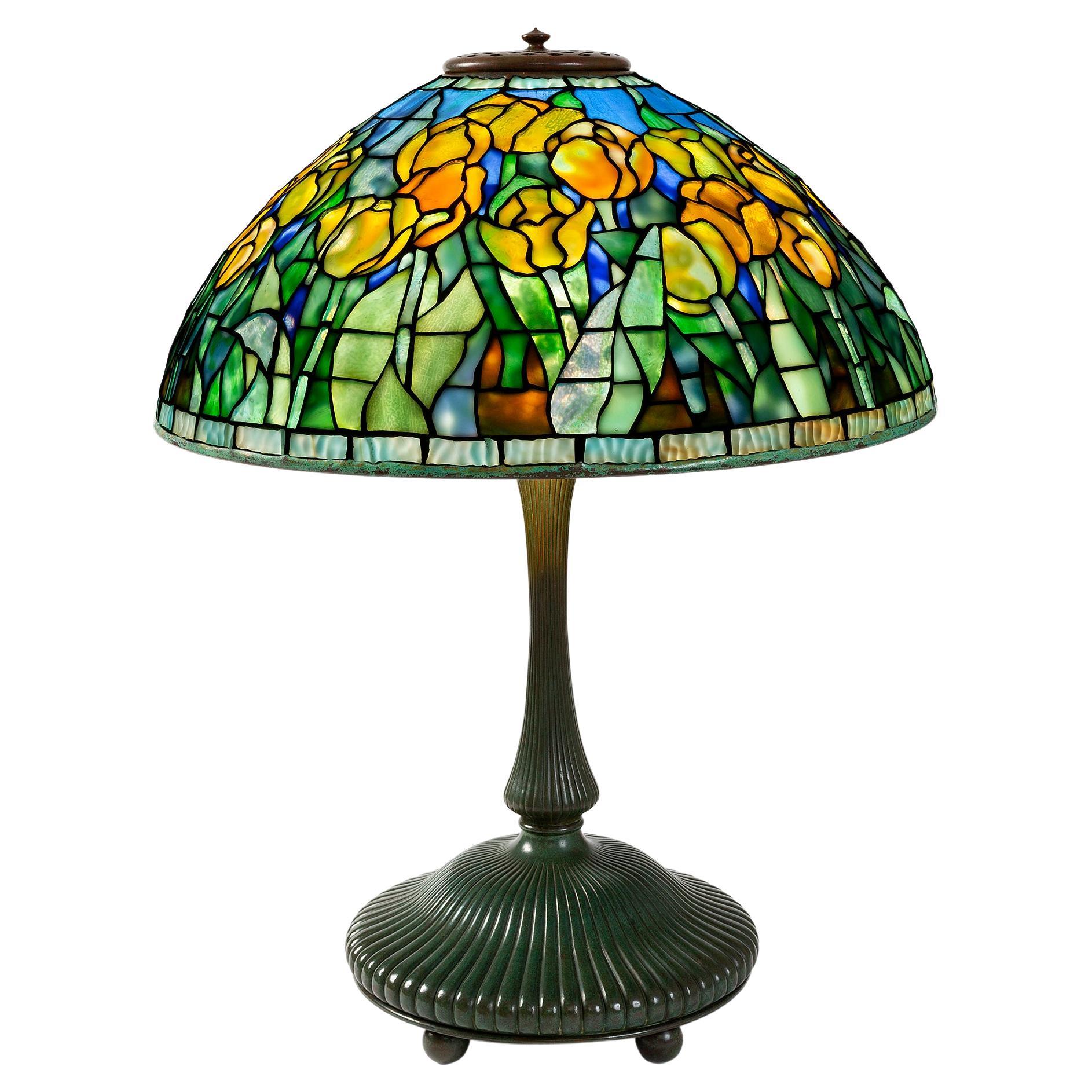 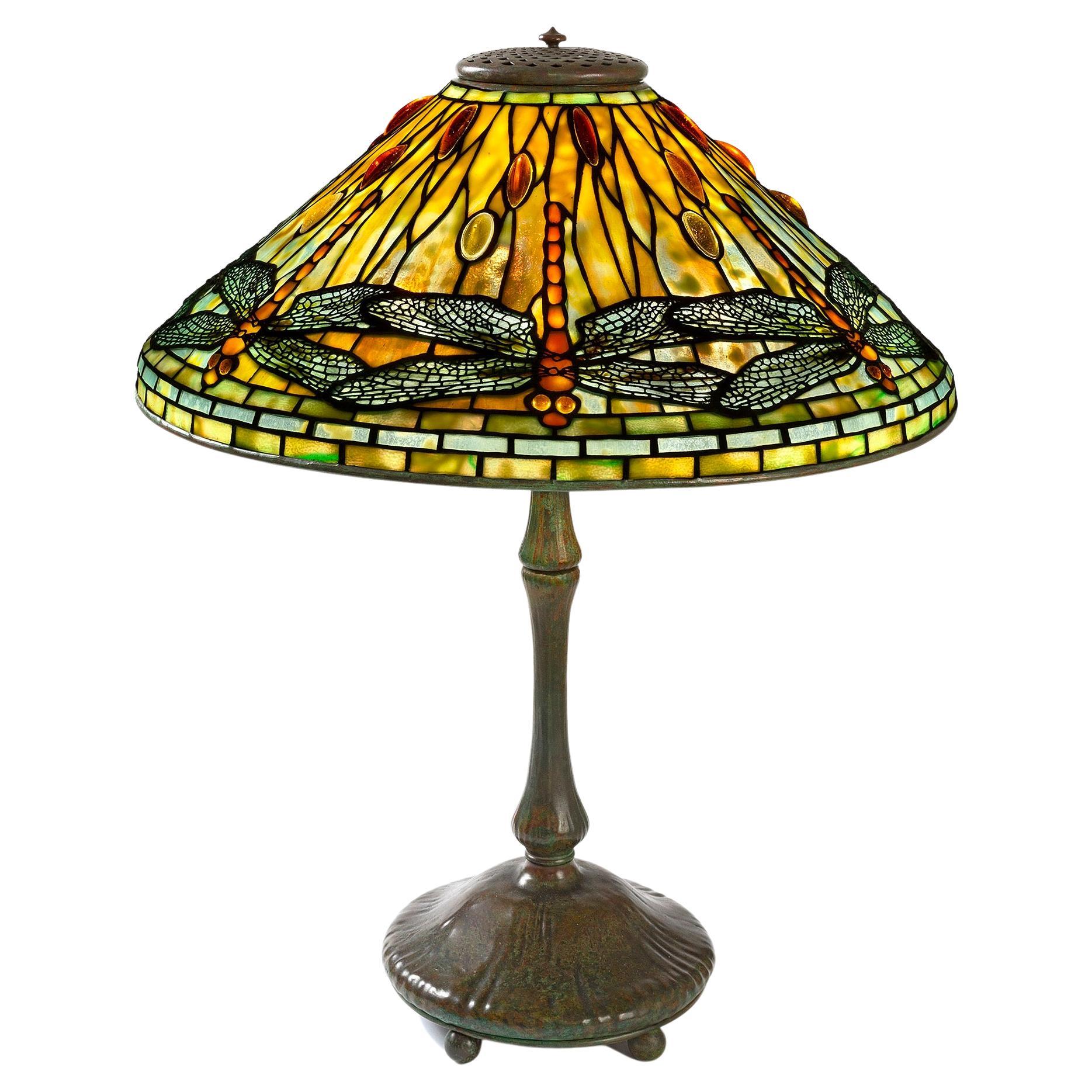 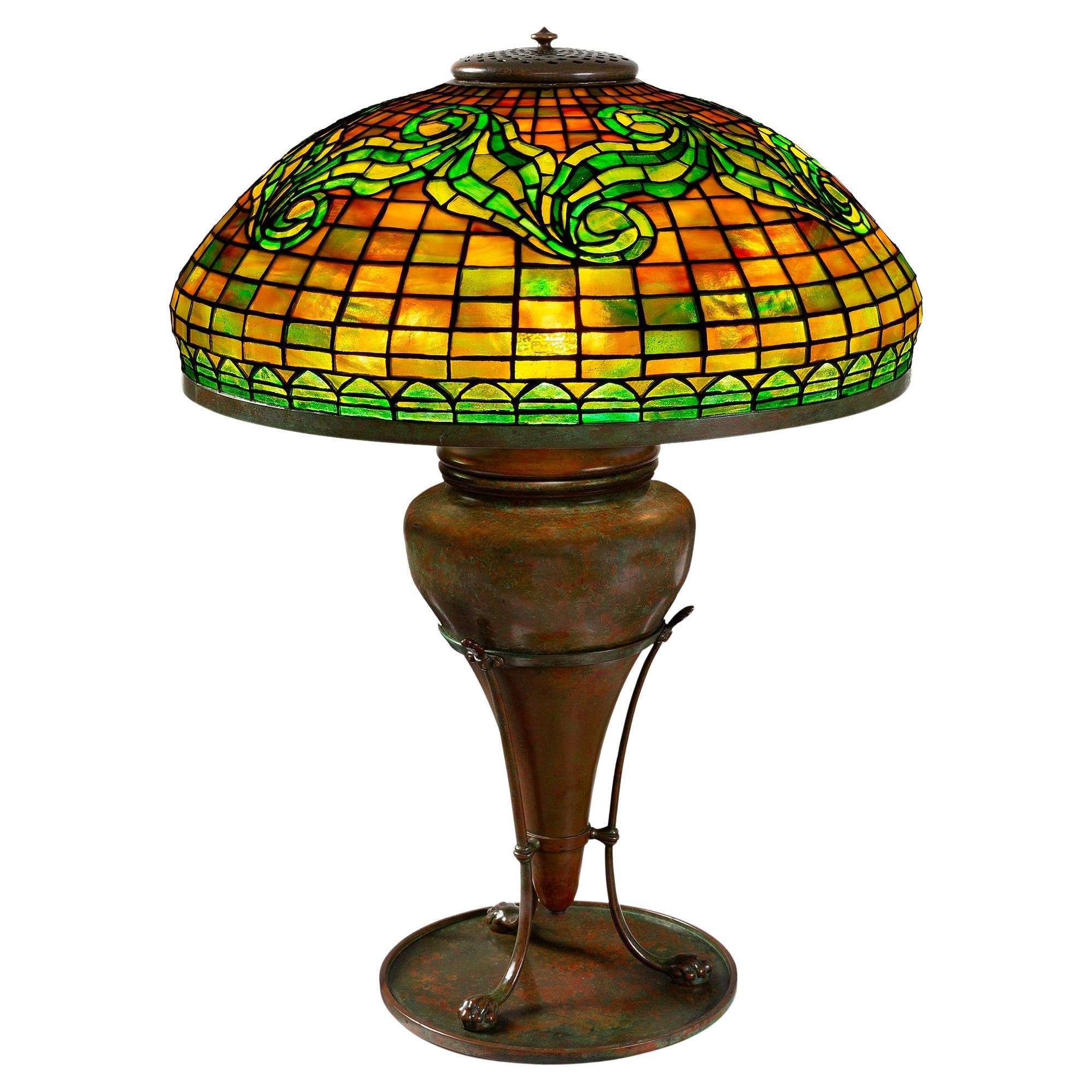 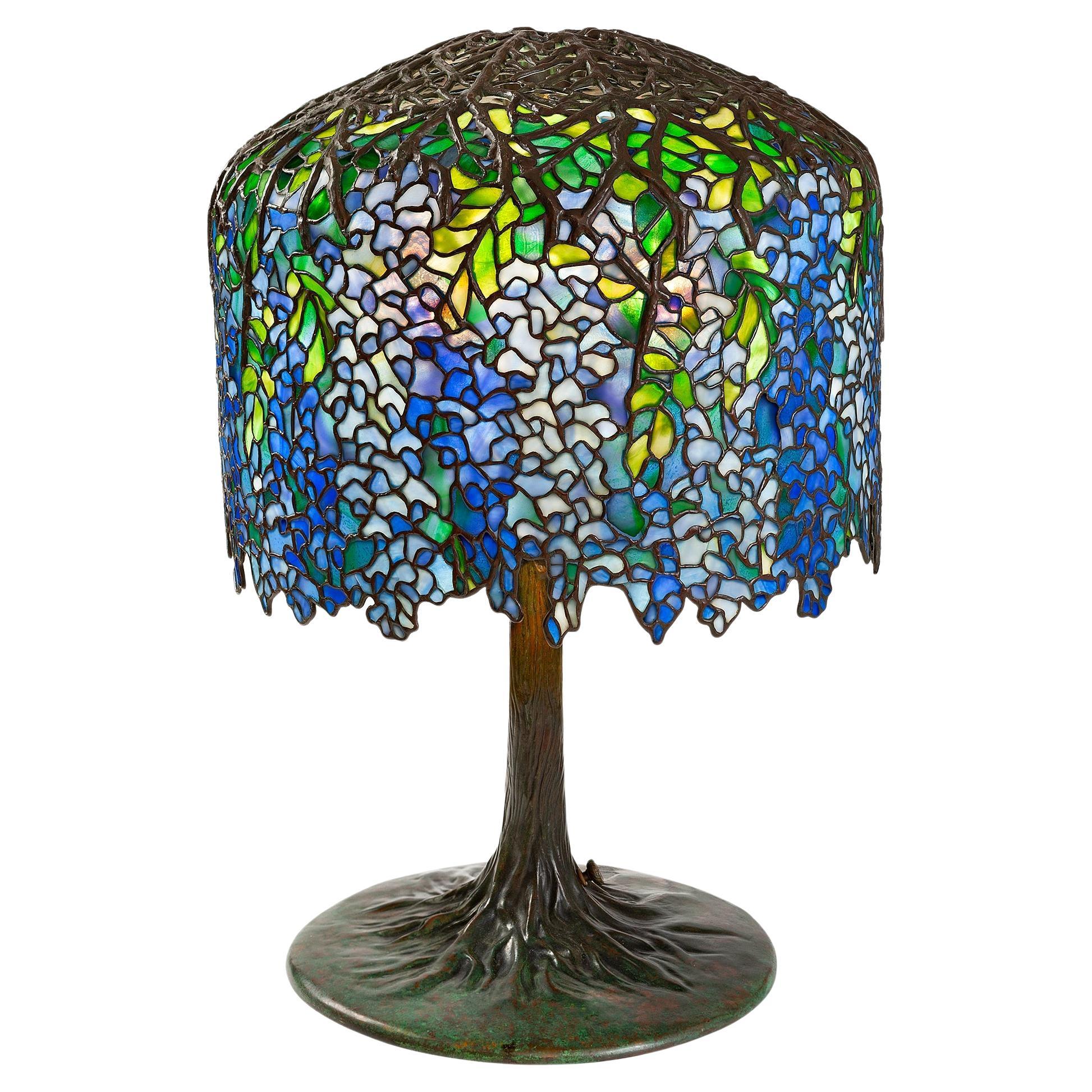 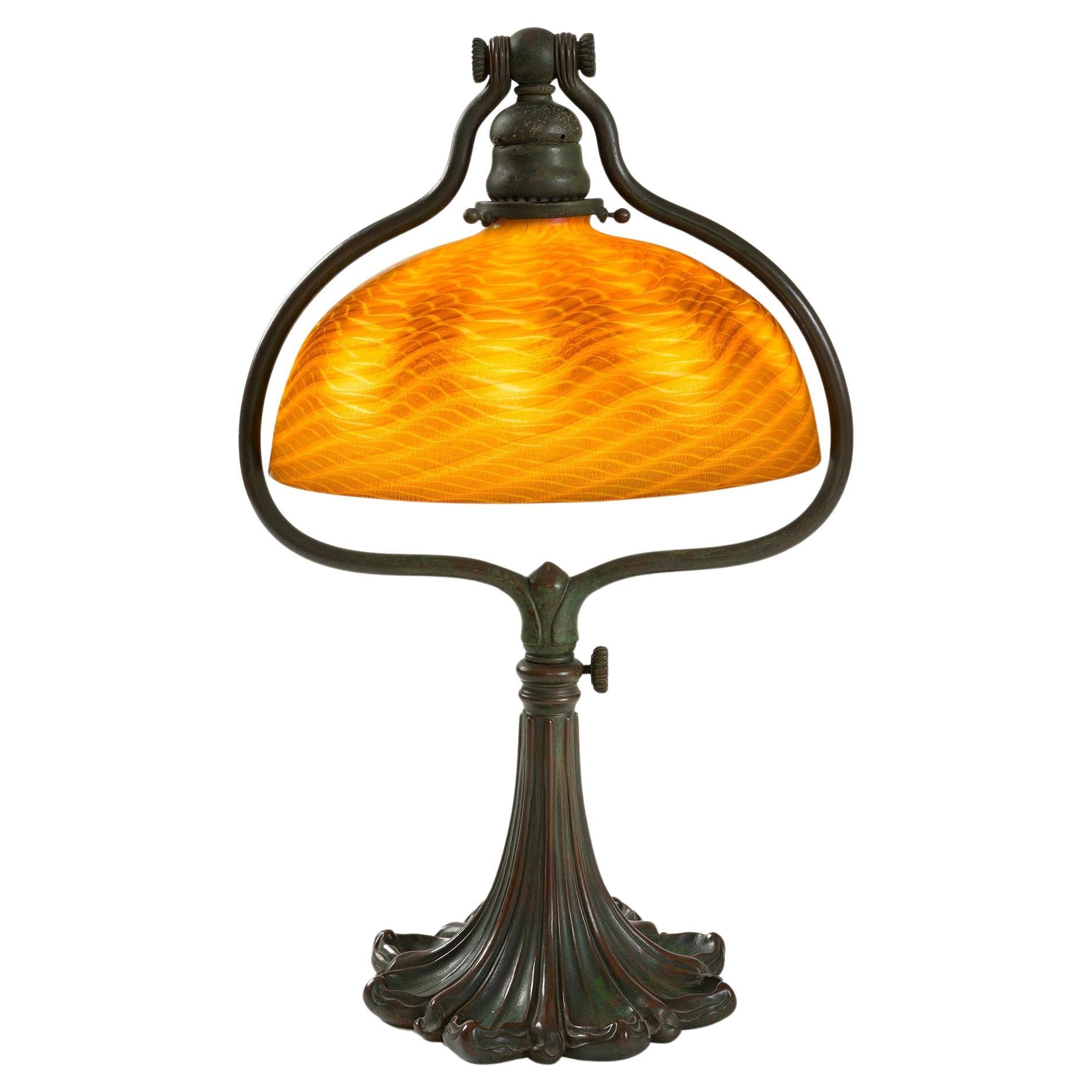 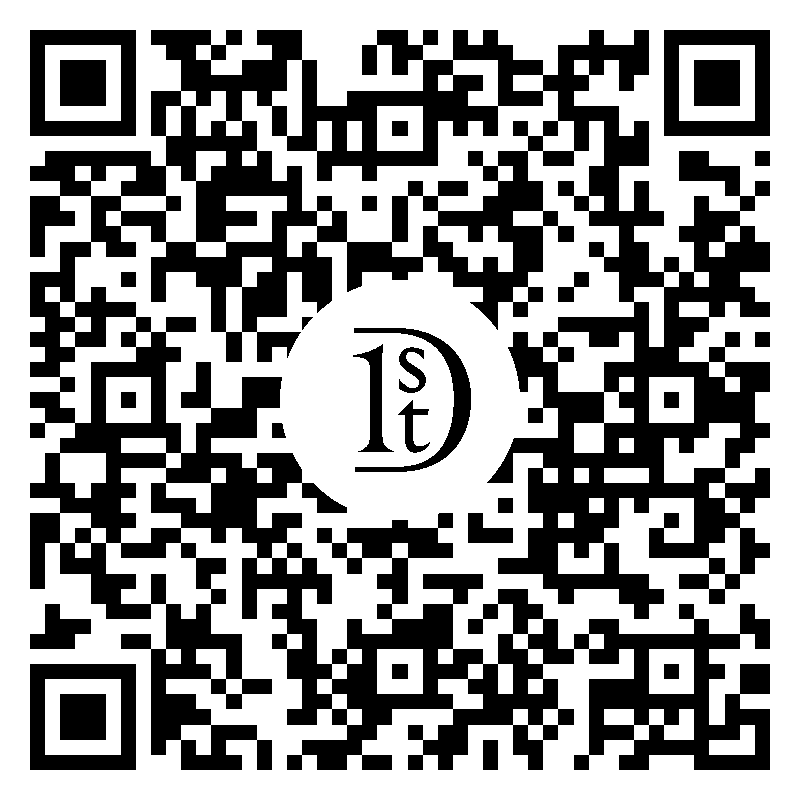 A Tiffany Studios New York "Ten-Light Lily" table lamp. Alight with golden glow, this remarkable example of Tiffany's beloved Lily lamps offers an exciting bouquet of downward facing and brilliantly iridescent Favrile glass shades in the form of trumpeted morning glories on a gilt lily pad base. The playful use line in the arrangement of the flower's stems delights the eye as a delicate but densely layered grouping of lily pads anchors the composition. Remarkably, each of the 10 shades decorating the gilt stems of this Lily lamp are sequentially numbered, making it an exceptional and exciting collectible for devotees of Tiffany Studios. Product Details Item #: L-20708 Artist: Tiffany Studios New York Circa: 1900 Country: United States Dimensions: 14" diameter, 20.5" height Materials: Gilt Bronze, Favrile Glass Shades Signed: L.C.T. Favrile Base Signed: Tiffany Studios New York 381 Literature: Tiffany Lamps and Metalware: An illustrated reference to over 2000 models, by Alastair Duncan, Woodbridge: Suffolk: Antique Collectors' Club, 1988, p. 80, plates 310 and 312. Macklowe Gallery Curator's Notes Identical and perfectly sequential signatures on all 10 Lily shades is an incredible and incredibly rare instance for a lamp with a collection of Favrile shades, in 50+ years of business we have simply never seen this before and are excited to present this remarkable discovery with our dedicated collectors. 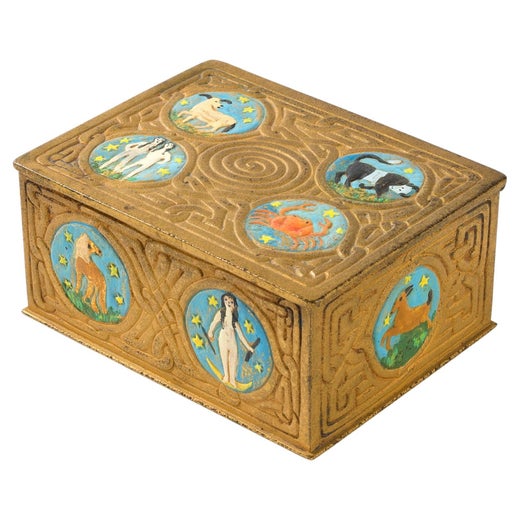 By the time Tiffany was born, the stationery and “fancy goods” emporium his father had established 11 years before had grown to become the most fashionable jewelry and luxury items store in New York. Tiffany fils declined to join the family business and pursued a career as an artist. He studied painting with several teachers, notably the scenic painter Samuel Colman, while spending long periods touring Europe and North Africa. Though he painted his entire career, visits to continental churches sparked a passionate interest in stained glass. Tiffany began experimenting with the material and in 1875 opened a glass factory-cum-laboratory in Corona, Queens — the core of what eventually became Tiffany Studios, a multimedia decorative-arts manufactory.

Tiffany developed a method in which colors were blended together in the molten state. Recalling the Old English word fabrile, meaning “hand-wrought,” he named the blown glass Favrile, a term that signified handmade glass of unique quality. In his glass designs, Tiffany embraced the emerging Art Nouveau movement and its sinuous, naturalistic forms and motifs. The pieces won Tiffany international fame. (Siegfried Bing, the Paris entrepreneur whose design store, L’Art Nouveau, gave the stylistic movement its name, was the leading European importer of Tiffany pieces.)

By 1902, along with glass, Tiffany was designing stained-glass lamps and chandeliers as well as enameled metal vases, boxes and bowls, and items such as desk sets and candlesticks. Today such pieces epitomize the rich aesthetics of their era. Tiffany Studios table lamps are the most recognizable and the most prized. They range in price from $60,000 to upward of $2 million for intricate shade designs like the Dragonfly. Tiffany glass vases and bowls are generally priced from $1,000 to $30,000 depending on size, color, condition and form. Simpler accessories such as metal trays and small picture frames can fetch from $800 to $3,000. Tiffany design of any type is an emblem of taste and craftsmanship. As you will see on 1stDibs, Louis Comfort Tiffany ensured that each piece he and his company produced, magnificent or modest, was a work of art.

1stDibs Buyer Protection Guaranteed
If your item arrives not as described, we’ll work with you and the seller to make it right. Learn More
About the Seller
4.8
Located in New York, NY
Recognized Seller
These prestigious sellers are industry leaders and represent the highest echelon for item quality and design.
Established in 1971
1stDibs seller since 2010
42 sales on 1stDibs
Typical response time: 1 hour
More From This SellerView All
People Also Browsed
You May Also Like