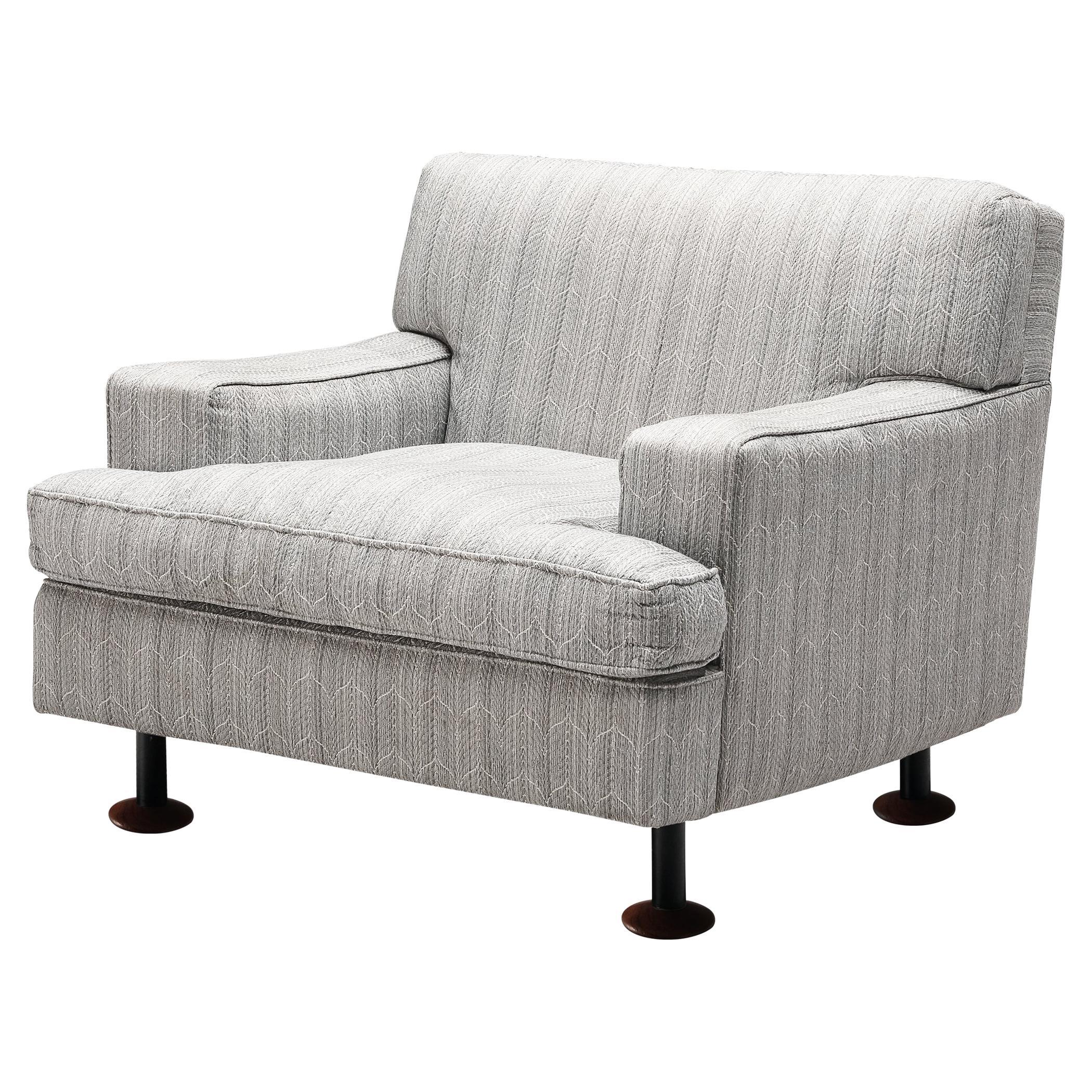 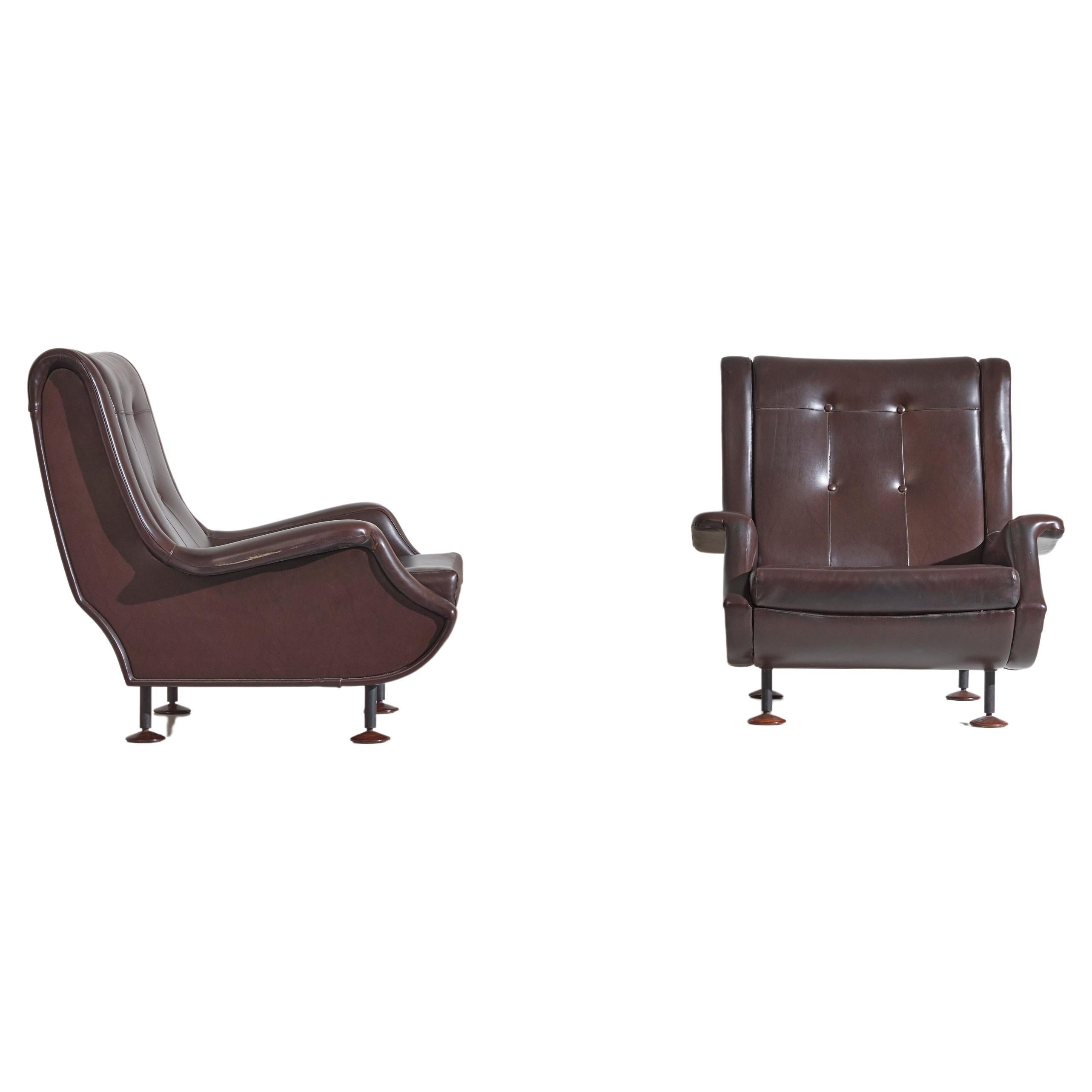 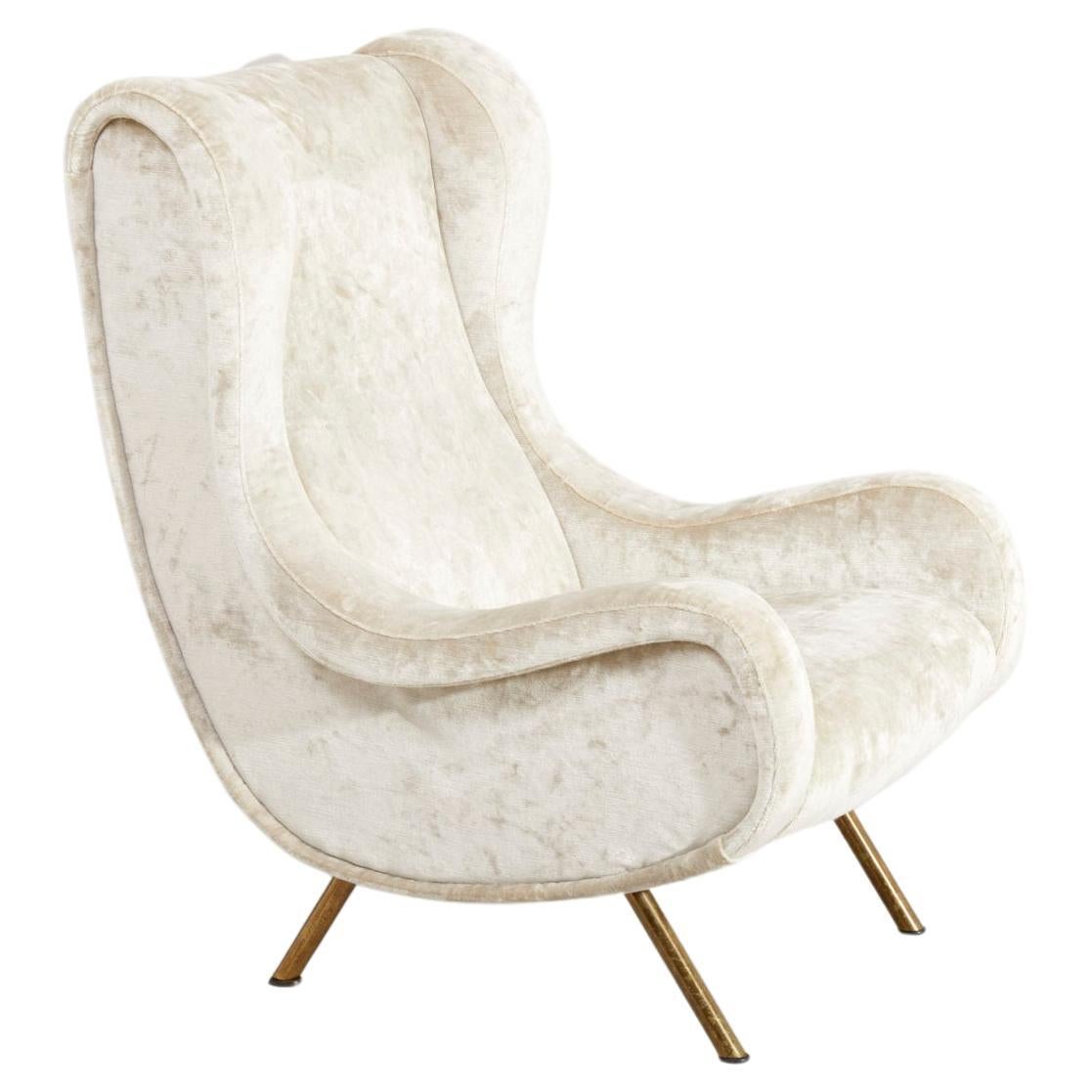 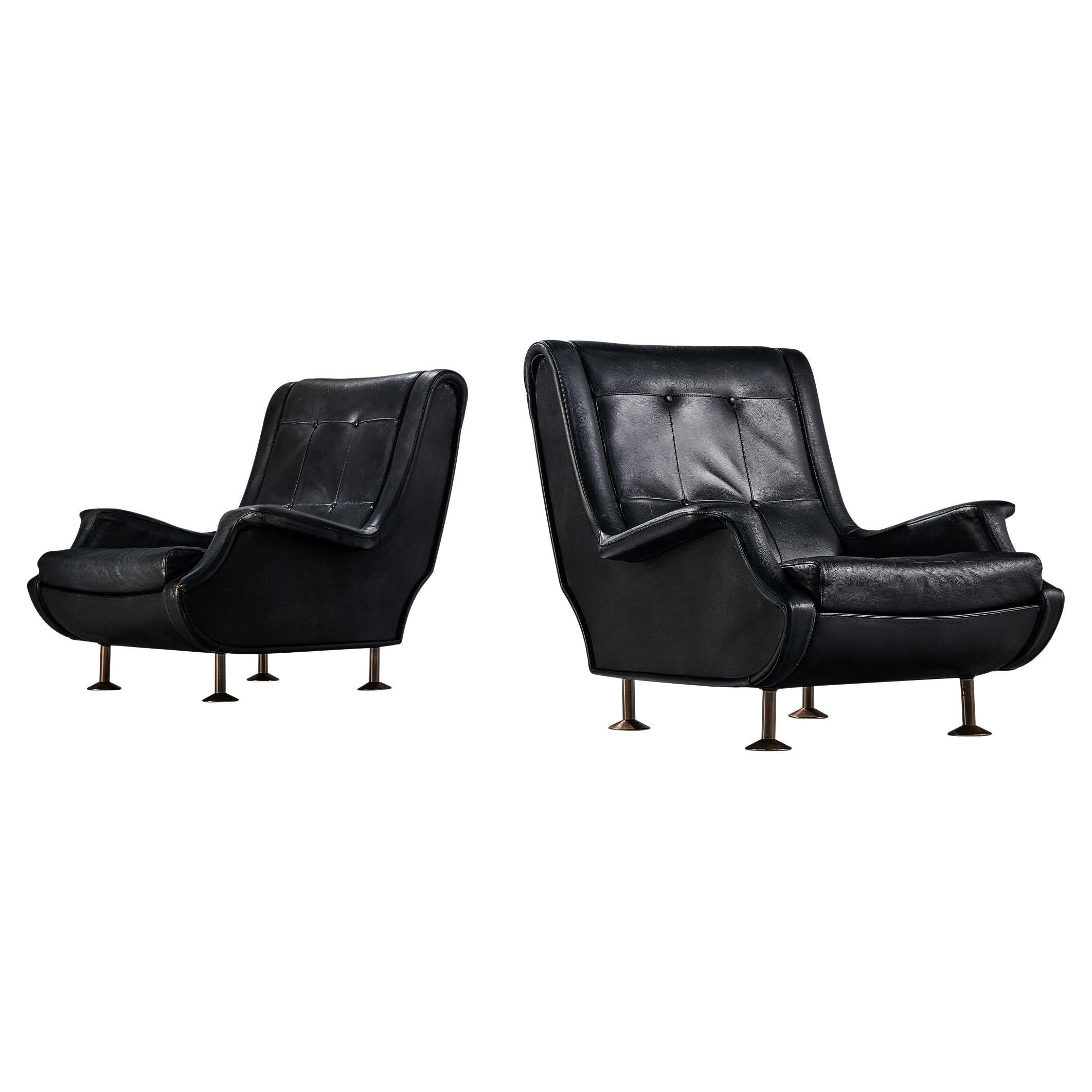 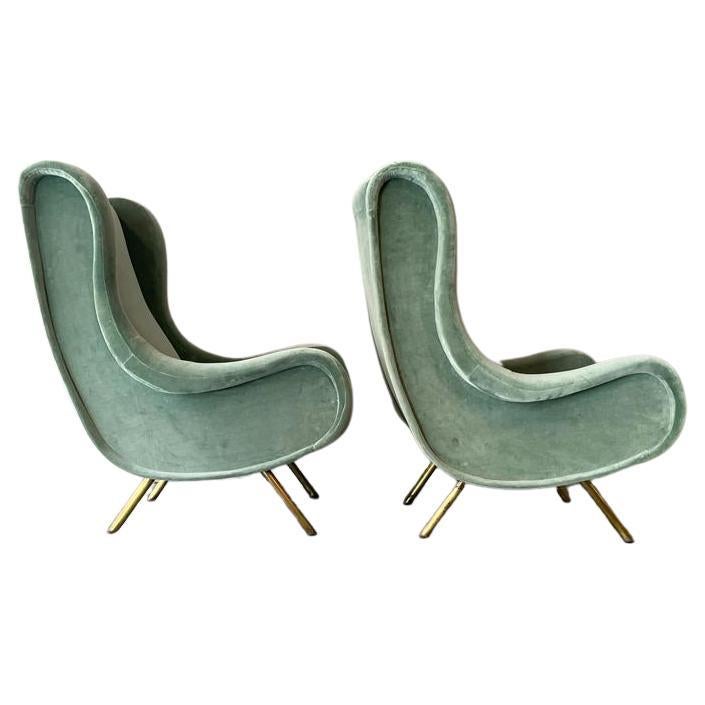 Pair of "Senior" Armchairs by Marco Zanuso for Arflex 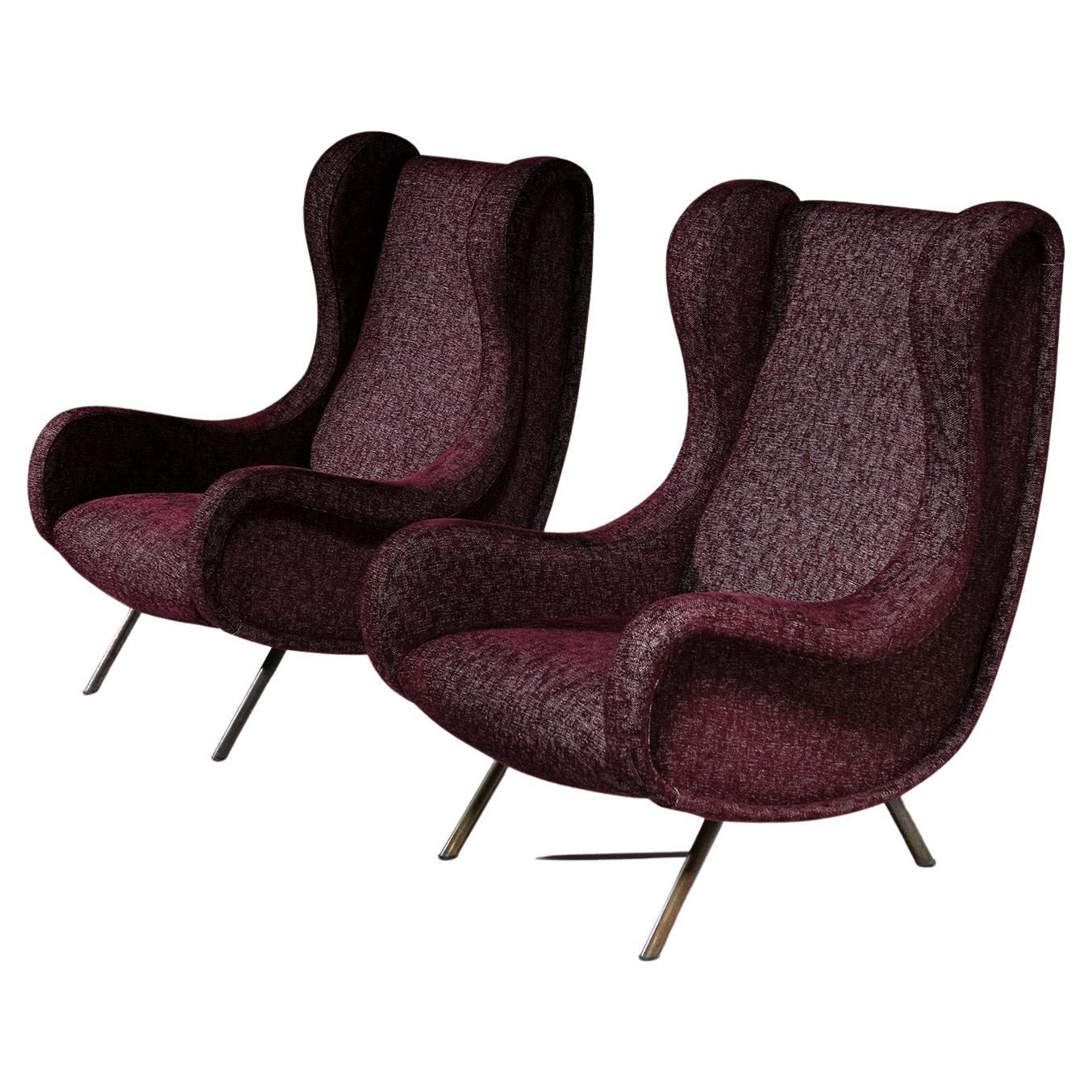 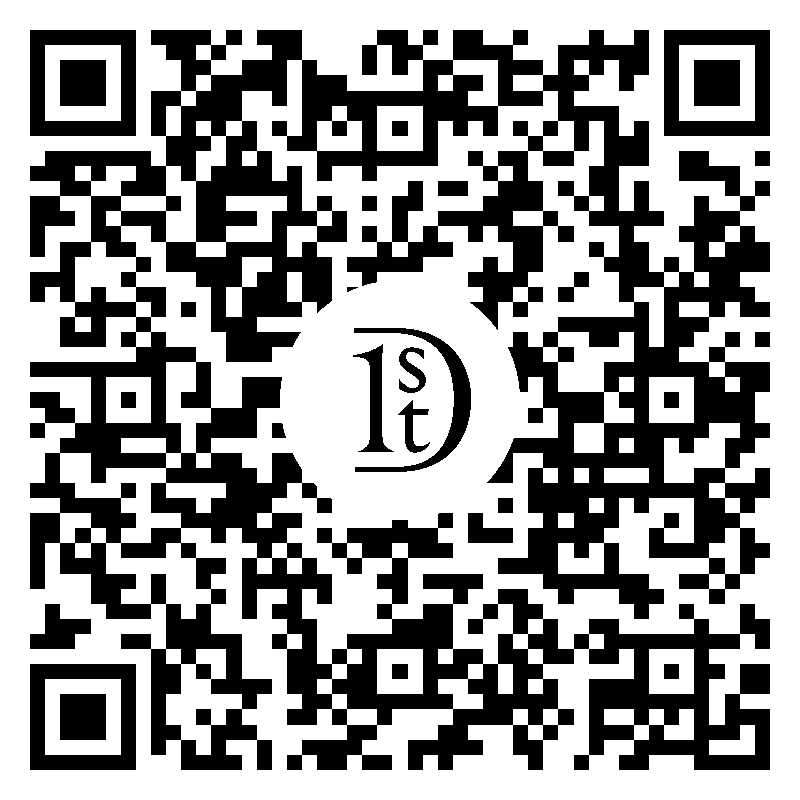 An pair of authentic early Marco Zanuso Senior chairs, Arflex, France, 1960s. The fabric has marks and small areas of damage so these are sold for re-upholstery. We can assist with re-upholstery in COM if required. Fast shipping worldwide. UK customers please note: displayed prices are exclusive of VAT. 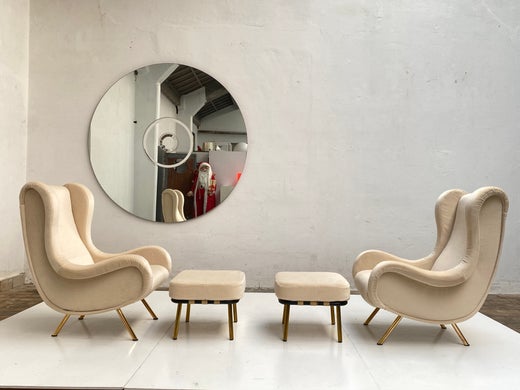 From its unorthodox beginnings, Italian manufacturer Arflex grew into one of the leaders of 20th-century furniture design. Its furniture came to be known for its integration of new materials and bold appeal, and today a variety of vintage Arflex chairs, sofas and tables are emblems of mid-century modernism.

Arflex was established in Milan in 1947 by Pirelli employees Carlo Barassi, Pio Reggiani, Renato Teani and Aldo Bai. Barassi, a Milan Polytechnic graduate and visionary engineer at the Italian tire manufacturer, explored innovative technology and new uses for synthetic materials in domestic products (for Kartell, he codeveloped a ski rack for automobiles). The four founders partnered with a young architect named Marco Zanuso, who also desired to create furniture that featured an application of novel materials such as elastic tape and polyurethane foam.

One of Arflex’s inaugural pieces was Zanuso’s Lady armchair, a seat made of polyurethane foam that was manufactured in pieces and assembled at the very end of the production process. It won a gold medal at the 1951 Milan Triennale. A couple of years later, Arflex collaborated with Studio BBPR to create the office-chic Elettra and Neptunia chairs. The flourishing furniture company quickly established a reputation for compelling products and attracting and working with up-and-coming designers such as Roberto Menghi, who created Hall, a luxurious line of seating that would earn the Compasso d’Oro – Honorable Mention in 1959.

In the 1960s, Arflex continued to welcome the use of new and cutting-edge materials. Popular designs from this decade include Carlo Bartoli's fiberglass and polyester resin Gaia lounge chair and Cini Boer’s Bobo Relax lounger, one of history’s first seating pieces made of polyurethane foam (it has no internal frame). Boer, a pioneer of furniture design in Italy, also created the Strips sofa for the brand in 1972. Part of a plush modular seating system, the Strips sofa became an Arflex icon and was awarded the Compasso d'Oro in 1979.

Arflex continues to work with innovative designers to this day. Among their more recent collaborations is with Swedish design studio Claesson Koivisto Rune. The company's legendary creations are also on display at museums worldwide. The Lady chair, for example, is in the permanent collection of the Museum of Modern Art in New York City.

On 1stDibs, you can find a collection of vintage Arflex lounge chairs, armchairs, coffee tables and other furniture.

1stDibs Buyer Protection Guaranteed
If your item arrives not as described, we’ll work with you and the seller to make it right. Learn More
About the Seller
5.0
Located in London, United Kingdom
Platinum Seller
These expertly vetted sellers are 1stDibs' most experienced sellers and are rated highest by our customers.
1stDibs seller since 2016
332 sales on 1stDibs
Typical response time: 2 hours
More From This SellerView All
People Also Browsed
You May Also Like