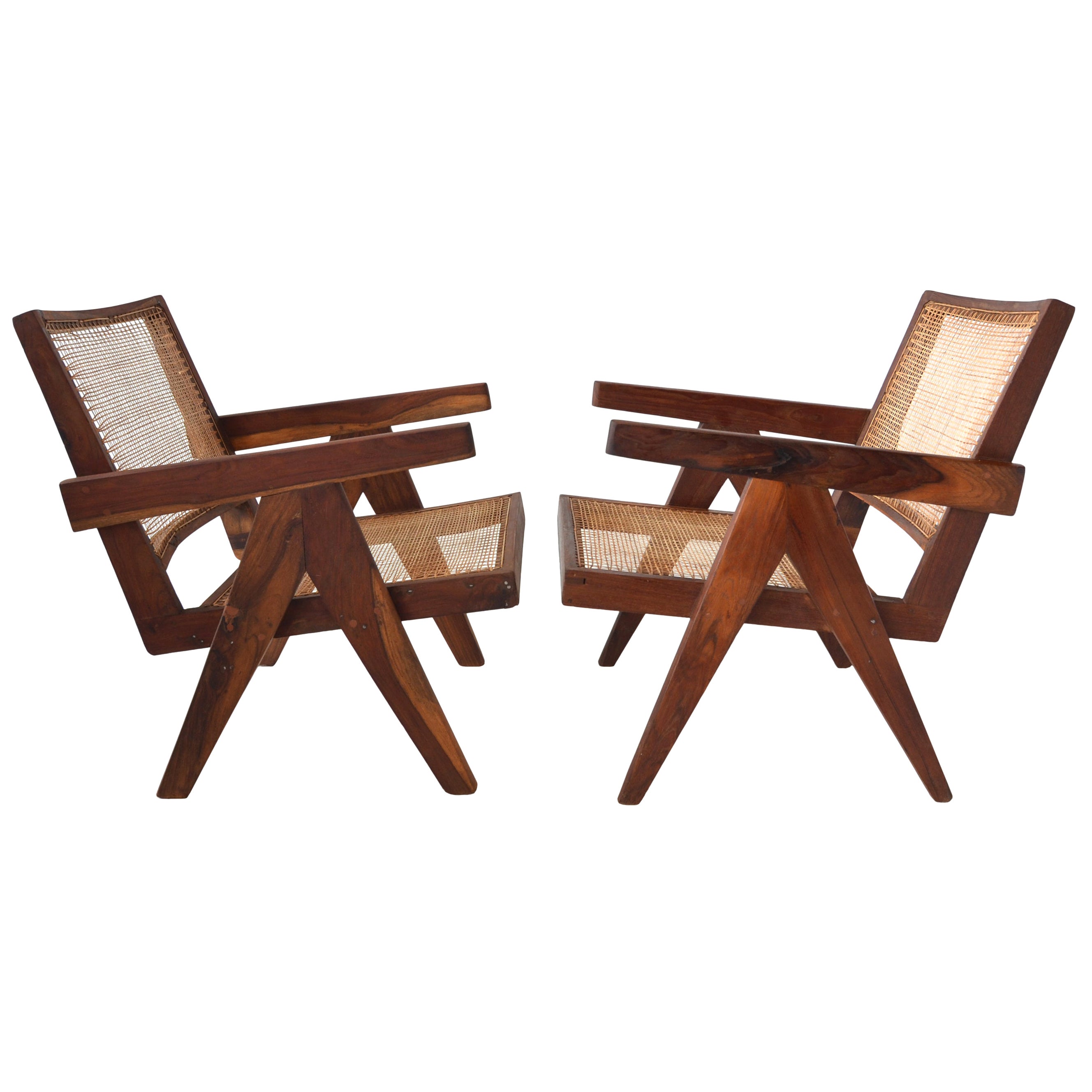 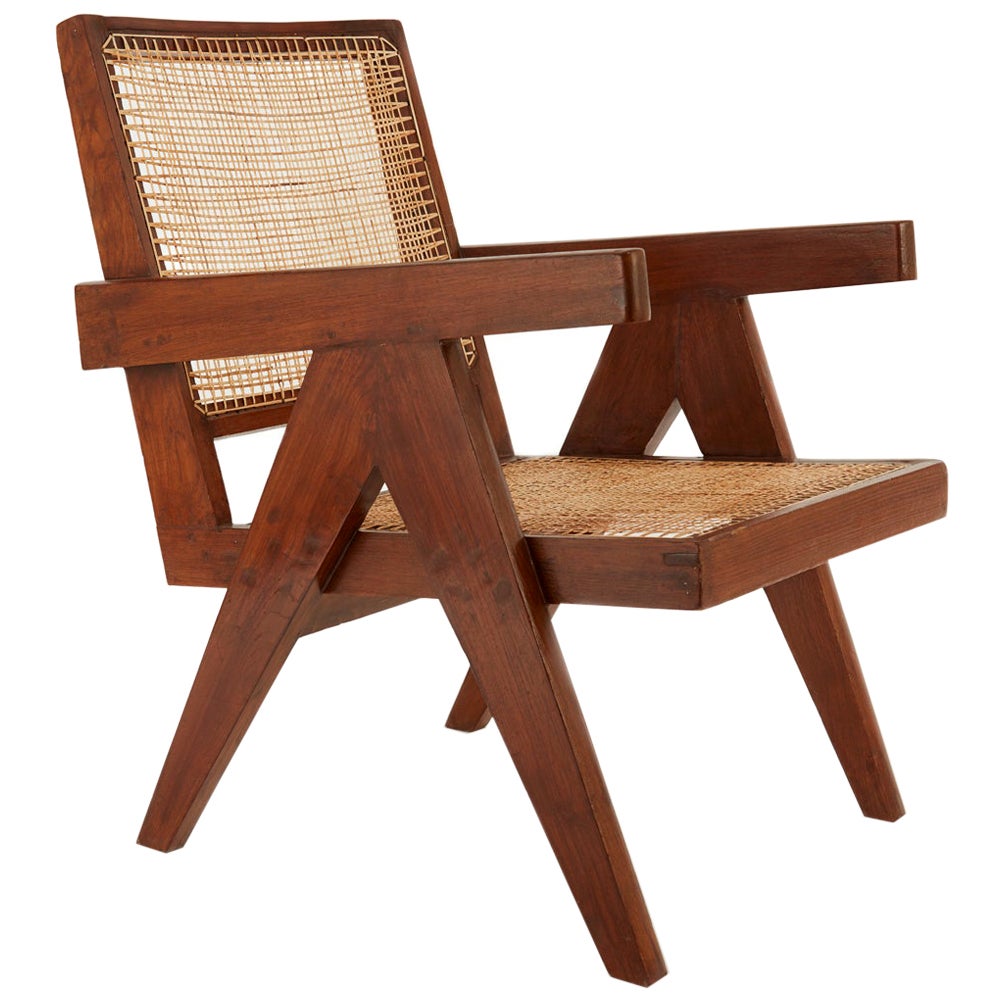 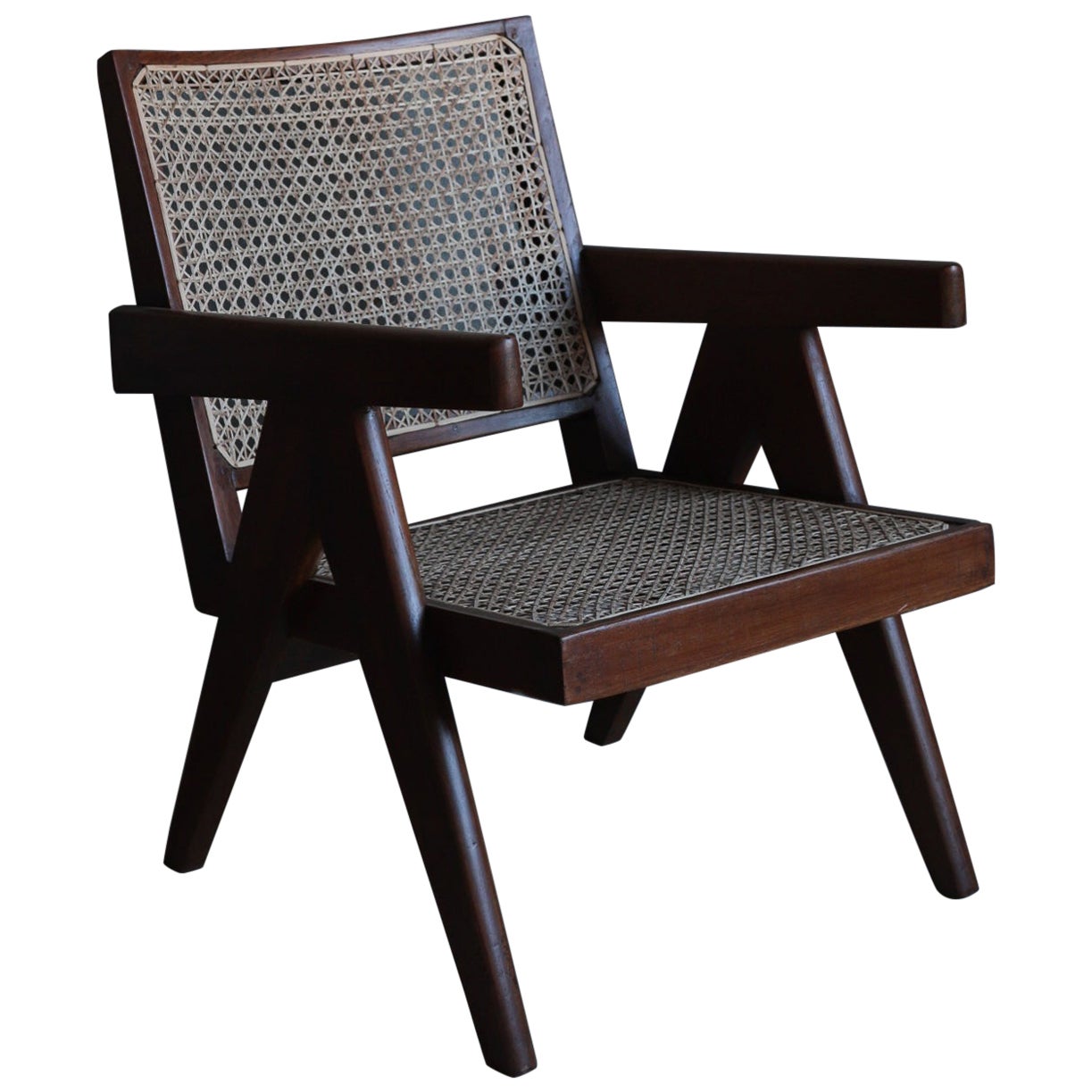 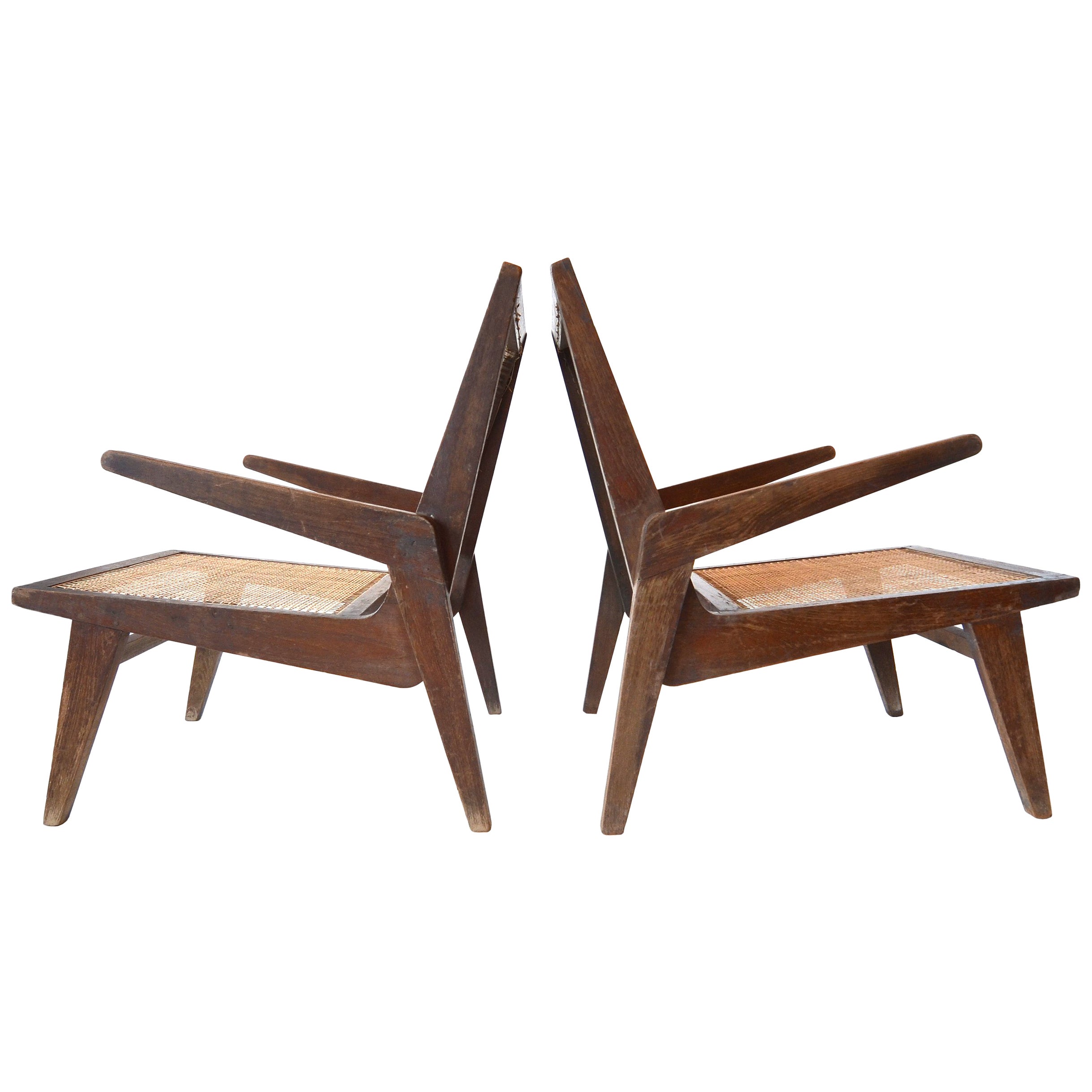 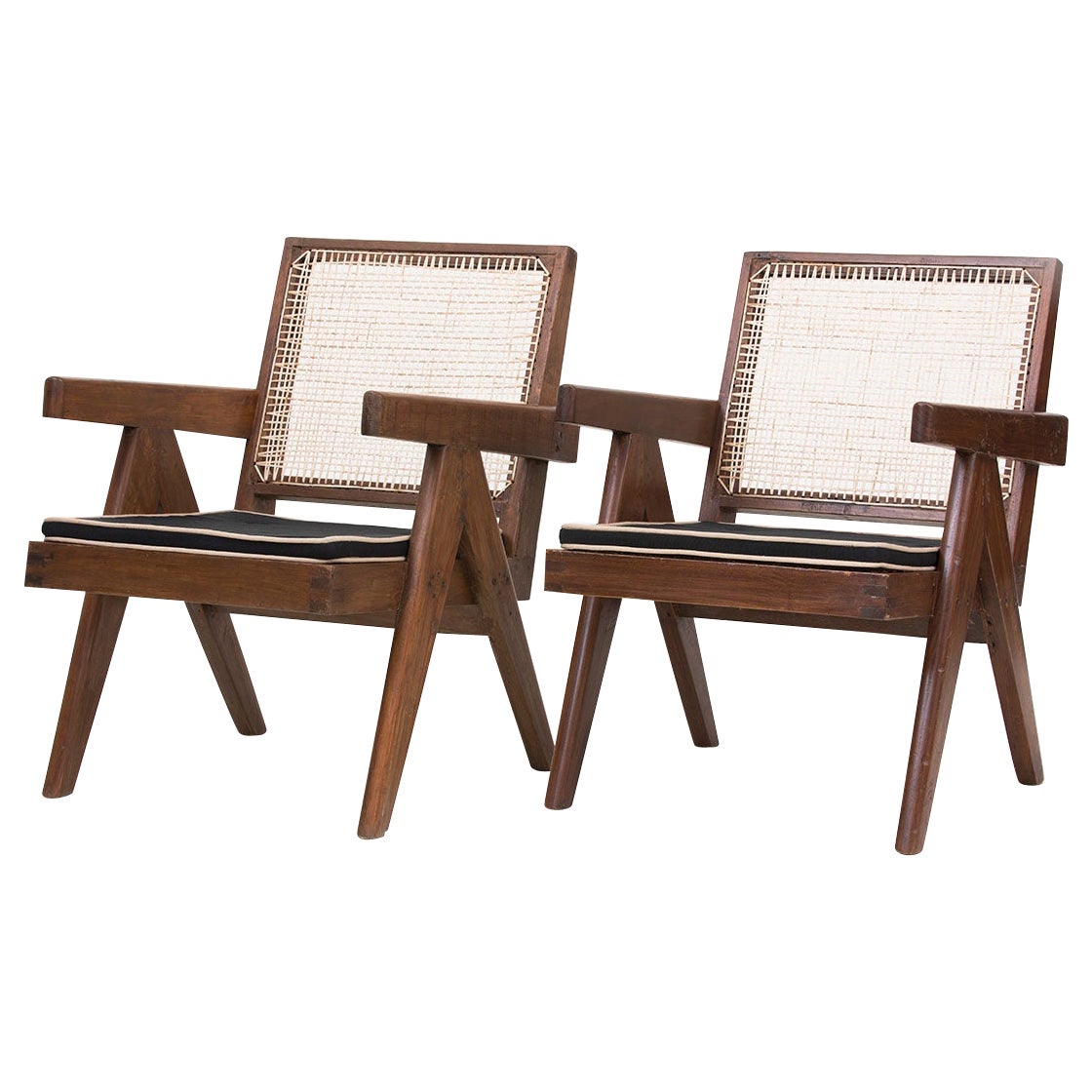 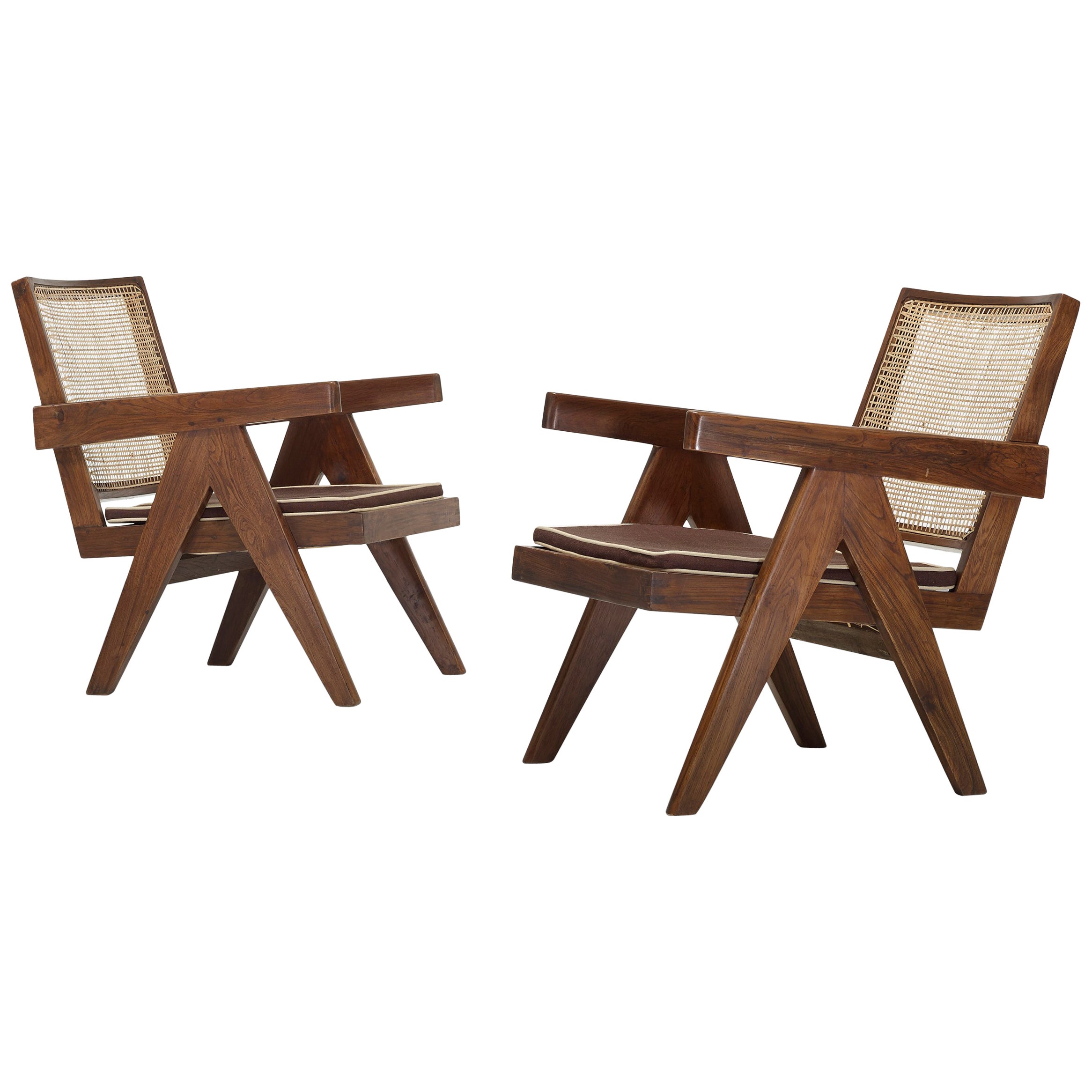 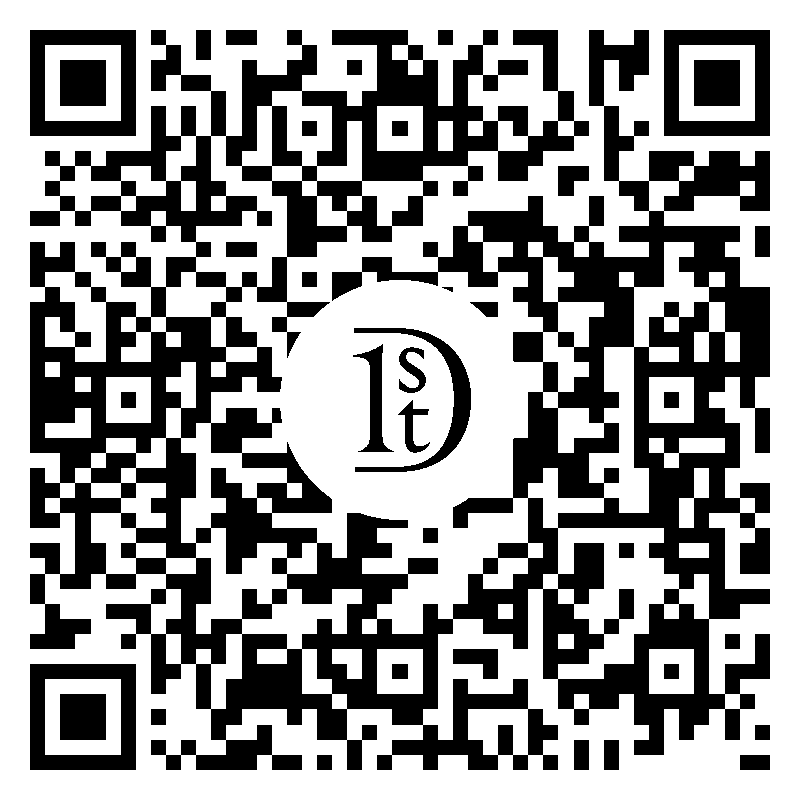 A pair or incredibly rare low armless easy chairs. Model PJ-SI-36-A Designed by Pierre Jeanneret for Private and Student residences, these chairs come up for sale rarely. Some of the most desirable examples of Jeanneret's furniture, these chairs have a shallow width and deep seat which makes them incredibly comfortable and rather useful in any room or seating configuration . They can be used separately as lounge chairs or pushed together as a settee. Very low production. These chairs have been recovered in India and are in a black vinyl. They can be recovered with the textile or leather of choice of the purchaser. I have images of these chairs in situ , prior to restoration and upholstery, during restoration, and as they sit now. Important History for a pair of historically significant chairs. Solid teak legs are in good solid condition . Legs have been left as-is but can be refinished or simply cleaned and waxed as wished by the purchaser. An opportunity to obtain a museum-quality important piece of Chandigarh's history.


Jeanneret studied at the École des Beaux-Arts in Geneva and after he graduated in 1921 he became a partner in Le Corbusier’s office in Paris. The pair collaborated on numerous residential projects, most notably the Villa Savoye, the iconic modernist house in suburban Paris completed in 1931. Jeanneret also worked with the great Charlotte Perriand on the Grand Modele line of tubular metal furnishings that was a sensation at the annual Salon d’Automne design expo in 1929. A rift developed between Jeanneret and his cousin during World War II, as the former joined the French resistance, while Le Corbusier cooperated with the occupation Vichy authorities. The two did not work together again until 1950, when Le Corbusier persuaded Jeanneret to help execute the master plan for the new city of Chandigarh in Punjab, India. Jeanneret lived and worked there until the final years of his life.


A hallmark of Jeanneret’s furniture designs is his great sensitivity to materials. In contrast to the tubular-steel chairs produced by Marcel Breuer and other members of the Bauhaus, the chromed metal pieces designed by Jeanneret and Perriand — including such as the now-classic LC/4 chaise longue and the Grand Confort lounge chair — have a sensuous, relaxed and welcoming look. Conversely, while Jeanneret uses essentially geometric forms for his wooden seating pieces, they exude warmth by nature of the material. One of his first manufactured designs in wood is the Model 92 Scissors chair, licensed by Hans and Florence Knoll when they were touring postwar France. But Jeanneret’s finest work in furniture was done in Chandigarh, and these are the pieces that have earned him recent renown. Crafted of teak, the designs range from low-slung lounge chairs and armchairs with cane seats to desks and tables, most with Jeanneret’s signature drafting compass-shaped legs. Many such pieces on the market today are refurbished, having been found by dealers languishing in scrapyards in India in the late 1990s. Chandigarh is now taking better care of its modernist heritage, making available Jeanneret works all the rarer.

About the Seller
5 / 5
Located in Brooklyn/Toronto, Canada
Vetted Seller
These experienced sellers undergo a comprehensive evaluation by our team of in-house experts.
Established in 1995
1stDibs seller since 2012
40 sales on 1stDibs
Typical response time: <1 hour
More From This Seller
View All From Seller