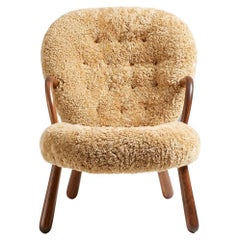 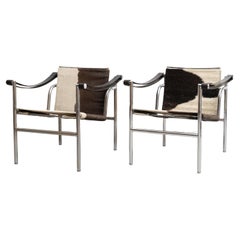 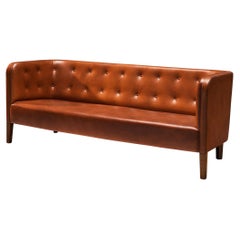 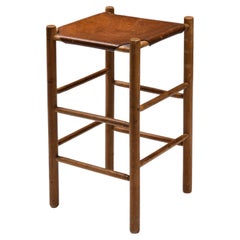 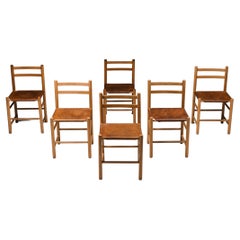 Kitchen Counter Stool, Contemporary Design, Old Silver Steel and Black Leather
By Jover + Valls
Located in Alcoy, Alicante
The Wanderlust contemporary counter stool belongs to a collection of minimalist and serene pieces where exclusivity and precision are shown in small details such as the hand-turned m...
Category

Lincoln Lounge Chair in Blackened Oiled Steel and Full Grain Leather
By Henry Norris, New Format Studio
Located in Vancouver, BC
A single grain leather hide, tensioned with cord lacing underneath the seat, makes up the expanse of this richly textured chair. The blackened frame is patinated and lacquered by han...
Category

Shaped Mat Dining Chair in Teak and Leather
By Uultis Design
Located in Miami, FL
It's impossible to run out of adjectives that adequately describe the mat chair. Impossible. Available with or without a seat back, this chair will define your dining room for years ...
Category

Modern Liberty Armchair Low Back in Polished Brass and White Sheep Fur Cushions
By Bessa
Located in Oporto, PT
Inspiration: The sculptural forms of the 30s inspired the Liberty Collection. The tubular and steel structures that have marked those years are combined with a new inspiration that...
Category

Marius & Marius 3-Seater Sofa by Mario Marenco for Arflex, 1970s
By Arflex, Mario Marenco
Located in amstelveen, NL
Cognac leather 3-seater sofa produced by Arflex in the 70s. Designed by Mario Marenco. Wooden base. The seat, back, and armrests are made of padded cushions.
Category

Vintage Iconic Large Three-seater Antique Brown Leather Chesterfield Sofa, 1920s
Located in Warszawa, Mazowieckie
This three-seater Chesterfield leather sofa was produced in England during the 1920s. It is one of the most recognizable pieces of furniture in the world. The sofa's frame is made of...
Category

Vintage Scandinavian Modern Leather Sofa by C.E. Johansson for Bejra Möbel
Located in Warszawa, Mazowieckie
This Böja three-seater sofa was designed by Carl-Erik Johansson for the Swedish manufacture Bejra Möbel during the 1960s. The organically shaped frame with contoured armrests is made...
Category

Cobra Dining Chair, Set of 6
Located in New York, NY
The Cobra chair features extraordinary design with curved back legs that form part of the armrests and back support in a continuous silhouette. Handcrafted of solid oak in ebony fin...
Category

Basurto 03 Contemporary Wooden Stool with Leather details
By Colección Estudio, Difane
Located in Mexico City, MX
A tribute to the architectural style that characterized Mexico City during the mid-20th century. Inspired by its lines, symmetry, volumes and shapes, each piece is a miniature abstra...
Category

Set of 3 Counter Stool, Old Silver Steel & Cognac Leather, Modern Style
By Jover + Valls
Located in Alcoy, Alicante
The Hug contemporary barstool is designed and conceived with a light aesthetic, the slight oscillation of the steel rod of 12 mm is complemented by the flexibility of the double 3.5 ...
Category

Ottoman Frame Made of Solid Timber and Wood Silk Velvet
Located in London, GB
Sicis is delighted to welcome you at ‘Home’. The classically inspired extent in contemporary plays an eclectic style, elegant and refined. Interiors express personality. A constant...
Category

Ottoman Frame Made of Solid Timber and Wood Silk Velvet