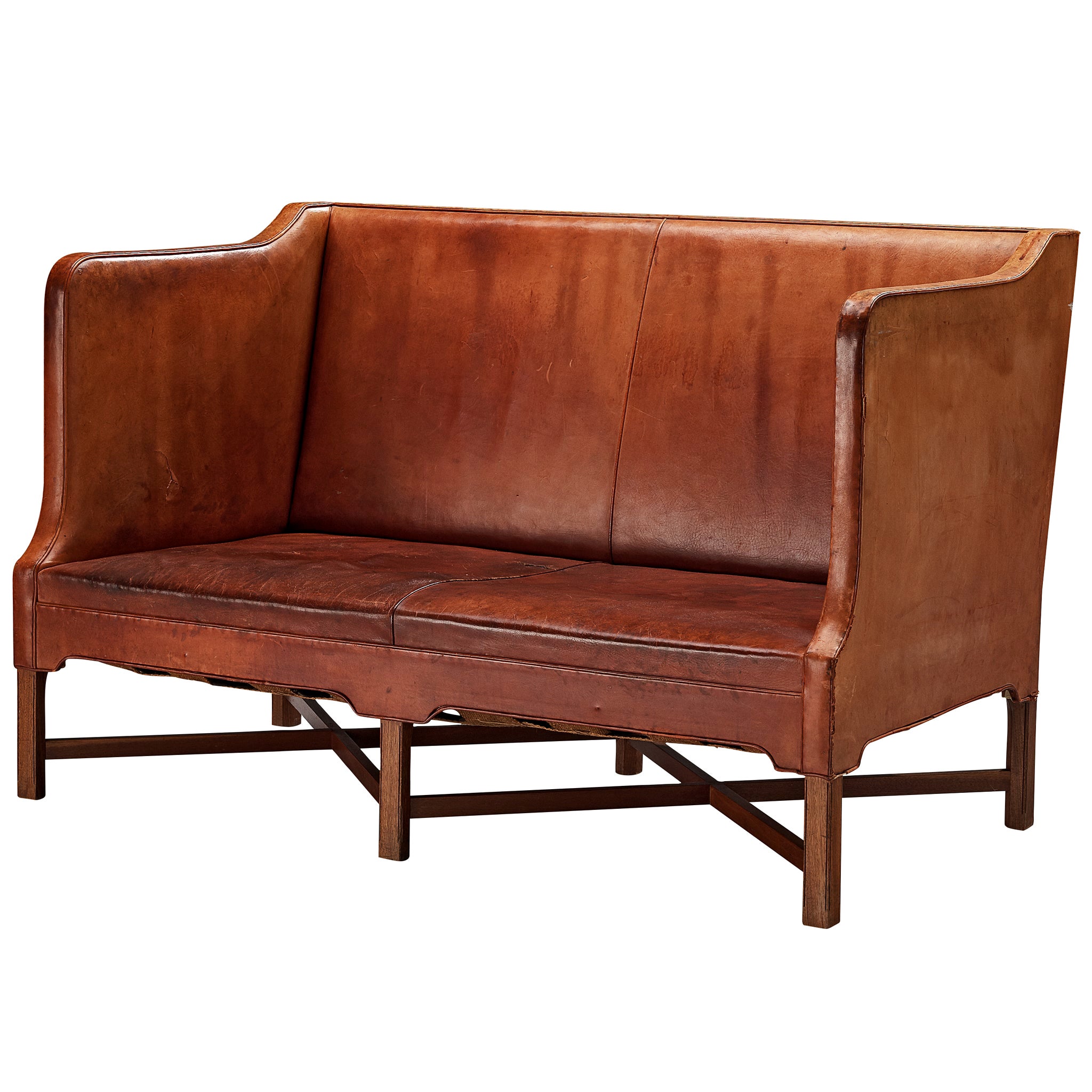 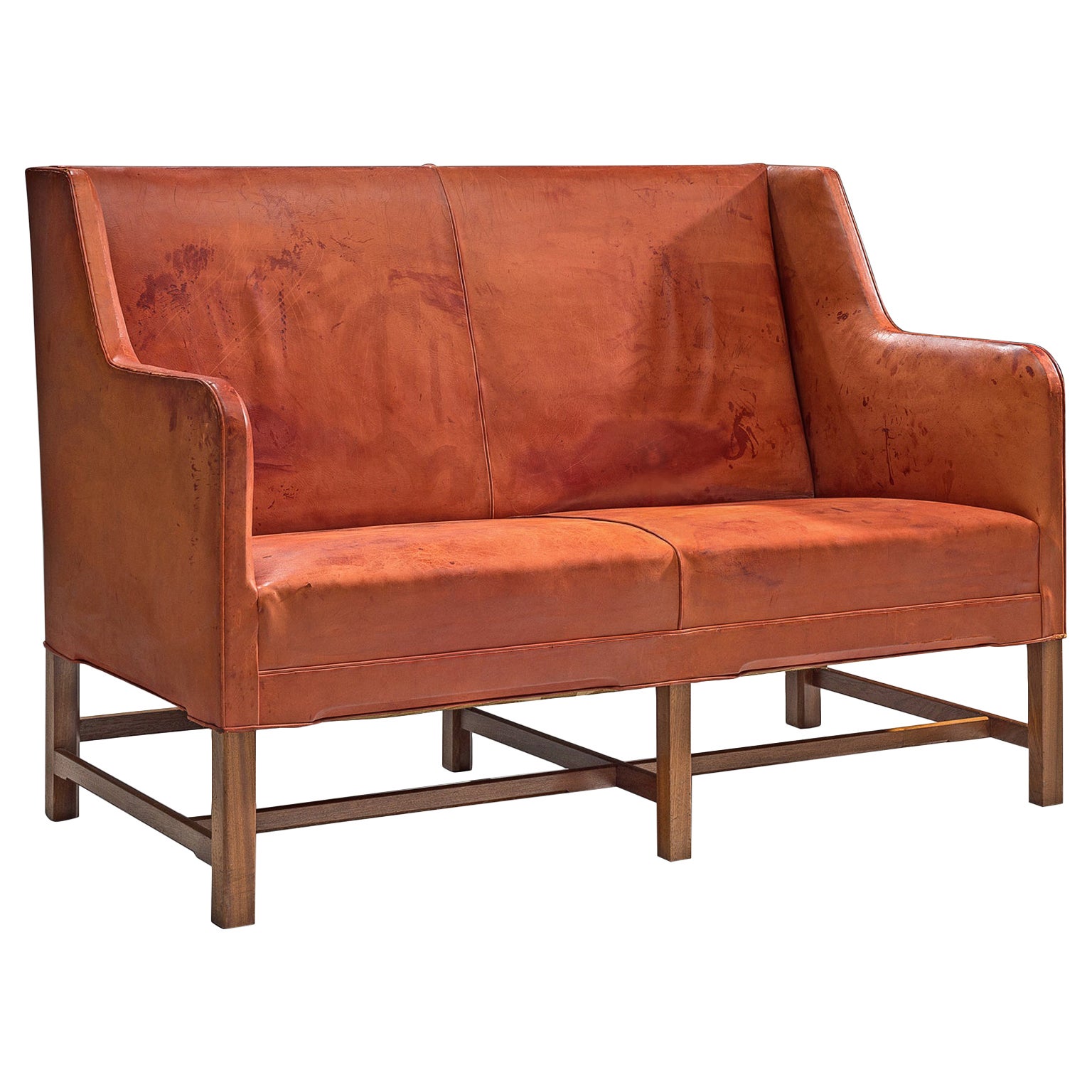 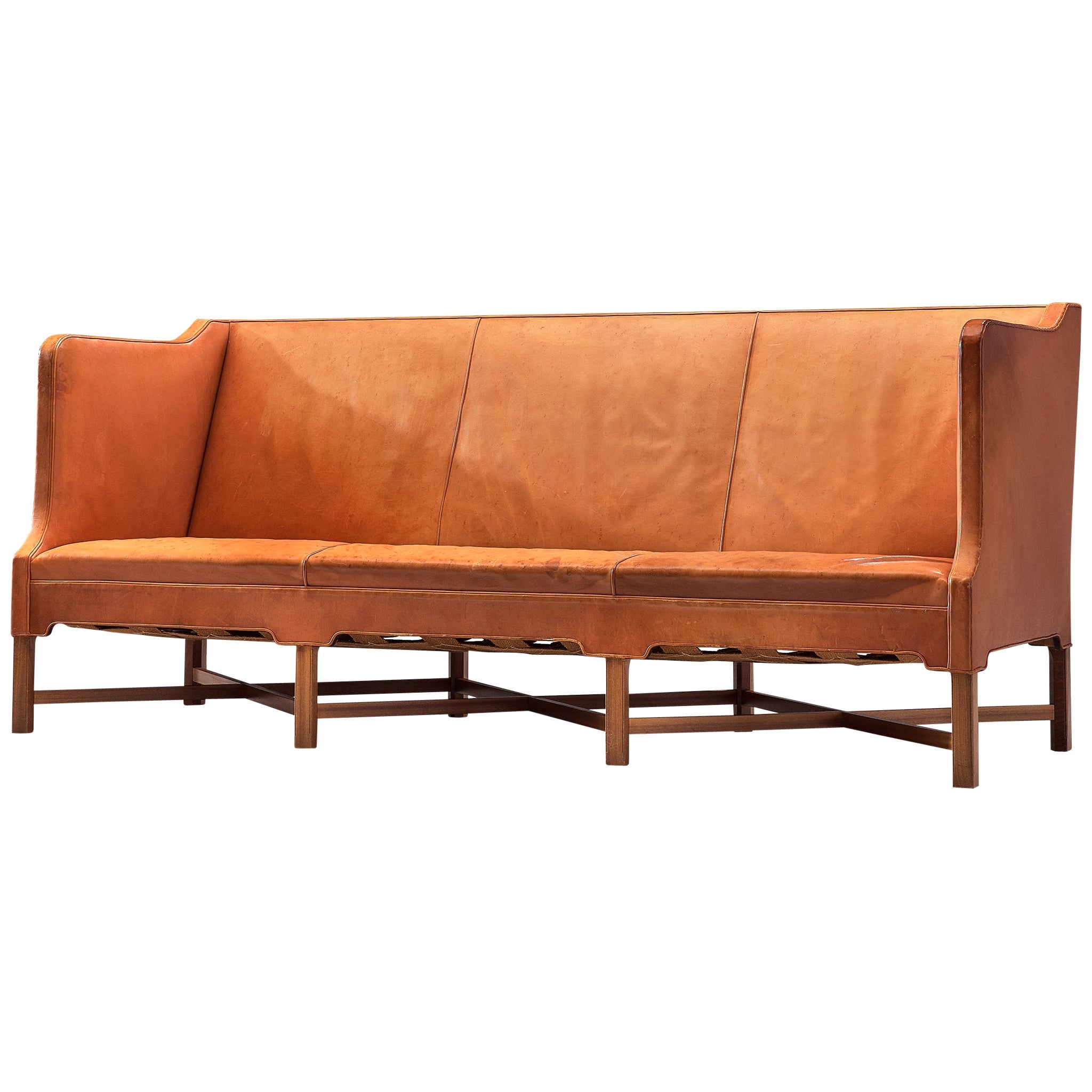 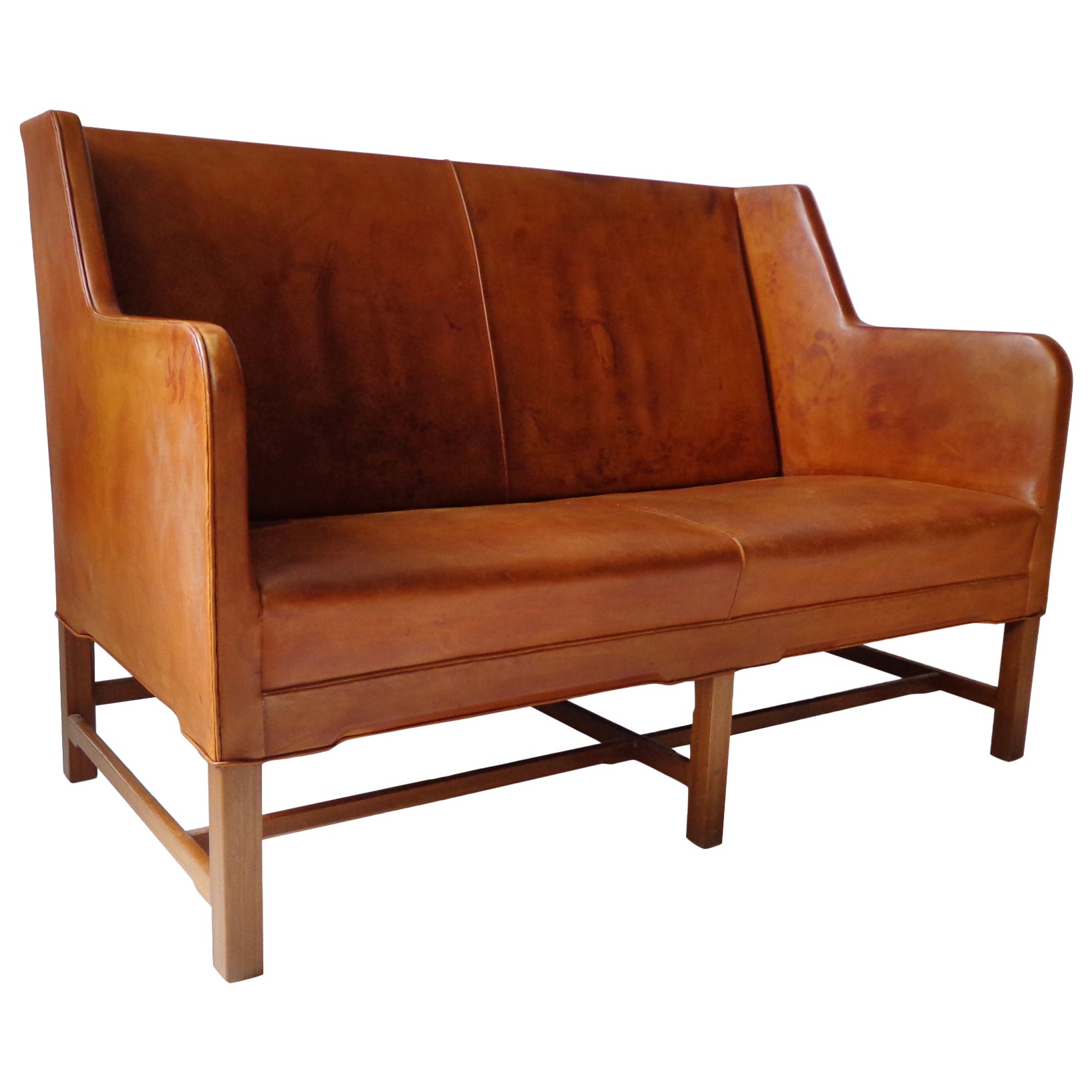 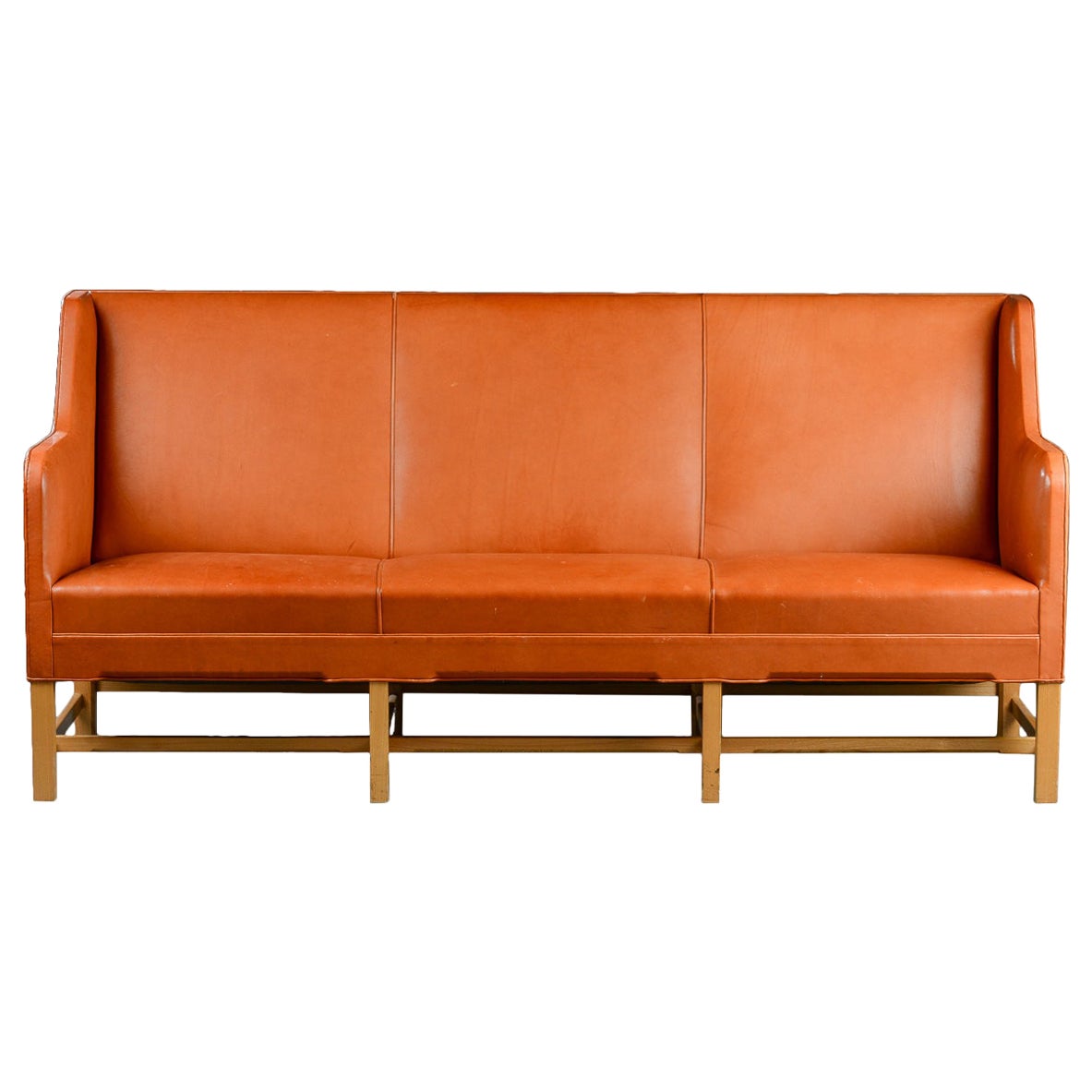 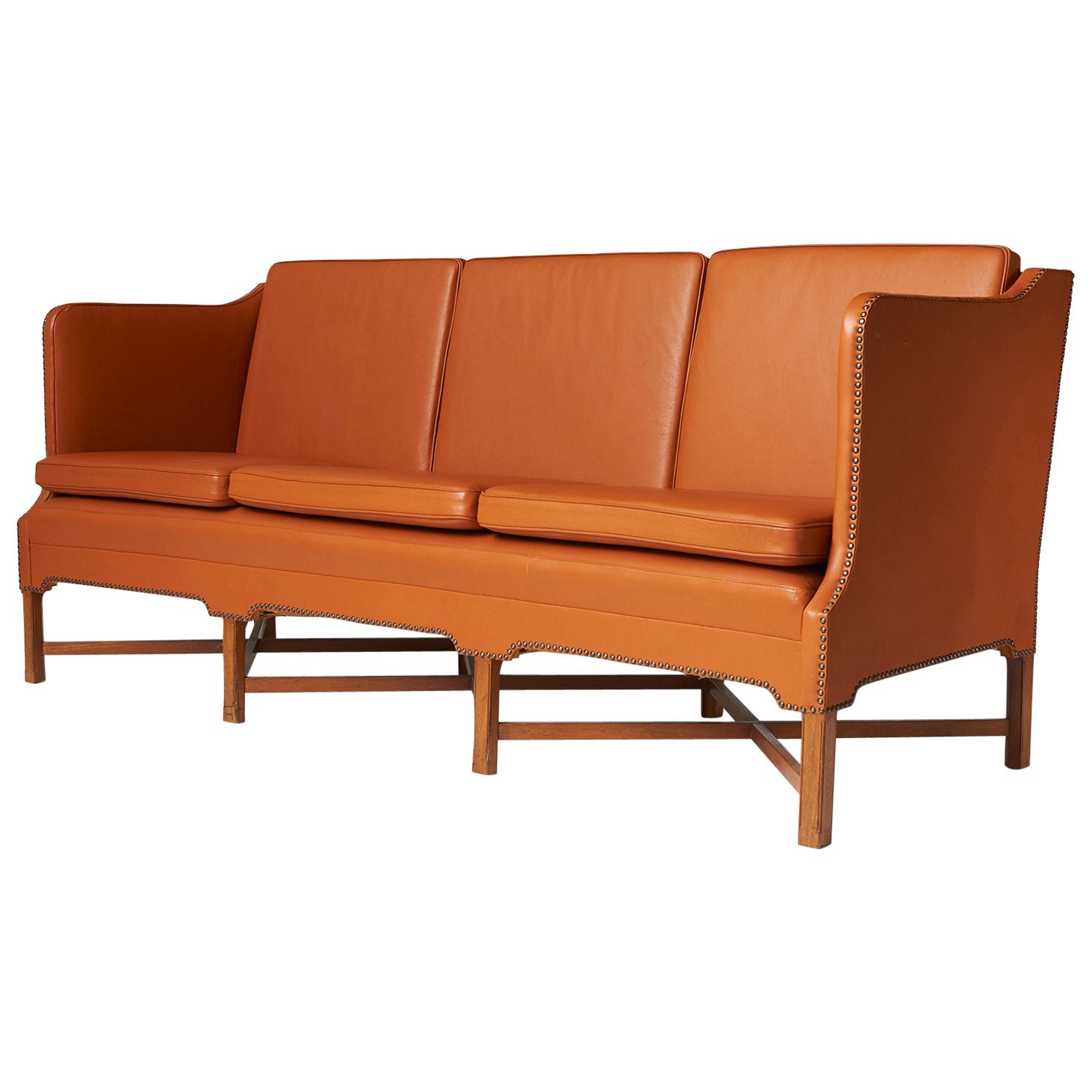 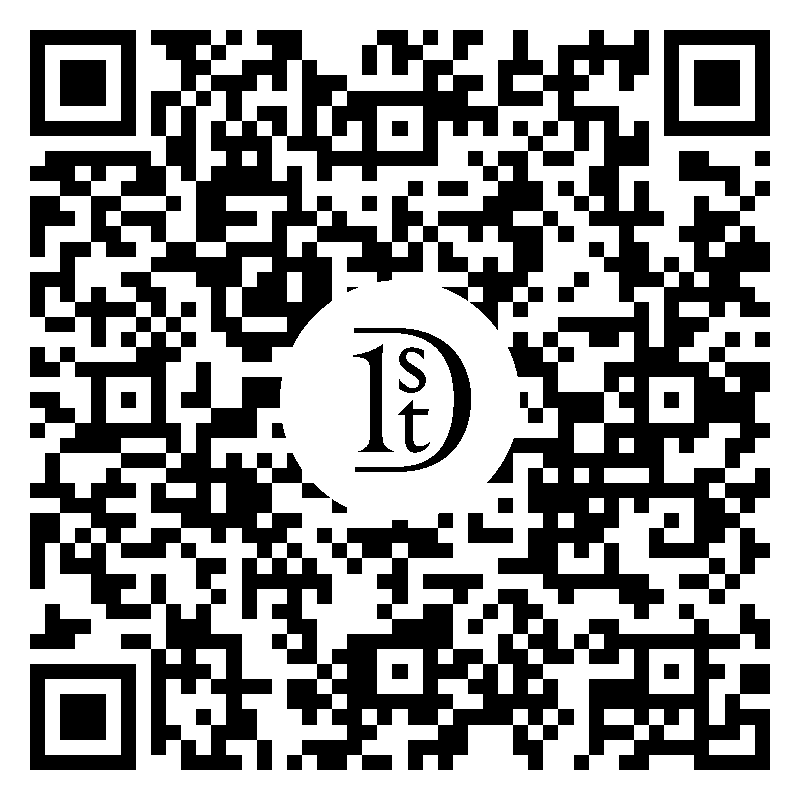 Kaare Klint for Rud Rasmussen, sofa model 4118, leather, wood, Denmark, design 1929 Classic and elegant Scandinavian three-seat sofa by Kaare Klint designed in 1935. The high back is structured by vertical lines into three parts that flow over into the lower armrests. The cognac color of the leather shows rich patina and creates an inviting look. Remarkable is the back of the sofa made in canvas. The base consists of eight legs in mahogany with rhythmic cross-connections. Kaare Klint (1888-1954) was a Danish architect and furniture designer. Klint can be seen as the father of Danish midcentury design. Klint's was the son architect Peder Vilhelm Jensen-Klint who architect, designer and artist who is mainly known for designing the Grundtvigs church in Copenhagen. Kaare Klint himself has walked the same path from architect to designer as his father. In 1924, Klint founded the art academy of Copenhagen where he was professor in furniture design. Klint worked and thought along a few strong principles being the importance of former styles and believed that the only way forward was to have a deep knowledge of craftsmanship. One of his other core design principles was to research functionality and deep knowledge of the working of the human body. Klinkt drew inspiration from the Shakers, Chippendale and Biedermeier. Kaare Klint's style from the 1920s and 1930s has had a lot of influence on other designers in both Europe and the United States. Amongst others, Hans Wegner, Børge Mogensen, Finn Juhl and Poul Kjærholm have taken influence from Klint. Literature: Gorm, Harkær, Klintiana: Kaare Klint, VAT within the EU: When buying or delivering an item within the EU, VAT usually applies and will be added.

Recognized Seller
These prestigious sellers are industry leaders and represent the highest echelon for item quality and design.
Diamond Seller
These expertly vetted sellers are 1stDibs' most experienced sellers and are rated highest by our customers.
Established in 2006
1stDibs seller since 2012
3,120 sales on 1stDibs
Typical response time: 1 hour
Associations
20th Century Specialists
More From This Seller
View All From Seller

$24,000
Kaare Klint Sofa Model #4118 by Rud Rasmussen
By Kaare Klint
Located in San Francisco, CA
A three seat sofa model #4118 in mahogany with "x" stretchers and eight legs. The sofa is upholstered in a caramel color leather with nail trim around perimeter. This sofa is one ...
Category

$11,088
Kaare Klint Model 4118 Two-Seat Box Sofa by Rud Rasmussen
By Kaare Klint, Rud Rasmussen
Located in London, GB
A two-seat 4118 settee designed by Kaare Klint and made by a master cabinetmakers Rud Rasmussen in Denmark, circa 1940. The exquisitely sharp yet flowing lines of the sofa make the h...
Category