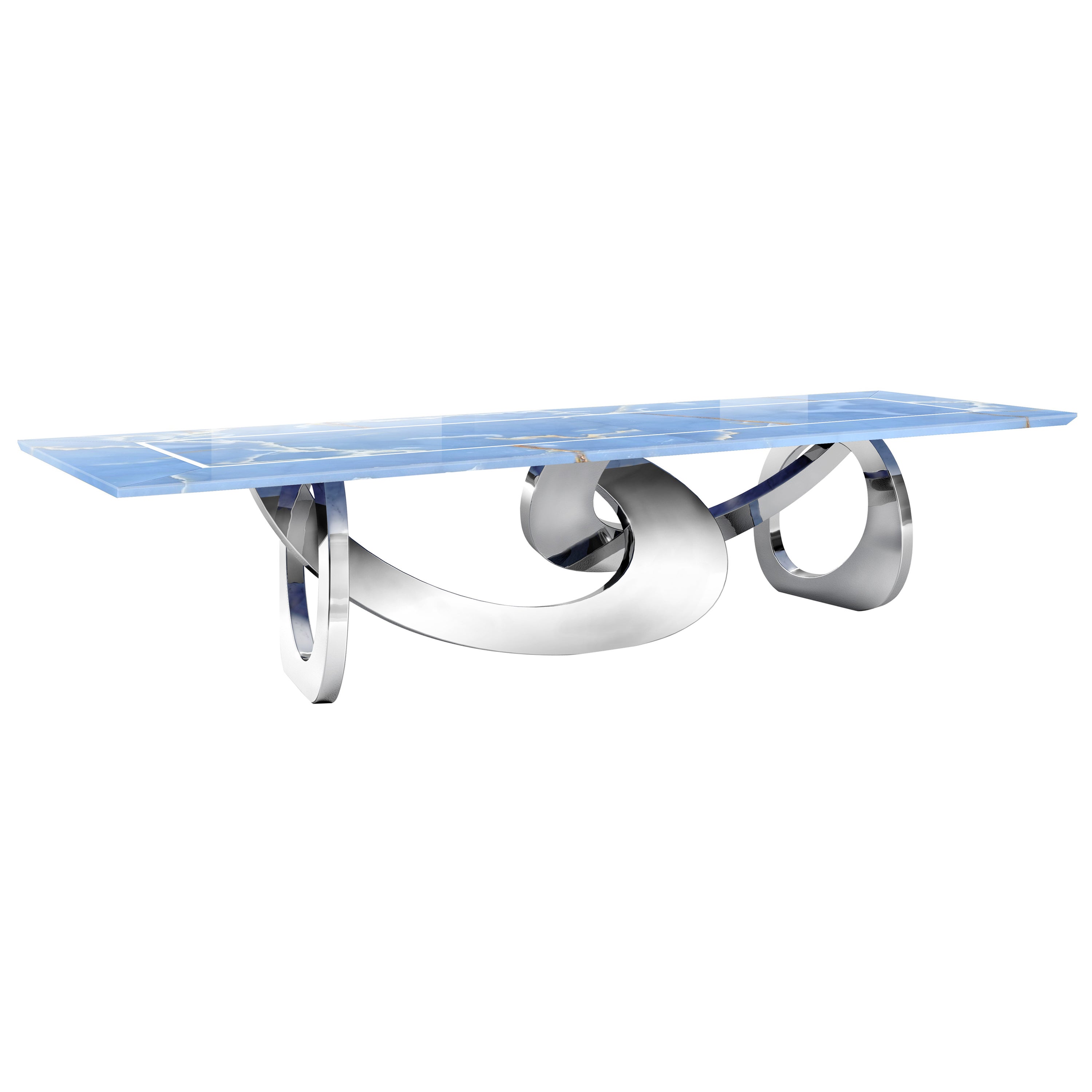 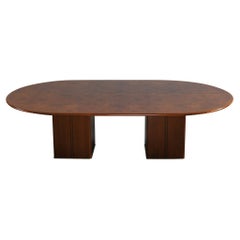 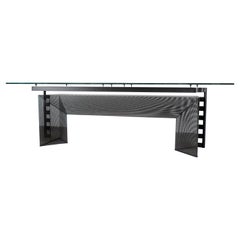 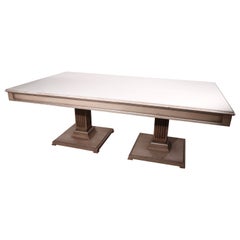 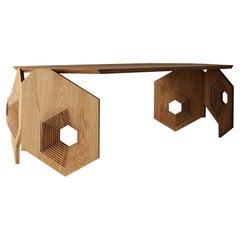 Custom Cross Base Pedestal Table Made from Walnut
By Ken Petersen
Located in Los Angeles, CA
This walnut dining table is seen here in 120" W x 48" D x 30" H with two 20" extensions, expanding to 160", however it can be built in any size. Because each table is bench-made i...
Category

Custom Cross Base Pedestal Table Made from Walnut

Angelo Mangiarotti Quadrifoglio Coffee Table for Skipper, Italy, 1971
By Skipper, Angelo Mangiarotti
Located in Rovereta, SM
Angelo Mangiarotti’s (1921-2012) central philosophy as an architect was to create forms that responded directly to the material’s properties. The weight of marble inspired him to c...
Category

Walnut Slab Live Edge Dining Table, Custom Made by Petersen Antiques
By Ken Petersen
Located in Los Angeles, CA
This custom walnut slab dining table is seen here in 108" x 42" x 30"H, however it can be built in any size. Because each table is bench-made in our own Los Angeles workshop you c...
Category

"Cristoforo" Modern Dining Table
By Sebastiano Bottos
Located in Pordenone, IT
Cristoforo, with all its facets, well interprets the spirit of a free space and time traveller.
Category

Soho Slim Bevel Dining Table with Bronze Legs by Studio Roeper
By Studio Roeper
Located in Napa, CA
The subtle and clean character of the Soho table is meant to withstand the test of time, both stylistically and physically. In Florian Roeper’s words, “the best way to describe our n...
Category

Tobia & Afra Scarpa Large Africa Wooden Conference Table by Maxalto 1970s Italy
By Maxalto, Afra & Tobia Scarpa
Located in Montecatini Terme, IT
Large oval-shaped table in walnut and burl wood with brass details, the tabletop is made in two pieces which are divided over the length, and it is supported by two square column leg...
Category

Custom Built Stainless Steel Base Pedestal or Table in Style of Pace
By Brueton, Pace Furniture Company
Located in Ferndale, MI
Listing is for one table. There are two of these available. Incredibly well made overbuilt steel frame inside of seamless stainless steel pedestal. 3/8 thick steel top flange holds t...
Category

Nanna Ditzel, Freestanding Desk in Teak by Søren Willadsen, 1958, Denmark
By Soren Willadsen Mobelfabrik, Nanna Ditzel
Located in Munster, NRW
This elegant design by Nanna & Jørgen Ditzel serves as a desk, a writing table, library table, or even a console table in a large space. The spare, minimal form is delightful from ...
Category

Vintage White Laminate Custom Parsons Style Rectangle Dining Table
By (after) Jean Michel Frank
Located in Topeka, KS
Stunning vintage white laminate custom made Parson’s style rectangle dining table. Gorgeous condition, keeping in mind that this is vintage and not new so will have signs of use and ...
Category

Iconoclast Modern Hardwood Dining Table by Izm
Located in Edmonton, Alberta
The Iconoclast dining table is made of 100% solid, hardwood and features a unique pedestal base. This piece commands attention and is the perfect center piece for any open plan dinin...
Category

Round Wood Side Table Black Color Oak with Bronze Details by Alabama Sawyer
By Alabama Sawyer
Located in Birmingham, AL
We call this round side table black oak with brass details the Waverly table. This table is made of the finest repurposed urban timber and is so versatile. Sturdy yet lightweight, th...
Category

120" Columbia Trestle Table in Oregon Walnut by Studio Moe
Located in Portland, OR
Purpose and design align in our Columbia trestle table. A solid trestle base is the grounding feature in this beautifully crafted modern take on a traditional form. Sleek with a stro...
Category

Maurits Round Marquetry Table in Reclaimed Oak with Brass Legs by Fred&Juul
By Fred&Juul
Located in Fiesole, Florence
Inspired by the work of Escher, with Maurits we want to prove that a table doesn’t have to be antique to be an impressive testimony of craftsmanship. The marquetry table top in recla...
Category

Large Mahogany Rectangular Conference Table by Leighton Hall
By Leighton Hall Furniture
Located in Suwanee, GA
This is a made-to-order mahogany conference table made in the Leighton Hall shop. It features a field of cathedral mahogany with a straight grain mahogany border and a solid mahogany...
Category

Custom Large Mahogany Rectangular Conference Table by Leighton Hall
By Leighton Hall Furniture
Located in Suwanee, GA
This is a made-to-order mahogany conference table made in the Leighton Hall shop. It features a field of cathedral mahogany with a contrasting mahogany border and a solid mahogany ed...
Category

Vintage, new and antique conference tables are key to designing functional offices, setting the tone through shape and materials.

The evolution of floor plans and office furniture such as desks or office chairs shows how the workplace has changed over the years. One trend in the 20th century was the open floor plan, which was pioneered by Frank Lloyd Wright. The profoundly influential architect’s design for the 1936 office building for SC Johnson Wax was an early example. Soon, major American furniture manufacturers would take aim at creating furnishings for the workplace.

In 1942, Herman Miller, anticipating a postwar economic boom, began making office furniture for the first time, while at Knoll, a special office-focused division created by Florence Knoll in the mid-1940s designed office spaces for the likes of GM and CBS.

Open-floor-plan offices became mainstream by the mid-century as a way to reflect a company’s values. Working in an open space meant that employees were equal and the design was aimed at improving communication and cooperation. The conference table was key to this vision. Businesses with an open floor plan needed a place for meetings and this ensured that the conference table and conference room became staples of the modern office.

The style and color of the table are also important. A bold color can make participants feel more creative; a unique shape can evoke innovation and modernity. Creatives often invest in eye-catching furniture to express their company’s individuality.