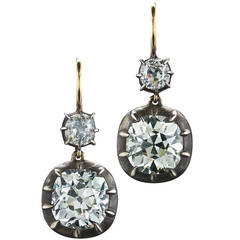 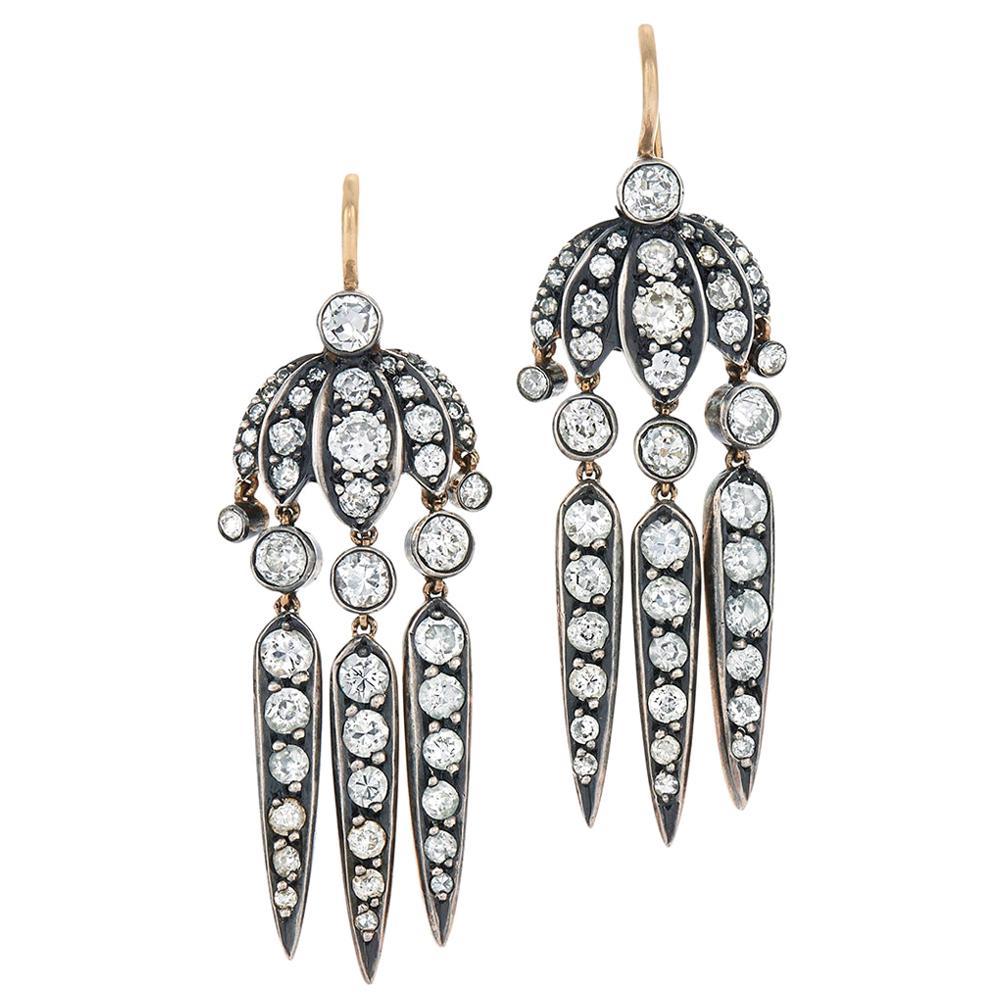 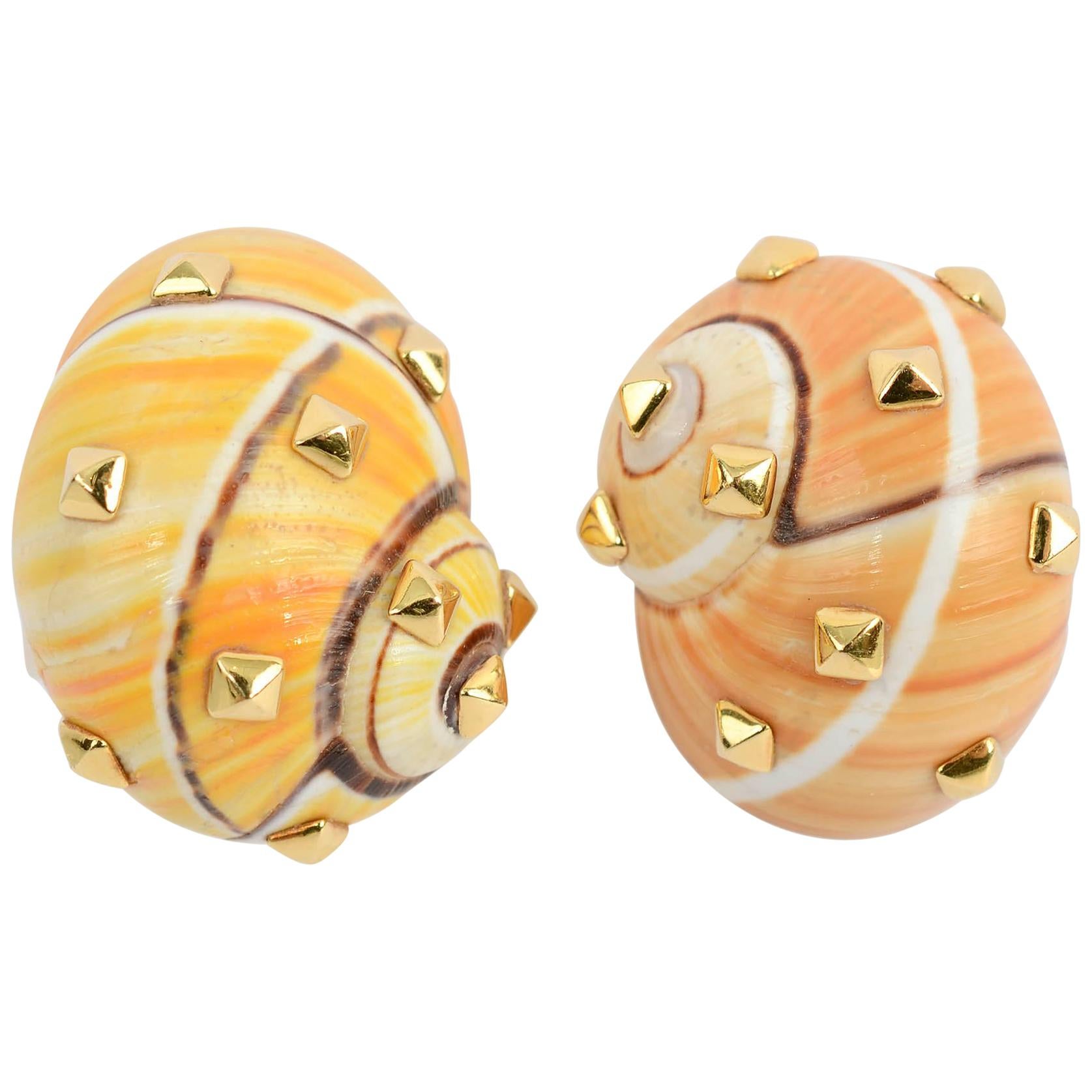 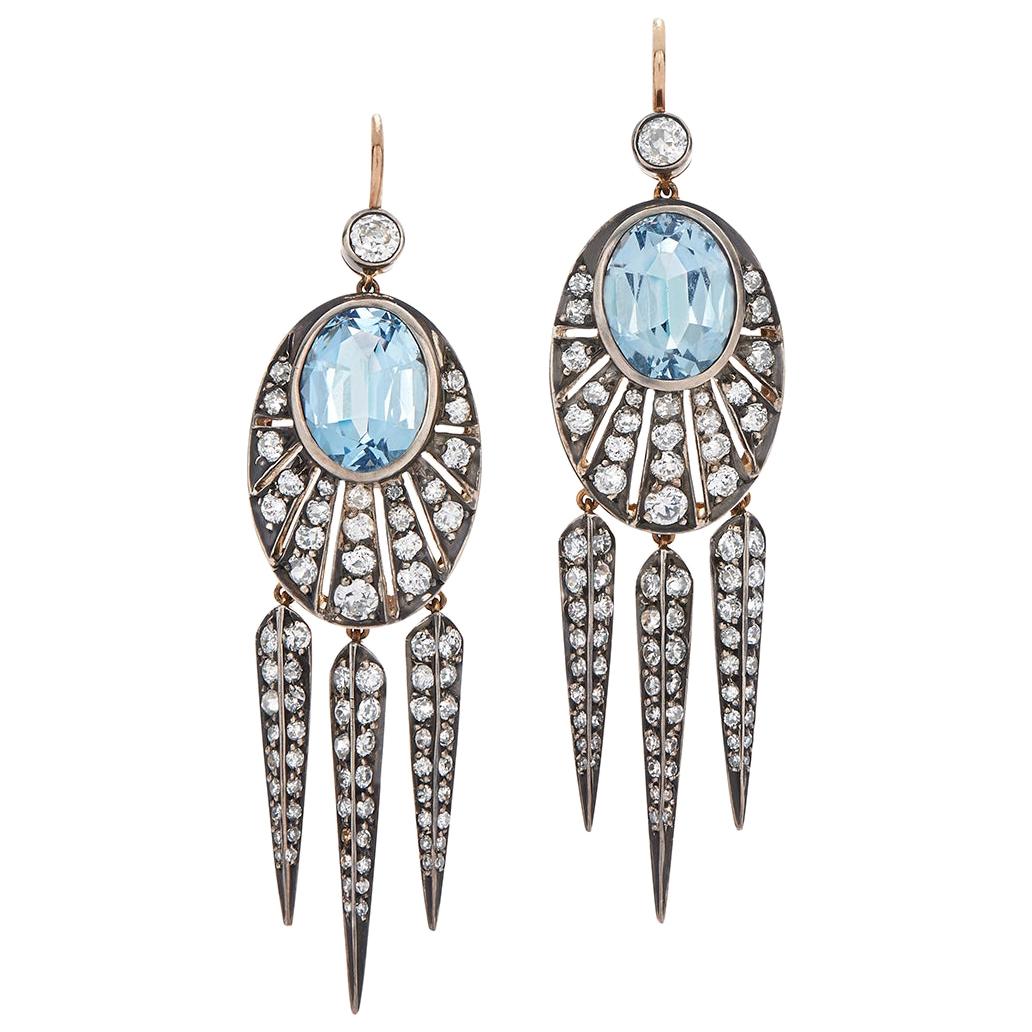 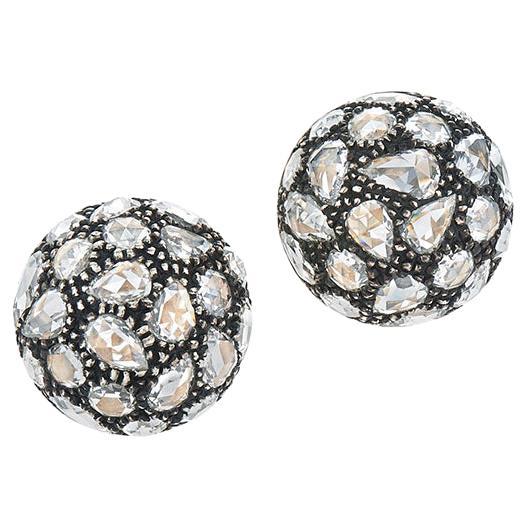 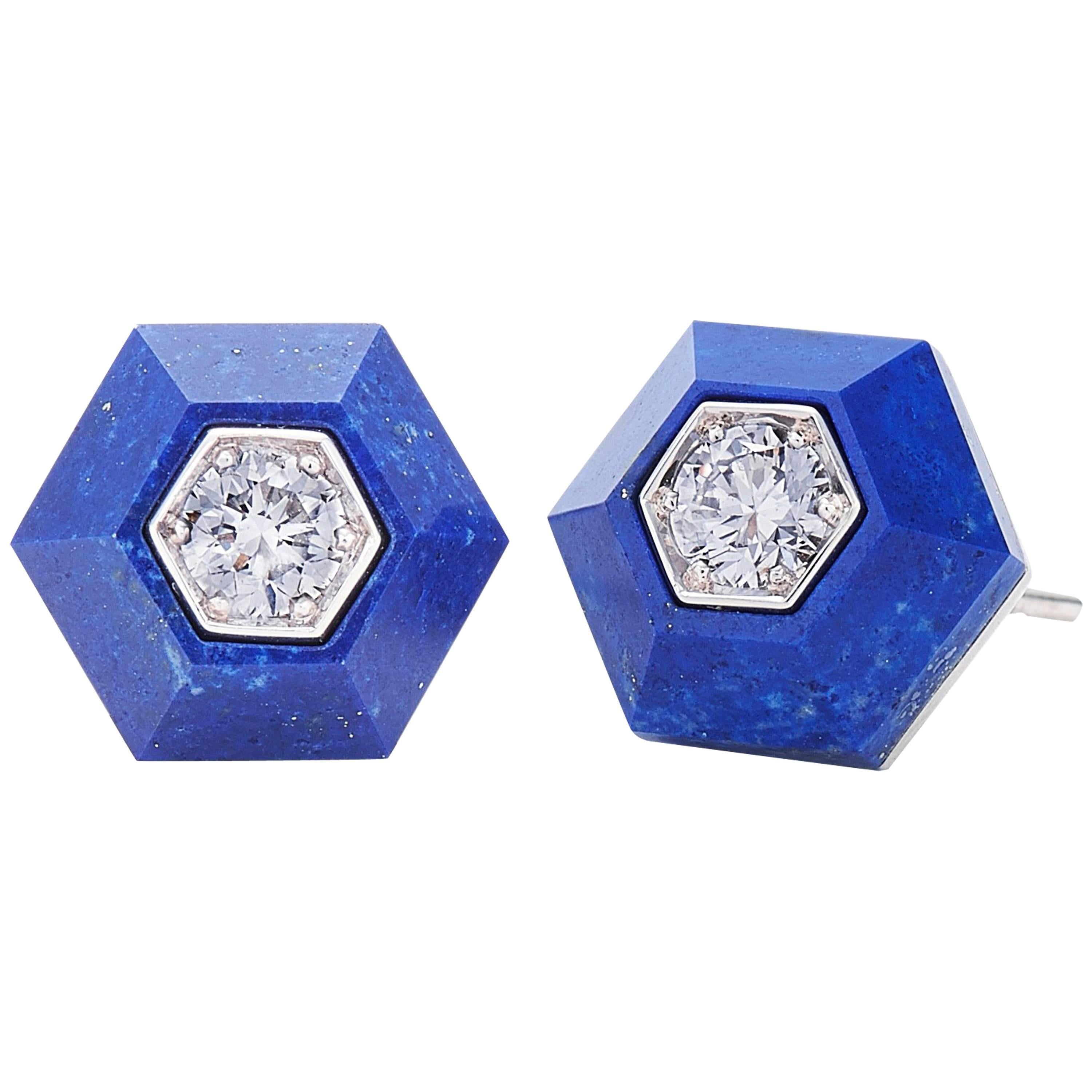 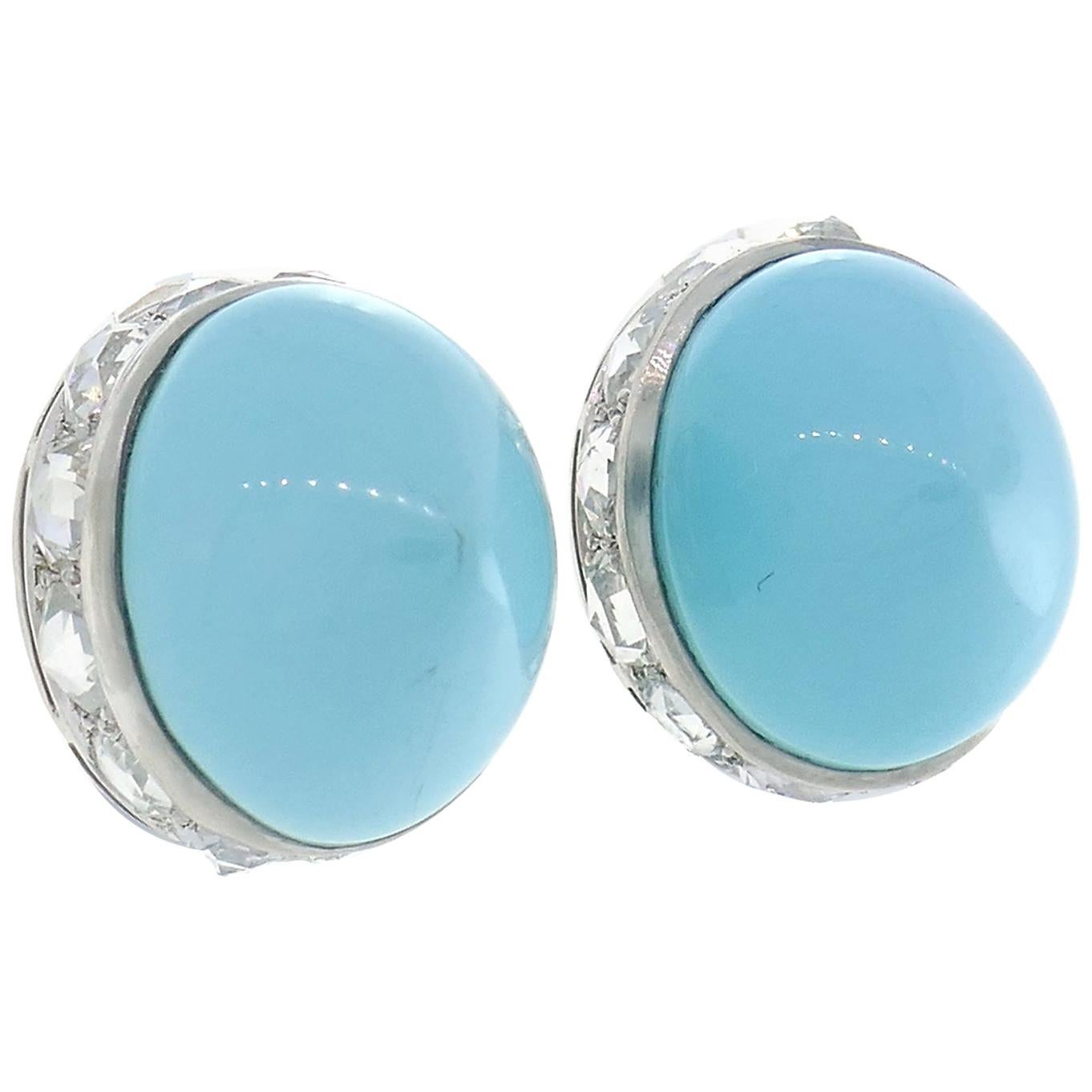 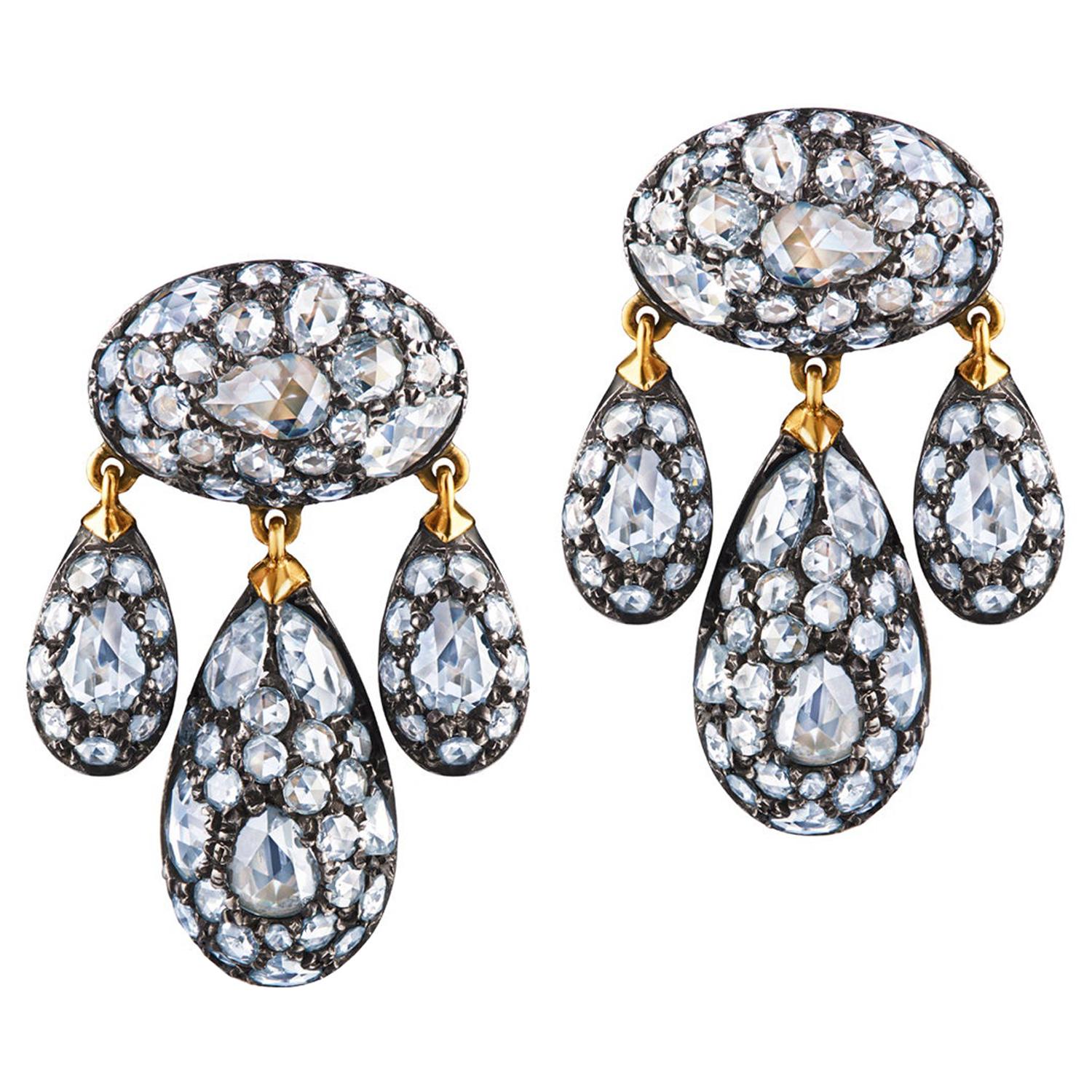 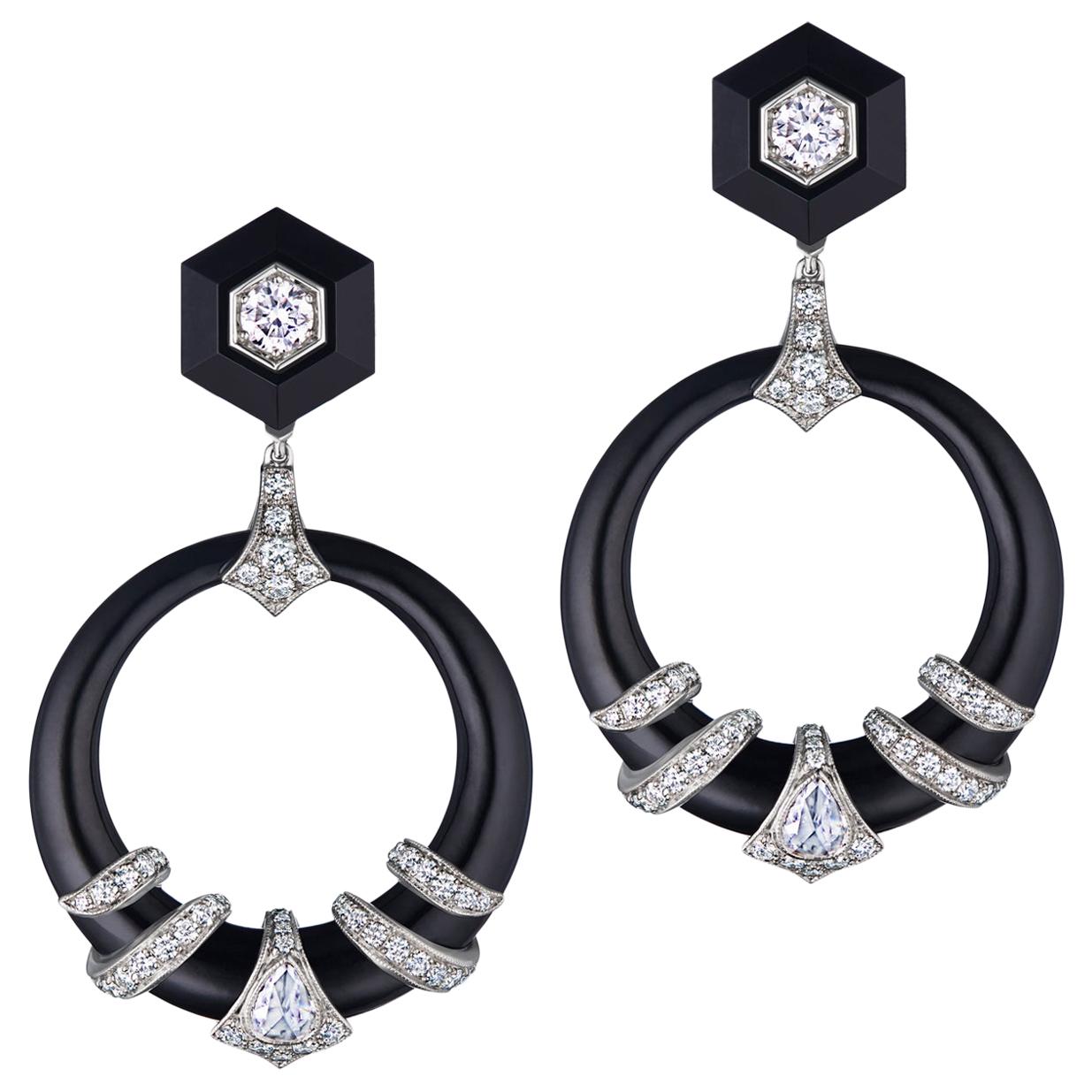 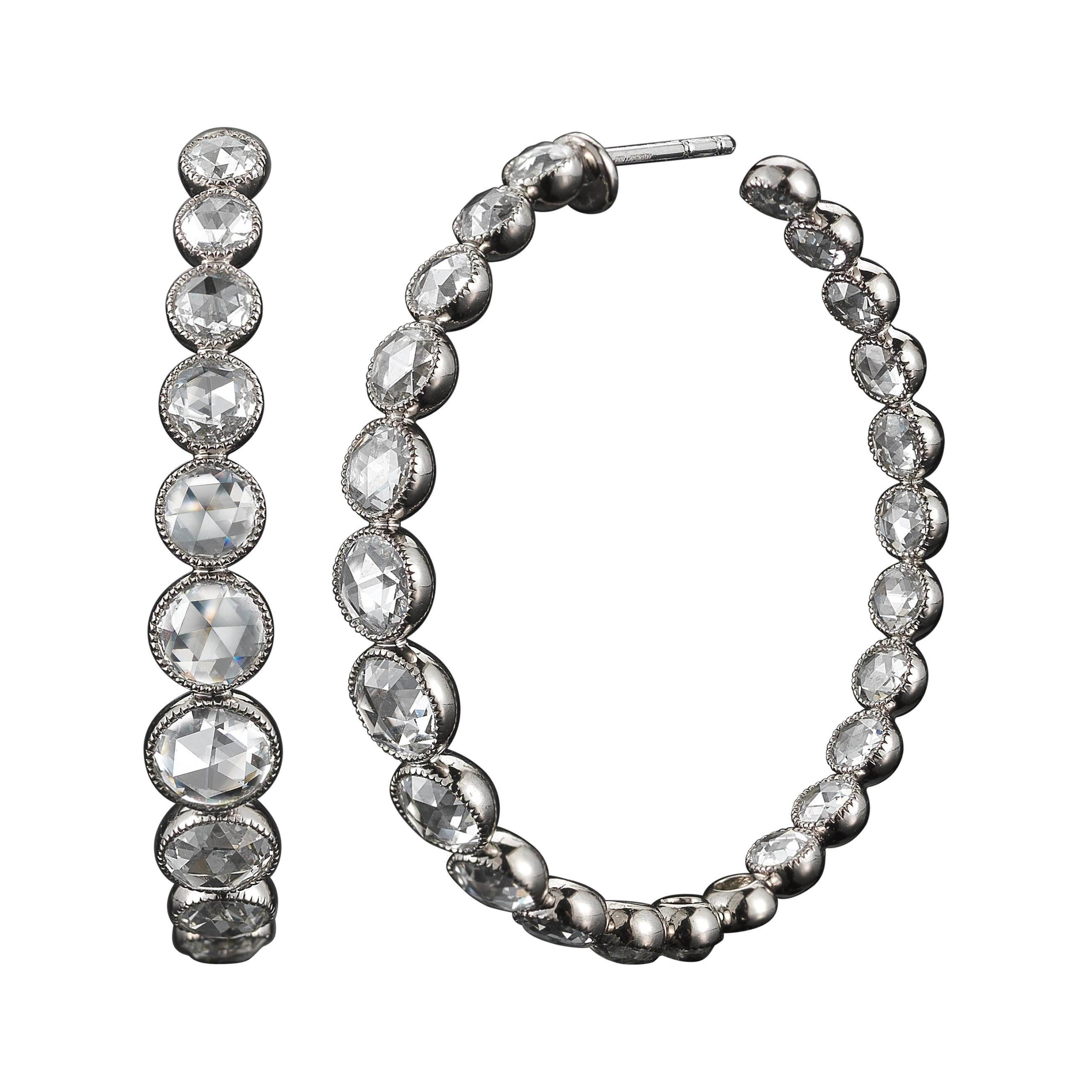 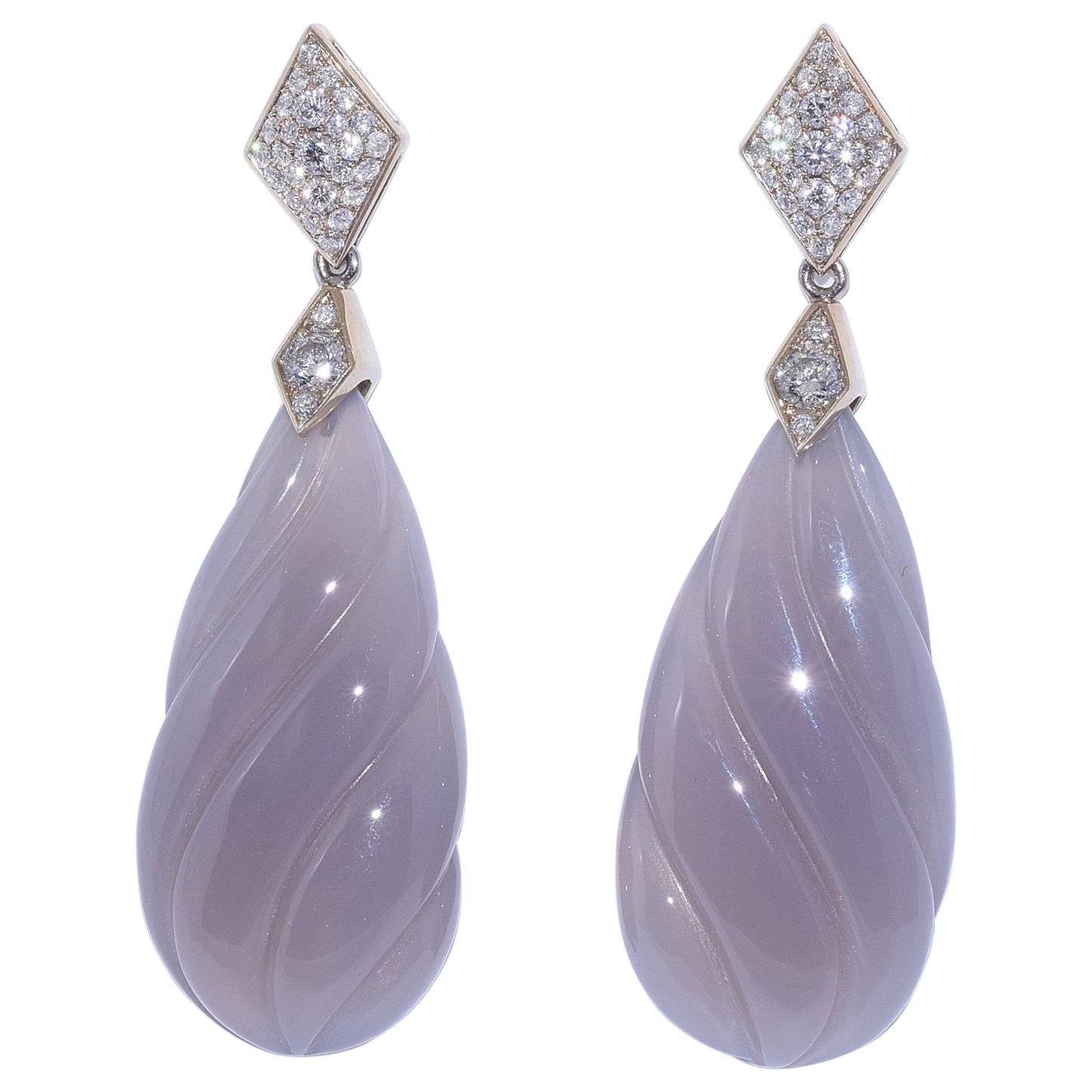 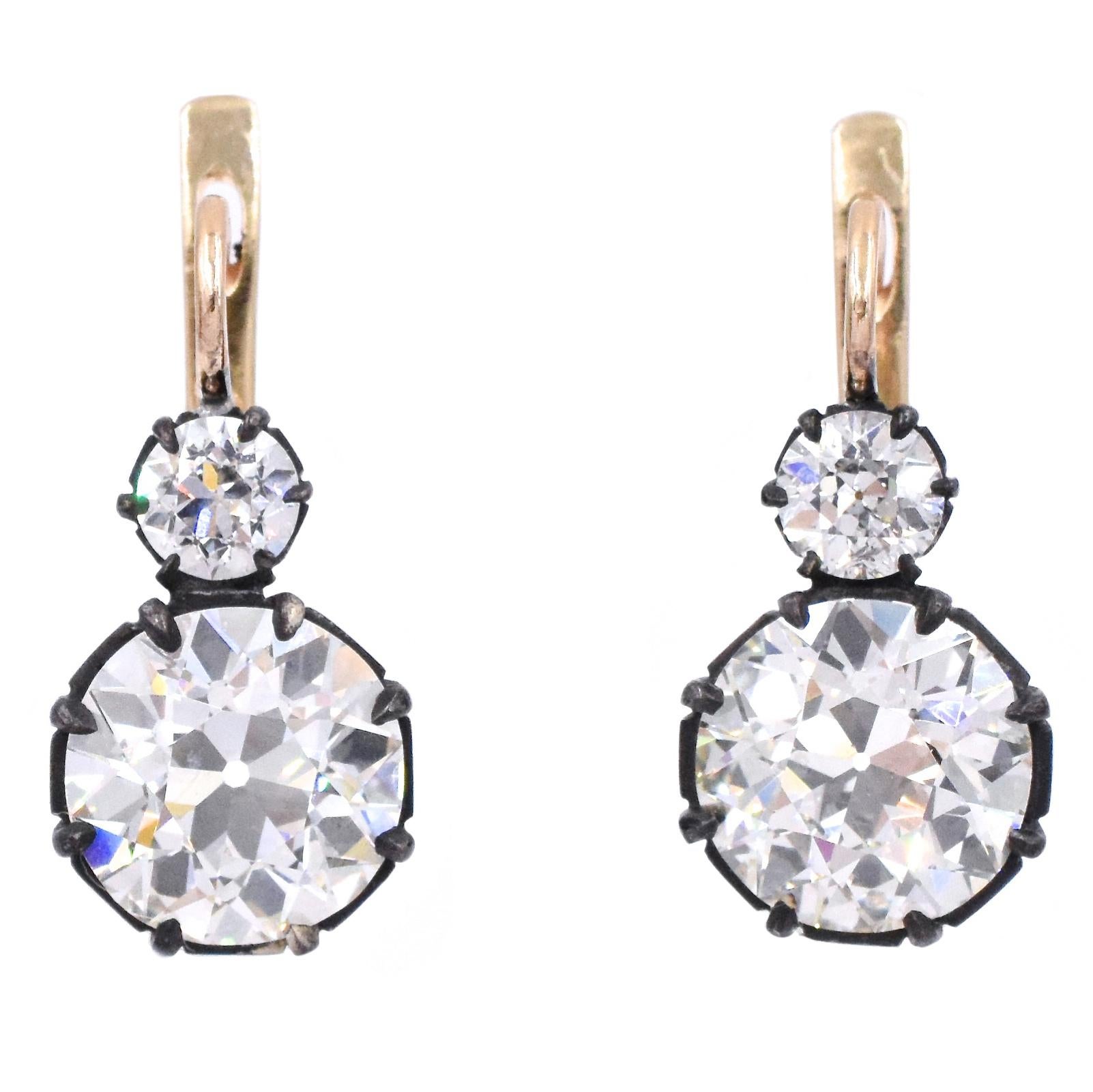 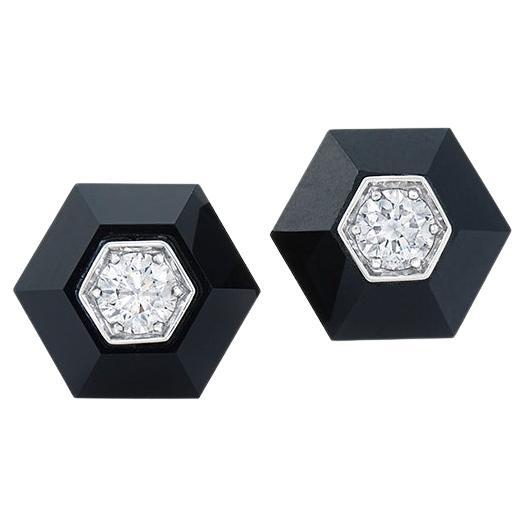 A pair of old mine cushion diamonds weighing 3.76 carats of M color and VS2 clarity and 4.10 carats of K color and VS2 clarity, each with gemological report, are suspended from two old mine diamonds weighing a total of approximately 1.20 carats mounted in antique style silver top yellow gold collets by Fred Leighton. The earrings measure 7/8 inch from the top of the top diamond by 1/2 inch wide. 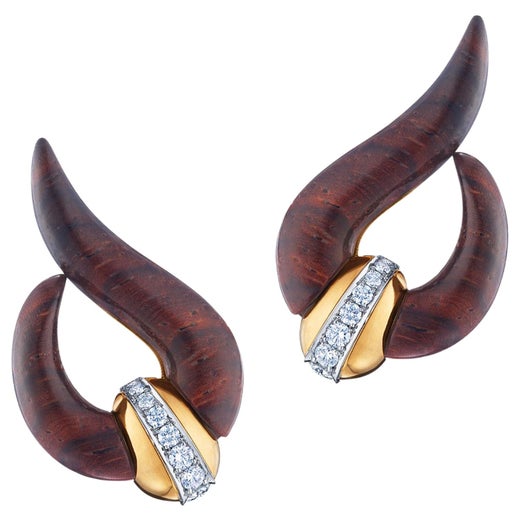 For years, countless style-setters around the world — Hollywood starlets among them — have turned to Madison Avenue mainstay Fred Leighton for its exceptional selection of antique and vintage baubles.

Wrapped around its elegant corner of 66th and Madison Avenue in New York, Leighton is a brilliantly glittering star in the jewelry firmament. Since the boutique moved uptown in 1984, Leighton has become known for bringing antique and 20th-century jewels to a discerning international clientele and, perhaps most famously, for contributing to the red carpet looks of countless starlets (including Meryl Streep, Natalie Portman, Amy Adams and Claire Danes, to name but a few). Simply put, over the past few decades, Leighton has helped move antique jewelry out of its dusty, insular ivory tower and into the wider world of fast-moving modern style.

The story of Fred Leighton as we know it began in the 1970s, when Murray Mondschein (now something of a legend in the jewelry industry) took over a Greenwich Village clothing shop called Fred Leighton (after its original owner) and started selling Mexican wedding dresses, hand-crafted accessories and ethnic jewelry. When someone gave him some antique jewelry to sell, he added that to the mix.

A defining moment came in the mid-1990s: “It started with an unexpected call from Miuccia Prada,” relays Greg Kwiat, the jeweler’s CEO. “She had designed a dress for Nicole Kidman to wear to the Oscars, and she had something very specific in mind for the jewelry that should go with it.” Fred Leighton lent a vintage choker of Australian opals (a reference to Kidman’s nationality) that Prada, a client and collector, had seen in the shop. The timing was perfect, as “vintage” in general — clothes, accessories, jewelry, furniture — was being embraced for its charm, individuality and powers of personal expression. “Estate jewelry pushed against the sameness of modern branded culture,” explains Kwiat.

By the mid-2000s Mondschein (who by then had legally changed his name to Fred Leighton) had retired and an unsettled period of interim ownership followed. In 2009, the Kwiats, world-leading diamond traders and jewelers, bought the business, and Greg Kwiat became CEO. Today, the Madison Avenue boutique presents an air of streamlined serenity: taupe carpet warmed by original Art Deco showcases; furniture in rich, glossy Macassar wood; wrought-iron balustrades that recall a luxurious 1930s ocean liner. The jewelry, set out simply but impeccably, covers a 200-year span of styles and eras, from the candlelit romance of Georgian diamond chandelier earrings, through the pomp and grandeur of Victorian jewels, to the modernism of Art Deco masterpieces and seminal 1960s designs by the likes of Van Cleef & Arpels and David Webb.

Leighton’s particular strengths lie in Victorian pieces from the 1800s and Art Deco pieces. She likes the eclecticism and eccentricity of 19th-century jewelry, embodied, for example, by an enameled serpent bangle, with its gem-encrusted head, a favorite motif of Queen Victoria, or a pair of dramatic gold Egyptian-inspired earrings with scarab motifs that tell of the vogue for archaeological revival jewels during the period.

Today, the antique and 20th-century offerings are joined by a contemporary Fred Leighton-branded collection, whose rings, necklaces and other accessories are either inspired by historical precedents or actually incorporate antique elements, such as a pair of earrings composed of vintage diamond wings with appended enamels and fringes that provide an of-the-moment edge.

About the Seller
5.0
Located in New York, NY
Recognized Seller
These prestigious sellers are industry leaders and represent the highest echelon for item quality and design.
1stDibs seller since 2014
54 sales on 1stDibs
More From This SellerView All
You May Also Like 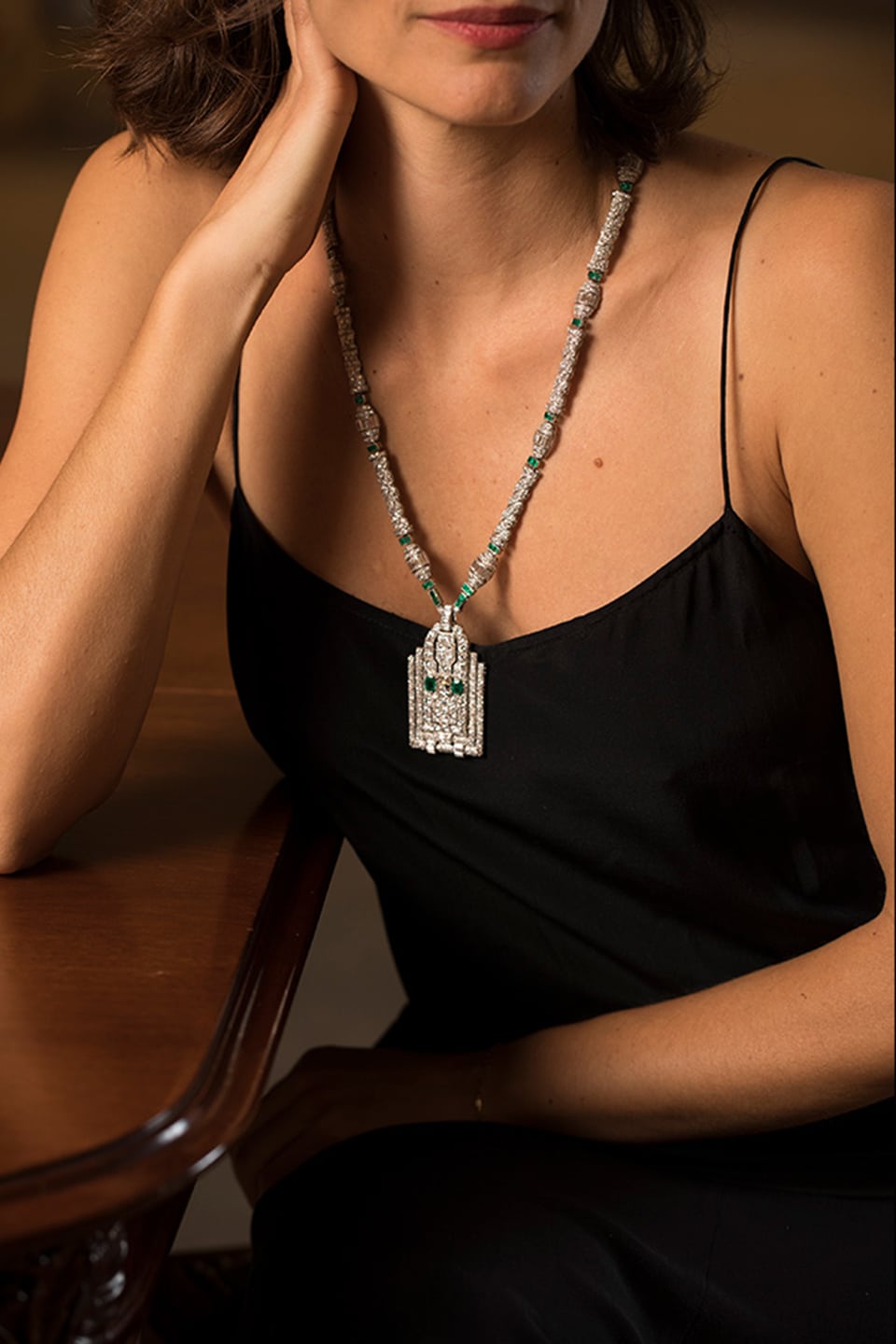