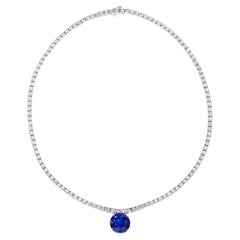 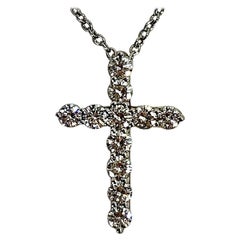 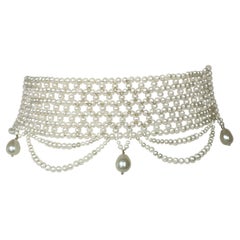 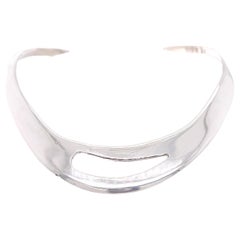 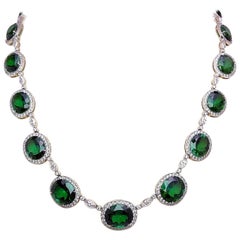 Diamond Tennis Necklace with Removable 12.01 carat Tanzanite Pendant
Located in Brooklyn, NY
If you want to feel like royalty, look no further. This is Elizabeth Taylor worth necklace. You will look like a million dollars in it whether you are wearing denim and a white s...
Category

Free Shipping
Monies Acrylic and White Leather Choker
By Monies Gerda Lynggaard
Located in Virginia Beach, VA
11 elements in ascending sizes are threaded through a white leather strand. . Each piece is faceted, and add a “sparkling effect to the necklace.
Category

7.15 Carat Pear and Rounds Enamel Choker
Located in Dubai, AE
Graduating pear shape diamonds from 0.25 carats to 0.10 carats, in combination with 0.05 carat round diamonds. Navy Blue enamel is used to highlight the pear shapes. This choker is m...
Category

Monies Grey Polyester and Kamagong Choker
By Monies Gerda Lynggaard
Located in Virginia Beach, VA
8 trapezoid shaped polyester in a marble faux finish lay impeccably on the neck. Very light and confortable. Closure is in Kamagong wood with magnetic closure. Signature is on the c...
Category

Polki Choker Necklace With Diamonds And Emeralds - Vintage Intention
Located in NEW DELHI, IN
This Choker sets traditional precious gems in an elegant modern choker. Make a statement at the next gala. Polki is an uncut and unpolished diamond, used in its natural form without...
Category

Ella Gafter Diamond Necklace
By Ella Gafter
Located in New York, NY
The diamond choker necklace features a geometric design of 10.80 carats of princess cut diamonds, surrounded by a pave of round diamonds totaling 15.50 carats. All our diamonds are o...
Category

David Webb Gold and White Enamel Choker Necklace
By David Webb
Located in Palm Beach, FL
This magnificent David Webb 18k hammered finish gold and white enamel necklace is absolutely striking, not only because of it's simple and imaginative design, but because of it's gra...
Category

Judith Leiber 1980s Solar System Symbol Choker
By Judith Leiber
Located in Scottsdale, AZ
The incredible 1980s Judith Leiber choker is sure to be your new favorite! This rare choker is gold plated and features the various symbols for the planets in our solar system. The c...
Category

Vintage German Glass Beads edged with 24K gold on Pearls Cupid Necklace
By Aracheli Studio
Located in Monrovia, CA
White freshwater pearls adorned with 2 vintage German beads that are trimmed with 24K gold. It is finished with 14K gold filled metals. This necklace is 16 inches long and can be ext...
Category

Artist Statement Choker in Raw Malachite 14 kt Yellow Gold F Cocktail Necklace
By Sheila Westera London
Located in Engelberg, CH
‘Doris’... if there is the ultimate marvellous green stone necklace, than this is that jewel! This unbelievable One-of-a-Kind raw stone choker is another Unique jewel from her Conver...
Category

Vintage choker necklaces are elegant, alluring and stylish. Cameos, pearls, diamonds and other stones can decorate these necklaces, which come in single or multiple strands. Whether it is a statement piece or a delicate chain, these short necklaces always stand out and turn heads.

The history of the choker can be traced back thousands of years, with Sumerian examples discovered from 2600–2500 B.C. They endured as a popular form of adornment through the centuries, and during the French Revolution they took on a symbolic significance. Women wore ribbons around their throats to mark the passing of those killed by the guillotine. Soon, the plain ribbons were adorned with small cameos and other ornamentation.

European choker necklaces gained a salacious reputation in the 19th century when prostitutes were associated with black ribbons tied around the neck, such as the model in Édouard Manet’s Olympia (1863). Queen Alexandra, Princess of Wales, reversed the trend in the late 19th century by wearing a large pearl and diamond choker, reputedly to hide a scar.

Fashioned from gold, pearls and other precious stones and metals, chokers continued to be worn into the 20th century, alternately statements of wealth and rebellion. They experienced periods of revival in the 1920s, ’40s, ’70s and ’90s for both men and women.

Vintage chokers make a statement with an unmistakable air of femininity. On 1stDibs, find an alluring collection of vintage chokers today, including gold, sapphire and emerald chokers.