H 9.5 in. Dm 9.5 in.
Antique Papier Mâche Lion Head Basket on Antler Base, 1880
Located in Berghuelen, DE
A very rare antique paper basket. A lion head made of painted papier mâché mounted on a fallow deer antler base, Austria, circa 1880. Paper lable of the manufacturer Rudolf Brix on t...
Category

H 27.56 in. W 12.6 in. D 14.97 in.
Rare 19th Century Native American Hupa/Yurok Dance Cape
Located in Coeur d'Alene, ID
Glass tube dance cape with beaded drops sewn on linen with store string. This was much used but well cared for. A few missing beads but not distracting. Representative of the earlier...
Category

H 38 in. Dm 38 in.
A. Pfisterer, the Fairytale Castle Neuschwanstein, 1896
Located in Berghuelen, DE
A great oil painting depicting castle neuschwanstein. Oil on canvas by A. Pfisterer 1896. Framed with antique richly decorated and gilded frame. Signed on the lower right. Frame with...
Category

A. Pfisterer, the Fairytale Castle Neuschwanstein, 1896

H 9.85 in. W 13.39 in. D 2.37 in.
Danish 19th Century Wooden Folk Art Bible Box "Forget Me Not"
Located in Haddonfield, NJ
Mid-19th century wooden box designed to look like a Bible. Text engraved with monogramme. The four words in the corners are quite cute and charming: Danish: "FOR - GLEM - MIG - EJ"...
Category

H 6.3 in. W 7 in. D 10 in.
19th Century Dummyboard, Folk Art from Sweden
Located in Brecht, BE
Found in Sweden, this lifesize dummy board is a unique and quirky object, contemporary art to me.
Category

H 6.89 in. W 11.82 in. D 6.5 in.
Antique 19th Century Folk Art Bird Hunting Tool and Decoy
Located in Houston, TX
19th century French bird hunter's tool and decoy. This item was placed in the ground and wound up. The hunter would pull a string causing the head of the tool to rotate. With the ref...
Category

H 19 in. W 9.5 in. D 5 in.
Collection of Six 19th Century Folk Art Oil on Board Boxing Fighting Scenes
Located in Lowestoft, GB
A wonderful naive collection of six fighting scenes, with baker boys and chimney sweeps. The six spilt up into two tryptic's one showing a fight in a ring that's abruptly slowed ...
Category

H 14 in. W 34.5 in. D 0.5 in.
19th Century Folk Art Mischievous Punch and Disgruntled Pooch Oil on Tin Box
Located in Lowestoft, GB
Unusual oil on tin of a mischievous looking punch with a disgruntled pooch, mid-19th century in age English in origin. The tin lid, where the painting is has two simple hinges (both ...
Category

H 2.37 in. W 8.27 in. D 5.32 in.
19th Century Folk Art Oil Painting of a Girl Holding Wheat
Located in Los Angeles, CA
This fine Folk Art painting of a girl holding wheat in a field painted on board. It is unsigned and on board newly framed. The condition is very good.
Category

H 10.5 in. W 4 in. D 1.5 in.
19th Century Folk Art Carved Spanish Love Bird Figure
Located in London, GB
A handmade late 19th century Folk Art carved wooden love bird, with original paint still visible across sections of this item. The bird would like have been placed with the confines ...
Category

H 4.73 in. Dm 2.76 in.
Folk Art Candelabrum
Located in Seattle, WA
Handmade Folk Art candelabrum. That was originally used as a home altar. Lovely with candles burning or just as a piece of sculpture.
Category

H 9 in. Dm 14 in.
Early 19th Century Folk Art Hand-Carved Gentleman Sculpture
Located in Los Angeles, CA
This folky gentleman looks like a soldier or a officer of the military. The carving is quite good and he is mounted on a custom iron Stand. The patina is the best with minor chips fr...
Category

H 14 in. W 7 in. D 5 in.
Swedish Early 19th Century Folk Art Washboard in Pine, circa 1830
Located in Haddonfield, NJ
A Swedish washboard in pine dated 1830 with owner initials "P K". The farmers and country-side folks were proud of the few things they owned and used to carve their initials and to d...
Category

H 79 in. W 44 in. D 30.5 in.
Oval Folk Art Basket Centerpiece
Located in Wilson, NC
Oval Folk Art basket centerpiece, the rim consisting of bent bamboo semi circles attached to the oval basket of individual slices of wood held together inside with a ring of bamboo, ...
Category

H 17 in. W 53 in. D 10 in.
19th Century Painted Dress Model or Doll
Located in Troy, NY
Beautiful example of a dress model with a sweet, expressive face. The slightly distressed paint adds to its charm. Our pieces are left in lived-in condition, pending our custom cons...
Category

How Much is a 19 Th Century Folk Art?

Why the American Flag Has Had So Many Different Star Configurations 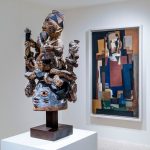