Hermes Birkin Tricolor Special Order Horseshoe Birkin 30CM
By Hermès
Located in Geneva, CH
This is a Hermès Birkin HSS 30 CM bag that has been especially made to the specifications of a client. Collection: 2013 Leather: Togo Color: Hermès Pink Bougainvillea, Hermè...
Category 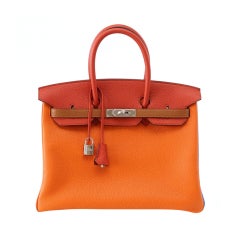 Hermes Special Order Bi-Colour 30cm Birkin Bag
By Hermès
Located in London, GB
Adding a twist to the traditional Hermès Birkin, this bi-colour bag was specially made to order and showcases a bold black togo leather exterior, which is offset by contrasting brigh...
Category

Size: 30 cm
Hermes Blue Hydra/Jaune d'Or Clemence Leather Special Order Birkin 35 Bag
By Hermès
Located in Dubai, Al Qouz 2
A bag that has become a hallmark of luxury and class, the Birkin from Hermes is one of the most coveted bags in the world. Custom-made on the suggestions of Jane Birkin, hence the na...
Category

Birkin Special For Sale on 1stDibs

On 1stDibs, you can find the most appropriate vintage or contemporary birkin special for your needs in our varied inventory. Many people prefer Blue, but fashion is all about individuality — you can find Black, Purple and more options on these pages. When shopping for these accessories, you’ll find that there are less available pieces for men or unisex today than there are for women.

How Much is a Birkin Special?