1980 This Cartier Art Deco Blue Enamel Table Clock
By Cartier
Located in Weiningen, CH
1980 this Cartier blue enamel Art Deco table clock. In full working condition with batteries. Some damage on the back side.
Category

W 3.25 in. L 2.5 in.
Cartier Antique "50 Years of Friendship"18ct Gold and Blue Enamel Pocket Watch
By Cartier
Located in London, GB
A delightful gold pocket watch by Cartier c.1920 the round watch case in highly polished 18ct yellow gold decorated with an outer frame of rich royal blue enamel and centred with a p...
Category

W 1.29 in. L 0.86 in.
Cartier Rare Blue Enamel Gold Bangle Bracelet
By Cartier
Located in Miami, FL
About the Item: A decadent design from a world renowned brand- the Cartier 18K Yellow Gold Blue Enamel Bangle Bracelet. The bracelet is made of 18K yellow gold and is accented with ...
Category 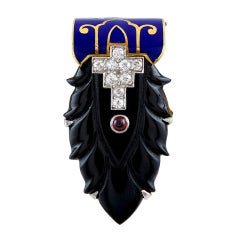 W 0.87 in.
Cartier Enamel and Sapphire Bee Brooch
By Cartier
Located in New York, NY
A Late - 20th Century 18 karat gold and enamel bee brooch with a round cabochon sapphire with an approximate total weight of .10 carat. by Cartier. Circa 1990. Signed, Cartier #04479.
Category

Cartier Yellow Gold A One of a Kind Santos 1960s Blue Enamel and Wristwatch
By Cartier
Located in New York, NY
This exquisite 1960's wristwatch is a special order made by Cartier for a unique and famous collector. The watch is inspired by the iconic Santos model first made by Louis Carti...
Category

Get Updated with New Arrivals
Save "Cartier Blue Enamel", and we’ll notify you when there are new listings in this category.

Find the exact cartier blue enamel you’re shopping for in the variety available on 1stDibs. Frequently made of Gold, 18k Gold and Yellow Gold, this item was constructed with great care. In our selection of items, you can find a vintage example as well as a contemporary version. You’re likely to find the perfect cartier blue enamel among the distinctive items we have available, which includes versions made as long ago as the 19th Century as well as those produced as recently as the 21st Century. Creating a cartier blue enamel has been a part of the legacy of many jewelers, but those produced by Cartier are consistently popular. A cartier blue enamel can make for a versatile accessory, but a selection from our variety of 8 Blue Sapphire versions can add an especially stylish touch. Today, if you’re looking for a round cut version of this piece and are unable to find the perfect match, our selection also includes uncut alternatives. When shopping for a cartier blue enamel, you’ll find that there are less available pieces for unisex or men today than there are for women.

How Much is a Cartier Blue Enamel?