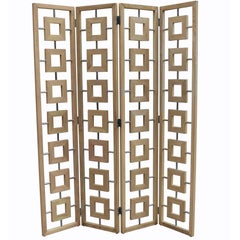 H 35 in. W 59 in. D .75 in.
Vintage Neo-Classic Style Painted Pastoral Scene Four Panel Folding Screen
Located in New York, NY
2 Vintage Italian neo-classic style four-paneled folding screens painted with an idyllic scene of women on either side of a river playing music, bathing and eating, a tower on a brid...
Category

H 84 in. W 64 in. D 1.25 in.
Original Queen Victoria Decoupage Four Panel Folding Screen Totally Original
Located in GB
We are delighted to offer for sale this very decorative handmade Victorian four panel Decoupage folding screen A highly decorative piece of Victoriana, these were in every great t...
Category

H 72.45 in. W 73.63 in. D 1.38 in.
Four Panel Painted Folding Screen
Located in Woodbury, CT
A WOOD FRAMED 4 PANEL SCREEN, PAINTED ON CANVAS WITH BIRDS AND FLOWERS. IN A BLIND AND OPEN FRETWORK SCREEN WITH CARVED LOWER PANELS. THE HINGES ARE 2 WAY. THE BACK NOW COVERED WIT...
Category

H 64.57 in. W 58.27 in. D 1.19 in.
Rare Stunning 19th-20th Century Romantic Decoupage Four-Panel Folding Screen
Located in GB
We are delighted to offer for sale this very decorative hand made Victorian to Edwardian four-panel Decoupage folding screen A highly decorative piece of Victoriana, these were in...
Category

H 72.25 in. W 64 in. D 6 in.
19th Century Victorian Folding Four-Panel Room Divider, circa 1890
Located in Royal Tunbridge Wells, Kent
The art of cutting paper to decorate objects and furniture has its origins dating back hundreds if not thousands of years. However there was a revival for ths great art in the Victor...
Category

H 58.27 in. W 83.47 in. D 1.19 in.
Vintage Neo-Classic Style Painted Pastoral Scene Four Panel Folding Screen
Located in New York, NY
2 Vintage Italian neo-classic style four-paneled folding screens painted with an idyllic scene of women on either side of a river playing music, bathing and eating, a tower on a brid...
Category

H 78 in. W 76 in. D 1 in.
19th Century Italian Oil Painting on Four Panel Folding Screen
Located in La Plata, MD
Late 19th century Italian screen with a gorgeous oil painting of floral scene. The oil paint colors are vibrant and in good condition. The frame is made of canvas over a wooden frame...
Category

H 47.5 in. W 47.5 in. D 0.8 in.
A Mirrored Four Panel Folding Screen
Located in Palm Desert, CA
A 4 panel mirrored screen with a beveled Chevron pattern and black painted back
Category

H 72.5 in. W 72 in. D 2.5 in.
Piero Fornasetti Four-Panel Folding Screen
By Fornasetti
Located in New York, NY
PIERO FORNASETTI (1913-1988) Four-panel folding screen with transferred lithograph decoration on lacquered wood. One side depicts a classical ruin with cloudy skies and the other fe...
Category

H 71.5 in. W 72 in. D 1 in.
A Four-Panel Folding Screen designed by Piero Fornasetti
Located in Palm Desert, CA
This four-panel screen depicts a collector's bookcase on one side and a faux bois design with various items "pinned" to it on the other. All hardware is original. This screen has ne...
Category

H 53.75 in. W 55.5 in. D 1.25 in.
Antique Japanese Four-Panel Folding Screen with Hand-Painted Cranes
Located in New York, NY
These two-panel Japanese antique folding screens can come together to form a longer four-panel room divider. One side is delicately hand-painted with cranes over a gold-leaf backgrou...
Category

H 69 in. W 25 in. D 1 in.
Red Japanese Lacquer Four-Panels Folding Screen, Meiji Period, 1868-1912
Located in Saint-Ouen, FR
Red Japanese lacquer four panels folding screen "{yonkyoku byobu}". The panels are decorated with gold highlights. On the front of each of them, a three-parts composition is made ...
Category

H 84 in. W 72 in. D 1 in.
Four Panel 1970s Hand painted Folding Screen
Located in Pasadena, CA
Four panel folding screen with hand painted imagery on both sides from the 1970's. Wonderful freehand painted graphic of a winters day while polar bears play on one side and an ...
Category

H 84 in. W 96 in. D 1 in.
20th Century Four-Panel Chinoiserie Gilt Painted Folding Screen
Located in New York, NY
A remarkable 20th century chinoiserie four-panel folding screen. On one side the panels are decorated with an idyllic landscape with figures, all rendered in hand-applied gilt. The o...
Category

For more than four decades, Peter Kraus, of Ursus Books, has delighted connoisseurs with illustrated volumes from history's most creative talents.

From luxe drapes in sumptuous hues to airy shades crafted from natural bamboo, window treatments have become a hot topic on which a few of our most inventive interior designers shed some light.