H 40.5 in. W 66 in. D 20 in.
Early 20th Century French Style Console Table
Located in New York, NY
This antique low console table was hand-crafted in the early 20th century. It is comprised of a white marble top and a carved, giltwood base. We particularly love the details of the ...
Category

H 27.75 in. W 44 in. D 18 in.
Carved Giltwood Marble Top French Style Console Table
Located in Kennesaw, GA
This is a wonderfully carved giltwood console table with rouge marble top. It mounts to the wall and the marble is not attached. It is from the later part of the 20th century.
Category

H 31 in. W 42.5 in. D 21.25 in.
Stone and Brass French Style Console
By Maitland Smith
Located in Palm Desert, CA
This is a French style console table with a tessellated stone top is attributed to Maitland Smith. The top includes brass trim above and below a Greek key motif. The four metal legs ...
Category 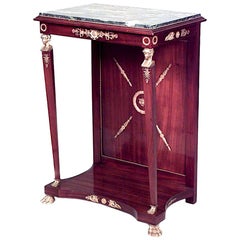 H 31.5 in. W 32 in. D 21 in.
French Empire-Style Marble-Top Console Table
Located in Vancouver, British Columbia
A vintage French Empire-style mahogany console, the two simple columns with brass capitals and bases and raised on a plinth base, the simple geometric top with gilt mounts and a marb...
Category

H 28.5 in. W 51 in. D 25 in.
French Deco Style Console
Located in Washington, DC
Designer unknown, but clearly an idiosyncratic, almost Folk Art, riff on 1930s deco. Bought in the South of France. Originally one of a pair, which had unpolished pink granite tops (...
Category

H 34 in. W 36.5 in. D 18.5 in.
Antique French Rococo Style Solid Brass Console Table
Located in London, GB
An absolutely gorgeous vintage rococo revival console table in solid brass. this was made in France, it dates from around the 1970’s. The quality is exceptional, this is extremely...
Category

H 36 in. W 27 in. D 16 in.
Directoire Style Console Tables
Located in Austin, TX
Pair of consoles from France in the Directoire style. Each is topped with a “Brêche Royal” marble top; intact and original. Each table features four square tapered legs with a bottom...
Category

H 32.5 in. W 45.75 in. D 19.75 in.
19th Century French Rococo Style White Console Table
Located in New York, NY
A French 19th century console table after the Rococo style with a purple marble top. The base is painted in white with gilt accents and stands on curved legs atop a marble piece. The...
Category

H 39.25 in. W 68.5 in. D 15.75 in.
Directoire Style 3 Drawer Console Table in French Cherry, 100% Made in France
Located in Landivy, FR
This Console table is a handmade reproduction of the French Directoire Style at the end of the 18th century. This period style is remarkable with its straight, classical and timel...
Category

How Much are French Style Console Tables?

French style console tables can differ in price owing to various characteristics — the average selling price at 1stDibs is $4,500, while the lowest priced sells for $1 and the highest can go for as much as $285,000.