H 58.47 in. W 16.15 in. D 16.15 in.
Organic Folk Art Jardiniere Plant Stand with Real Branches and Twigs
Located in Lisse, NL
Stunning Early 1900 Handmade Folk Art Jardiniere. This antique, one piece plant stand is a fine example of the craftsmanship and the wonderful designs of bygone times. Where else th...
Category

H 35.5 in. Dm 12 in.
Unique Antique Gothic Revival Carved Oak Jardinière Plant Stand with Zinc Liner
Located in Lisse, NL
Early 1900s, hand carved planter with hand forged decorations and the original zinc liner. If you like rare and stylish antiques then you will love this handcrafted, decagonal Gothi...
Category

H 12 in. Dm 13 in.
Large Arts & Crafts Hand-Crafted Oak Jardiniere / Plant Stand with Copper Bands
Located in Lisse, NL
Handcrafted antique jardinière. This early 20th century stand is a fine example of the craftsmanship and the wonderful designs of the Arts and Crafts movement. This rectangular desi...
Category

H 28 in. W 24 in. D 14 in.
Antique Chinese Style Chinoiserie Plant Stand Jardinière
Located in London, GB
An exquisitely beautiful chinoiserie plant stand, in the antique Chinese style, which I would date from around the 1950’s period. It is beautifully made and of excellent quality, ...
Category

H 35 in. W 27.25 in. D 22 in.
Pair of circa 1920 Burmese Carved Wood Jardinière Plant Pedestal Stands Lions
Located in GB
We are delighted to offer for sale this lovely pair of original Burmese hand carved wood plant Jardinière stands with lion bird and floral detailing A very good looking and decora...
Category

H 43 in. W 16 in. D 16 in.
Regency Style Plant Stand
Located in Wilson, NC
This plant stand has a leather top secured by a brass studded edge. Brass chain garland swags are suspended by lion's head ring ornaments. The center shelf has a molded edge and a br...
Category

H 55 in. W 1.5 in. D 12.5 in.
Jean Royère, Plant Stand
By Jean Royère
Located in San Francisco, CA
A plant stand made of iron, with three spots for planters.
Category

H 25 in. W 32 in. D 8.5 in.
Antique Jardiniere Stand, Japanese, Bronze, Plant, Side Table, Edo Period, 1850
Located in Hele, Devon, GB
This is an antique jardiniere stand. A Japanese, bronze planter stand or side table, dating to the Edo period, circa 1850. Wonderfully ornate jardiniere stand with strong antique ...
Category

H 34.06 in. Dm 16.54 in.
Iron Champagne or Plant Stand
Located in Houston, TX
This stand was originally used as a champagne stand but now we are seeing it as a plant stand. Made in cast iron this piece has an aged white patina that continues to become more gor...
Category

H 24 in. Dm 15.5 in.
Painted Wire Victorian Plant Stand
Located in Wiscasset, ME
Late 19th century painted in pale yellow and of a nice proportion.
Category

H 60 in. W 41 in. D 21 in.
Pair of Neoclassical Plant Stands
Located in Swan Point, MD
Pair of Neoclassical plant stands. Three foot female effigy applied with an accent base. The top copper bowls are removable. Thy main post is a turned column with acanthus detail. ...
Category

H 37.75 in. W 17 in. D 17 in.
Neoclassical Style Cast Iron Plant Stand
Located in Norwalk, CT
Great patina on this cast iron plant stand --aged red and silver paint along with the neoclassical motif of crossed arrows. The well at the top of the stand has a 8.5" diameter.
Category

H 25 in. Dm 18.75 in.
c.1940 English Painted Wood Plant Stand
Located in Chicago, IL
This great painted English plant stand was found near County Staffordshire in the rolling countryside. having two levels this great stand has a multitude of uses, it does make a grea...
Category

H 39.25 in. W 39.5 in. D 8.5 in.
Monumental Scrolled Granada Style Iron Plant Stand
By Arthur Umanoff
Located in Garnerville, NY
A very large iron scroll work plant stand. Circa 1960-70. Nine scroll work shelves for various sized potted plants. The base is optional for use to easily turn the stand for watering...
Category

H 14 in. W 12 in. D 13.5 in.
Vintage Modern Salterini Wrought Iron Plant Stand
By Salterini
Located in Esperance, NY
For sale is this gorgeous Salterini plant stand. The stand is an unusual large size, usually found in much smaller sizes.
Category

H 36 in. Dm 18.5 in.
Antique Wicker Plant Stand, 1920s
Located in Miami Beach, FL
This lovely tightly woven wicker plant stand has an openwork pattern on the sides and an open lattice stretcher beneath which widens on each side to hold a potted plant or perhaps a ...
Category

H 32 in. W 23 in. D 15 in.
Vintage Rattan Bamboo Plant Stand Shelf Console Table
Located in West Palm Beach, FL
Lovely vintage rattan and bamboo plant stand, shelf, console table. This can be used for so many things! It can hold plants on either shelf, it can hold rolled up towels for a beach ...
Category

H 32.5 in. W 34 in. D 14 in.
French Art Nouveau Faux-Rope Wire Plant Stand
Located in Rio Vista, CA
Sculptural French art nouveau plant stand constructed from iron with a faux-rope twisted wire top. The stand has a lower shelf with decorative circles and spandrels on each side endi...
Category

H 38 in. W 50 in. D 18 in.
Pair of Midcentury Chromed Plant Stands, 1960s, Czechoslovakia
Located in Prague 8, CZ
Plated structure and plastic trays. On one Stand one bowl is partially damaged but fully functional – see photos. Overall the stands are in good Vintage condition as well as chrome t...
Category

H 21 in. W 24 in. D 10 in.
Nexum Optical 60 Gold Plant Stand
By Inthegarden
Located in Milan, IT
Part of the captivating collection inspired by Optical Art movement of the 1960s, this sophisticated cylindrical steel plant holder is crafted using the innovative technique of woven...
Category

H 35.83 in. W 17.33 in. D 17.33 in.
Nexum Optical 80 Gold Plant Stand
By Inthegarden
Located in Milan, IT
Striking in any room, this fascinating cylindrical plant holder has an exclusive, hand-made Splot covering distinguished by interwoven pattern of gold champagne and natural finished ...
Category

H 43.71 in. W 17.33 in. D 17.33 in.
Nexum Optical 60 Black Plant Stand
By Inthegarden
Located in Milan, IT
This sublime plant holder was designed to stand out in any decor. The black-painted iron structure (H 60cm) supports a cylindrical steel pot fashioned using a unique material patente...
Category

How Much is a Jardiniere Plant Stand? 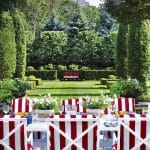