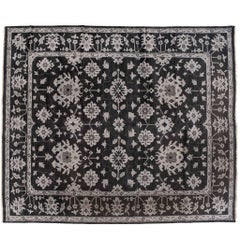 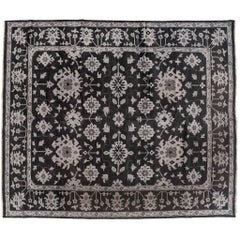 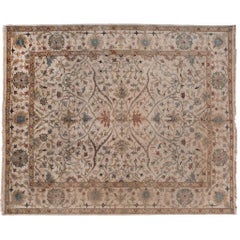 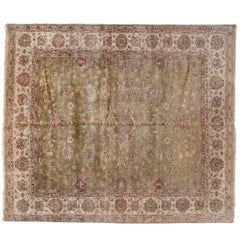 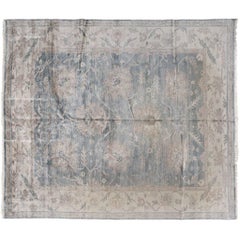 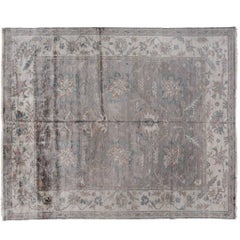 W 106 in. L 143 in.
Get Updated with New Arrivals
Save "Oushak Rugs", and we’ll notify you when there are new listings in this category.

Oushak Rugs For Sale on 1stDibs

An assortment of oushak rugs is available at 1stDibs. The range of distinct oushak rugs — often made from fabric, wool and cotton — can elevate any home. There are 6601 antique and vintage oushak rugs for sale at 1stDibs, while we also have 1792 modern editions to choose from as well. Oushak rugs have been made for many years, and versions that date back to the 18th Century alongside those produced as recently as the 21st Century. Oushak rugs are generally popular furniture pieces, but Modern, Mid-Century Modern and Arts and Crafts styles are often sought at 1stDibs. Nazmiyal Collection, Keivan Woven Arts and Mehraban Rugs each produced beautiful oushak rugs that are worth considering.

How Much are Oushak Rugs?

Oushak rugs can differ in price owing to various characteristics — the average selling price at 1stDibs is $4,795, while the lowest priced sells for $79 and the highest can go for as much as $1,000,000.

On the Origins of Asia

Modshop furniture is available for sale on 1stDibs. These distinctive items are frequently made of metal and are designed with extraordinary care. There are many options in our Modshop collection of furniture, although brown editions of this piece are particularly popular. There are currently 0 vintage editions of these items in stock, while there are also 148 modern editions to choose from. Many of the original furniture by Modshop were created in the mid-century modern style in asia during the 21st century and contemporary. If you’re looking for additional options, many customers also consider furniture by and . The prices for Modshop furniture can vary depending upon size, time period and other attributes. 1stDibs's price starts at US$295 and tops out at US$5,295, while pieces like these can sell for US$2,295.

Furniture by Berber tribes of Morocco is available for sale on 1stDibs. These distinctive items are frequently made of fabric and are designed with extraordinary care. There are many options in our Berber Tribes of Morocco furniture collection, although brown editions of this piece are particularly popular. 757 vintage editions of these items are in stock, while there are 140 modern editions to choose from as well. Many original furniture from the Berber tribes of Morocco were created in the mid-century modern style in Africa during the 20th century. If you’re looking for additional options, many customers also consider furniture by and . Prices for furniture from the Berber tribes of Morocco can vary depending upon size, time period and other attributes. 1stDibs's price starts at US$95 and tops out at US$38,999, while pieces like these can sell for US$3,999 on average.

Finding the Right Turkish Rugs for You

Antique, new and vintage Turkish rugs, with their ruby reds and misted blues, their entwined botanical designs and rhythmic geometries, are as beloved today as they were in the 13th century, when the Turks of the Seljuk Empire began weaving these vibrant carpets in Anatolia.

A Turkish rug is simply one made in Turkey or the former Ottoman empire, employing the region’s unique traditional methods and weaves. Varieties range from flat-woven kilims to lush knotted rugs, known as hali, many of which are created with Ghiordes, or Turkish, knots. Whereas in other knots, the weft (crosswise) yarn is wrapped around one warp (lengthwise) yarn, in Ghiordes knots, it is wrapped around two, imparting lushness and durability. In addition to knotting techniques, Turkish rugs differ in their motifs — naturalistic or stylized, geometric or figurative — which often reflect the region where they were made.

The main types of Turkish rugs, as Milan-based carpet dealer Alfredo Levi explains it, are kilim, typified by a plain slit-tapestry weave, which leaves a gap, or slit, between sections woven with different yarns in different colors; sumak, made with weft wrapping, for a sturdier flat-woven carpet; and cicim, which he describes as “a type of sumak with extra brocade techniques typical of the tribes and villages of central Anatolia. Within each type, there are various regional styles. Among these are Bergama carpets, characterized by bright reds and strong medallions; thick-piled Tulu rugs; and Konya rugs, which Marco Polo is said to have called “the most beautiful in the world.” With their strong tribal motifs and hot-red wefts of especially luxurious wool, Konya carpets are especially prized by collectors.

Also treasured are Oushak (or Ushak) rugs, with their complex, intricate designs and warm earth tones of saffron, cinnamon, blue, ivory and gold; and Hereke carpets, originally created exclusively for Ottoman sultans, using the finest silk. For Jason Nazmiyal, of New York carpet dealer Nazmiyal Antique Rugs, “a good Turkish rug is when the colors are harmonious.” This is true of both modern and antique Turkish rugs, but the hues have changed over the centuries, thanks to both technology and changes in culture and taste.

Patterns, too, have evolved. Although many weavers continue to produce traditional designs, others reinterpret their cultural heritage in contemporary terms, with bolder ornamentation and more geometric motifs. Contemporary Turkish rugs also are seldom made by hand and often incorporate synthetics into the weave, for cost-effectiveness and a durability suited to 21st-century life.

Find antique, new and vintage Turkish rugs for your home on 1stDibs. At The Study, read about how to take care of your antique or vintage rug as well as how to choose the right rug for your space.