H 13.98 in. Dm 7.88 in.
Poul Henningsen for Louis Poulsen PH3.5/2.5 Copper Table Lamp
By Louis Poulsen, Poul Henningsen
Located in Vancouver, BC
The PH 3½-2½ copper table lamp was designed in 1928 by Poul Henningsen. The copper is polished and not lacquered, and will develop a unique patina over time, dependent on its environ...
Category 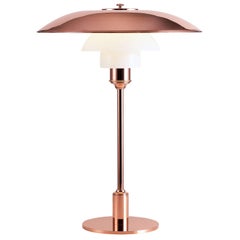 H 51.2 in. Dm 13 in.
Purple PH5 Lamp
By Louis Poulsen, Poul Henningsen
Located in Berkeley, CA
Designed in 1958 by Poul Henningsen for Louis Poulsen, this revolutionary PH5 lamp was designed with the home in mind. The purple and white banding diffuses light for a soft, warm to...
Category

H 10 in. Dm 21 in.
PH "The American Lamp"
By Poul Henningsen
Located in Copenhagen, DK
Swivel desk lamp, model 'The American lamp.' The lamp is made of browned brass. This model, which is rare to find in this condition, is made with the long arm. Produced by Louis P...
Category

H 13 in. W 11.42 in. D 24.41 in.
Poul Henningsen PH5 Desk Lamp
By Poul Henningsen
Located in Madrid, ES
A desk lamp designed by Poul Henningsen and edited by Louis Poulson in 1960. Three brass supports on a brass base and white painted metal shades. Bleu inner ring and red top.
Category 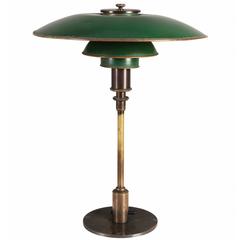 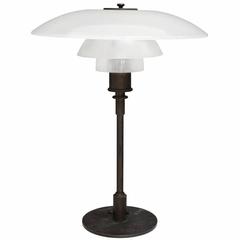 H 17.7 in. Dm 13 in.
Louis Poulsen PH 3½-2½ Color Table Lamp by Poul Henningsen
By Louis Poulsen, Poul Henningsen
Located in Weston, FL
Poul Henningsen was born in Copenhagen by the famous Danish actress Agnes Henningsen. He never graduated as an architect, but studied at The Technical School at Frederiksberg, Denmar...
Category

H 21.7 in. Dm 17.7 in.
Poul Henningsen PH 5 Table Lamps for Louis Poulsen, Denmark 1970s
By Poul Henningsen
Located in New York, NY
Unlike the Classic PH 3/4 table lamps this pair of lamps are supported by three vertical support rods rather than one. The shades are enameled aluminum and the support rods are brass...
Category

H 14 in. Dm 7.9 in.
Louis Poulsen PH 4/3 Table Lamp in Matte White by Poul Henningsen
By Louis Poulsen, Poul Henningsen
Located in Weston, FL
The fixture is designed based on the principle of a reflective three-shade system, which directs the majority of the light downwards. The shades are made of metal and painted white t...
Category

H 21.6 in. Dm 17.7 in.
Louis Poulsen PH 4½-3½ Glass Floor Lamp in Chrome by Poul Henningsen
By Louis Poulsen, Poul Henningsen
Located in Weston, FL
The fixture is designed based on the principle of a reflective three-shade system, which directs the majority of the light downwards. The shades are made of handblown opal three-laye...
Category

H 49.2 in. Dm 17.7 in.
Louis Poulsen PH 4½-3½ Glass Table Lamp in Chrome by Poul Henningsen
By Louis Poulsen, Poul Henningsen
Located in Weston, FL
The fixture is designed based on the principle of a reflective three-shade system, which directs the majority of the light downwards. The shades are made of hand blown opal three-lay...
Category

H 21.7 in. Dm 17.7 in.
Louis Poulsen PH 3-2½ Bollard Outdoor Lamp in Black by Poul Henningsen
By Louis Poulsen, Poul Henningsen
Located in Weston, FL
The fixture is designed based on the principle of a reflective three-shade system, which directs the majority of the light downwards. The shades have a matte white painted interior s...
Category

Ph2 Lamp For Sale on 1stDibs

At 1stDibs, there are many versions of the ideal ph2 lamp for your home. Each ph2 lamp for sale was constructed with extraordinary care, often using metal, glass and brass. Find 75 options for an antique or vintage ph2 lamp now, or shop our selection of 45 modern versions for a more contemporary example of this long-cherished piece. Your living room may not be complete without a ph2 lamp — find older editions for sale from the 20th Century and newer versions made as recently as the 21st Century. Each ph2 lamp bearing Scandinavian Modern, Mid-Century Modern or Modern hallmarks is very popular.