H 31.49 in. W 47.24 in. D 11.81 in.
Ebony Wood Rectangular Console
By Arcahorn Srl.
Located in Milan, IT
This Minimalist console in Macassar ebony wood displays high craftsmanship in all its details. Handcrafted by skilled artisans, this unique piece uses a combination of rich wood and ...
Category

H 33.47 in. W 63 in. D 17.33 in.
Blunt Tall Rectangular Console
By Bodema
Located in Milan, IT
The standout feature of the Blunt collection is the exclusive, seamless design that is the expression of an extreme attention to detail and masterful craftsmanship, in a design chara...
Category

H 32 in. W 62 in. D 12 in.
Black Lacquered Elmwood Rectangular Console China Export
Located in Brescia, IT
This is a chinese black lacquered console or side table of contemporary production. His black color makes this piece a modern element for an eclectic ambience. A timeless presence. ...
Category

H 30.71 in. W 30.32 in. D 14.57 in.
Louis XIV style carved giltwood rectangular console table
Located in London, GB
This Belle Epoque table takes inspiration from the very beginning of the French Golden Age of furniture making in the 18th Century, in the period during the rule of King Louis XIV. F...
Category 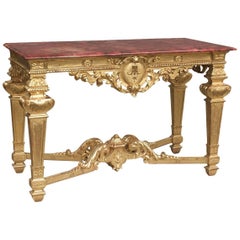 H 35.25 in. W 47.5 in. D 25.5 in.
Mirror Rectangular Console Table, by Jasper Morrison for Glas Italia
By Glas Italia, Jasper Morrison
Located in Macherio, IT
Mirror console is shown here in the mirror slabs and in rectangular. Collection of low tables and consoles available in different sizes, whose base is obtained by gluing 45° water je...
Category

H 33.47 in. W 43.31 in. D 14.97 in.
Sleek Chrome Rectangular Console Sofa Table with Chrome Architectural Pattern
By EICHHOLTZ
Located in Hopewell, NJ
A Mid-Century Modern console or sofa table in the style of Theo Eichholtz. The chrome table features a rectangular profile with an architectural slanted line pattern.
Category

H 29 in. W 46.5 in. D 15 in.
Rectangular Console Table, Natural Organic Shape, Petrified Wood with Metal Base
By Pietra Gallery
Located in Polanco, CDMX
Source: Java, Indonesia. Wood fossilization is a group of processes where all organic material is replaced by minerals. Petrification process occurs underground when wood is buried ...
Category

H 31.11 in. W 48.43 in. D 19.69 in.
Rectangular Console Table, Natural Organic Shape, Petrified Wood with Metal Base
By Pietra Gallery
Located in Polanco, CDMX
Source: Java, Indonesia. Wood fossilization is a group of processes where all organic material is replaced by minerals. Petrification process occurs underground when wood is buried ...
Category

H 27 in. W 57 in. D 15 in.
Ghidini 1961 Legs Rectangular Console Table in Calacatta Gold by Paolo Rizzatto
By Paolo Rizzatto, Ghidini 1961
Located in Villa Carcina, IT
Rectangular table in crystal and brass. The designer imagines a turning point in the use of such a precious finishes such as polished brass: from the idea of almost a unique object i...
Category

H 28.5 in. W 55.25 in. D 16 in.
Pair of Rectangular Marble-Topped Walnut Console Tables
Located in Stamford, GB
A pair of rose marble-topped console tables from Ireland. With beautiful walnut veneer front, back and sides, scallop detail centre front and on the top of each leg. Made circa 1740....
Category

H 29 in. W 52 in. D 18 in.
Rectangular Bronze Console Table with Tapered and Chiseled Steel Legs
By Doud Studios
Located in Pebble Beach, CA
The polished bronze tabletop of this rectangular console table is smooth and reflective. The hammered steel legs have forged chiseled details and taper to a point. Designed and c...
Category

H 26 in. W 59 in. D 15 in.
Rectangular Bronze Wall Console with Tapered and Chiseled Steel Legs
By Doud Studios
Located in Pebble Beach, CA
The polished bronze top of this rectangular wall console is smooth and reflective. The two hammered steel legs have forged chiselled details and taper to a point. Two bronze brackets...
Category

H 28.75 in. W 53.15 in. D 14.57 in.
Long Rectangular Hollywood Regency Bamboo Rattan and Bentwood Sofa Console Table
Located in Oklahoma City, OK
A long bamboo and wicker or rattan console table. This would make a great piece for behind a sofa or in an entryway. The top of this piece features pieces of rattan fashioned into tw...
Category

H 29.75 in. W 63 in. D 19.75 in.
Pair of Art Deco Rectangular Wood and Goat Skin French Console Tables, 1920
Located in Rome, IT
Rich in movements, pair of Art Deco console tables. The wooden top is covered with parchment leather or goat skin and is rectangular with a sharp edge. The top rests on a frame in ...
Category

H 35.44 in. W 54.34 in. D 14.97 in.
1990 Rectangular Handcrafted Tubular Brass Consolle
Located in Milano, IT
Modern and attractive design of this rectangular handcrafted brass console, a splendid and elegant piece for your home, has very few small scratches.
Category

H 45.5 in. W 35 in. D 2 in.
Rectangular Teak and Slate Table by Haslev
By Haslev Mobelsnedkeri
Located in Brooklyn, NY
Console table of solid teak manufactured by Haslev in 1985 with slate tile top. This versatile size will make a great sofa table, entry way or any variety of uses. Durable natural sl...
Category

H 27.75 in. W 47.75 in. D 16.75 in.
Italian Beechwood Rectangular Center Table with Marble Top
Located in WEST PALM BEACH, FL
This is an impressive Italian beechwood center table with a cream marble top with straight edge over a prominent frieze carved. The frieze is designed with a series hand of carved in...
Category

H 33.75 in. W 81 in. D 35.25 in.
Jasper Morrison Rectangular Bac Table in Solid Ashwood for Cappellini
By Jasper Morrison, Cappellini
Located in New York, NY
The Bac table, designed by Jasper Morrison, is made of solid ashwood with a bleached, wengé-stained, Shanghai blue finish, or black-stained finish. Available in round and rectangular...
Category

H 28.35 in. W 94.49 in. D 33.47 in.
Jasper Morrison Rectangular Bac Table in Wenge Stained Ash for Cappellini
By Cappellini, Jasper Morrison
Located in New York, NY
The Bac table, designed by Jasper Morrison, is made of solid ashwood with a bleached, wengÃ©-stained, Shanghai blue finish, or black-stained finish. Available in round and rectangula...
Category

H 31.5 in. W 51.19 in. D 27.17 in.
Italian Brass Mirror with Rectangular Relief Edges
Located in London, GB
Rectangular wall mirror with descending steps at the sides in brass is Italian 1970's. Ideal over a console or fireplace.
Category

H 27.56 in. W 34.26 in. D 4.73 in.
Regency Verre Eglomisé and Giltwood Rectangular Pier Mirror
Located in London, GB
A Regency period carved giltwood pier mirror with light blue and verre églomisé panel to the frieze, with columns to each side surmounted by Ionic capitols, the shaped central plate ...
Category

H 26 in. W 54 in. D 16 in.
Sophisticated Mid-Century Modern Rectangular Console Cabinet
Located in Hopewell, NJ
A sleek super functional rectangular console cabinet having two stacked drawers at each end and two accordian doors in the middle that open to interior storage. Two of the drawers ar...
Category

H 33 in. W 36 in. D 18 in.
English Chippendale Rectangular Mahogany Antique Console Center Table circa 1770
Located in Shippensburg, PA
An excellent Chippendale console table crafted of dense solid mahogany during the third quarter of the 18th century, the form is simple and clean. Intended to serve as a center table...
Category

Rectangular Consoles For Sale on 1stDibs

How Much are Rectangular Consoles?