W 0.3 in. L 16 in.
Tiffany & Co. Gold Mesh Necklace with Diamonds
By Tiffany & Co.
Located in Darnestown, MD
Delicate 18 karat gold mesh necklace by Tiffany with 5 diamonds. The necklace has a scalloped design with a diamond in the shorter part of each scallop. Total diamond weight is appro...
Category 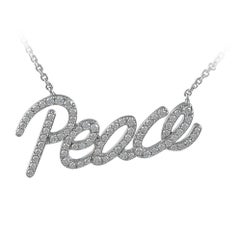 Dm .49 in. L 16.0 in.
Tiffany & Co. Graduated Diamond Drop Pendant Necklace in 18 Karat Rose Gold
By Tiffany & Co.
Located in Scottsdale, AZ
This lovely graduated diamond pendant necklace from Tiffany & Co. is stunningly simple, yet impressively elegant. This is one of those necklaces that you will never want to take off!...
Category

On 1stDibs, you can find the most appropriate tiffany diamond gold necklace for your needs in our varied inventory. Each design created in this style — which was crafted with great care and often made from Gold, 18k Gold and Yellow Gold — can elevate any look. You can easily find a 334 antique edition and 250 modern creations to choose from as well. Making the right choice when shopping for a tiffany diamond gold necklace may mean carefully reviewing examples of this item dating from different eras — you can find an early iteration of this piece from the 19th Century and a newer version made as recently as the 21st Century, both of which have proven very popular over the years. For this particular accessory, there are many different carat weights to choose from, but .5 Carat and 1 Carat versions are of considerable interest. Creating a tiffany diamond gold necklace has been a part of the legacy of many jewelers, but those produced by Tiffany & Co., Elsa Peretti for Tiffany & Co. and Paloma Picasso for Tiffany & Co. are consistently popular. See these pages for a round cut iteration of this accessory, while there are also brilliant cut cut and old mine cut cut versions available here, too. Finding a tiffany diamond gold necklace for sale for women should be easy, but there are 131 pieces available to browse for unisex as well as men, too.

How Much is a Tiffany Diamond Gold Necklace?

Finding the Right Necklaces for You

We are fortunate to know much of the world’s long and dazzling history of necklaces, as this type of jewelry was so treasured that it was frequently buried with its owners.

Lapis lazuli beads adorned necklaces unearthed from the royal graves at the ancient Iraqi civilization of Sumer, while the excavation of King Tut’s burial chamber revealed a sense of style that led to a frenzy of Art Deco designs, with artisans of the 1920s seeking to emulate the elegant work crafted by Ancient Egypt’s goldsmiths and jewelry makers.

In ancient times, pendant necklaces worn by royalty and nobles conferred wealth and prestige. Today, wearing jewelry is about personal expression: Luxury diamond necklaces exude confidence and can symbolize the celebratory nature of a deep romantic relationship, while paper-clip chain-link necklaces designed by the likes of goldsmith Faye Kim are firmly planted in the past as well as the present. Kim works exclusively with eco-friendly gold, and these fashionable, fun accessories owe to the design of 19th-century watch fobs.

For some, necklaces are thought of as being a solely feminine piece, but this widely loved accessory has been gender-neutral for eons. In fact, just as women rarely took to wearing a single necklace during the Renaissance, men of the era layered chains and valuable pendants atop their bejeweled clothing. In modern times, the free-spirited hippie and counterculture movements of the 1960s saw costume-jewelry designers celebrating self-expression through colorful multistrand necklaces and no shortage of beads, which were worn by anyone and everyone.

Even after all of these years, the necklace remains an irrefutable staple of any complete outfit. Although new trends in jewelry are constantly emerging, the glamour and beauty of the past continue to inform modern styles and designs. In a way, the cyclical history of the necklace differs little from its familiar looped form: The celebrated French jewelry house Van Cleef & Arpels found much inspiration in King Tut, and, now, their Alhambra collection is a go-to for modern royals. Vintage necklaces designed by David Webb — whose work landed him on the cover of Vogue in 1950, two years after opening his Manhattan shop — were likely inspired by the ornamental styles of ancient Greece, Mesopotamia and Egypt.

On 1stDibs, browse top designers like Cartier, Tiffany & Co. and Bvlgari, or shop by your favorite style, from eye-catching choker necklaces to understated links to pearl necklaces and more.