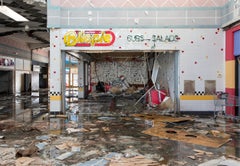 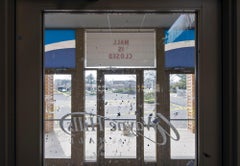 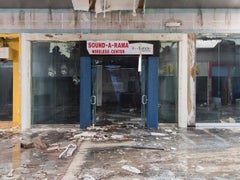 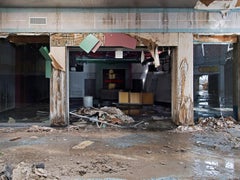 H 30 in. W 40 in.
"Atrium" Wayne Hills Mall, New Jersey (Modern Ruins) color photograph
By Phillip Buehler
Located in New York, NY
limited edition of 5, signed on reverse by the artist, Phillip Buehler. A view of the open panel ceiling of the atrium in the abandoned Wayne Hills Mall. Buehler has captured the ...
Category 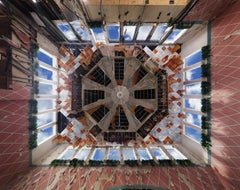 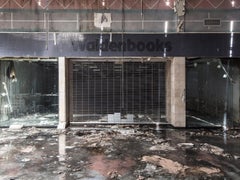 H 30 in. W 40 in.
"Courtyard" Wayne Hills Mall, New Jersey (Modern Ruins) color photograph
By Phillip Buehler
Located in New York, NY
limited edition of 5, signed on reverse by the artist, Phillip Buehler. A view of the crumbling panel ceiling of the courtyard in the abandoned Wayne Hills Mall. Buehler has captu...
Category 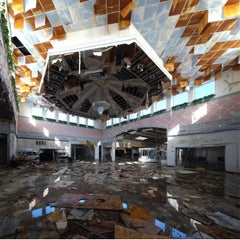 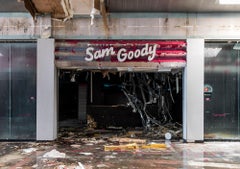 H 30 in. W 40 in.
"Santa's Stage" Wayne Hills Mall, New Jersey (Modern Ruins) color photograph
By Phillip Buehler
Located in New York, NY
limited edition of 5, signed on reverse by the artist, Phillip Buehler. As the Holiday season approaches we can image and remember the stage upon which Santa sat in the Wayne Hill's...
Category 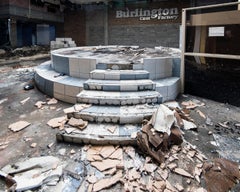 H 30 in. W 40 in.
"Photocenter 2000" Wayne Hills Mall, New Jersey (Modern Ruins) color photograph
By Phillip Buehler
Located in New York, NY
limited edition of 5, signed on reverse by the artist, Phillip Buehler. A flood of water creates a reflected surface of debris along the floor of the abandoned store in this photogr...
Category 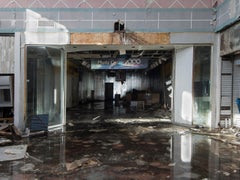 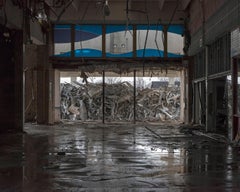 H 30 in. W 40 in.
"Avenue Exterior" Wayne Hills Mall (from Modern Ruins series) color photograph
By Phillip Buehler
Located in New York, NY
limited edition of 5, signed on reverse by the artist, Phillip Buehler. This photograph depicts the faint residual outlines of the sign to the Avenue store at the deserted Wayne Hil...
Category

H 30 in. W 40 in.
"The Town Mouse" Wayne Hills Mall, New Jersey (Modern Ruins) color photograph
By Phillip Buehler
Located in New York, NY
limited edition of 5, signed on reverse by the artist, Phillip Buehler. The quaint facade of the beloved "Town Mouse" has fallen into disrepair amongst other artifacts in the abando...
Category

Find the exact wayne hills mall you’re shopping for in the variety available on 1stDibs. On 1stDibs, the right wayne hills mall is waiting for you and the choices span a range of colors that includes black, gray and blue. Frequently made by artists working in archival pigment print and pigment print, these artworks are unique and have attracted attention over the years. If space is limited, you can find a small wayne hills mall measuring 24 high and 30 wide, while our inventory also includes works up to 60 across to better suit those in the market for a large wayne hills mall.

How Much is a Wayne Hills Mall?

In late 2019, Buehler's body of work on view in the exhibition “Mallrat to Snapchat: The End of the Third Place” — at Front Room Gallery, in New York — may have elicited more nostalgia than the others. It was a look at New Jersey’s defunct Wayne Hills Mall and, by extension, at the dying culture of middle-class suburban shopping centers across the country.

"I started photographing abandoned places the same year the mall opened, 1973, when I was a senior in high school," Buehler told The Study. "At the time, New York was falling apart, with empty piers and abandoned or burned-out buildings everywhere. Back then, nobody was photographing them, so I had no art references — most were cinematic. Two films released in 1968 made a big impression on me: 2001: A Space Odyssey and Planet of the Apes."

Browse a collection of Phillip Buehler's photography on 1stDibs.