Vintage Ivory and Brown Beaded Purse
Located in London, GB
A pretty vintage beaded purse in ivory with rows of brown beads. The purse has a flap over front with button fastening. Inside there is one pouch pocket. The bag has a beda handle wi...
Category 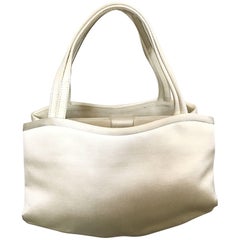 Gucci Vintage White Lizard Skin Square Handbag, Circa 1960
By Gucci
Located in Los Angeles, CA
This is a rare vintage white lizard skin square shaped handbag by Gucci, from the 1960's. It has one handle which is 4.5" high, two main compartments, one with a zipper pocket and on...
Category

H 9 in. W 3.5 in. L 10 in.
Vintage Fendi Handbag in White Leather Oversized Clutch W/ F Logo Pattern
By Fendi
Located in Portland, OR
This large clutch style vintage white leather Fendi handbag has the F logo throughout the leather and measures 10 by 15" with a top zipper closure. This great leather clutch bag is ...
Category

W 10 in. L 15 in.
Dior White Leather Vintage Logo Charms Boston Bag
By Christian Dior
Located in Dubai, Al Qouz 2
This stylish Boston bag by Dior has been crafted to assist you with ease and style on all days. It is crafted from white leather and is accented with logo charms. The bag features du...
Category

H 5.52 in. L 9.45 in.
Couture Timeless CHANEL Vintage Bag in White Lambskin Leather
By Chanel
Located in Paris, FR
Classic and timeless, this vintage CHANEL bag is in white lambskin leather. The jewelry is in gold metal and the clasp is two-tone, gold and silver metal. Worn over the shoulder. Go...
Category

H 7.29 in. W 5.12 in. L 11.42 in.
Vintage Kelly 32 HERMES in Grey and White Leather
By Hermès
Located in Paris, FR
Elegant Kelly 32 vintage handbag in grey and white leather. You can figurate the color on the second picture. The leather has been retained. Carried by hand. Vintage. Circa 1950/196...
Category

H 9.06 in. W 4.53 in. L 12.6 in.
Celine White/Black Leather Vintage Weekender Bag
By Celine
Located in Dubai, Al Qouz 2
Designed to assist you on your travel sprees, this Celine Weekender bag comes crafted from leather and styled with two top handles and the brand logo on the front. It has a spacious ...
Category

H 6.5 in. D 3 in. L 9.5 in.
Vintage Hermès Sac Cordelière White Patent Leather Envelope Handbag- 25 cm, 1951
By Hermès
Located in Tucson, AZ
Though it is almost 70 years old, this magnificent handbag is as lustrous and stylish as the day it was made in 1951. Best of all it is true, bright white and an ideal complement to ...
Category

H 5.5 in. W 10 in. D 2 in.
Chanel Chain Rare Vintage 90's Freshwater Pearl Black White Tweed Lambskin Bag
By Chanel
Located in Miami, FL
This LIMITED EDITION Mixed Icons bag was a sample and only made in very small quantities. This bag is made from a combination of tweed and lambskin leather with a patent leather bott...
Category

H 7 in. W 11 in. L 6 in.
Celine Leather and Snakeskin Black, Cream and White Hobo Shoulder Bag Vintage
By Celine
Located in North Miami, FL
This absolutely stunning, vintage and never used french Celine shoulder bag/ hobo bag is made of fine butter likeleather with a black and white snakeskin panel in the center. It is t...
Category

Vintage Gucci Ladies White Canvas and Brown Leather Designer Handbag or Purse
By Gucci
Located in Hamilton, Ontario
This vintage ladies handbag was made by the renowned Italian designer Gucci in the 1990s. The bag is done in a heavy white canvas with brown leather straps and accents, and heavy bra...
Category

Vintage Japanese Floral White Beaded Envelope Clutch
Located in Pahrump, NV
This vintage white beaded envelope clutch has a very simple floral design. It is made in Japan and although vintage shows little signs of wear. It has a silk interior with one pocket...
Category

Find the exact vintage or contemporary white vintage purse you’re shopping for in the variety available on 1stDibs. Gray is a pretty popular color, but we also have White, Black, Beige and more in stock now. Finding the perfect white vintage purse may mean sifting through those that were made during different time periods — popular versions were made as early as the 20th Century and a newer one, made as recently as the 21st Century, can also be found on the site. Finding an appealing accessory such as this — no matter the origin — is easy, but Chanel, Hermès and Gucci each produced a popular version that is worth a look. Finding a white vintage purse for sale for women should be easy, but there are 44 pieces available to browse for men as well.

How Much is a White Vintage Purse?