Auguste Delaherche turned the science of experimentation in ceramic ware into an art form. Coming from a long tradition of potters in the Beauvais region of France dating back to antiquity, Delaherche displayed a fascination and an appreciation for ceramics from an early age. After studies in Paris at the Ecole des Arts Decoratifs, Delaherche worked for several years producing utilitarian salt-glazed stoneware. Like Ernest Chaplet, from whom he bought his Vaugirard workshop in 1887, Delaherche was an innovator; he saw artistic merit and the untapped potential of stoneware. He worked exclusively with this material, which was very rare for the period. Inspired by enameled Japanese stoneware, he perfected his enamel glazing techniques during this time that are characterized by subtle gradations of tone. A consummate experimental potter, Delaherche was disciplined and methodical. This vase shows Delaherche at his breakout moment when he truly became an art potter. Delaherche had exhibited his work at the Union Centrale des Arts Decoratifs in Paris, but it was at the Exposition Universelle of 1889, where he won a gold medal, that he received both critical and popular acclaim. This vase reveals much about Delaherche. Stylistically, the floral band demonstrates a link to French folk pottery; while the decorative pattern of overlapping shells shows a broader inquiry and awareness Delaherche had about other cultures as well as fellow contemporary ceramists. This painted pattern also relates to incised stoneware he produced later in his career. For Delaherche, there was always more to learn and more to master. By 1894, he left Paris for the hamlet of Armentieres located nearby to his native Beauvais. From his atelier, which he called les Sables Rouges (the red sands), Delaherche’s work shows adherence to Modernist principles in privileging the formal qualities to achieve overall abstraction. Assisted only by his wife, Delaherche preferred autonomous control and had no tolerance for the unexpected effects sometimes produced during the firing process. With sobriety and a disciplined approach to his work, Delaherche would destroy any piece that did not demonstrate complete mastery of the artistic process. This early example of Delaherche’s life-long inquiry into the possibilities of stoneware is a sweet one. It demonstrates sentimentality for those who had come before and made an impact on the artist, while also capturing the hopes and aspirations of the young master. 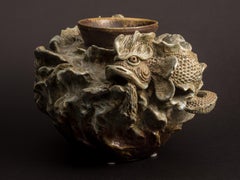 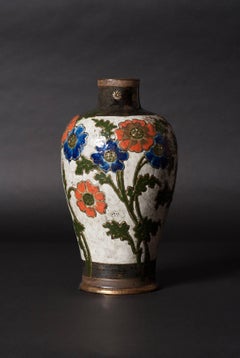