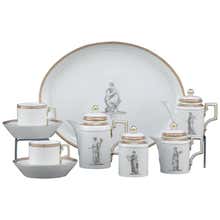 Pair of 19th Century Porcelain Vases & Covers By KPM Berlin
By KPM Porcelain
Located in Dublin, IE
A stunning pair of showpiece KPM porcelain vases and covers, each with domed cover above a white glazed body of ovoid form, with applied twin carry handles and painted scenes of cour...
Category

Faux Micromosaic and Pietre Dure Porcelain Cup and Saucer by KPM
By KPM Porcelain
Located in New Orleans, LA
Painstaking precision was necessary for the execution of the incredible hand painting seen on this elegant KPM Porcelain cup and saucer. The technique was created to resemble ancient...
Category

Set of 13 KPM Dinner Plates Each Painted Differently With Raised Forget Me Nots
By KPM Porcelain
Located in Boston, MA
Set of thirteen KPM dinner plates, each painted with different pink and green flower bouquet, with raised forget me nots. The border is fluted and has a pink oval design with blue ra...
Category

Pair of White Porcelain Table Lamps by KPM, Berlin, 1930s
By KPM Porcelain
Located in Maastricht, NL
A pair of white porcelain table lamps, designed by Alice von Pechmann for KPM Berlin. The lamp has two fittings and a brass pinecone decoration on top. The measurements, price and s...
Category

KPM Cabinet Plate with Intricate Reticulation and a Central Painting of Pansies
By KPM Porcelain
Located in Boston, MA
I am offering you this fabulous KPM fluted cabinet plate with gold and white intricate reticulation. There is a beautiful painting of a bouquet of pansies on the center of the plate ...
Category

Midcentury-Modern Set of Six KPM Turtle Dishes in White Porcelain
By KPM Porcelain
Located in Kitzbuhel, AT
Set of six KPM porcelain dishes in white porcelain. Formed as naturalistic turtles. Designed 1938 by Dormann. Can be used as salt dishes or for nuts or whatever. Very nice table deco...
Category

"Nude with Fish," Rare, Art Nouveau Porcelain Sculpture for Crown Prince Wilhelm
By KPM Porcelain
Located in Philadelphia, PA
Rare and striking, this porcelain sculpture depicting a nude Japanese male figure carrying a fish on his shoulders was sculpted by Adolf (or Adolph) Amberg for KPM in 1905, to celebr...
Category

Large Blanc de Chine Berlin Porcelain Vase
By KPM Porcelain
Located in New York, NY
This tall, slender, blanc de chine porcelain vase was made around 1910 in Berlin by KPM, and was probably designed by Alexander Kips. Blending elements of the Art Nouveau and Rococo ...
Category

Large KPM Porcelain Plaque of the Three Fates
By KPM Porcelain
Located in London, GB
Painted by Louis Scherf (1870-1955), after a painting by F.P. Thumann. The three Fates, Atropos, Clotho and Lachesis are finely polychrome painted. Atropos, the oldest of the thre...
Category

KPM Porcelain Large Octagonal Bowl
By KPM Porcelain
Located in Guaynabo, PR
This is a KPM Porcelain large octagonal bowl. It depicts a large bouquet of flowers in the center and four small ones around the border. A delicate gilt vine of hearts and ivy leaves...
Category

KPM Berlin Porcelain Plaque 'Summer Evening' by Louis Knoeller, circa 1900
By KPM Porcelain
Located in Vienna, AT
Exquisite porcelain painting in original gilded frame Depiction of two young women with a child on a summer evening in a village landscape with a castle. Polychrome painted in war...
Category

Set of Six Signed KPM Dessert Plates with Named Plant Species
By KPM Porcelain
Located in Great Barrington, MA
An amazing set of six KPM hand painted dessert or cabinet plates. What set these apart are the subjects which make them extremely rare. Instead of the more common subjects of fruit a...
Category

Royal Porcelain Manufactory/State’s Porcelain Manufactory 'KPM' Porcelain Group
By KPM Porcelain
Located in Guaynabo, PR
Large Rococo porcelain figure group depicting a scene of peasants, a young woman playing a guitar in the top of a rock accompanied by a young couple and a little girl who are holding...
Category

KPM Berlin Porcelain Picture Plaque Portrait of a Girl with Veil, ca 1830
By KPM Porcelain
Located in Vienna, AT
Portrait of a girl in oriental-style clothing with a headdress and veil in a scenic setting. In original, gilded wood frame with acanthus leaf and oak leaf garland carving. Manuf...
Category

Set of 9 KPM Pots de Creme Each Painted with Different Flowers and Butterflies
By KPM Porcelain
Located in Boston, MA
I would like to offer you this rare set of nine KPM pot de creme in the Kirkland pattern. Each pot de creme is painted with different flowers and different butterflies. They each hav...
Category

19th Century KPM Porcelain Plaque of the Queen of Prussia
By KPM Porcelain
Located in London, GB
This beautiful antique porcelain plaque exhibits the fine quality of craftsmanship and artistry that the prestigious Berlin porcelain manufactory, KPM, is renowned for. The plaqu...
Category

19th Century KPM Porcelain Plaque of the Queen of Prussia

Berlin KPM Porcelain Hand Painted Oval Plaque Portrait of a Girl
By KPM Porcelain
Located in Guaynabo, PR
A porcelain plaque portrait from KPM that depicts a young girl sitting in a stone bench after gathering some roses in her shawl and embellish her turban with one of them. Beautifully...
Category

Very Fine KPM Porcelain Plaque of a Young Woman, circa 1890

The KPM Porcelain Furniture is available for sale on 1stDibs. These distinctive objects are often made of ceramics and are designed with extraordinary care. In our collection of KPM porcelain furniture, there are many options to choose from, although brown editions of this piece are particularly popular. We have 93 vintage editions of these items in-stock, while there is 0 modern edition to choose from as well. Many original furniture by KPM Porcelain were created in Europe during the 18th century and earlier in the Rococo style. If you are looking for additional options, many customers also consider furniture by Peter Keil Furniture, Königliche Porzellan-Manufaktur (KPM) Furniture and Johann Joachim Kändler. The prices for KPM porcelain furniture can vary depending on size, time period and other attributes. On Amazon, the price for these items starts at $200 and tops out at $125,000, while pieces like these can sell for $4,500 on average.