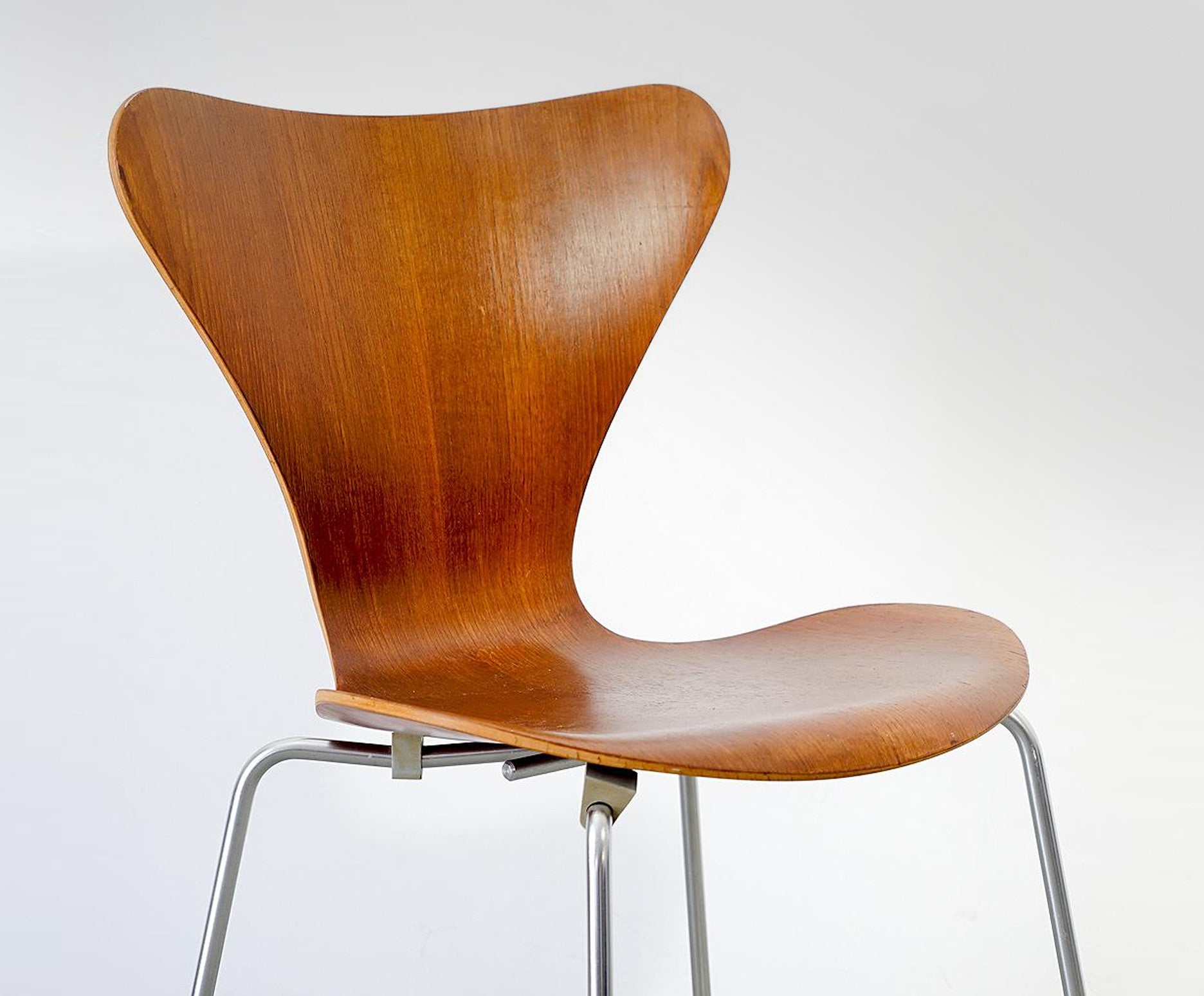 The celebrated Model 3107, or Series 7, chair showcases Arne Jacobsen’s (1902–71) trademark understatement and interplay between form and functionality. Part of a seductive foray into minimalism for the modernist Danish architect and designer, the Series 7’s seat and backrest were produced from a single piece of bent plywood in 1955 for manufacturer Fritz Hansen. The lean, stackable chair updates Jacobsen’s simple and spare 1952 Ant chair to a broader base while retaining its revolutionary construction (also a one-piece seat and back) and adding an extra leg. It was a thoroughly modern design inspired in equal parts by the Danish cabinetmaking tradition that preceded Jacobsen as well as the gentle and organic forms that typified Scandinavian modernist furniture. The chair was also a technical advancement of Charles and Ray Eames’ innovative plywood molding techniques.

Trained as a mason and then an architect, Jacobsen assisted in Copenhagen's City Architect's Office after graduating from the Royal Danish Academy of Fine Arts in 1927, where he eventually became a professor. He set up his own design practice in 1930 and produced large-scale projects such as the Bellavista housing estate, a revered work of Bauhaus-style architecture situated north of Copenhagen in Klampenborg.

In 1960, Jacobsen completed his architectural work on the 22-story SAS Royal Hotel and Air Terminal in Denmark’s capital city, but, as he preferred to be involved thoroughly in such commissions, he designed the interiors as well as every other possible detail for the accommodation property, from lighting to textiles to furniture. A diverse designer with a world-famous work ethic, Jacobsen also created modern light fixtures, bathroom fittings, cutlery and metalware — a 1957 set of flatware he designed for A. Michelsen was featured in Stanley Kubrick’s 2001: A Space Odyssey.

Jacobsen was one of the most successful and accomplished Danish designers of the 20th century. Along with the Ant and massively successful Series 7, his Swan and Egg chairs, produced in 1958 for the SAS hotel, are definitive exports and exemplify Danish modern’s marriage of quality materials, simplicity and thoughtful form. The Series 7 has remained in production since 1955 at Fritz Hansen, where carpenters carefully select and cut sheets of veneer by hand in order to maintain the chair’s classic shape. It remains among Jacobsen’s most simple and pared-down chairs, and while each model is made of pressure-molded sliced veneer, the Series 7 is available in varying veneers and finishes. It is the most sold chair in the manufacturer’s history.

1 Vintage Series 7 Chair by Arne Jacobsen for Fritz Hansen
By Arne Jacobsen
Located in Pasadena, TX
Arne Jacobsen Denmark (1902-1971) Arne Jacobsen bought a plywood chair designed by Charles Eames and installed it in his own studio, where it inspired one of the most commercially ...
Category

Arne Jacobsen for Fritz Hansen Dark Brown Wooden "Butterfly"Chairs, Denmark 1976
By Arne Jacobsen, Fritz Hansen
Located in Amsterdam, NL
Dark brown Butterfly chairs by Arne Jacobsen. We have five older ones with the metal caps, of these the legs have been repainted in silver. We have seven with the plastic caps from 1...
Category

Arne Jacobsen Set of 4 Model 3107 Chairs
By Arne Jacobsen, Fritz Hansen
Located in Mexico City, MX
A set of 4 ash plywood and steel model 3107 (number 7) chairs by Arne Jacobsen. These chairs were manufactured in 1999 by Fritz Hansen and distributed by Knoll Studio. The chair's wo...
Category

Butterfly Series 7 with Armrests by Arne Jacobsen for Fritz Hansen 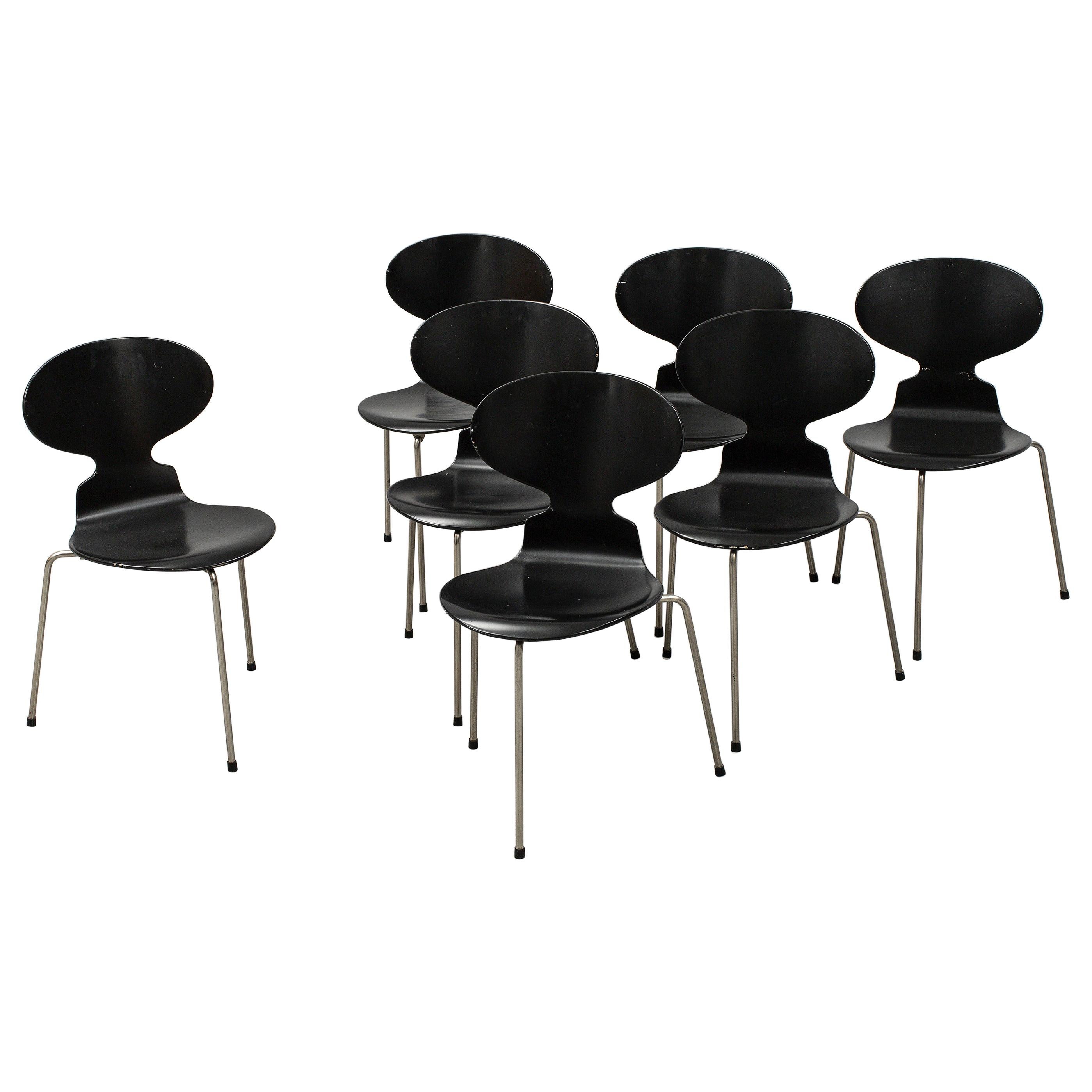 Ant Chair
Average Price
$2,327
Number Available
21
Ant Chair
By Arne Jacobsen
Materials
Wood, Metal
Styles
Mid Century Modern, Scandinavian Modern
For almost anybody else in the early 1950s, designing a three-legged chair inspired by the shape of an ant with its head raised would be unthinkable. But Arne Jacobsen (1902–71), the modernist Danish designer and architect, was always ahead of his time. His Ant chair is part of his legacy of designing avant-garde, unusual and revolutionary chairs like the Egg, the Swan and the Drop. As a child, Jacobsen covered the Victorian wallpaper in his bedroom with white paint, the beginning of a lifet...
Shop All 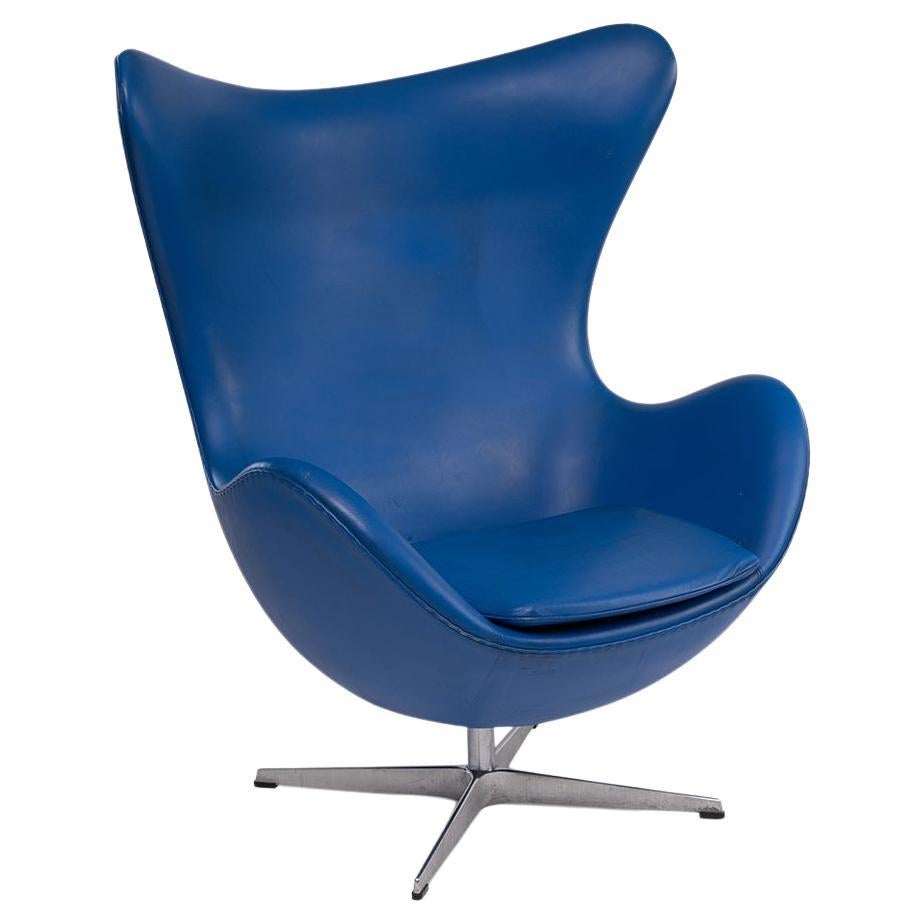 Egg Chair
Average Price
$12,769
Number Available
28
Egg Chair
By Arne Jacobsen
Materials
Animal Skin, Leather, Metal, Aluminum
Styles
Scandinavian Modern
Designed in 1958 for the SAS Royal Hotel in Copenhagen, the Egg chair is a Scandinavian classic that has over the years become a fixture of corporate offices. It bears every mark of Arne Jacobsen's (1902–71) outsized perfectionism, for which the Danish architect was widely known. The Egg chair was notable for its overtly organic appearance, which Jacobsen achieved with craft-based padding and upholstery finishing. Unlike the furniture maker’s previous range of shell chairs designed in laminat...
Shop All 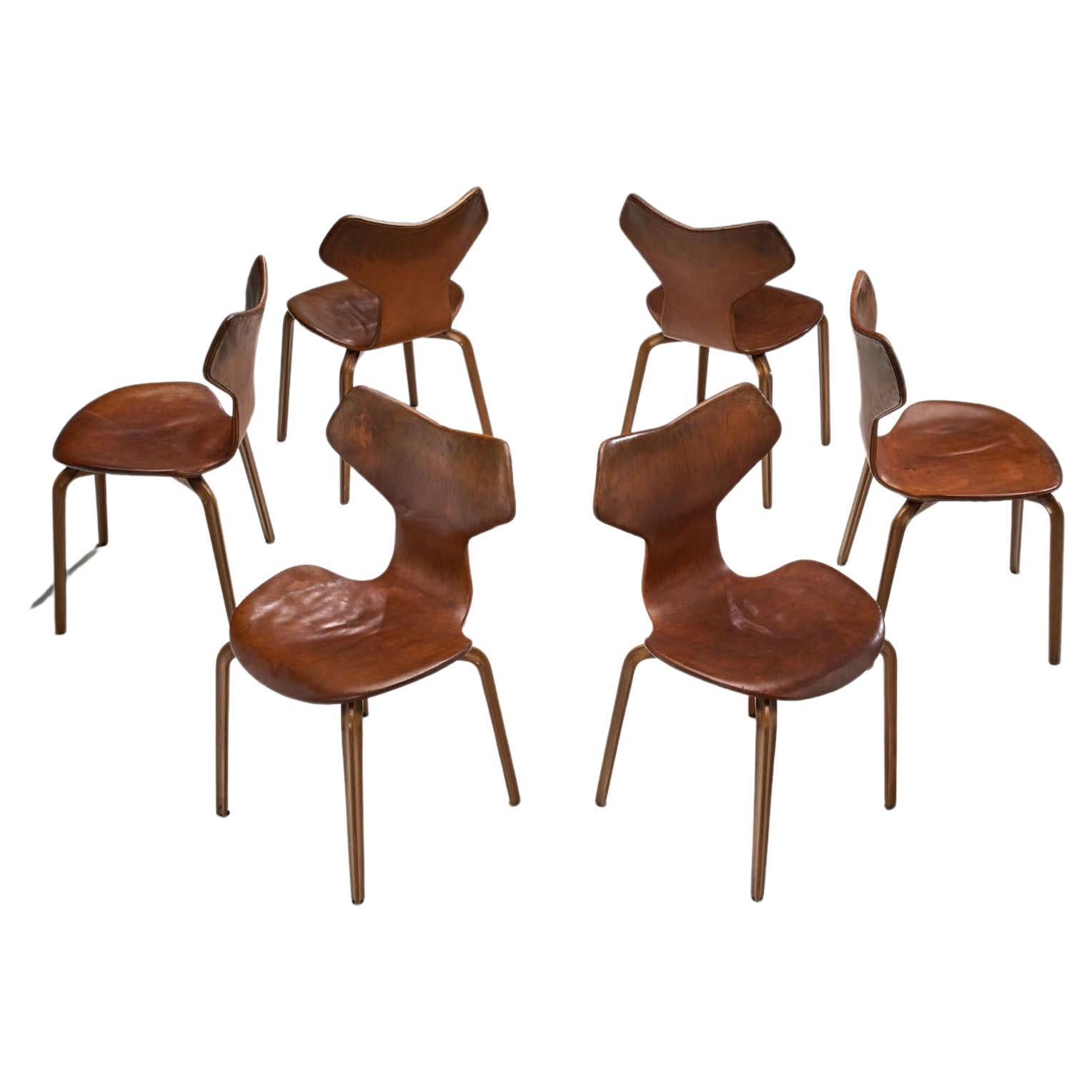 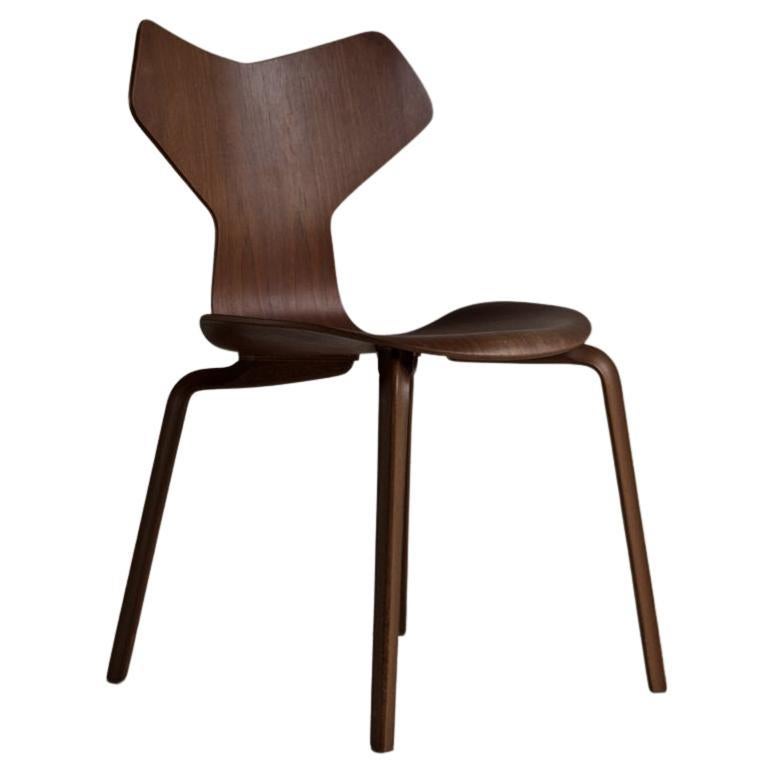