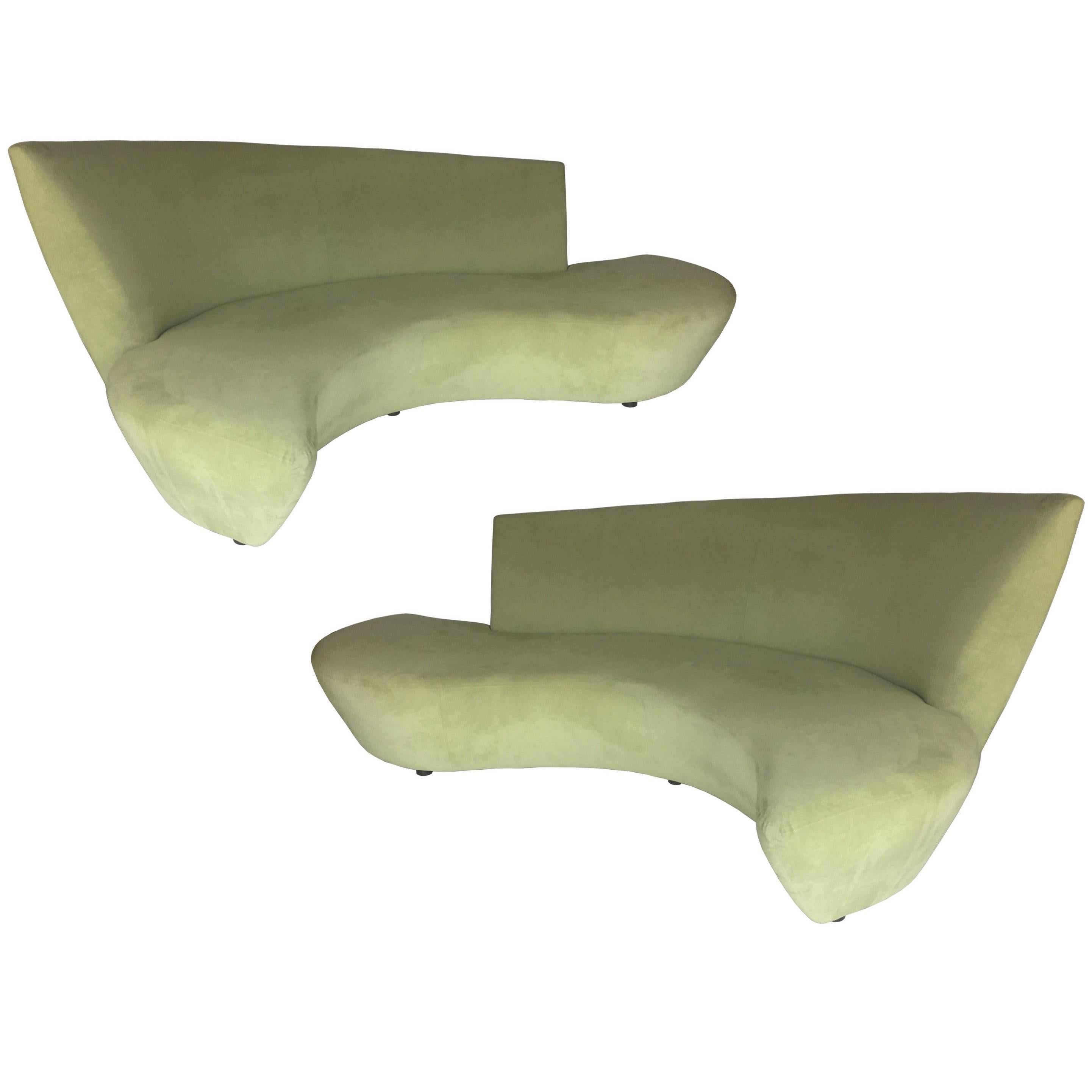 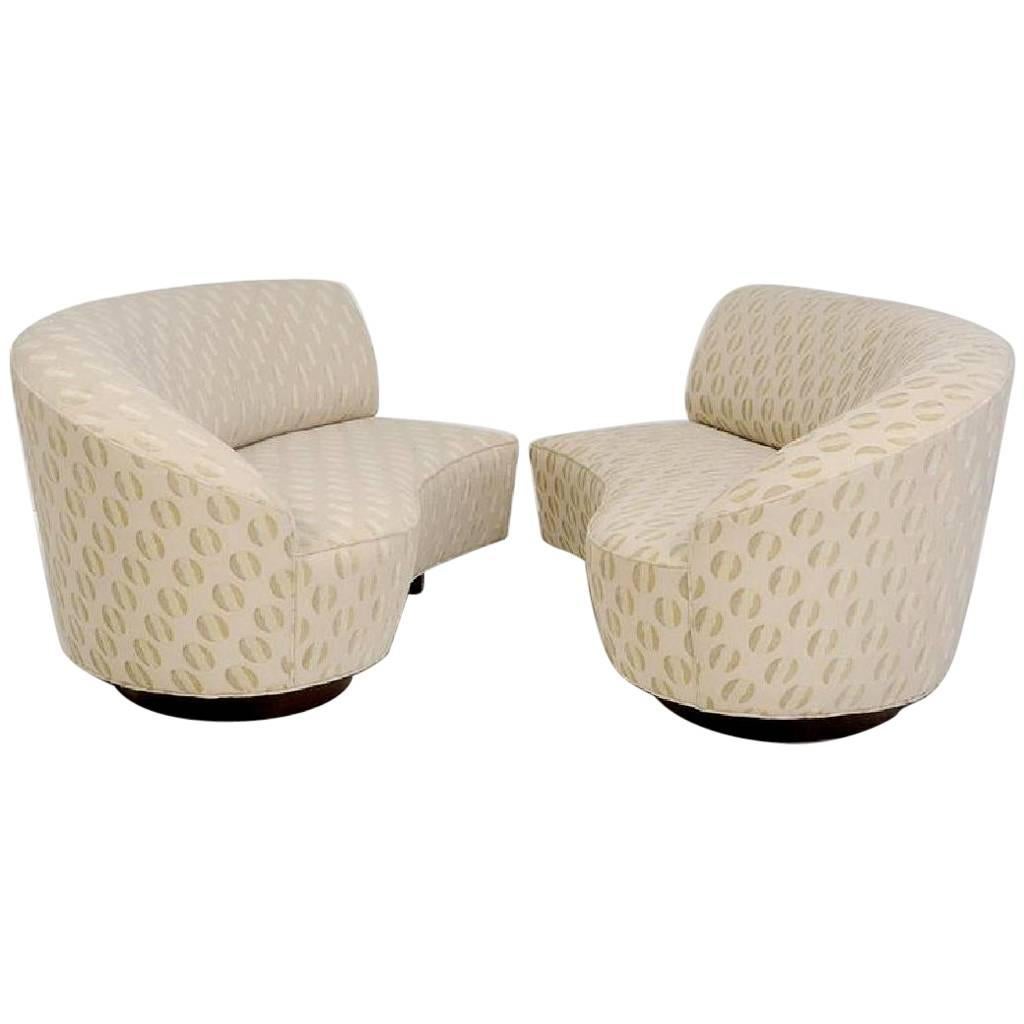 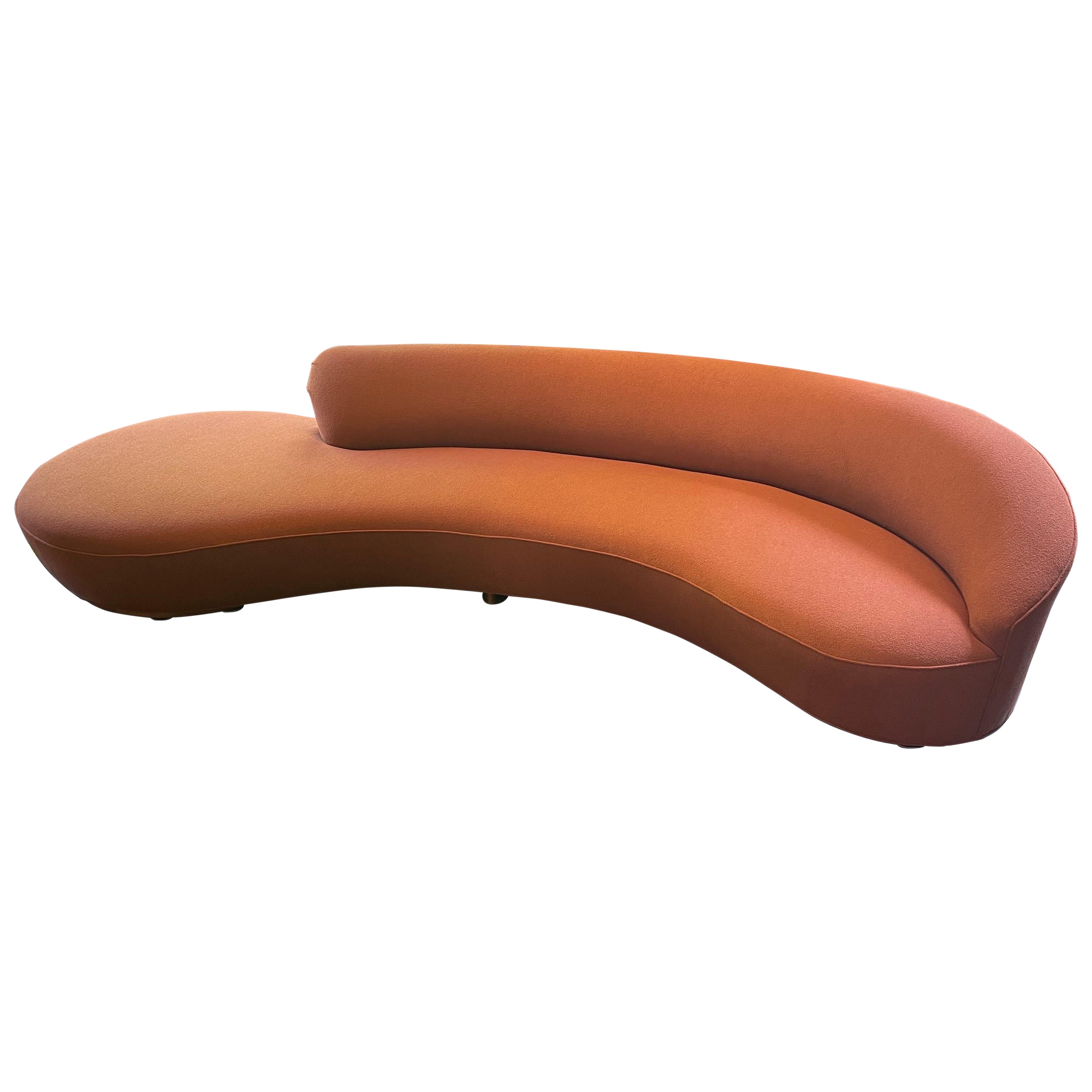 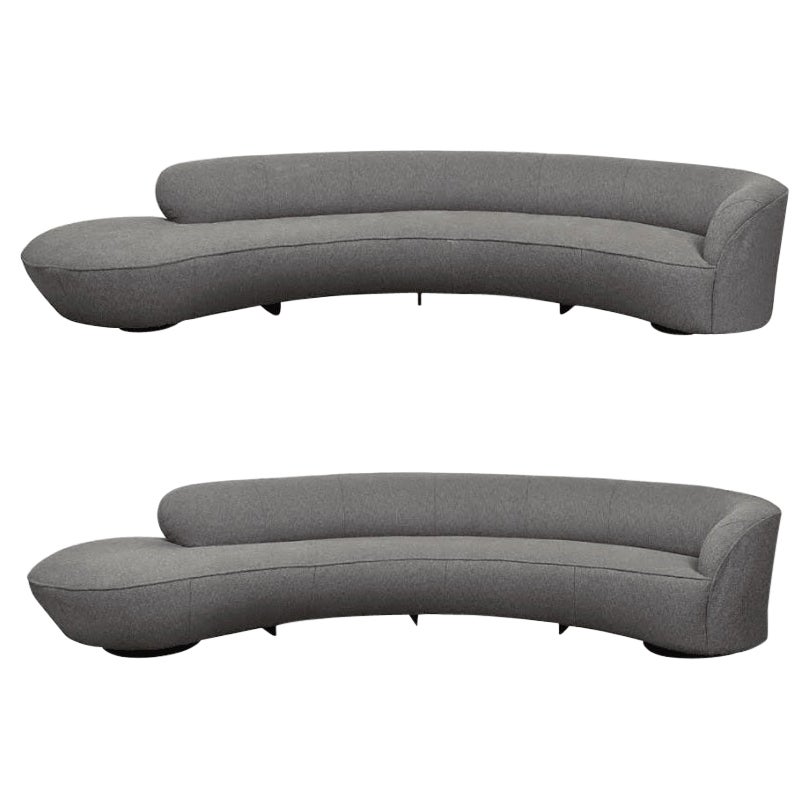 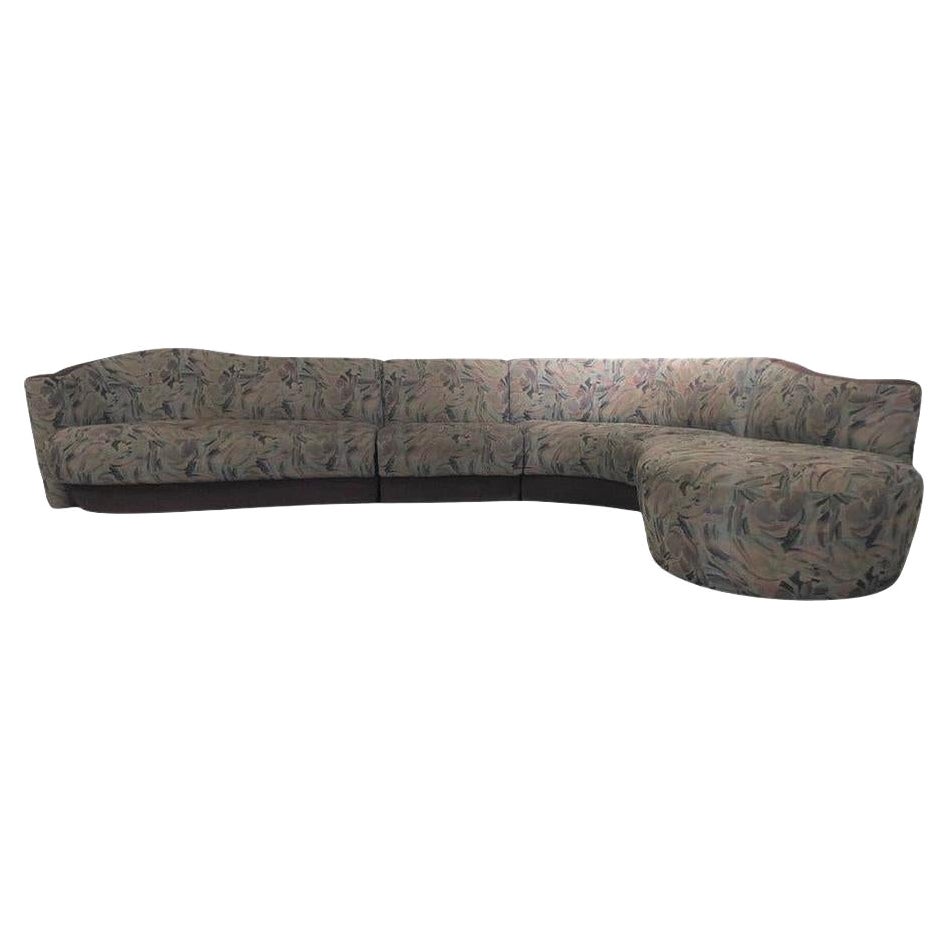 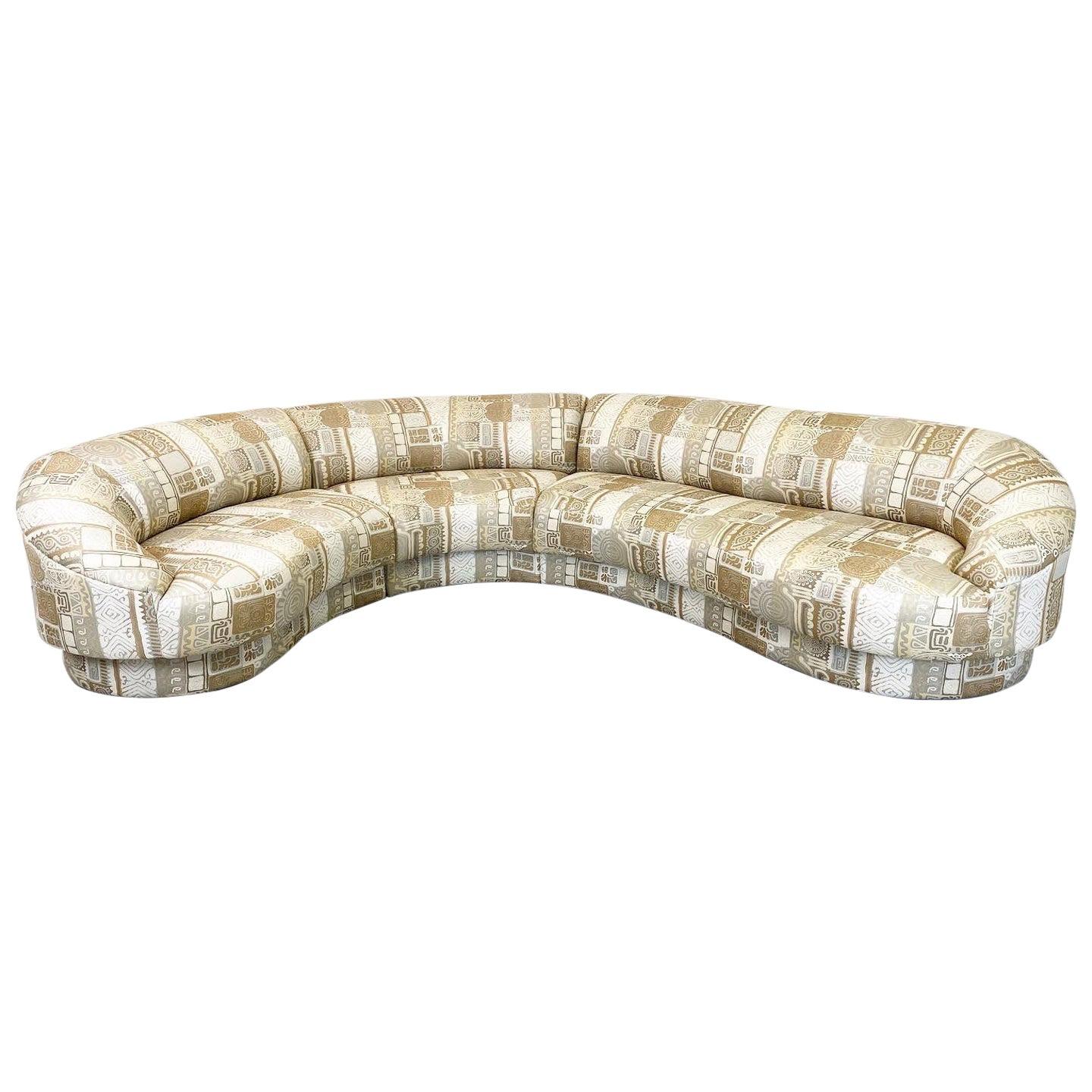 Early 'Serpentine' Sofa by Vladimir Kagan, circa 1960, Signed and Registered 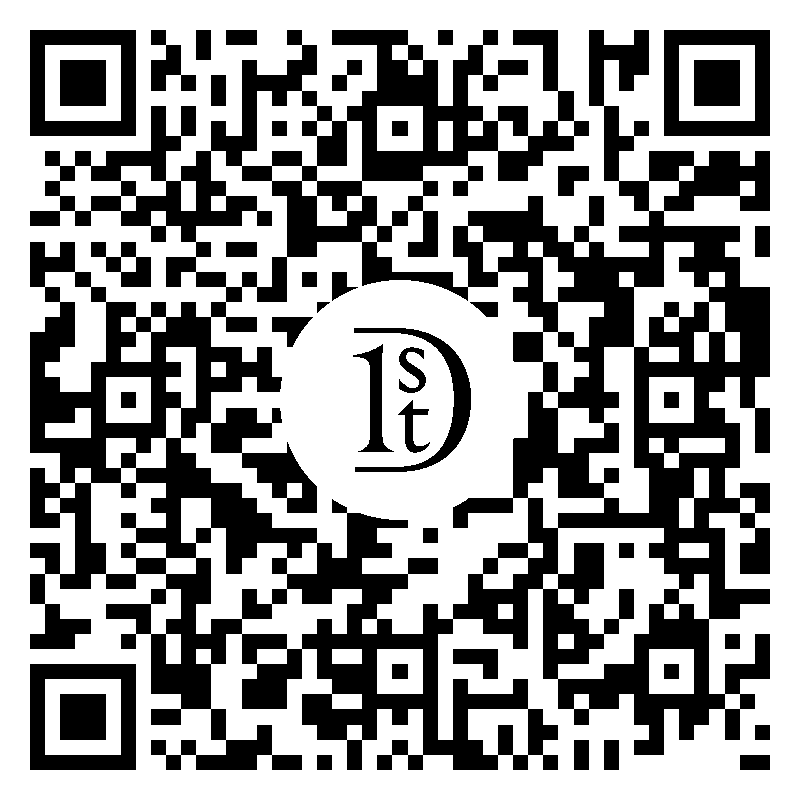 This incredibly rare 'Serpentine' sofa (Model 150-BS) by Vladimir Kagan has just been authenticated by Kagan Design Group and includes a signed registration tag and authentication packet which includes a typed letter explaining the details around the history of the sofa. This gorgeous early production 'original' of the Serpentine design is from the late 1950s to early 1960s based on the construction details as detailed from Kagan Design, they explained in an email: "The Serpentine Sofa is indeed an excellent example of an early Kagan curved sofa. Our team have identified this sofa was likely produced shortly after Hugo Dreyfus retired in 1960 but at the same facility, which would burn down in 1972. Earlier examples (1950s) typically featured differently styled bases and more modest curves at each end, whereas your sofa flourishes into a smoothly rounded pouf atop a round base. This would have been difficult to achieve early on, and instead became a more popular stylization nearer to the end of the 1950s, early 1960s." Ideal for collectors of fine art and modern design or an interior designer looking for the best of the best for their clients. These early year examples of the Serpentine sofa only come up very rarely and are highly in demand and sought-after. While this was produced at the end or shortly after the Kagan-Dreyfuss decade (1950 to 1960) it was in the same factory and with the same equipment and techniques. In addition, as evidenced by Kagan's design groups email explaining the particular design of this sofa versus the ones from the early 1950's - this example has the more desirable curvature and larger pouf which was too difficult for them to produce earlier on. Therefore - this sofa has the best of both worlds - early original and authentic design at the end of or shortly after Hugo Dreyfuss retired while being the model with a more desirable curved shape and design with larger pouf. This elegant Vladimir Kagan Serpentine sofa, model 150BS, would work great in a Mid-Century Modern, Scandanavian Modern or Danish Modern home or penthouse apartment but could also look fantastic in a Contemporary or Post-Modern room. Also consider mixing it up in a Traditional, Transitional, Classical or Art Deco room with a splash of juxtaposition. Would also be an apt choice in a commercial project such as a hotel lobby lounge or members club, creative design studio or high-rise executive office. MEASUREMENTS: H 29" x W 135.5" x D 44" Seat Height: 17" CONDITION: This Kagan Serpentine sofa is an ideal candidate for reupholstery however the current fabric and interior cushion are in good usable vintage condition. The ebonized wood bases have age appropriate wear and can be refinished or used as they are. We can reupholster for $5,000 with COM and refinish the wood bases with an ebonized French Polish for $2,000. Contact us for further details.

Designed by Vladimir Kagan
The voluptuous contours of Vladimir Kagan’s (1927–2016) 1950 Serpentine sofa were designed to bring people together. The S-shaped piece provided both flexible group seating on an armless form as well as a focal point for mid-century entertaining. Unlike most sofas, this one was not designed to be pushed against a wall. Also, people were not supposed to sit on the Serpentine in a row. Rather, the sofa presided over the center of the room as a swoosh of plush seating. The original design included casters so it could easily be maneuvered around for a party or to provide a better view of new art on the walls. Born in Germany, Kagan’s interest in furniture began with his father, a Russian master cabinetmaker. Following the rise of the Nazis, a young Kagan immigrated to the United States in 1938 and shortly thereafter enrolled as an architecture student at Columbia University. Nearly 15 years later, Kagan opened his first furniture company. His concept of modern living was featured in the furniture designs at the Monsanto House of the Future, which was on view at Disneyland from 1957 to 1967. Upholstered in inviting materials, such as seductively hued velvet and Alcantara, Kagan’s furniture demonstrated how modernism could be beguiling even while breaking with the rigid norms of the past. Reflecting the biomorphic shapes in art and sculpture that such creators as Isamu Noguchi promoted as well as celebrating Scandinavian design, each piece was made for both comfort and form in its organic shape. 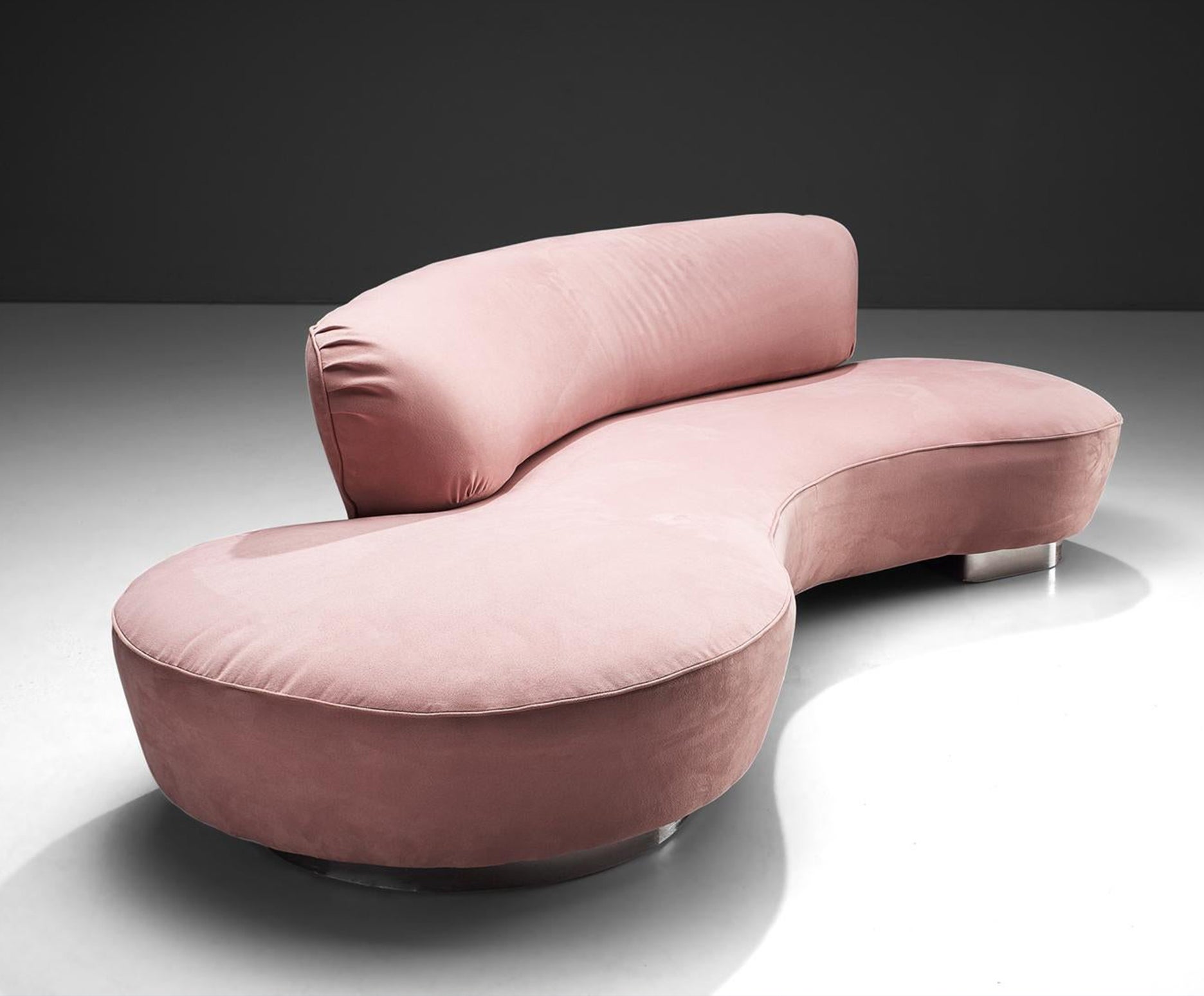 Shop The Serpentine Sofa
About the Seller
5.0
Located in Los Angeles, CA

Recognized Seller
These prestigious sellers are industry leaders and represent the highest echelon for item quality and design.
Diamond Seller
These expertly vetted sellers are 1stDibs' most experienced sellers and are rated highest by our customers.
Established in 2012
1stDibs seller since 2015
1,762 sales on 1stDibs
Typical response time: 1 hour
Associations
20th Century Specialists
More From This Seller

US$72,000 / set
Weiman Serpentine Sectional Sofa Designed by Vladimir Kagan, 4 Pieces
By Weiman
Located in Chicago, IL
Gorgeous. Original upholstery. This sofa is in incredible condition and so comfortable. Can be used as is or redone to the fabric of your choice. Such an elegant sectional. Designed ...
Category

Cloud Sofa in the Style of Vladimir Kagan 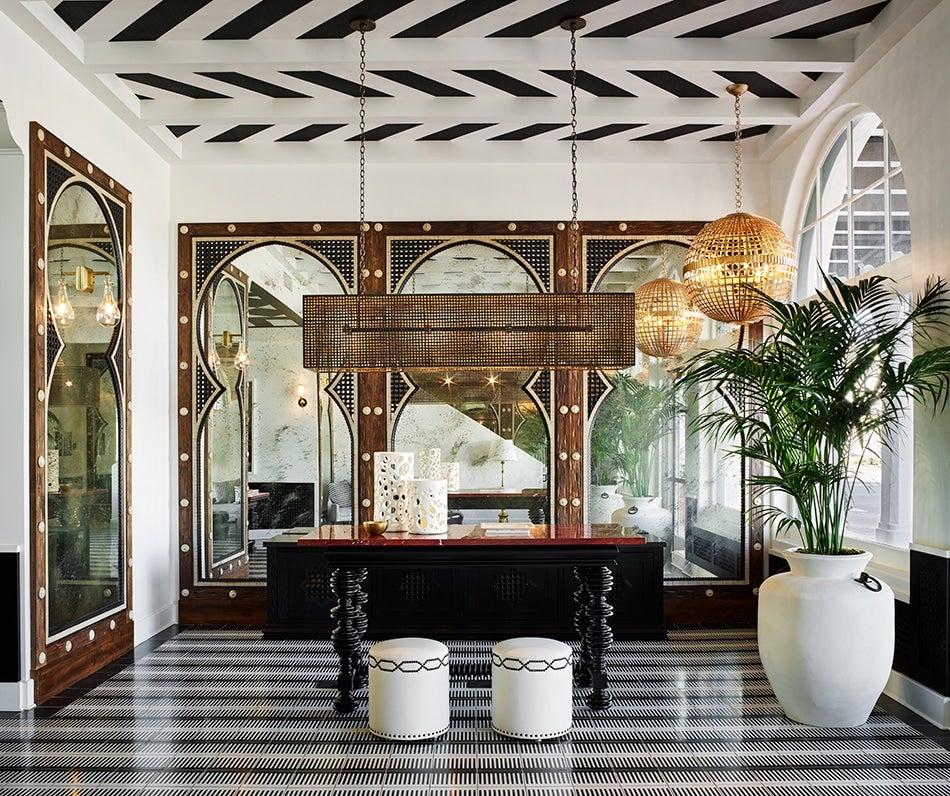