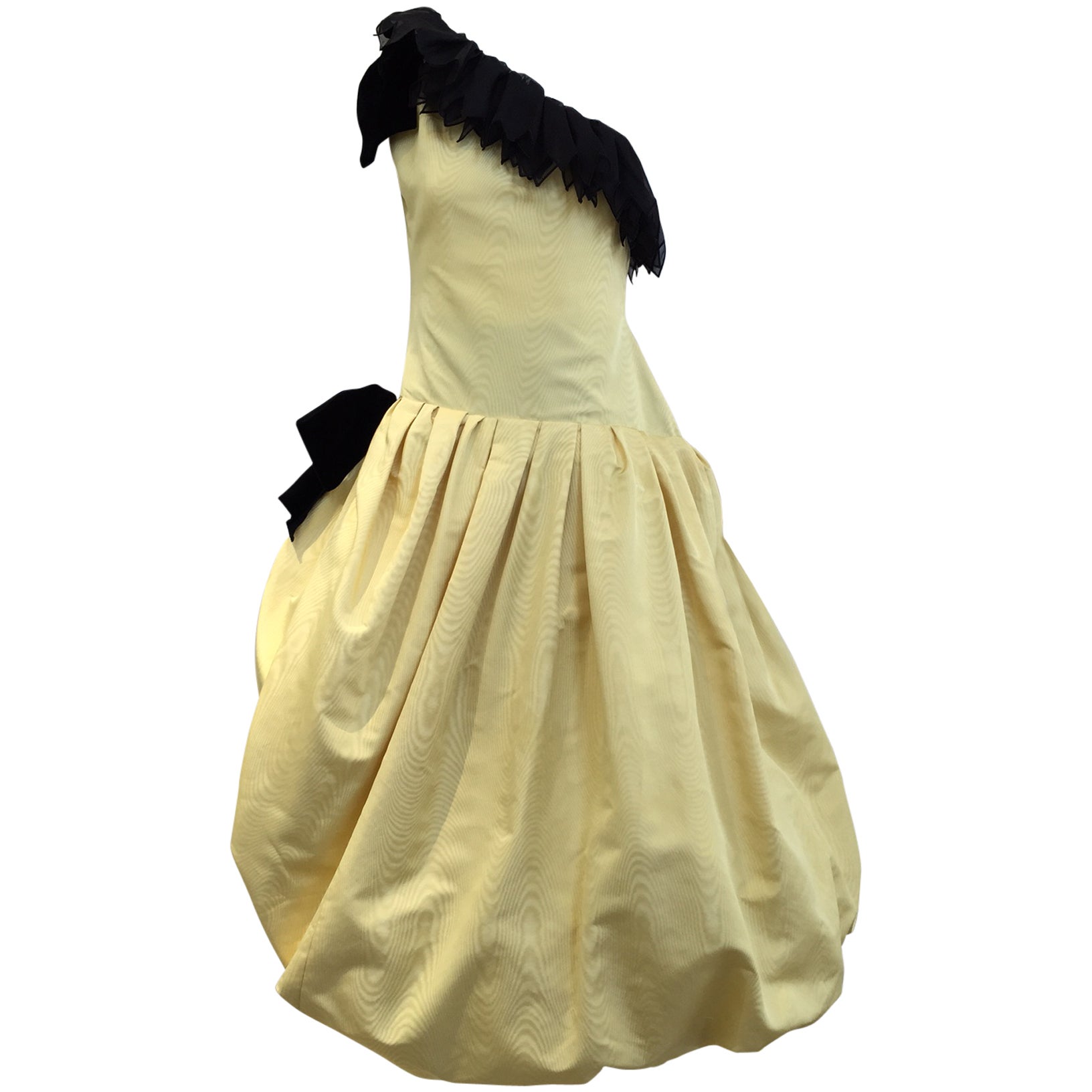 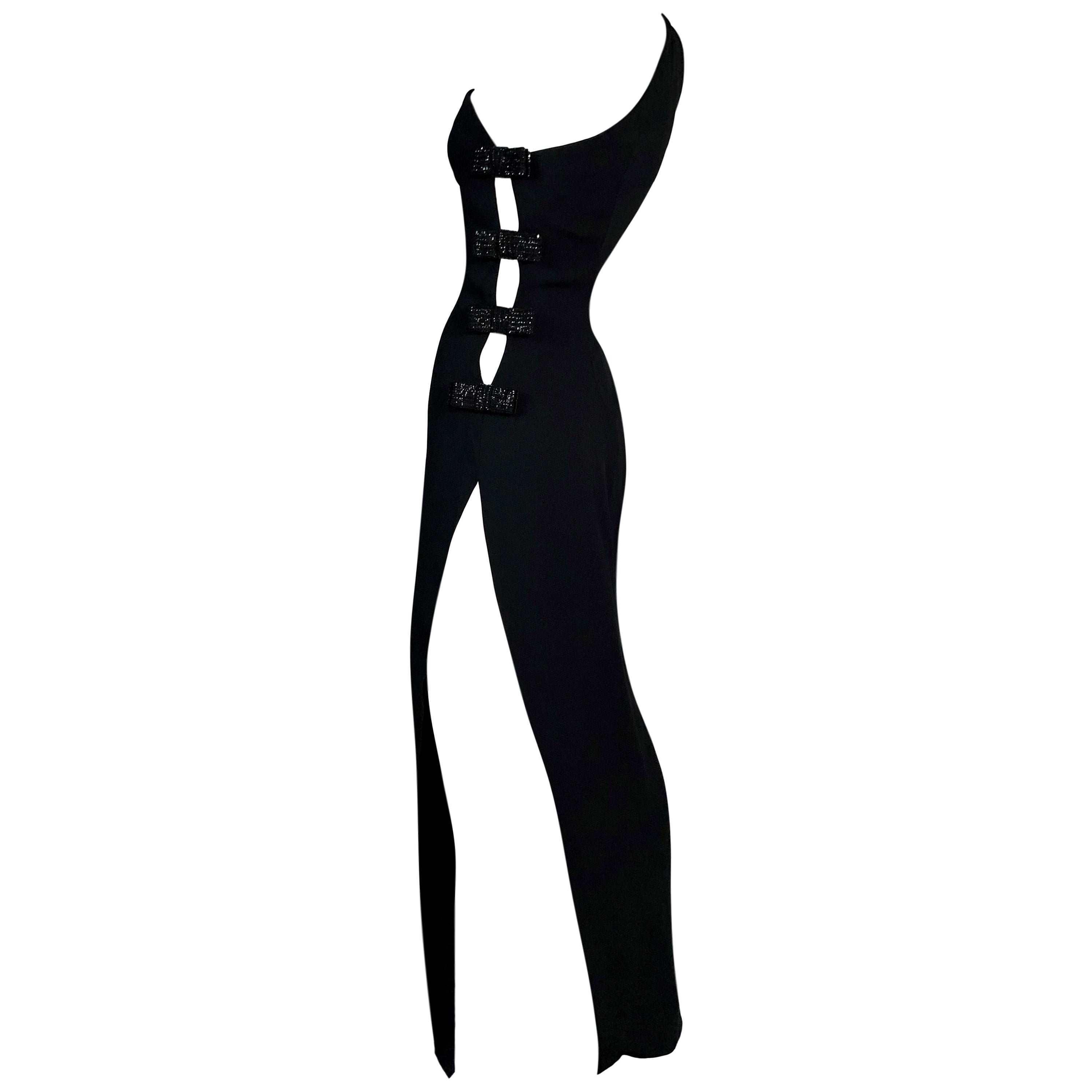 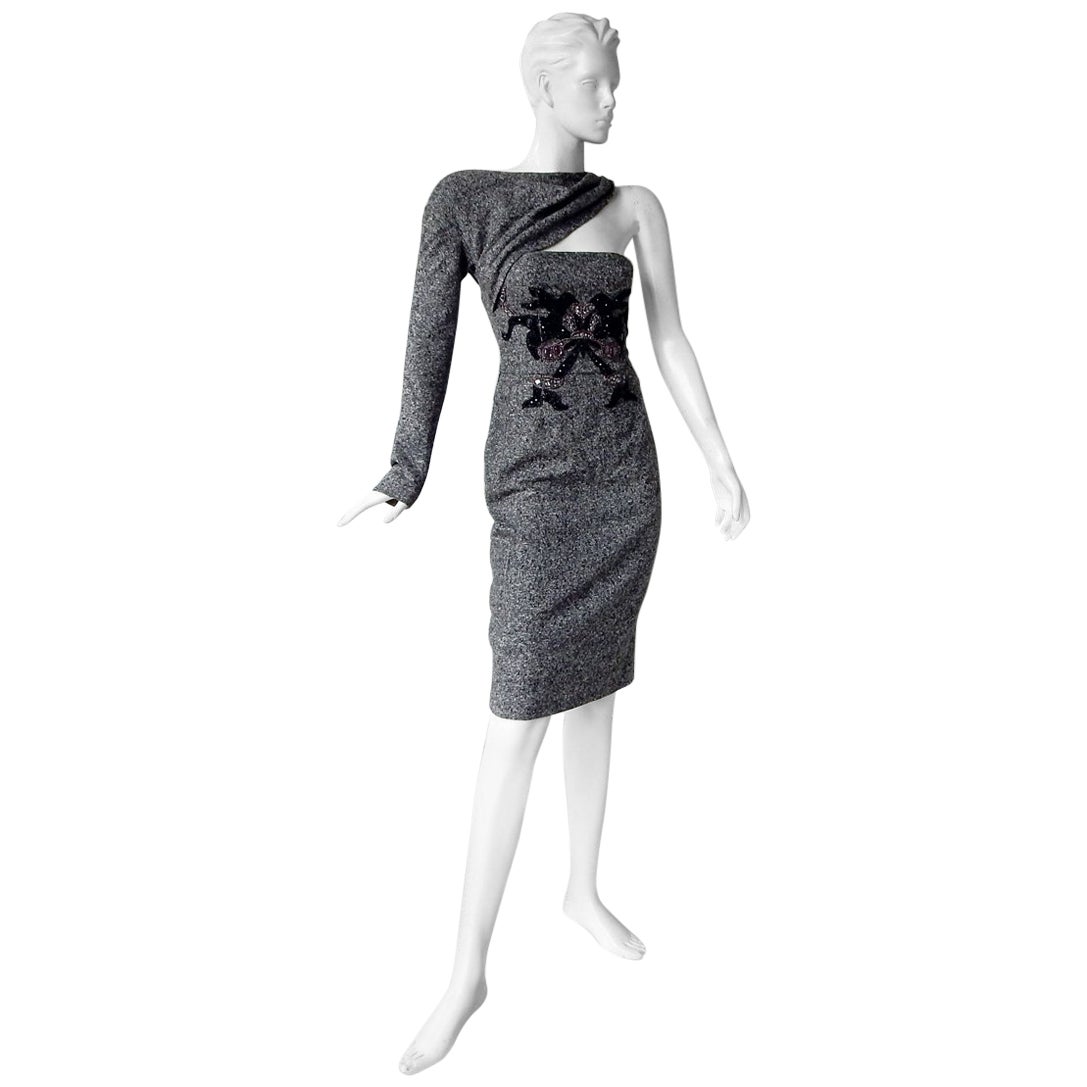 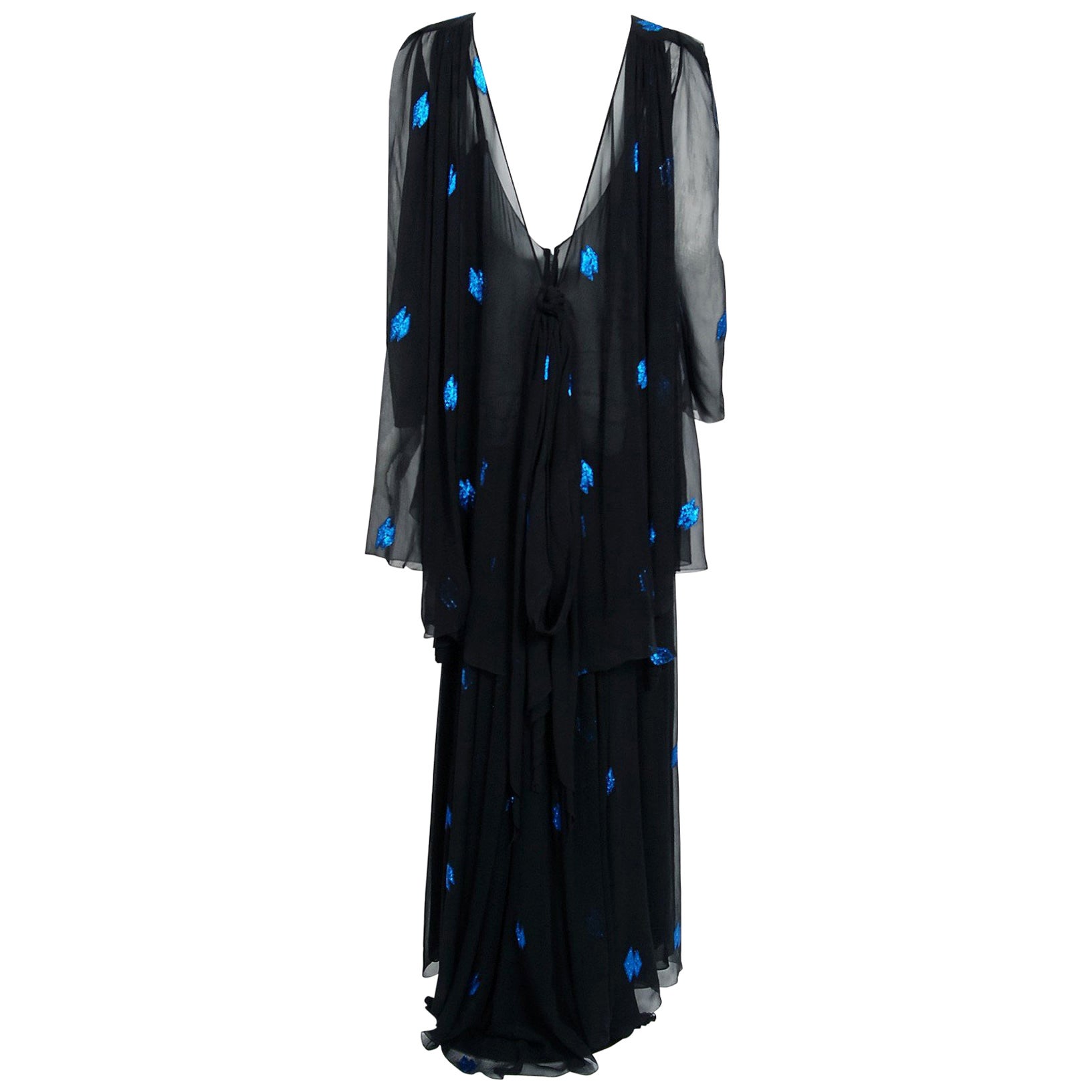 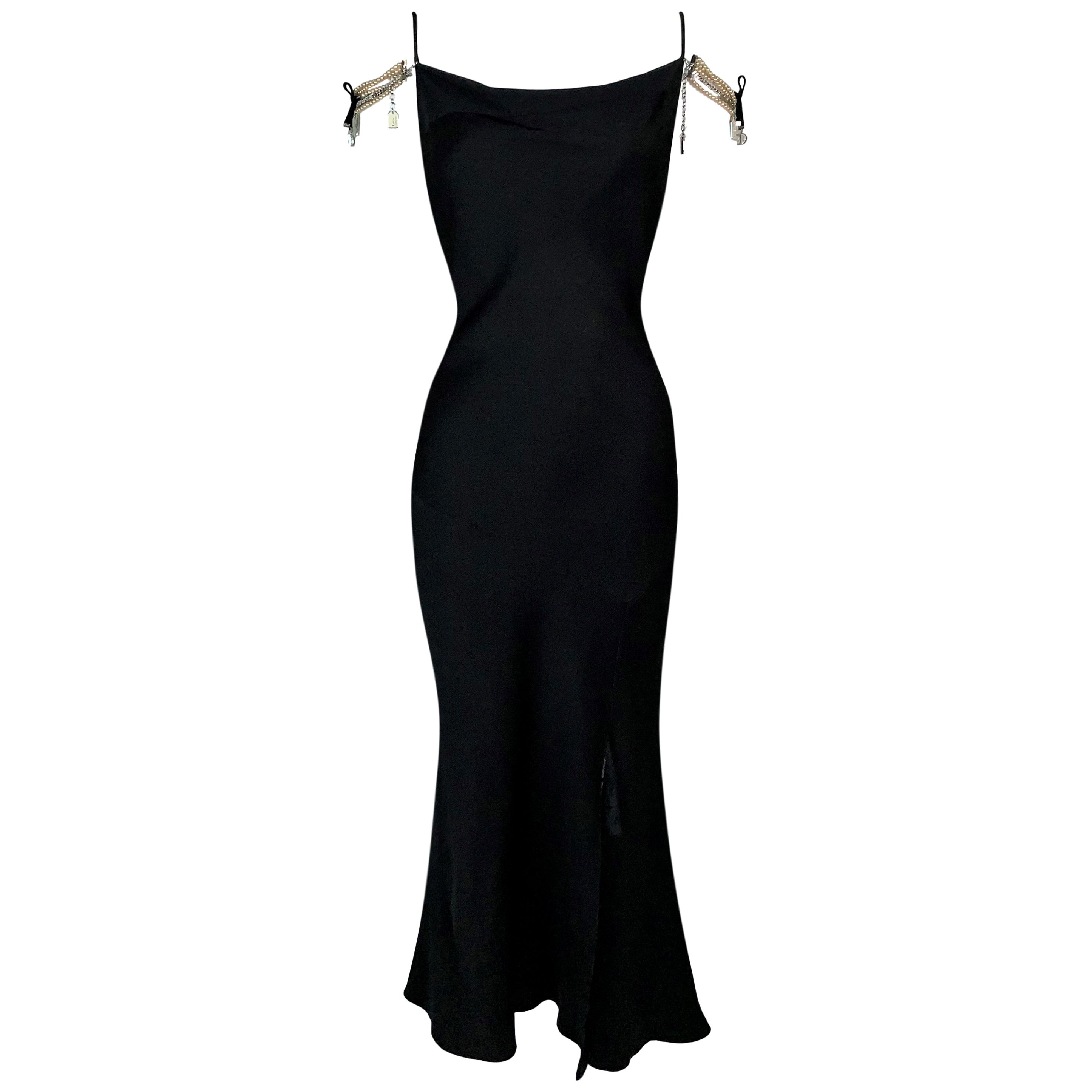 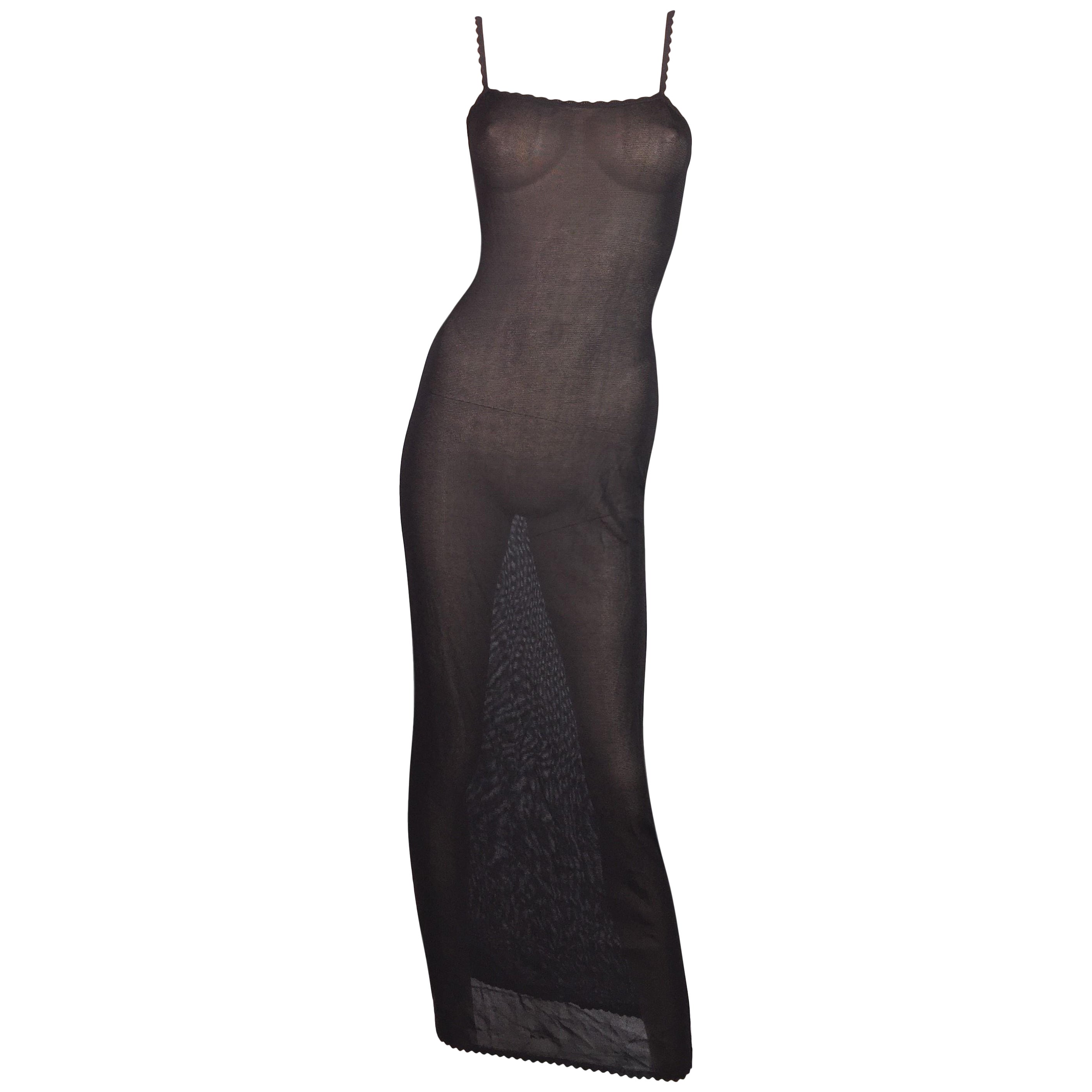 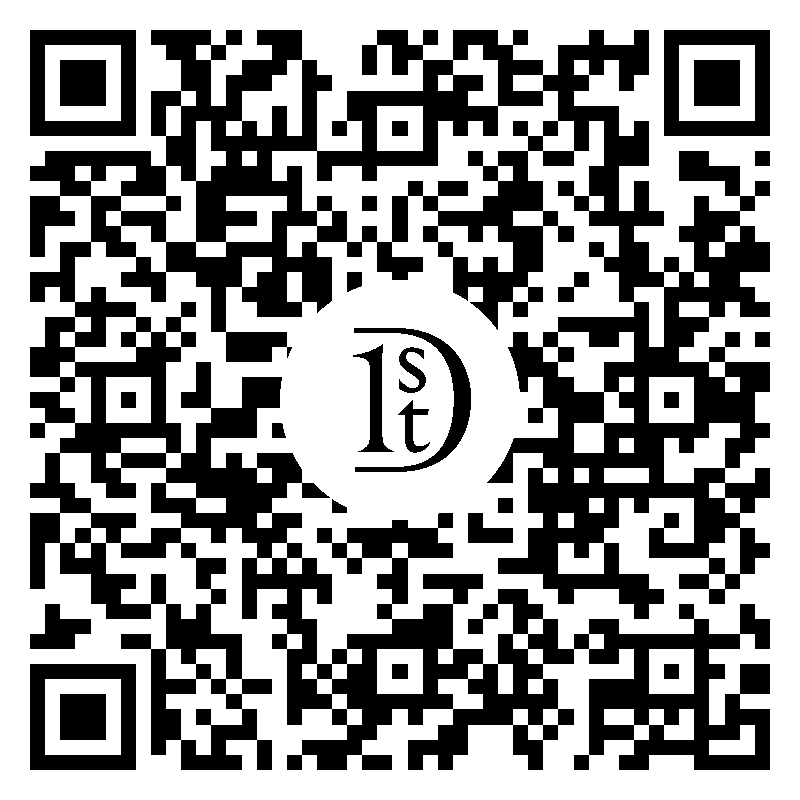 A stunning Christian Dior numbered Paris boutique polka-dot stretch hourglass dress dating back to the spring-summer 1990 collection. Christian Dior designed under his own name for only a decade, but his influence is everlasting. When the talented Gianfranco Ferré took over as head designer, he continued the Dior tradition of feminine design. This finely crafted flirty party dress is a perfect example of his talent. The fabrics used for this garment are ultra flattering; black and white double-sided stretch mesh with semi sheer polka-dot silk tulle skirting. The bodice has an ultra seductive corset style plunge with cut-out backside. I love the polka-dot trimming which ties the whole look together flawlessly. Just look at that full two-tier mini skirt! The hourglass silhouette mixed with playful print is a wonderful nod to 1950's femme-fatale pin up fashion. An adorable piece of fashion history that would be perfect for any modern event. Measurements Bust:32-36 inches (due to mesh stretch) Waist:25 inches (hook can be moved an additional 2 inches) Hips:up to 42 inches Total Length:35 inches This stunning Christian Dior Paris numbered dress in excellent condition with no rips, holes or stains. The workmanship is immaculate. Perfectly working hidden back zipper and bustier style back bodice metal hooks. Highly wearable and an investment piece that will continue to increase in value.


This was the start of Dior’s rise in the city’s creative milieu, where he befriended Pablo Picasso and Jean Cocteau. After seven years as an art dealer, Dior retrained as a fashion illustrator, eventually landing a job as a fashion designer for Robert Piguet, and in 1941, following a year of military service, he joined the house of Lucien Lelong. Just five years later, with the backing of industrialist Marcel Boussac, the ascendant Dior established his own fashion house, at 30 avenue Montaigne in Paris. There, the visionary couturier would alter the landscape of 20th century fashion.


Just two years after the end of World War II, the fashion crowd and the moribund haute couture industry were yearning, comme tout Paris, for security and prosperity, desperate to discard the drab, sexless, utilitarian garb imposed by wartime deprivation. They needed to dream anew.


And Dior delivered: He designed a collection for a bright, optimistic future. “It’s quite a revolution, dear Christian!” exclaimed Carmel Snow, the prescient American editor-in-chief of Harper’s Bazaar, famously proclaiming, “Your dresses have such a new look.” The press ran with the description, christening Dior’s debut Spring/Summer haute couture collection the New Look. “God help those who bought before they saw Dior,” said Snow. “This changes everything.”


Dior’s collection definitively declared that opulence, luxury and femininity were in. His skirts could have 40-meter-circumference hems, and outfits could weigh up to 60 pounds. They were cut and shaped like architecture, on strong foundations that molded women and “freed them from nature,” Dior said. Rather than rationing, his ladies wanted reams of fabric and 19-inch waists enforced by wire corsets, and the fashion world concurred. The debut got a standing ovation.


In the subsequent decade, Paris ruled as the undisputed fashion capital of the world, and Christian Dior reigned as its king. With the luxuriously full skirts of his New Look, suits and his drop-dead gorgeous evening dresses and ball gowns worthy of any princess — an expansive collection of which can be found on 1stDibs — Dior gave women the gift of glamour they’d lost in the miserable years of war.

About the Seller
5 / 5
Located in Beverly Hills, CA
Recognized Seller
These prestigious sellers are industry leaders and represent the highest echelon for item quality and design.
Established in 2004
1stDibs seller since 2012
599 sales on 1stDibs
Typical response time: <1 hour
More From This Seller
View All From Seller