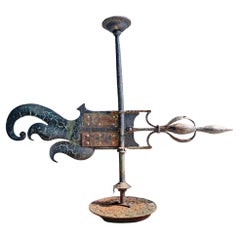 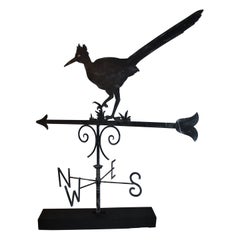 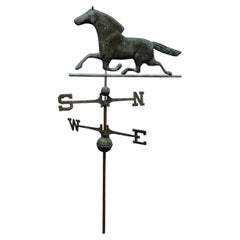 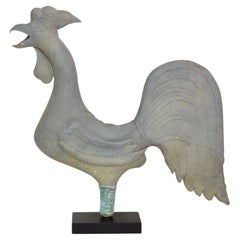 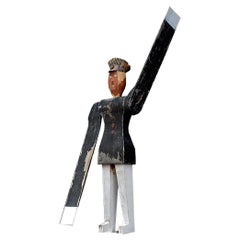 Early 20th Century Folk Art Rooster Weathervane on Custom Wall Mount
Located in Chicago, IL
A wonderfully whimsical early 20th century Folk Art hand-wrought iron weathervane with a rooster standing on the tip of the arrow, a greek cross at top, and a wreath at the back of t...
Category

19th C Hollow Body Eagle Weather Vane
Located in Los Angeles, CA
This fine 19th c patinaed eagle weather vane was found in New England. The iron base is a custom made stand. The condition is very good on this early fine with no dents or holes. Won...
Category

19th Century Dragon Weathervane
By Cushing and White
Located in Nantucket, MA
The body is molded copper with sheet coper wings, the tongue is made of zinc, with late 19th early 20th in service gilding thoughout the body and sphere. The rod and shaft have a gre...
Category

18th Century Copper and Iron Estate Made Weather Vane
Located in Hastings, GB
An incredible large estate made weather vane on a later base. Beautifully worn and with a wonderful patina, the vane features honest later repairs in copper to the centre, dating to ...
Category

Early 20th C Sailboat Weather Vane
Located in Los Angeles, CA
This fun small scale copper / patina sailboat weather vane is in great as found condition. The base is a custom made iron mount. This vane was found in New England and was on a guest...
Category

French Late 19th Century Weathervane
Located in Atlanta, GA
A sensational later 19th century girouette - weathervane of a Galleon found in the South of France. The galleon is expertly crafted from beautifully patina'd copper and rests in its ...
Category

Pair of Antique American Lightning Rods
Located in Hingham, MA
Sculptural pair of American lightning rods dating from the 1870's. They still maintain their original copper skin on its wrought iron twist rod staff which by now has developed a be...
Category

Horse Weathervane with Gilt Surface on Display Stand
By J.W. Fiske & Company
Located in Atlanta, GA
A trotting horse weathervane likely modeled after "Ethan Allen" with its original mount and displayed on a custom stand in a slightly upslope manner. The horse with full molded coppe...
Category

19th Century Running Horse Gilt Weather Vane
Located in Port Jervis, NY
Fabulous example of a 19thc weathervane which served well and survived it's time on a country roof top. A few dings and some wear by the front leg. Head is cast zinc. Was touched up...
Category

Whether it’s mounted on a mantel or hung flat against a wall in the living room or entryway, antique and vintage weathervanes can prove a striking decorative touch in your home.

Weathervanes are instruments that indicate wind direction. They are also referred to as wind vanes, wind gauges or weathercocks, but regardless of what we call them, most weathervanes will perform in the same way.

Weathervanes typically consist of a gravity-centered rotating horizontal arrow or other structure that is mounted on a stationary vertical axis. When the wind blows, the horizontal piece moves freely, rotating to indicate the wind’s direction as well as its speed. Andronicus, a Greek astronomer, crafted one of the earliest iterations of the weathervane in approximately 48 B.C. His bronze design featured the head and torso of a man but the tail of a fish. Later, weathervanes could be seen atop church steeples and towers throughout Europe. The oldest weathervane is Italian in origin and assumes the silhouette of a rooster. It is a copper weathervane, said to have originated between 820 and 830 A.D. and can be found in the Museo di Santa Giulia in Brescia, Italy.

Today, antique and vintage weathervanes are collectible sculptural works in any interior. They are celebrated for their place in the rich tradition of American folk art as well as their technological innovation.

Over the course of the 19th century, as the popularity of and demand for weathervanes broadened in the United States, blacksmiths, farmers and other tradesmen created weathervanes in the forms of cows, horses and other animals for barns in rural farmland. Commercial manufacturers in major cities took to producing all manner of weathervanes that were marketed in mail-order catalogs of the era.

When decorating with weathervanes, if you’ve decided against mounting your cast-iron painted horse weathervane on your mantel to complement your farmhouse-style decor, there are other options. You could repurpose your vintage weathervane as a provocative lighting fixture and hang it above your dining-room table, or dot the walls of your mudroom with weathervanes where they might double as racks for coats or other outerwear. Create a gallery-style hang as a focal point in your living room, grouping weathervanes that share a single theme or material. Because weathervanes have taken on many forms over the years, you’re likely to find a style that best fits your personality.

If positioned outdoors, a painted or varnished wood weathervane will resist harsh weather conditions, while copper weathervanes will resist erosion and usually come at an affordable price.

On 1stDibs, find a collection of antique and vintage weathervanes and other folk art today.