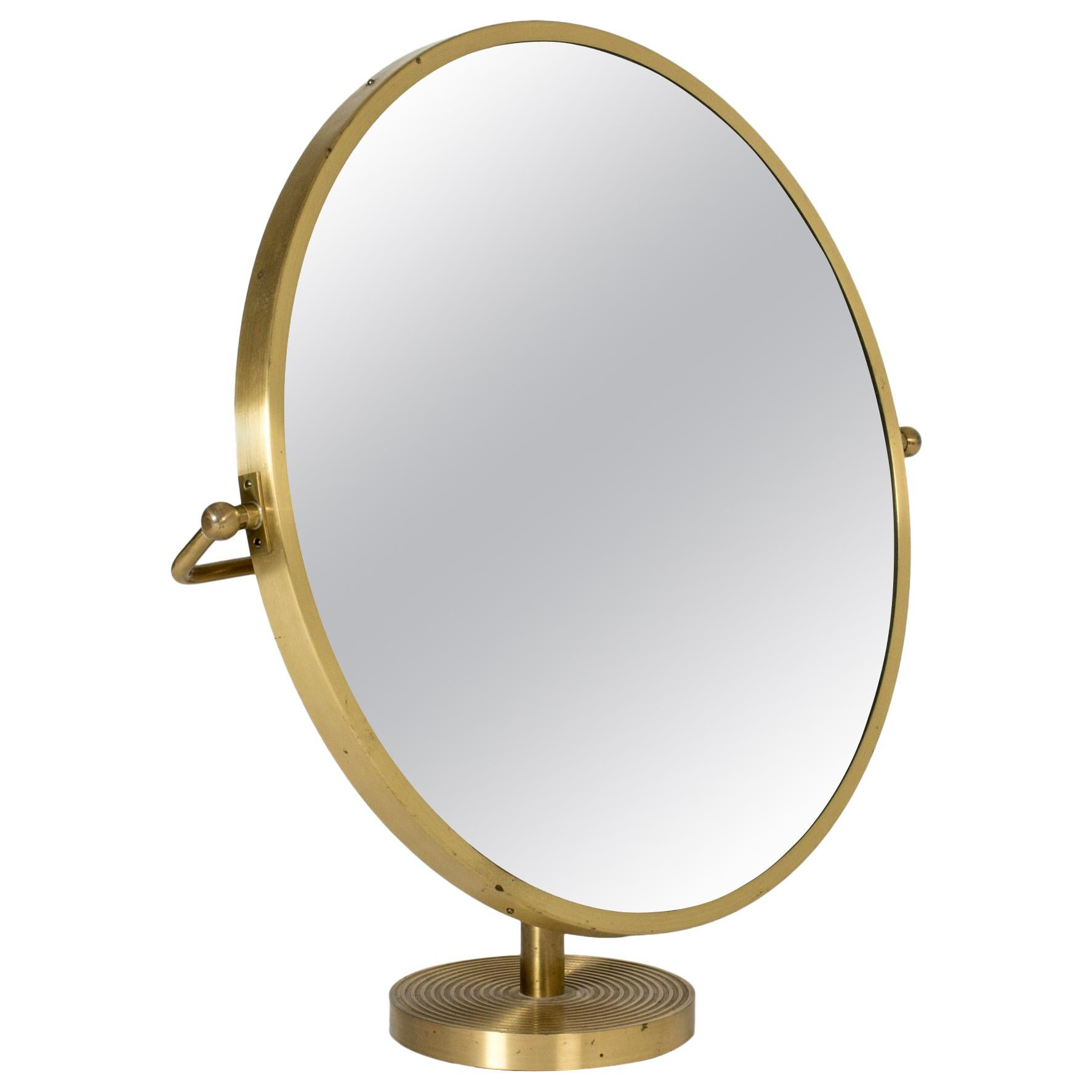 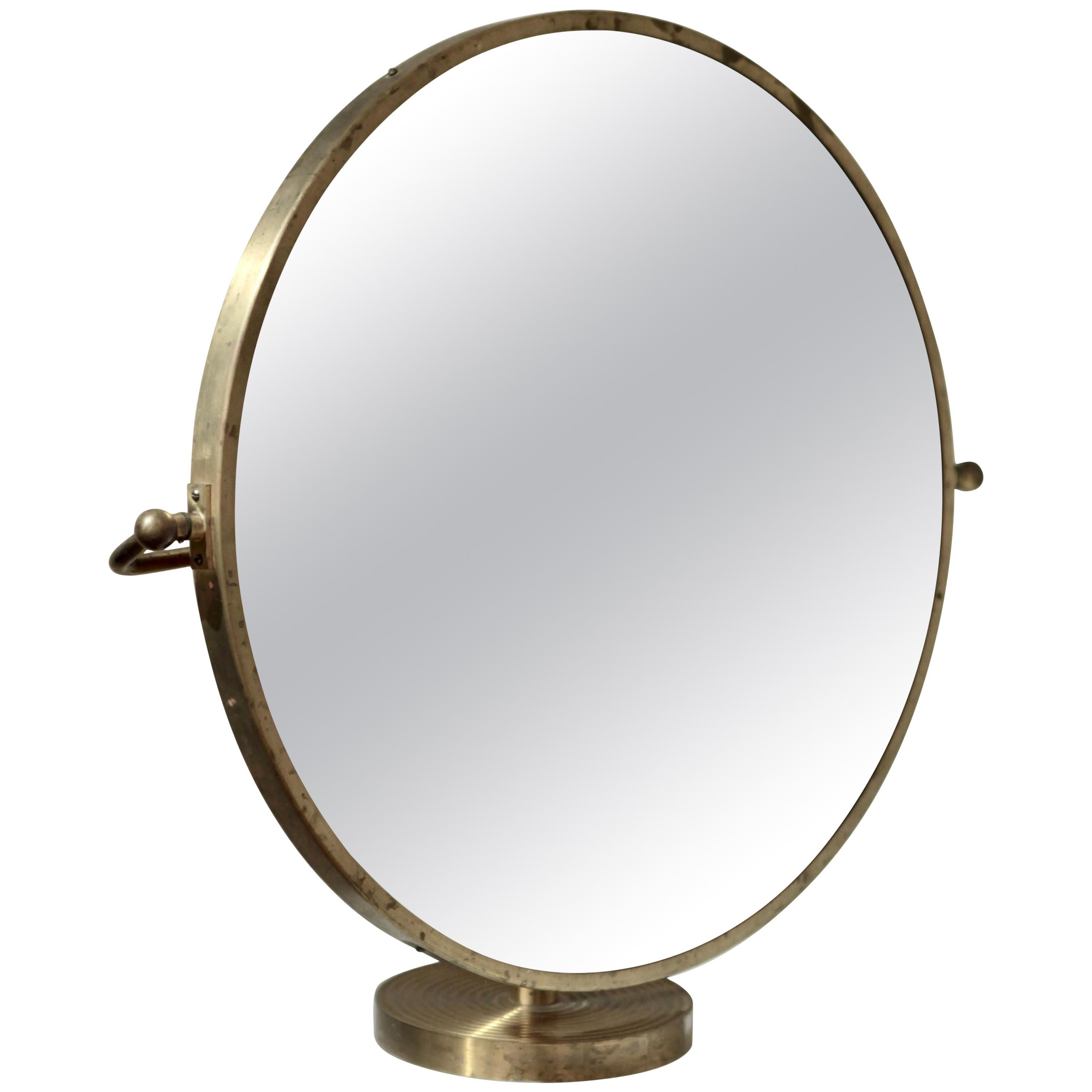 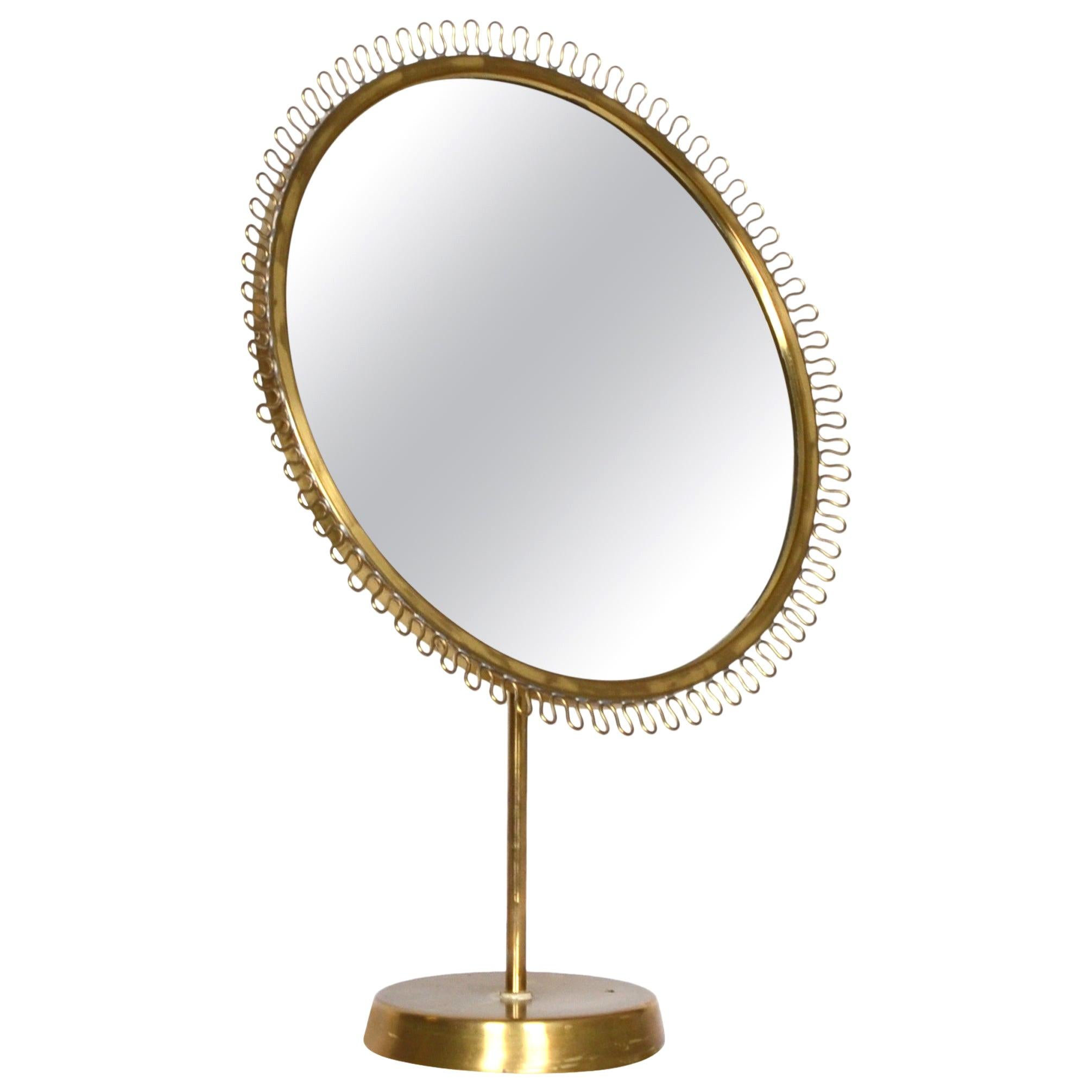 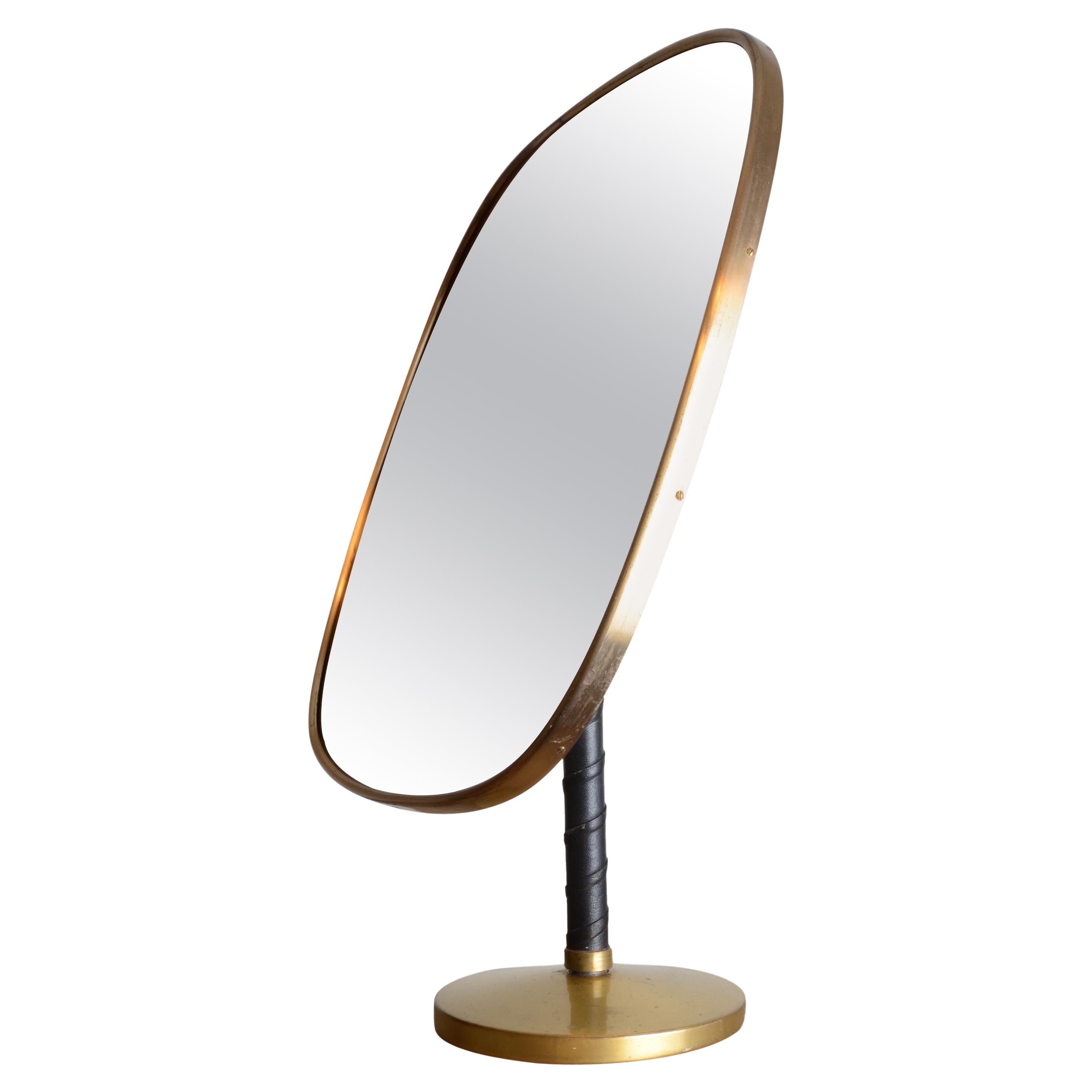 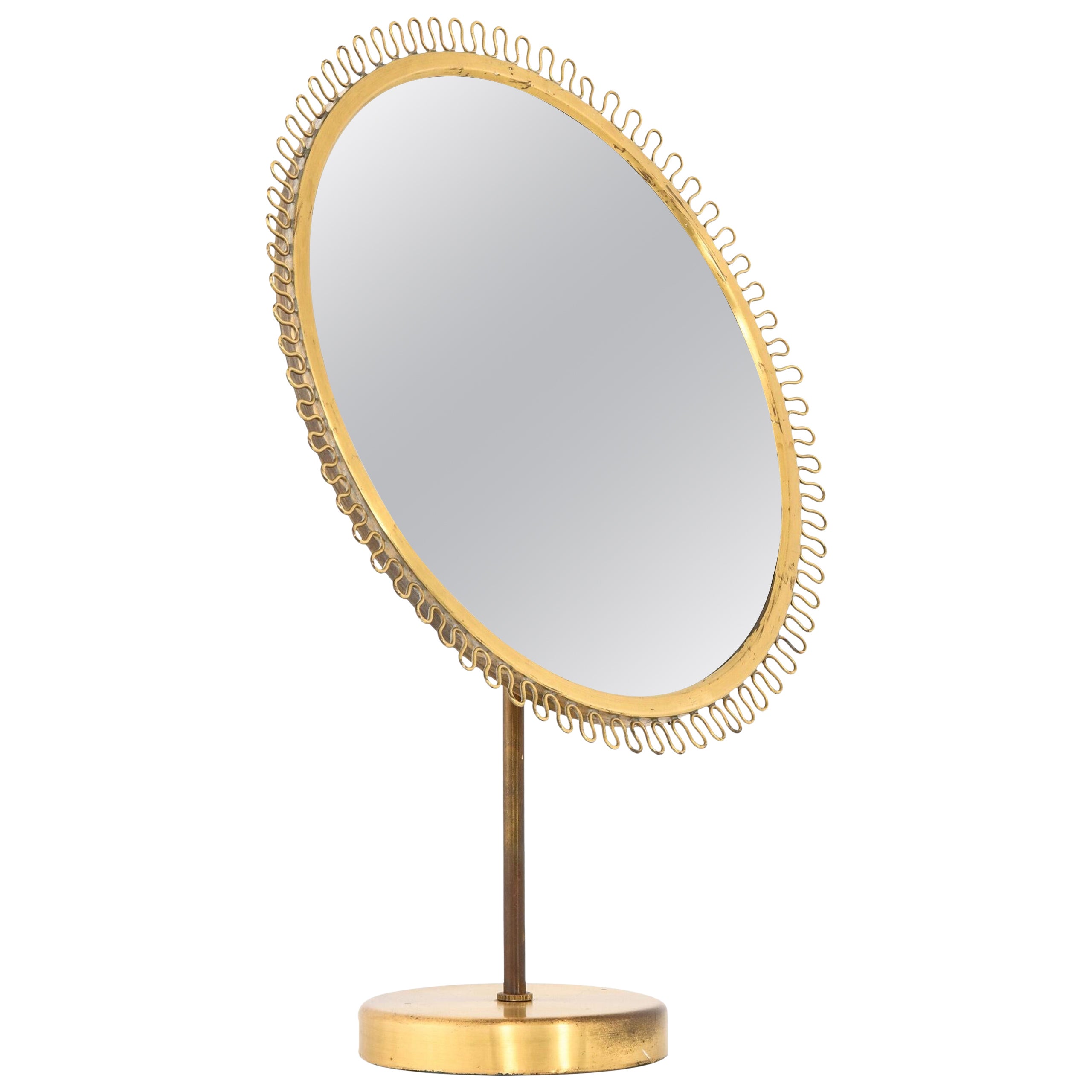 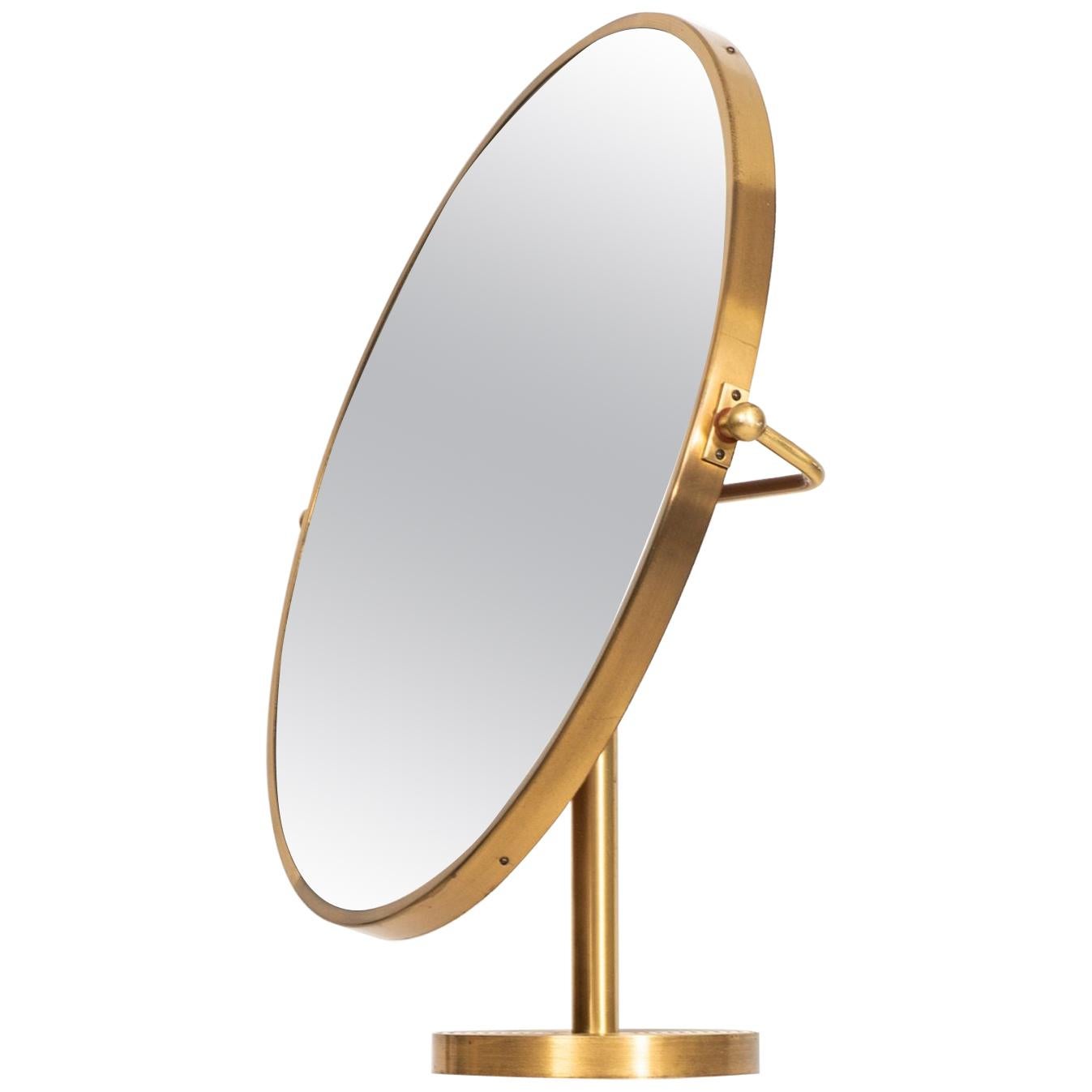 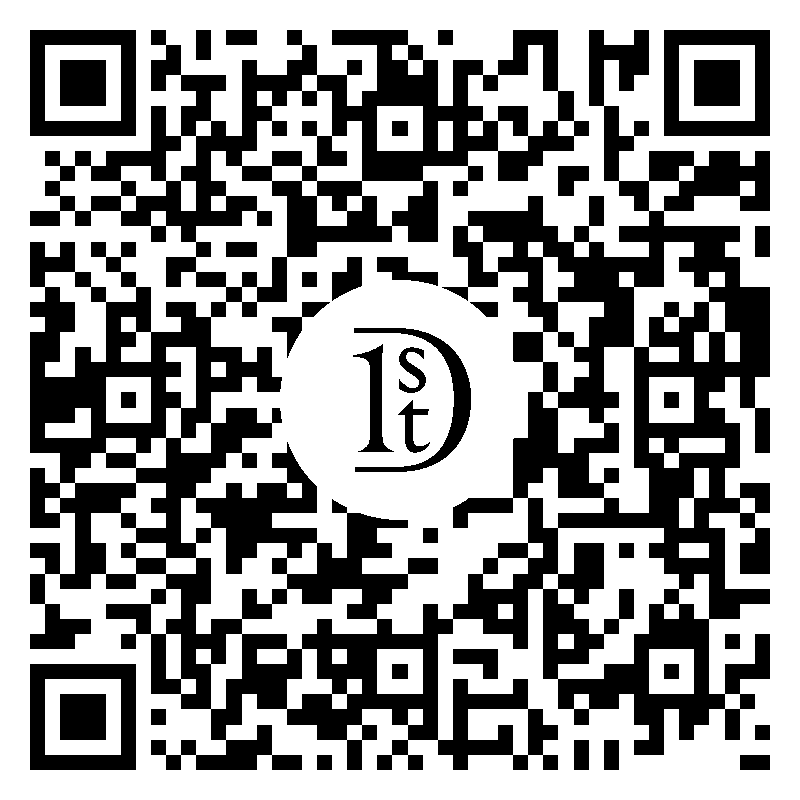 Oversized, round brass table mirror by Josef Frank with heavy brass patina. Clean, elegant lines. Beautiful embossed pattern of stripes on the base of the mirror, wooden back. 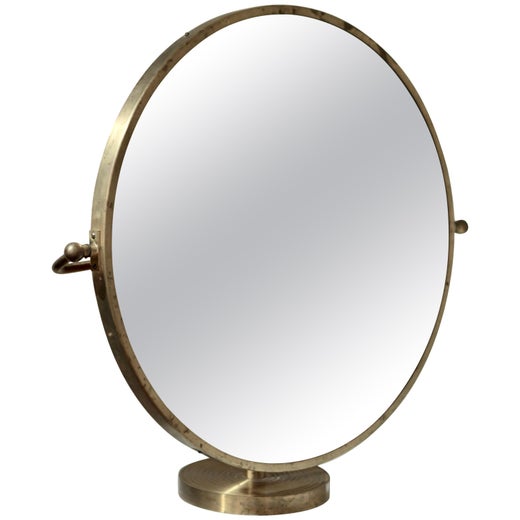 Today, the name Svenskt Tenn is associated around the world with the vibrant, modernist textiles and furniture of Josef Frank, who was the Swedish company’s chief designer in the mid-20th century. But the term “svenskt tenn” actually means “Swedish pewter,” and the very first goods the company sold were stylish pewter objects, such as an elegant 1927 candelabra found in the collection of the Saint Louis Art Museum, or a sleek, understated mirror in the collection of the National Museum of Fine Arts. These pieces were designed to appeal to discerning but price-conscious shoppers in 1920s-era Stockholm.

Art teacher and interior designer Estrid Ericson (1894–1981) partnered with pewter artisan Nils Fougstedt (1881–1954) to establish Svenskt Tenn in 1924, and their creations quickly gained a reputation for high quality and affordability, winning a gold medal at the International Exhibition of Modern Decorative and Industrial Arts in Paris in 1925 — the design fair that brought global attention to the Art Deco style.

The experience of renovating her own apartment in the 1920s exposed Ericson to Swedish functionalism — or funkis, as it was known in Sweden — a branch of modernism that advocated uncomplicated forms, subdued colors and utility. She was inspired to open an interior design department at Svenskt Tenn, and in 1930 the firm introduced its first line of furniture.

Selections included items produced by the companies Gemla and Bodafors, as well as original designs by Ericson and the architects Uno Åhrén and Björn Trägårdh, who had worked together on the redesign and expansion of the showroom. The trio’s furniture was displayed at Stockholm’s Galleri Modern in 1931, where it was met with praise from critic Gotthard Johansson, a leading proponent of Swedish functionalism. Johansson admired the “pure lines” and “modern austerity” of the furniture, establishing Svenskt Tenn as an important voice in Swedish design.

Frank’s textiles are like a visual catalogue of exotic plants and flowers, geological formations and maps, inspired in part by Ericson’s world travels and by Frank’s love of folk art. Svenskt Tenn continues to sell fabric, wallpaper and household goods, many of which sport variations of Frank's signature botanical motifs. Antique and vintage Svenskt Tenn pewter, lighting, furniture, textiles and decorative objects are generally priced anywhere from $2,500 to $25,000 depending on scale and condition.

The tenets of Scandinavian modernism are as fresh and relevant now as they were in the 1950s — light-filled and airy rooms with white walls are perfect settings for comfortable furniture upholstered in one of Josef Frank’s indelible patterns, and nearly a century since its founding, the signature aesthetic of Svenskt Tenn remains as distinctive and timeless as ever.

1stDibs Buyer Protection Guaranteed
If your item arrives not as described, we’ll work with you and the seller to make it right. Learn More
About the Seller
5.0
Located in Stockholm, Sweden
Recognized Seller
These prestigious sellers are industry leaders and represent the highest echelon for item quality and design.
Platinum Seller
These expertly vetted sellers are 1stDibs' most experienced sellers and are rated highest by our customers.
Established in 1973
1stDibs seller since 2015
361 sales on 1stDibs
Typical response time: <1 hour
More From This SellerView All
People Also Browsed
You May Also Like