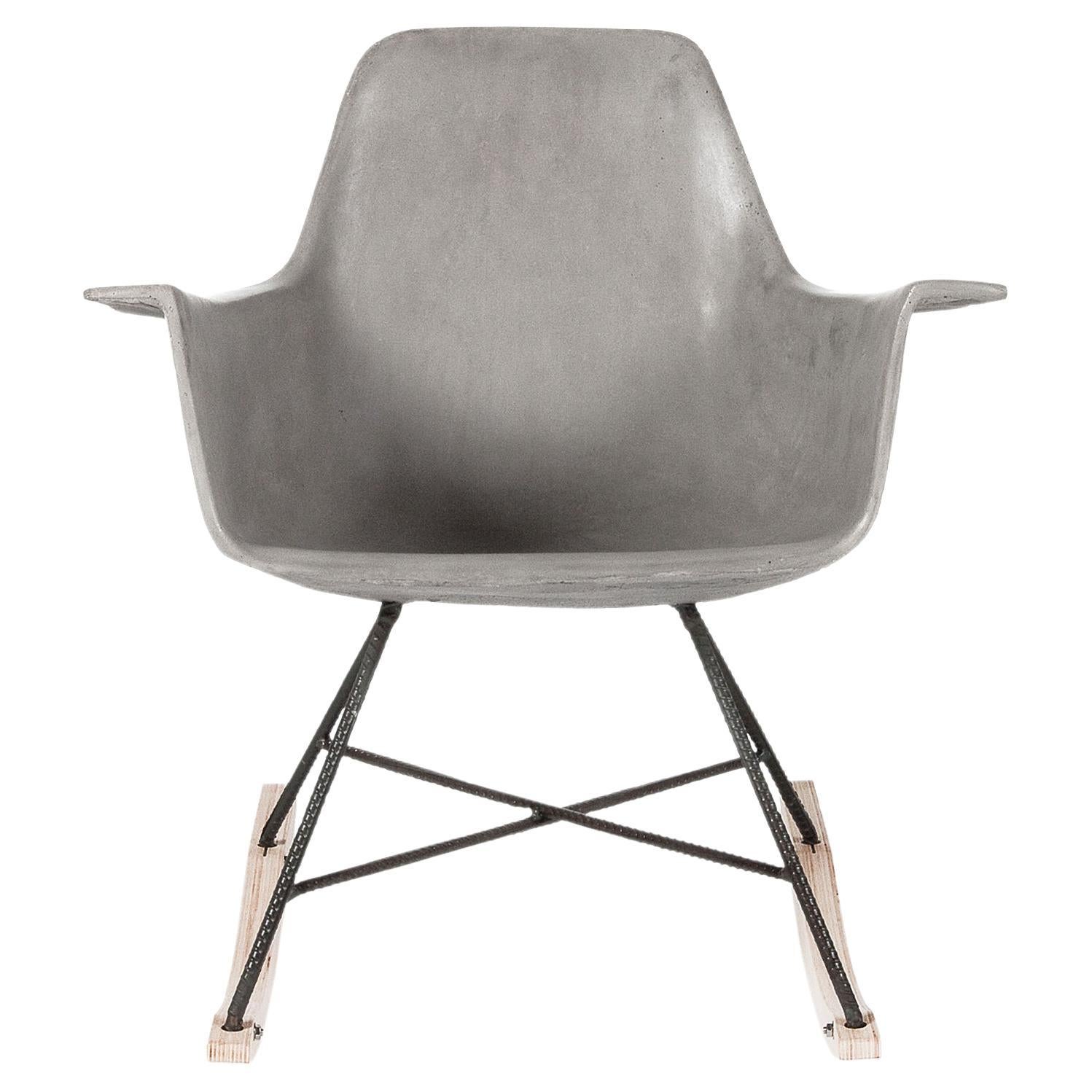 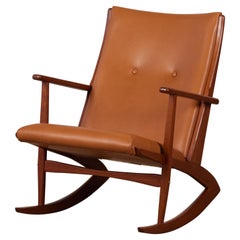 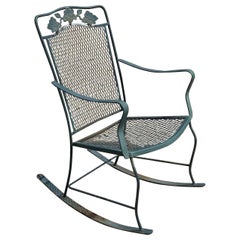 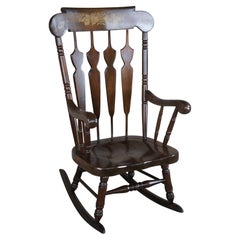 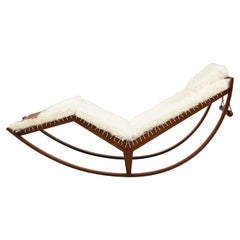 21st Century Blue Rolling Stone Armchair in Aluminium Modular Seat for outside
By Andrea Barra
Located in Milano, IT
It is an armchair, in Aluminium, for outside. with 4 different seats inside, you just have to roll it, and you will find a seat, higher, a lower, a deeper and a more sporty one, a...
Category

Vintage Rocking Chair in the Style of Renato Zevi, 1970s
By Renato Zevi
Located in taranto, IT
Original rocking chair from the 70s, probably attributed to renato zevi design, on a white lacquered metal structure and fabric upholstery Good overall condition, as shown in the ...
Category

Vintage Rocking Chair in the Style of Renato Zevi, 1970s

Pair of Midcentury Cote d'Azur Rattan and Bamboo Italian Rocking Chairs, 1960s
Located in Roma, IT
Pair of elegant midcentury French Riviera rattan and bamboo rocking chairs. This fantastic set was designed and manufactured in Italy during the 1960s. The chair has a solid ratta...
Category

Hans Wegner Oak Rocking Chair
By A. Mikael Laursen, Hans J. Wegner
Located in Minneapolis, MN
Professional, skilled furniture restoration is an integral part of what we do every day. Our goal is to provide beautiful, functional furniture that honors its illustrious past. Our ...
Category

Mid-Century Rocking Chair, by TON, 1970's
Located in Praha, CZ
Made in Czechoslovakia Made of fabric, wood Upholstery has signs of use Original condition.
Category

Victorian Oak Rocking Chair with Scottish Bobbin Turnings All over Cherub Fabric
Located in GB
We are delighted to offer for sale absolutely stunning ornately carved with Bobbin turns, Rocking armchair with Cherub stitched upholstery This is pretty much the finest rocking ...
Category

Carl Gromoll Sculptural Rocking Chair, 1983
By Carl Gromoll
Located in Pasadena, CA
Unique by its incredible shape, wood use, and comfort, the rocker was made by Wisconsin woodworker Carl Gromoll (b. 1950). It is a statement piece!, signed and dated 1983 under the...
Category

Rocking Chair in Oak and Sheepskin by Hans Wegner, 1950s

Bentwood Rocking Chair
By Hickory Chair Furniture Company
Located in Stamford, CT
Circa early 20th century vintage bentwood rocking chair with curved seat back, floral seat cushion, and box stretcher on the base. The piece was most likely manufactured by the Hicko...
Category

Minimalist Steel and Leather Lounge Chair Rocker by Vivian Carbonell
By Vivian Carbonell
Located in Miami, FL
The 'Sway' lounge chair is a minimalistic interpretation of a rocker, cradle and/or hammock with an elegant and structured appeal. It is formed out of one solid steel plate and comes...
Category

Swing Rocking Chair in Oak, by Hans Olsen from Warm Nordic Upholstery Moonlight
By Hans Olsen
Located in Viby J, DK
The Classic swing rocking chair was designed in 1956 by the architect Hans Olsen, who conducted extensive experiments in his quest to come up with original furniture designs. The cha...
Category

Adirondack Ranch House Rocking Chair
Located in Los Angeles, CA
This is a new Adirondack rocker In the style of Thomas Moser. It also is very similar to the new Amish bentwood rocking chair.This is one of the most comfortable rocking chair.
Category

Victorian Wicker Rocker with Interlocking Circle Arms and Spider Woven Back
Located in Miami Beach, FL
This Victorian ladies rocker matches the youth chair we have also listed. The arms and back are high Victorian style. It was probably a mother's nursery chair perhaps used for nursin...
Category

Danish Cord and Beech Rocking Chair, Denmark, 1940s
Located in Utrecht, NL
A beech rocking chair, suspended in seat and back with woven paper cord. Twisted paper cord woven across an open wood frame has been used to form the seats of Danish chairs since the...
Category

The phrase “rocking chair” didn’t find its way into the dictionary until the mid-18th century. While most of the sitting furniture that we use in our homes originated in either England or France, the iconic rocking chair is a quintessentially American piece of furniture.

A Philadelphia cabinetmaker’s bill for a proto-rocking chair issued in 1742, which identified the seat as a “Nurse Chair with rockers,” is the earliest surviving evidence of this design’s humble beginnings. The nurse chair was a low side chair intended for nursing women, so giving it a soothing rocking motion made sense. Rocking chairs, which saw a curved slat affixed to the chairs’ feet so that they could be literally rocked, quickly gained popularity across the United States, garnering a reputation as a seat that everyone could love. They offered casual comfort without the expensive fabrics and upholstery that put armchairs out of many families’ budgets.

Rocking chairs are unique in that they don’t just offer a place to rest — they offer an opportunity to reminisce. The presence of one of these classic pieces stirs up our penchant for nostalgia and has the power to transform a space. They easily introduce a simple country feel to the city or bring the peaceful rhythm of a porch swing into a sheltered sunroom. Although craftsmen took to painting and stenciling varieties of the chairs that emerged in New England during the 19th century, the most traditional rocking chairs are generally unadorned seats constructed with time-tested materials like wood and metal. As such, a minimalist vintage rocking chair can be ushered into any corner of your home without significantly disrupting your existing decor scheme or the room’s color palette.

In the decades since the first rocker, top designers have made the piece their own. Viennese chair maker Michael Thonet produced a series of rockers in the middle of the 19th century in which the different curved steam-bent wood parts were integrated into fluid, sinuous wholes. Mid-century modernists Charles and Ray Eames added wooden rockers to their famous plastic shell armchair, while Danish designer Frank Reenskaug opted for teak and polished beech, introducing pops of color with small cushions (a precursor to the bold works that would follow in the 1970s and 1980s).

No matter your personal style, let 1stDibs pair you with your perfect seat. Deck out your porch, patio or parlor — browse the vintage, new and antique rocking chairs in our vast collection today. 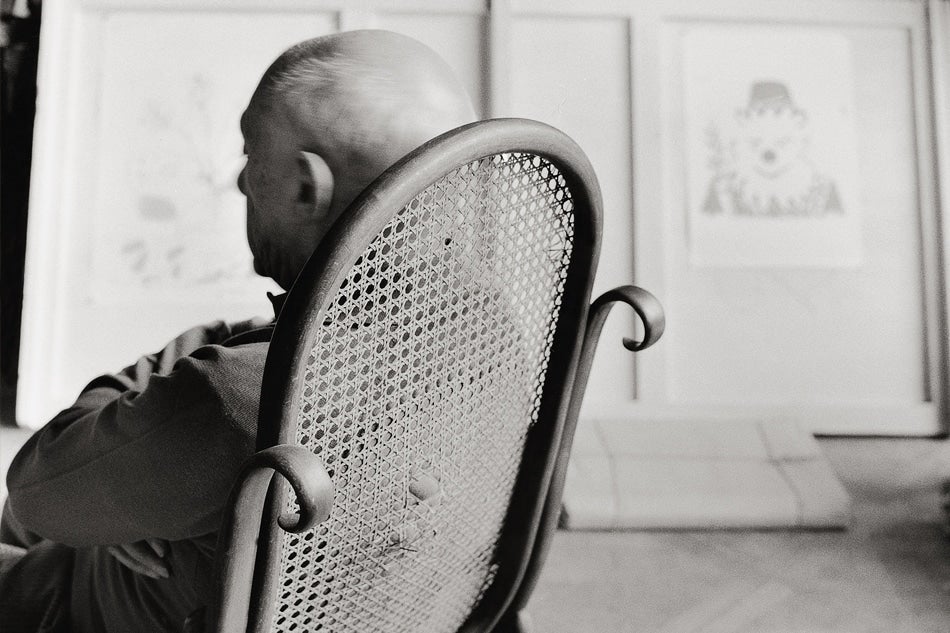 How One Chair Rocked Its Way Into Hearts and History

The noted design historian explores the origins of the rocking chair, a quintessentially American piece of furniture that is still going strong after 300 years.