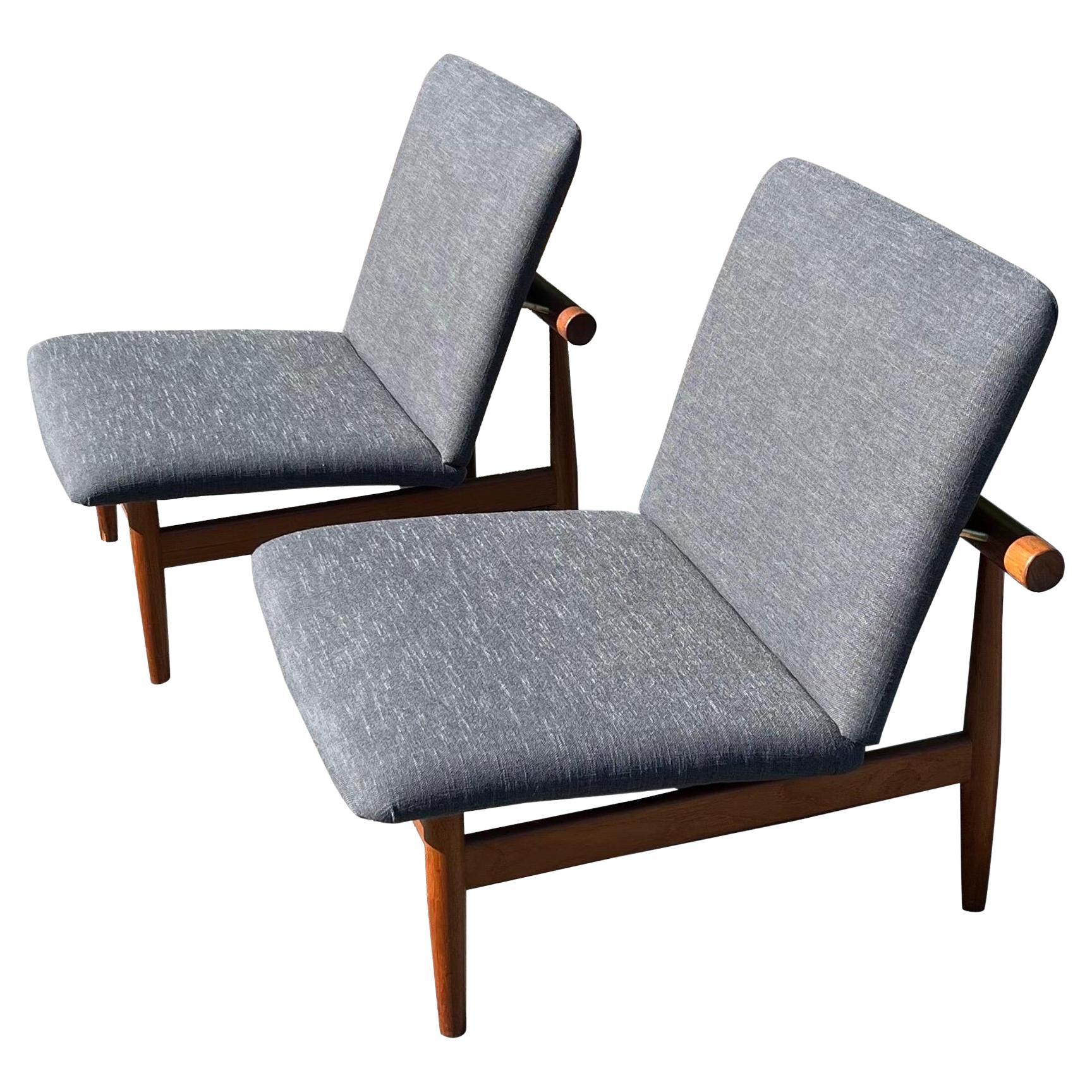 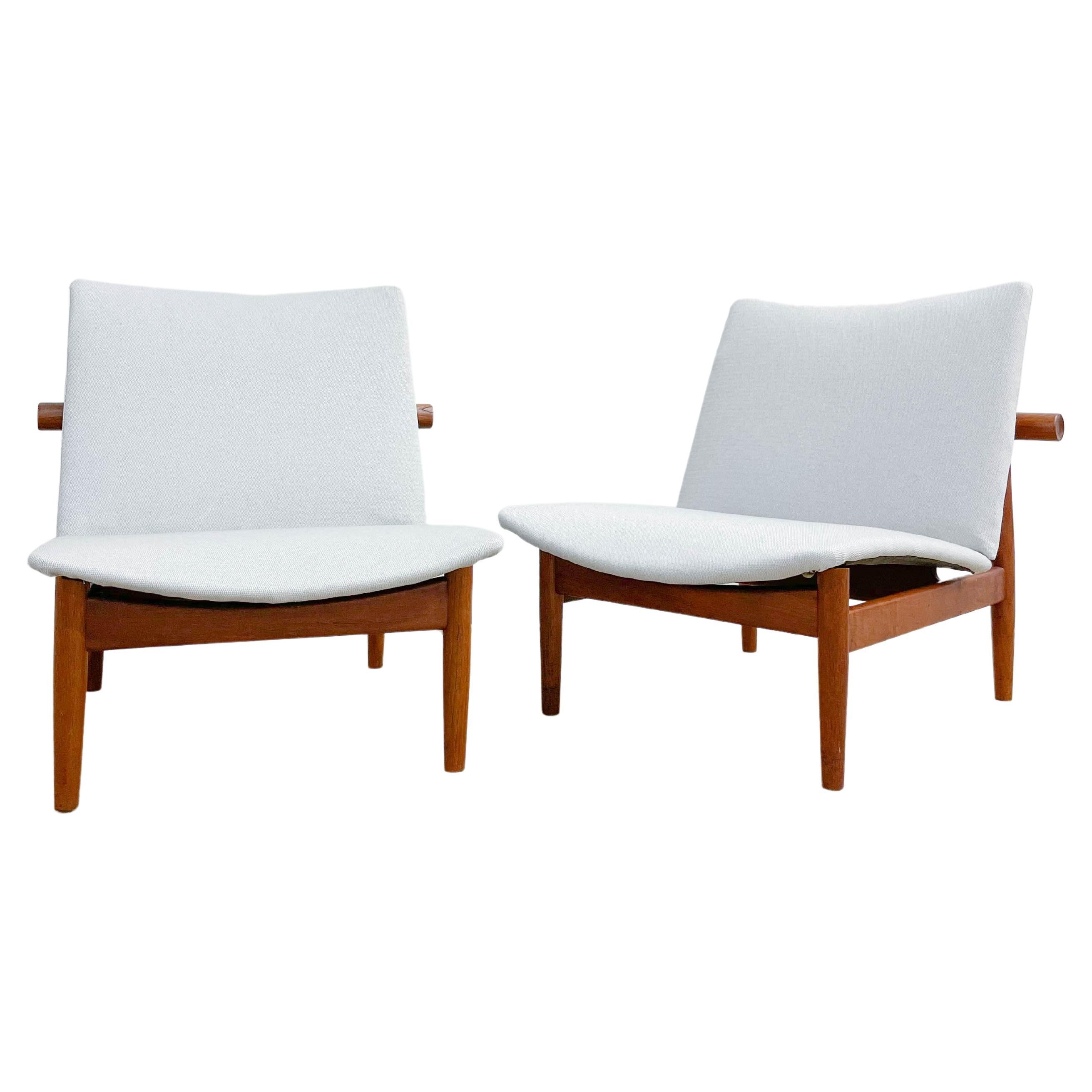 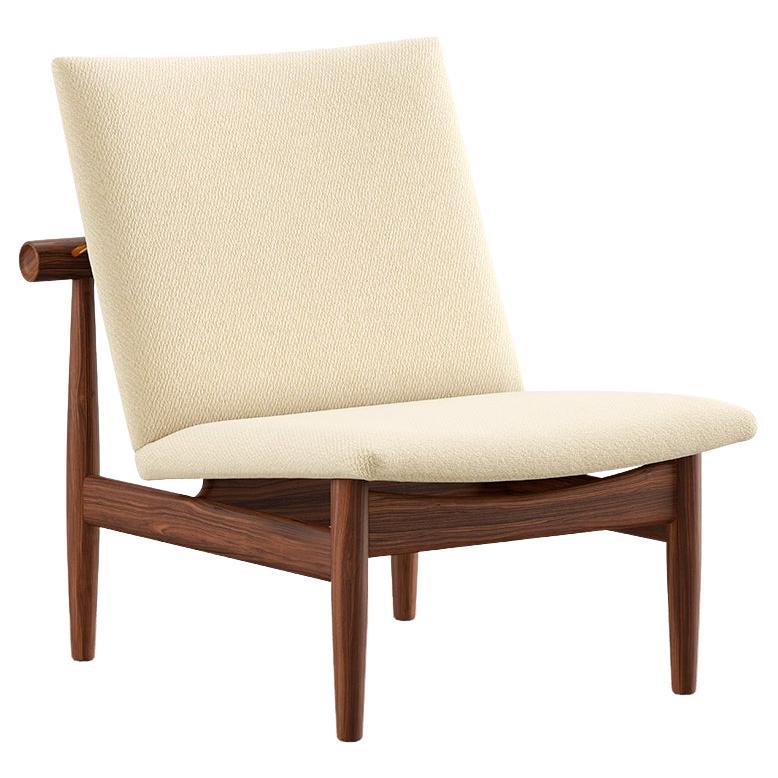 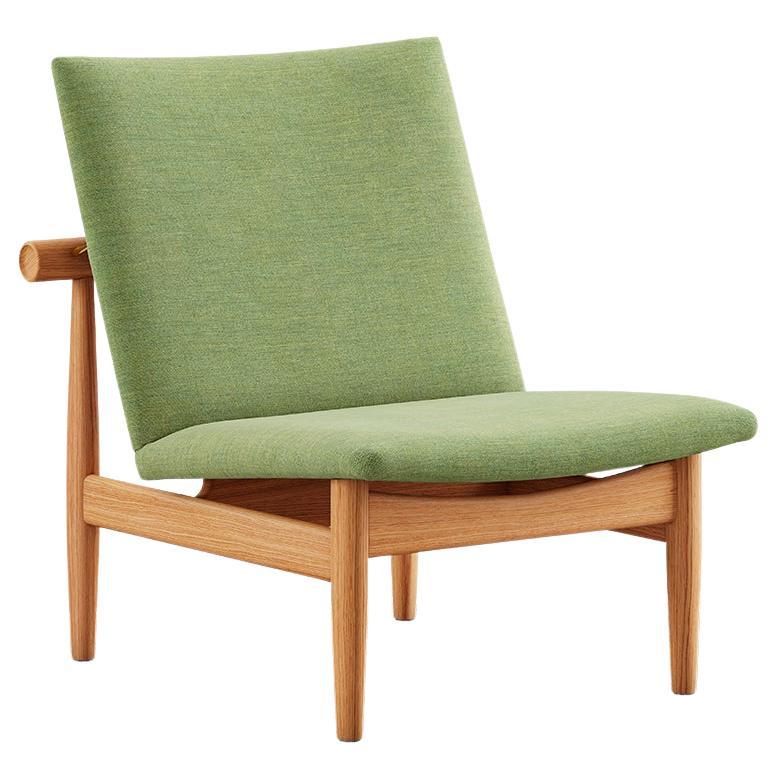 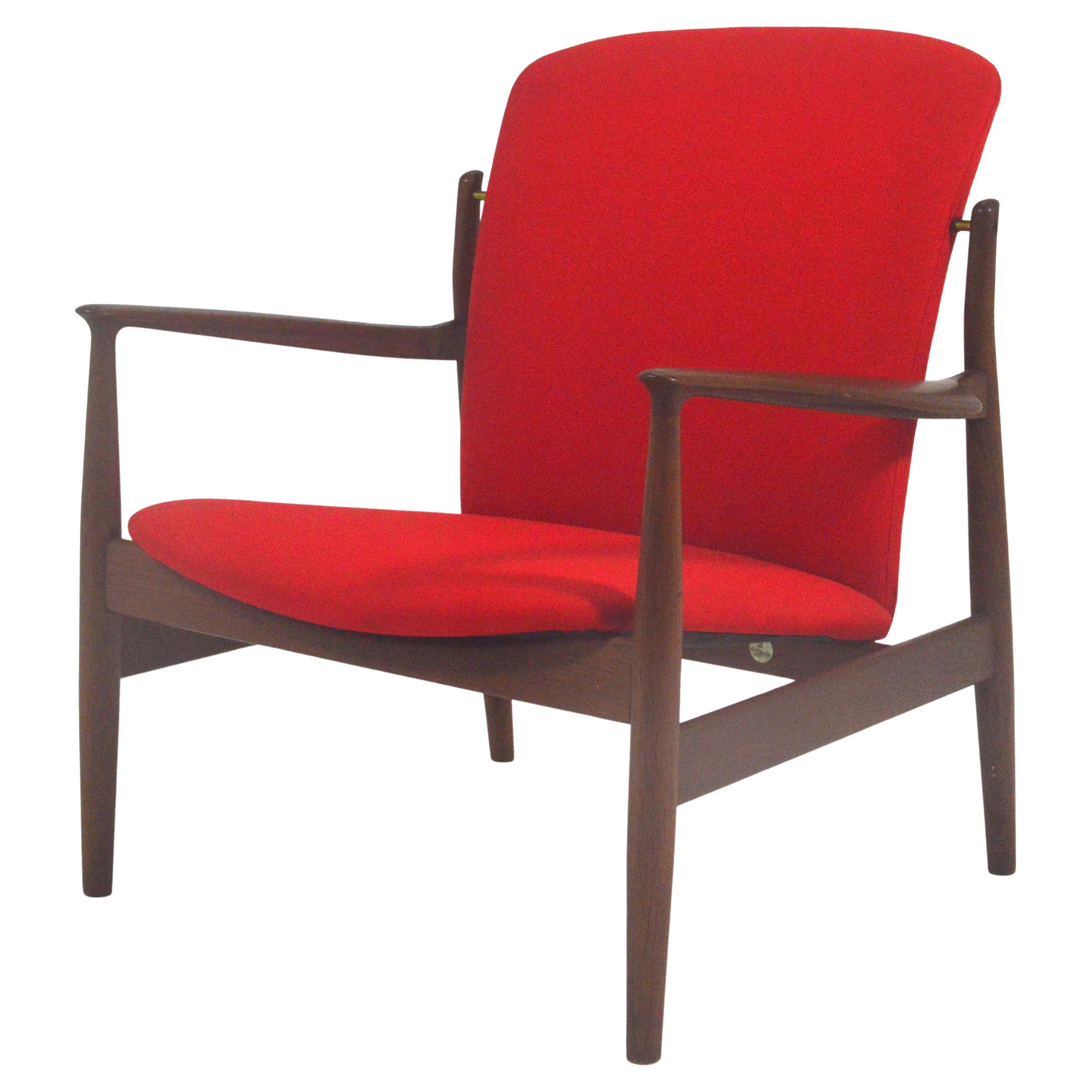 Pair of Finn Juhl "Japan" chairs designed in 1958 and produced by France and Son. I have more that needs reupholstering. Send us your fabric. Store formerly known as ARTFUL DODGER INC

Designed by Finn Juhl
In its distinctive embodiment of the East-meets-West dialogue represented in mid-century modern art and design, the Japan chair draws on the simple silhouette of the famed Itsukushima Shrine near Hiroshima, Japan. Designed by legendary Danish architect, interior designer and furniture maker Finn Juhl (1912–89) and produced by furniture manufacturer France & Søn, the chair belongs to a series that includes a two-seater sofa, a three-seater sofa and a footstool. Although he originally wanted to study art history, Juhl’s father urged him to enroll in the architecture school at the Royal Danish Academy of Fine Arts in Copenhagen. He spent a decade thereafter working for Vilhelm Lauritzen’s architecture firm, where Juhl specialized in interior design. He went on to open his own firm in 1945, establishing himself among a group of young Danish designers who sought to reinvent the national design zeitgeist. The result was the Scandinavian modernism movement beloved by many today. For his 1957 Japan chair, Juhl adopted the elegant form of a Japanese Torii, integrating its shape into the piece’s exposed low-slung wood frame and tapered legs, which support a minimalist upholstered backrest and seat. While many mid-century designers had the future in mind, Juhl looked to the past. Today the Japan chair, along with Juhl’s entire body of work, is produced exclusively by the House of Finn Juhl, an offshoot of Danish furniture company One Collection. His designs are particularly popular in Japan; there is a replica of his home in the city of Gifu and a House of Finn Juhl hotel in the village of Hakuba, near Nagano. 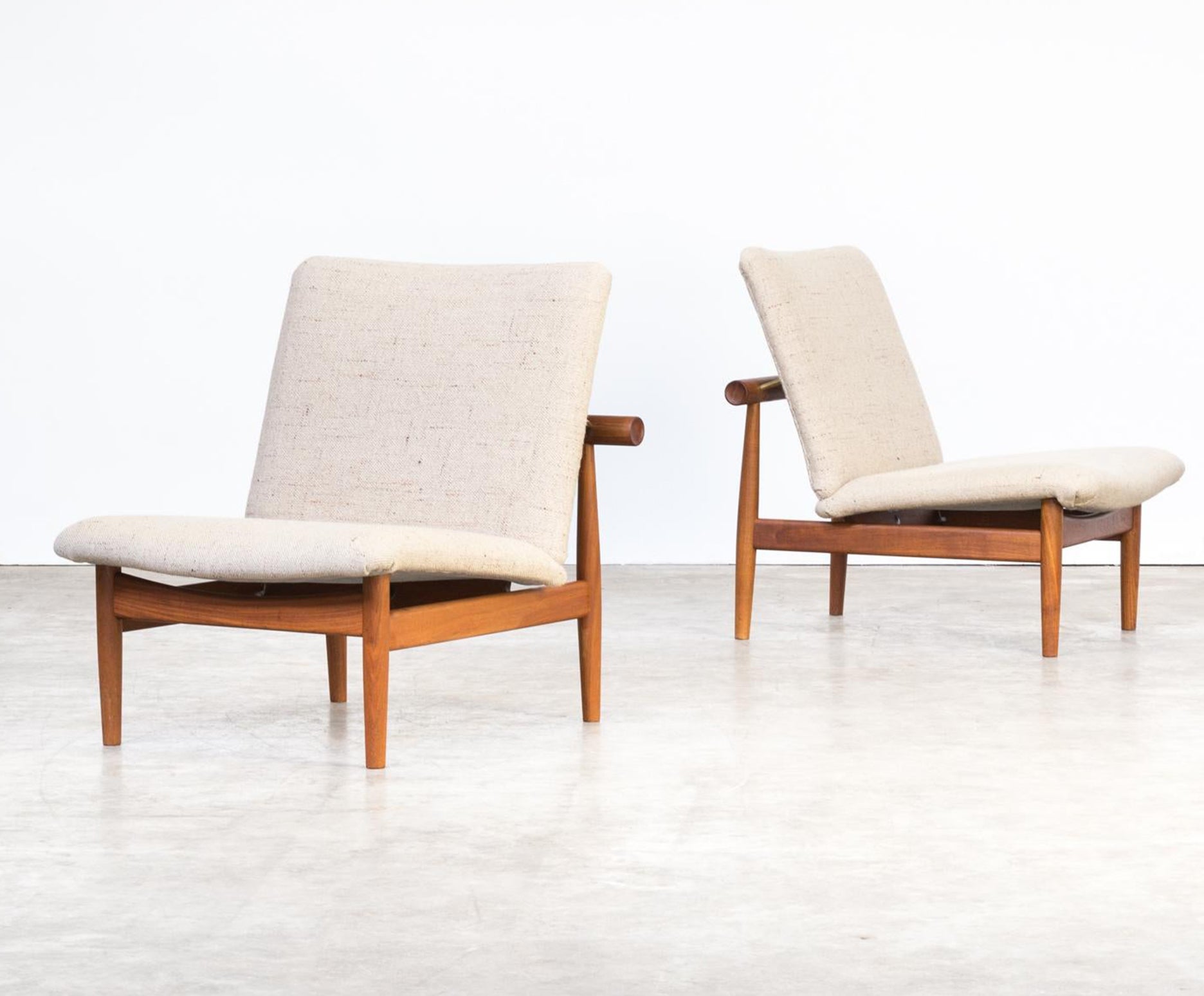 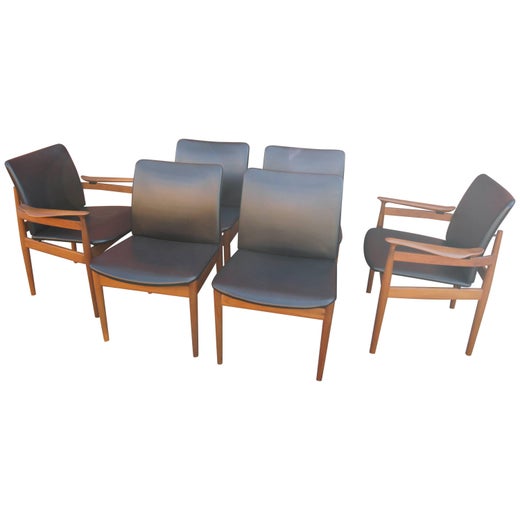 As a young man, Juhl hoped to become an art historian, but his father steered him into a more practical course of study in architecture. He began designing furniture in the late 1930s, a discipline in which, despite his education, Juhl was self-taught, and quite proud of the fact. His earliest works, designed in the late 1930s, are perhaps his most idiosyncratic. The influence of contemporary art is clear in Juhl's 1939 Pelican chair: an almost Surrealist take on the classic wing chair. Critics reviled the piece, however; one said it looked like a "tired walrus." Juhl had tempered his creativity by 1945, when the Danish furniture-making firm Niels Vodder began to issue his designs. Yet his now-classic NV 45 armchair still demonstrates panache, with a seat that floats above the chair’s teak frame.

Juhl first exhibited his work in the United States in 1950, championed by Edgar Kaufmann Jr., an influential design critic and scion of America’s most prominent family of modern architecture and design patrons. (Kaufmann’s father commissioned Frank Lloyd Wright’s design of the house “Fallingwater.”) Juhl quickly won a following for such signature designs as the supremely comfortable Chieftan lounge chair, the biomorphic Baker sofa, and the Judas table, a piece ornamented with stylish inlaid silver plaquettes.

As you will see from the offerings on 1stDibs, Finn Juhl’s furniture — as well as his lighting, ceramics, tableware and accessories — has an air of relaxed sophistication and elegance that is unique in the realm of mid-20th-century design.

1stDibs Buyer Protection Guaranteed
If your item arrives not as described, we’ll work with you and the seller to make it right. Learn More
About the Seller
4.8
Located in Los Angeles, CA
Vetted Seller
These experienced sellers undergo a comprehensive evaluation by our team of in-house experts.
Established in 1976
1stDibs seller since 2007
132 sales on 1stDibs
Typical response time: 2 hours
More From This SellerView All
People Also Browsed
You May Also Like